A magical experience awaits on this fascinating tour. Mingle with the muggles as you discover where JK Rowling found her inspiration among Edinburgh’s historic streets. Climb aboard the Hogwarts Express and visit the hit films’ most famous locations, including the Glenfinnan Viaduct. Follow in the footsteps of Harry and his classmates with a trip to Alnwick Castle, the real-life Hogwarts.

Edinburgh Castle - step across the drawbridge to discover tales of sieges, see the Scottish Crown Jewels and admire the views

It’s worth arriving at London’s Kings Cross station early so you can grab a souvenir photo at Platform 9¾. You’re not boarding the Hogwarts Express today, but a ride on a sleek Azuma is just as much fun.

It’s around 330 miles (531 km) to Edinburgh and includes stops in York, Durham and Newcastle-upon-Tyne.

On arrival in Edinburgh, it’s a short walk to your city centre hotel. Where better to start our epic adventure than the enchanting city where Harry was brought to life? It was here among Edinburgh’s majestic turrets and twisting alleyways that JK Rowling conjured up the fantastic stories about her schoolboy wizard.

Enjoy some free time before meeting your expert guide for a magical walking tour.

Led by our guide, we’ll visit spooky Greyfriars Kirkyard, where the familiar names on the tombstones include Thomas Riddell, AKA Lord Voldemort. From here, we pass by the familiar-sounding Potterrow Street and pause at Spoon café – formerly Nicolson’s – where much of the opening book, The Philosopher’s Stone, was penned.

From the first volume, we move on to the last as we arrive at the National Museum of Scotland and admire the famous clock tower of the Balmoral Hotel, where Rowling finished the final chapters of The Deathly Hallows in Room 552.

Crossing the George IV Bridge, our next stop is one of the most iconic of all – The Elephant House – where Rowling wrote many of the later Potter novels.

Our final landmark is the colourfully curved Victoria Street, whose array of colourful buildings are said to have inspired the famous Diagon Alley.

After a magical day, we return to our hotel, where we reflect on the exciting adventures still to come.

After an early breakfast, we join our coach and head north through Highland Perthshire, making our first stop in the Victorian town of Pitlochry.

Passing in the shadow of the brooding Grampian Mountains, we head west to the charming fishing village of Mallaig, where we climb aboard the real Hogwarts Express – the Jacobite Steam Train.

Chuffing gently past the delights of Morar and Arisaig, keep an eye out for familiar film locations, including Hagrid’s hut beside Loch Eilt and Dumbledore’s final resting place on the tiny island of Eilean na Moine. Eagle eyes will undoubtedly also recognise the backdrop where Voldemort stole the Elder Wand in The Deathly Hallows Part 1.

After these delights, steel yourself for the climax of the day as we cross the 21 mighty arches of the iconic Glenfinnan Viaduct. We may even pause on the span to admire the panoramic views of Loch Shiel, AKA Hogwarts Lake.

After alighting in Fort William and heading home via Tyndrum and Stirling, Potter buffs will spot plenty of other familiar on-screen locations as we pass through the wild beauty of Glen Coe and Rannoch Moor, both used for important scenes in The Prisoner of Azkaban and The Deathly Hallows Part 1.

Butterbeer might not be on the menu this morning, but we’ll still enjoy a splendid breakfast before heading out on the third day of following in our sorcerer’s famous footsteps.

This time we head south, snaking through the Borders until we reach the delights of Bamburgh. Here, we can stretch our legs on the beach and admire the stunning views of the imposing 5th-century castle.

Heading south further still, the unmistakable battlements of Alnwick Castle suddenly hove into view, sending a spellbinding shiver down our spine as we approach Hogwarts itself. This 970-year-old fortress starred as Harry’s school in the first two films, and its familiar corridors and courtyards instantly transport you to a world of wizardry.

Take the ‘Harry Spotter Tour’ and recreate some of your favourite magical movie moments, including the Inner Bailey where the Weasleys’ car crash-landed.

Who can forget the scenes at the Outer Bailey, where a young Harry and his classmates first climbed aboard their broomsticks and played Quidditch?

We’ll have plenty of time to grab a photo at the famous Lion Arch, which doubled up as the gateway to Hogwarts, before wending our way home to spend our final night in Scotland’s capital.

Our final day dawns with another excellent breakfast before we once more take to the cobbles for more bewitching sights.

Our first stop of the day is the city’s most famous landmark, Edinburgh Castle, which is rumoured to have been among the many inspirations for Hogwarts. During our guided tour of this stunning 12th-century stronghold, we’ll enjoy plenty of spine-tingling storytelling as we’re treated to legends of battle, betrayal and bloodshed amid its 900-year-old walls.

No visit is complete without a visit to the glittering Honours of Scotland, the oldest Crown jewels in Britain.

After admiring their beauty, experience the might of the Mons Meg cannon and the serenity of Edinburgh’s oldest building, St Margaret’s Chapel, before gazing across the city from the castle’s spectacular ramparts and savouring the centuries of history that lay beneath.

Further treasures await back in the city itself as we explore Edinburgh’s stunning New Town, with its exquisitely elegant crescents and handsome Georgian buildings.

More modern delights lie in store in the many fashionable boutiques and shops of George Street, where there is plenty of time to choose a fitting souvenir (or two) of our magical time in the true home of Harry Potter.

Later this afternoon, make your way to Edinburgh’s Waverley Station, where the train waits to transport you back to London. The train is scheduled to have a mid-evening arrival where this magical trip comes to an end.

This carefully planned semi-independent tour will stretch your holiday time to the max without making you feeling rushed.

A unique combination of travel by train, comfortable accommodation and quality sightseeing will give you extra time to explore Scotland in greater detail.

All the documentation you need, including your rail tickets, will be emailed to you. They are in electronic format, so all you need to do is show them on your smart device. If you prefer, you can print your documents, so you have hard copies.

Any questions or if you need your documents early - just email or call us. Weâ€™re here to help.

On tour, youâ€™ll travel independently by train to and from London. Weâ€™ll make sure you have a reserved seat, and weâ€™ll send you a comprehensive itinerary so you know whatâ€™s planned day by day.

Accommodation is provided in comfortable 3-star hotels that are just a short walk from the railway station and convenient for sightseeing and the tour departure points.

A buffet breakfast is included in the cost of the tour.

This Freestyle Train Tour has been very carefully planned. Your hotel has been selected not just for its comfort but also for its location close to the railway station as well as your sightseeing requirements.

Concise directions on how to reach your hotel will be given in your customised tour itinerary.

Will someone meet me in Scotland?

This is a semi-independent tour, so you will not be met on arrival in Edinburgh.

The hotels that are used in this package have been carefully selected to be not only a short walk from the railway station but also convenient for sightseeing and onward travel connections.

A comprehensive tour itinerary is included as part of your documentation. Each guide is personalised and provides easy to follow directions. You will also receive an Official City Guide which can be downloaded onto your smart device.

One of our travel experts is also available to offer assistance by telephone 7-days a week.

How and when will I get my train tickets?

All the vouchers and tickets will be in electronic format, so all you need to do is download them onto your smart device, and youâ€™re good to go.

If you donâ€™t have a smartphone or prefer hard copies, the documents we send are printer-friendly.

Documentation
Tour documentation including service vouchers and tickets are issued in electronic format. A smart device with IOS or Android operating systems is required. 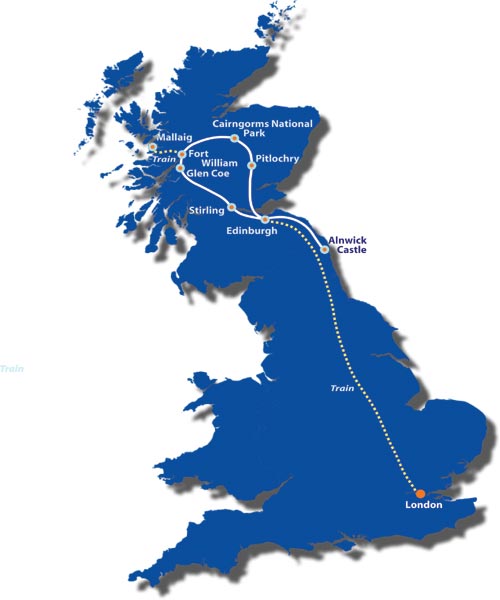 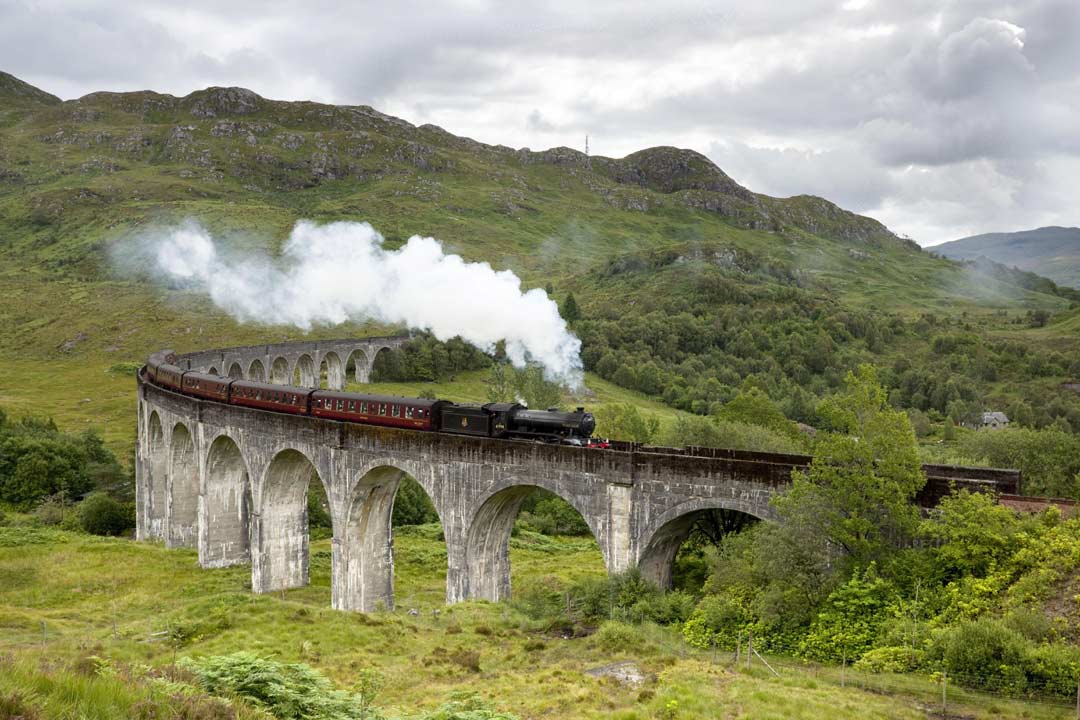 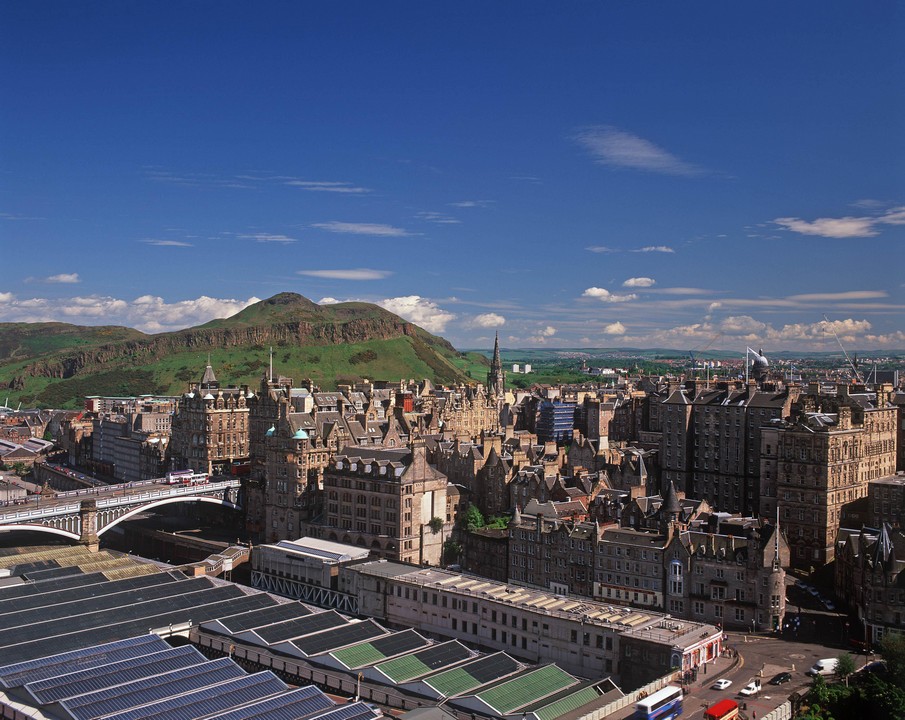