The great music hall singer and comedian, Sir Henry Lauder, was the first British recording artist to sell a million records and was described by Winston Churchill as Scotland’s greatest ambassador. He met Charlie Chaplin in 1918 and the two stars made a short film together. Scotland’s bard Rabbie Burns wrote a phenomenal amount of songs, poems and letters. As well as writing his own original lyrics and arrangements, he adapted many traditional folk songs.  Two of his most famous works are “Auld Lang Syne”, which may be the World’s most sung song, and “Ae Fond Kiss”. A few of the most notable of those who have recorded his songs include Eddie Reader and Ewen McColl. [link: https://folkways.si.edu/ewan-maccoll/songs-of-robert-burns/celtic-world/music/album/Smithsonian]

Sir James Shand MBE was an accordion player who became synonymous with the traditional Scottish country dance music he played. His signature tune was ‘The Bluebell Polka’. With his band, he travelled extensively all over the world, made numerous television and radio appearances, and sold millions of records.

In 1955 the "Bluebell Polka" reached number 20 in the charts and the band appeared on BBC's "Top of the Pops" in 1962, the only Scottish country dance band to ever do so. In celebration of his success a statue of Shand has been constructed in his home town of Auchtermuchty in Fife.

During the 1930s, Will Fyffe was one of the most successful and highest-paid music hall artistes in Britain. Despite making his song, ‘I Belong To Glasgow’ famous worldwide, Will Fyffe was actually born in the Scottish city of Dundee. As well as his success as a singer, songwriter and comedian in the music halls, he was also a popular character actor in British and Hollywood films during the 1930s and 1940s. 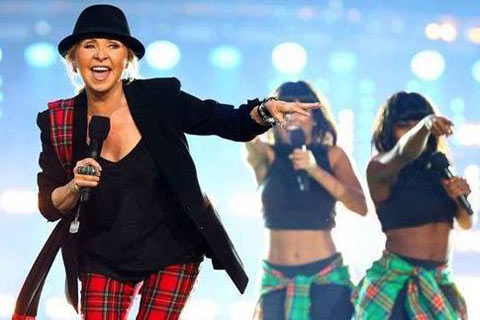 Known for her powerful voice, Lulu shot to fame in 1964 with her first hit “Shout” aged just 15. In 1969 she won the Eurovision Song Contest for the United Kingdom with “Boom Bang-a-Bang”.

During the decades that followed Lulu has appeared in numerous TV variety and special programmes including a cameo role in the hit TV comedy series “Absolutely Fabulous”.

The Pipes and Drums of the Scots Dragoon Guards

Unlikely pop stars, perhaps, but in 1972 the Pipes and Drums of the Scots Dragoon Guards reached number one in the charts with their recording of “Amazing Grace”. Not only a hit in the UK it was also top of the pops in Ireland, Australia, New Zealand and Canada too. Twin brothers Craig and Charlie Reid were born in Leith in 1962 and released their first album “This Is The Story” in 1987, followed by “Sunshine on Leith” in 1988.

Their most famous song “I’m Gonna Be (500 miles)” reached number 1 in Iceland, Australia and New Zealand, and number 3 on the Billboard Hot 100 in the United States in August 1993. It has been featured on various soundtracks including Benny and Joon, starring Johnny Depp, Grey’s Anatomy, and Pitch Perfect.

The success of the song had fans all over the world wondering about the meaning of the Scots word ‘haver’. (It means to talk nonsense).

‘The Big Yin’ as he’s known in Scotland started his career as a folk musician in Glasgow in the 1960s. He sang and played banjo, guitar and autoharp in ‘The Humblebums’ alongside his friend, Paisley-born musician Gerry Rafferty, and gained a reputation for comedic introductions and interludes during his songs.  Eventually, the songs came to take second place to the comedy and he became, and remains, one of the world’s best-loved comedians.

Billy Connolly’s friend and fellow ‘Humblebum’, Gerry Rafferty was an acclaimed singer-songwriter whose early folk-pop tunes were considered by many to be on a par with the songs of Paul McCartney. Later he formed the band Stealers Wheel with Joe Egan, and the two Paisley born musicians enjoyed worldwide success with hit songs such as ‘Stuck in the Middle with You’ and ‘Baker Street’. 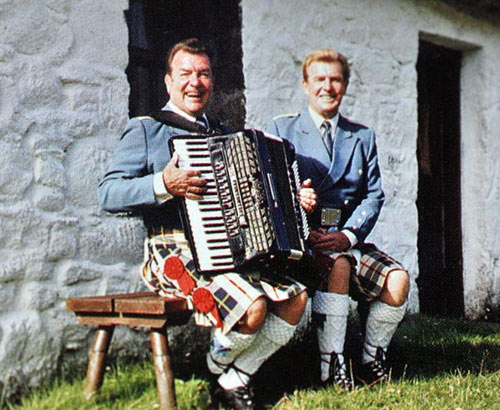 Tom and Jack Alexander had chart success and toured Canada, the United States, Australia and New Zealand throughout the 1960s and, 1970s with their traditional Scottish music played on the accordion and piano.

Their biggest selling song though was in more of a country and western vein: the brothers’ cover of ‘Nobody’s Child’, the heart-rending tale of a blind orphan, which, it is said, would bring tears to a glass eye. Allegedly it was more popular in Scotland in 1964 than any record by the Beatles.

After being featured in a television documentary that followed the young singer starting out on her career and trying to get a record contract, Sheena Easton became one of the most popular recording artists of the 1980s.  The winner of 2 Grammy awards, she has sold over 20 million records and singles worldwide in a career in which she has collaborated with Kenny Rogers, Nile Rodgers and Prince, and sung the title song on the James Bond film ‘For Your Eyes Only’.

One of the founding members of the hugely well respected and influential folk band Pentangle, Glasgow-born Bert Jansch has been cited as one of the most influential figures in British folk music and has been an influence on Jimmy Page, Nick Drake and Donovan amongst countless others.

He began to come to the public eye throughout 2017 and 2018, supporting major acts, playing at various festivals, and gaining a lot of radio airplay, but 2019 was Glasgow-born singer Lewis Capaldi’s year. His debut album ‘Divinely Uninspired to a Hellish Extent’ reached number 1 in the UK album chart in May, and stayed there for 4 weeks, while his single ‘Someone You Loved’ topped the UK singles chart for 7 weeks, also getting to number 1 in the US Billboard Hot 100 in October 2019. His 2020 arena tour was announced and sold out before his debut album was released. As if that wasn’t impressive enough, his second cousin is former Dr Who Peter Capaldi.

Singer-songwriter and folk musician Kenny Anderson, known professionally as King Creosote, has been recording and releasing music independently since 1995.  Along with Johnny Lynch, known as The Pictish Trail, he formed the label Fence Records which was located in the fishing villages of Anstruther and Cellardyke, in the East Neuk of Fife.  His prolific output currently stands at over 40 albums.  Fence Records gave rise to an informal group of musicians and singers known as the Fence Collective, who often played in small festivals around the East Neuk, and further afield.  King Creosote has collaborated with the electronica producer and musician Jon Hopkins, and their 2011 album ‘Diamond Mine’ was nominated that year for the Mercury Music Prize (losing to PJ Harvey for ‘Let England Shake’)

This multi-award-winning indie-rock band was formed in Glasgow in 2002 and has been influential on the music scene ever since. The band’s first two singles “Darts of Pleasure” and “Take Me Out” charted in several countries and earned them a Grammy nomination. In 2004 their album, “Franz Ferdinand” won the Mercury Award and another Grammy Nomination as well as the NME Album of the Year. Since then the band have released a further four albums in their own right and have toured extensively.

One of the original boy-bands this tartan-clad band created “Rollermania” in the 1970s with hit songs including “Keep on Dancing”; “Shang-a-Lang” and Bye, Bye Baby”. They reached super-star status in 1976 with chart success in the UK, North America; Japan and Australia. This popular singer and entertainer gained fame for singing traditional Scottish songs and for being the compere of the popular TV series “The White Heather Club”.

His most famous recording was  “Donald Where’s your Troosers” which was released in 1960 and reached number 37 in the UK singles charts.

It became an even bigger hit in 1989 when it found a new audience and peaked at number 4 in the charts.

As half of the Eurythmics, Annie Lennox had massive International success in the 1980s with “Sweet Dreams, Are Made of This” and “There must be an Angel (Playing with my Heart). In 1992 she embarked on a solo career enjoying hits with “Why” and “Walking on Broken Glass”. Outside music Annie Lennox is a humanitarian activist and in 2010 was awarded an OBE in recognition of her work in this field.

A “Doonhamer” (a person from Dumfries), Calvin Harris is a celebrated DJ, Record Producer and Singer. He has released five studio albums and has enjoyed hits with his singles “We Found Love”, “Summer” and One Kiss”. In 2014 he was the first artist with three songs simultaneously in the Billboard Top 10 Dance/Electronic Chart. He was also the first British solo artist to reach one billion streams on Spotify. Harris is said to have been the World’s highest-paid DJ from 2013 to 2018.

The “Wets” hail from Clydebank. Formed in 1982 they are famed for their hit single “Love is All Around” from the popular film “Four Weddings and a Funeral”. The song spent 15 weeks at the top of the British charts! Their other hits include “Wishing I was Lucky” and Sweet Little Mystery”. The original lead singer, Marti Pellow, is now a solo artist and an actor in musicals both in London and on Broadway. 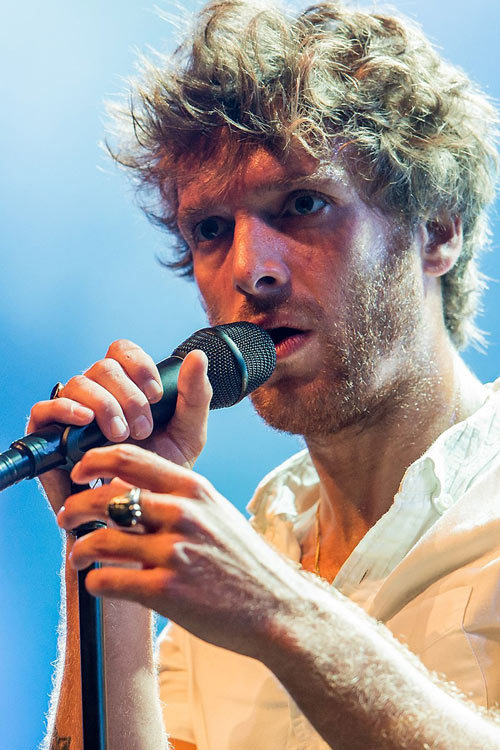 A Paisley buddy, Paolo Nutini has found international fame with his albums “These Streets”, “Sunny Side Up” and “Caustic Love”.

After moving to London and singing in a local pub radio, he started to get radio and live spots which led to supporting Amy Winehouse and KT Tunstall.

Currently, he is considered by many to be one of Scotland’s most prominent musicians having played Carnegie Hall in New York, The Montreux Jazz Festival and enjoying sell-out audiences during his World-wide tours.

A contestant on the talent show Britain’s Got Talent in 2008, Susan chose to sing “I Dreamed a Dream” from the musical Les Miserables and the rest, as they say, is history. Although she did not win the contest, she has become a successful recording star who has made numerous TV appearances, including America’s Got Talent, and released eight albums.

This popular folk duo comprised of Roy Williamson and Ronnie Browne. In 1974 they released a single called “Flower of Scotland” which has become Scotland’s unofficial national anthem being sung with gusto at sporting events, particularly rugby and football.