Icons and Symbols of Scotland 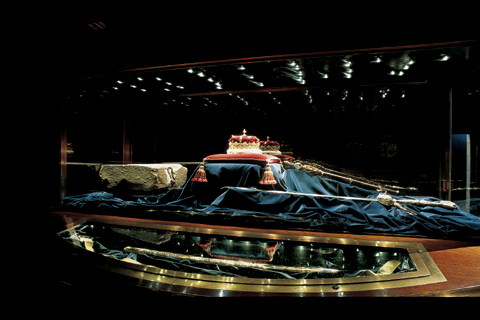 The Scottish Crown Jewels, known as the Honours of Scotland, are the oldest regalia in the British Isles. They comprise a crown, a sword and a sceptre, all of which date from the 15th and 16th centuries.

It is believed that the Silver Sceptre was a gift from Pope Alexander VI in 1494 to King James IV. The Sword of State is another Papel gift, this time from Julius II, who commissioned Michaelangelo to paint the Sistine Chapel.

The Crown of Scotland was made for King James V in 1540. It was refashioned from a damaged and lighter crown by an Edinburgh goldsmith. The Honours were first used as regalia in the Coronation of Mary, Queen of Scots in 1543. She was a mere nine months old.

After the union of Scotland and England in 1707 the new United Kingdom Parliament sat in London,so the Honours were locked away in Edinburgh Castle. After a campaign by Sir Walter Scott, they were re-discovered in 1818 still in their protective linen covers.

Together with the Stone of Destiny, these symbols of Scottish nationhood are on permanent public display in the Crown Room at Edinburgh Castle.

Wrapped in legend this ancient symbol of the Scottish monarchs has played an important part in the inauguration of Scottish Kings for centuries. Experts believe that the stone was first used at the Coronation of Kenneth MacAlpin, the Ninth Century.

In 1296 King Edward I of England captured the stone and had it taken to Westminster Abbey. It was placed underneath the wooden chair on which all subsequent English monarchs were crowned,

On Christmas Day, 1950 a group of Scottish students liberated the stone and returned it to Scotland. After a nationwide search, the stone was found on the altar of Arbroath Abbey and returned to London. It was last used in the Coronation of Queen Elizabeth in 1953.

The British Government returned the Stone of Destiny to Scotland in 1996 where it is on display. 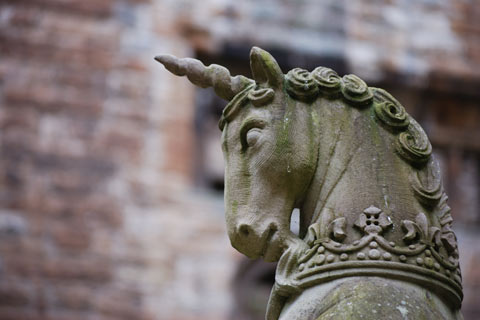 Scotland’s national animal is the Unicorn. According to Celtic folklore, the unicorn represented purity and innocence together with supremacy and power.

The mythical creature appeared on the Scottish Royal Coat of Arms in the 12th Century. In 1603  King James VI of Scotland became King James I of England and Ireland. To demonstrate that the countries were united he replaced one of the unicorns with a lion, the national animal of England. As the unicorn is the strongest of all animals, it appeared on the crest in a chain to symbolise the power of the King.

The feileadh mor was a longer untailored garment, around five metres in length, which was gathered and then belted at the waist to provide cover for both the upper and lower body. From the waist down, the feileadh mor resembled a modern kilt while the remaining material above the waist was draped over the shoulder and pinned there. This upper portion could be arranged in a variety of ways around the shoulders according to the demands of weather, temperature or freedom of movement required. At the end of day, the belt could be unbuckled to transform the feileadh mor into a warm covering for the night. The Gaelic plaid actually means ''blanket''. 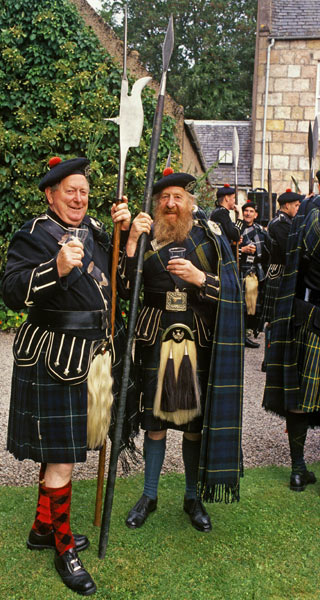 The feileadh mor was simplified by disposing of its top half, leaving the belt and the skirt below. The resulting creation became known as the feileadh beg, or ''little kilt''. This was reputedly at the behest of an Englishman running an ironworks at Invergarry who felt his kilted employees needed a greater freedom of movement to do their work. Whatever the impetus for change was, the kilt now became a tailored garment with sewn-in pleats, making it neater and far more easy to put on and wear. The upper half of the big kilt evolved into the separate plaid (or sash) which is now worn at more formal events.

Following the Jacobite defeat at Culloden in 1746, the kilt and other aspects of Highland dress were outlawed and its continued survival during these years was largely due to its adoption by Highland regiments serving with the British army.

Highland regiments still wear the kilt on regular basis (although no longer into battle) but it is not an everyday article of dress in Scotland. Visitors are more likely to see kilt-wearers at formal celebrations such as weddings and at Highland Games or similar gatherings. And although the kilt is typically regarded as being Highland dress, more kilts are now worn in the Lowland cities than in the Highlands.

Modern kilts have up to eight metres of material which is thickly pleated at the back and sides, with the pleats stitched together only at the waistband. Fashion designers have also tried to update the kilt and make it appeal to a wider audience by using non-tartan designs such as camouflage and material such as leather or tweed. 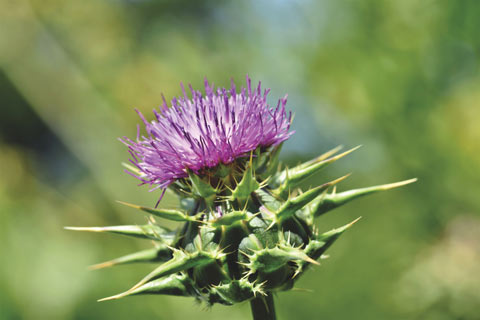 But why is it that such a proud people as the Scots should choose a humble weed as its national symbol? In truth, no-one knows. There is a legend which relates how a sleeping party of Scots warriors were almost set upon by an invading band of Vikings and were only saved when one of the attackers trod on a wild thistle with his bare feet. His cries raised the alarm and the roused Scots duly defeated the Danes. In gratitude, the plant became known as the Guardian Thistle and was adopted as the symbol of Scotland.

Sadly, there is no historical evidence to back up the tale, and in fact, there's even confusion as to the type of thistle that we see represented everywhere. There are many species of thistle and the spear thistle, stemless thistle, cotton thistle, Our Lady's thistle, musk thistle and melancholy thistle have all been suggested as possible candidates.

The thistle as a symbol

Whatever its origins, the thistle has been an important Scottish symbol for more than 500 years. Perhaps its first recognisable use was on silver coins issued in 1470 during the reign of James III and from the early 16th century, it was incorporated into the Royal Arms of Scotland. Scotland's premier Order of Chivalry is The Most Ancient and Noble Order of the Thistle. It was established in 1687, and its members wear a collar chain whose links are made of golden thistles. The Knights and Ladies of the Thistle also wear a breast star which bears the thistle emblem. The motto which is regularly associated with the Thistle is, Nemo Me Impune Lacessit - ''no-one provokes me with impunity''. 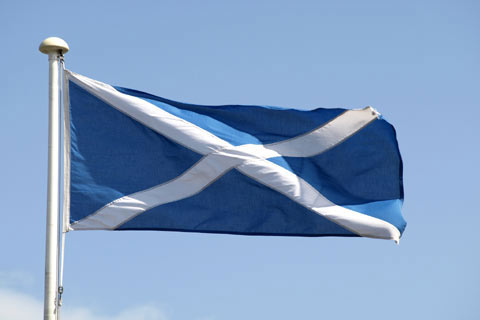 This flag is part of Scotland's special identity. The Scottish flag or `saltire' is derived from the cross of St Andrew, Scotland's patron saint. Its adoption is said to date from a battle, some say in 756 between a combined force of Picts and Scots against invading Northumbrians under their leader Athelstane. King Angus I of Scots prayed to St Andrew and a vision of the cross of St Andrew was seen, white against a blue sky. This helped the Scots to victory. You will see the flag flying in plenty of locations throughout the country, as Scotland's own symbol, notably at Athelstaneford, near Haddington, East Lothian, site of the ancient battle.

The cross is also part of the Union Flag, a symbol of the United Kingdom.

The Lion Rampant flag was chosen by William I of Scotland for his standard. It shows the red lion standing on its hind legs surrounded by a border of fleurs-de-lis.