The recorded history of Scotland begins in the 1st century AD when the Romans invaded Britain. The Romans added southern Britain to their empire as the province Britannia. They were unable, however, to subdue the fierce tribes in the north. To keep these tribes from invading Britannia, Emperor Hadrian had a massive wall built across the island from sea to sea. The Romans called the land north of the wall Caledonia, and they called the people Picts--from the Latin pictus, meaning "painted"--because they painted their bodies. Parts of Hadrian's Wall still stand on the Scottish border.

In the 5th century Celtic immigrants from Ireland, called Scots, settled north of the Clyde. The Scots were already Christians when they left Ireland. In the next century, St. Columba converted the king of the Picts to Christianity. In the 9th century Kenneth MacAlpine, king of the Scots added the Pictish kingdom to his own. In about the 10th century the land came to be known as Scotland.

After the Normans conquered England in 1066, many Anglo-Saxons from England settled in the Lowlands of Scotland. Here the Scots gradually adopted English ways. Feudalism was established, and the chiefs of the clans became nobles. Towns grew, trade increased, and Scotland prospered.

In 1290 Margaret, heiress to the throne died. Thirteen claimants contested the Crown. Edward I of England claimed the right to bestow it and made John de Baliol King. When Edward asked de Baliol for help against the French he entered into an alliance with France instead. For 260 years Scotland held to this so-called "auld alliance" with England's enemy.

Edward crossed the border in 1296, took John de Baliol prisoner, and proclaimed himself king of Scotland. To symbolise the union he carried off the ancient Stone of Scone, on which Scottish kings had long been crowned, and placed it in Westminster Abbey where it lay beneath the coronation chair.

The Scots rose again. Led by William Wallace, they routed the English at Stirling Bridge in 1297 and pursued them across the border. The next year Edward returned and inflicted a disastrous defeat on the Scots at Falkirk. Wallace was later captured and executed, and the English hung his head from London Bridge. This part of the history of Scotland was the foundation for the film "Braveheart".

The Scottish spirit was still unbroken, and the Scots soon found another great champion in Robert the Bruce. The last great battle in the war for independence was fought in 1314 at Bannockburn, near Stirling Castle. There Bruce inflicted a disastrous defeat on superior English forces led by Edward II. In 1328 Edward III formally recognised Scotland's independence.

In the later Middle Ages, Scotland suffered from weak kings and powerful nobles. For two centuries there was a constant struggle between the Crown and the barons. Border clashes with England also continued. James IV of Scotland married Margaret, daughter of Henry VII of England, in 1503. When Henry VIII went to war with France in 1512, however, James IV invaded England. He fell, "riddled with arrows," at Flodden Field in the last great border battle (1513).

James V died brokenhearted after his army had been slaughtered at Solway Moss (1542). The throne went to his infant daughter, Mary Stuart. 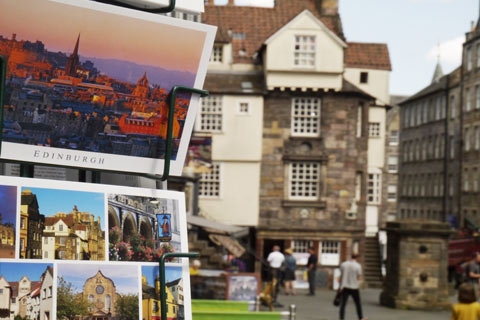 Meanwhile, the Protestant Reformation had swept across Europe and into England. Scotland was still a Roman Catholic country. Its young queen, Mary Stuart, was in France when John Knox returned home to Scotland from Geneva, Switzerland. Knox was a follower of John Calvin, one of the leaders of the Reformation. With fiery eloquence, he spread Calvin's Protestant doctrine. Knox and others drove Mary out. In 1560 Scotland's parliament adopted a confession of faith drawn up by Knox and established the Church of Scotland on a Presbyterian basis.

When Mary returned to Scotland in 1561, she ruled the country successfully, at first. However, two unsuccessful marriages and continual struggles with the Scottish nobles took their toll. She was imprisoned then forced to abdicate her throne. She escaped, fled to England, where Queen Elizabeth I made her a prisoner and finally had her executed.

Mary Stuart's son, James VI, was brought up as a Presbyterian. When Queen Elizabeth of England died in 1603, James inherited the throne of England. In England he was called James I. The two nations were thus united under a single king, but Scotland remained a separate state with its own parliament and government.

England repeatedly tried to impose the Anglicans' episcopal form of worship and church government on the Scottish kirk. The Scots took up arms against Charles I. When civil war broke out in England, they aided the Puritans against the king. After Oliver Cromwell executed Charles I without consulting the Scots, however, the Scots welcomed Charles's son as Charles II. Cromwell then marched into Scotland and imposed his rule. When Charles II was restored to the throne, persecution of Presbyterians continued. 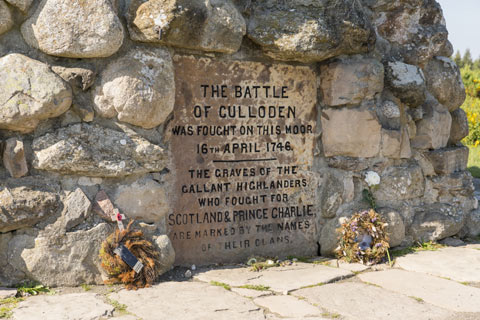 Finally, after James II of England had been driven from the throne, Presbyterianism was firmly established as Scotland's national church. The Highlanders long remained loyal to the exiled Stuarts. In 1715 they attempted to restore the house of Stuart to the throne; James Stuart, known as the Old Pretender, was proclaimed James III. In 1745 they supported his son, Charles Edward, known as the Young Pretender and Bonnie Prince Charlie. The Young Pretender's quest for the throne ended in 1746 at the battle of Culloden. The Jacobite armywas routed by the government troops, under the command of the Duke of Cumberland.

The age-old rivalry between Scotland and England ended formally in 1707 when the parliaments of both nations agreed to the Act of Union. This act merged the parliaments of the two countries and established the Kingdom of Great Britain. From that time on, the history of Scotland combines with that of the rest of the United Kingdom, although the legal and education systems remained separate. Scotland now had free trade with England and the colonies. As Britain's empire expanded, the Scots played a significant part in its development.

The 18th century became Scotland's most creative period. Known as the Scottish Enlightenment, it made Edinburgh one of the intellectual powerhouses of Europe. David Hume won world fame in philosophy and history, Adam Smith in political economy, and Robert Burns in poetry. In the next generation, Sir Walter Scott made the land and history of Scotland known throughout the world. During this period the Scots were also pre-eminent in establishing the fledgeling colonies in America, Canada and Australia. 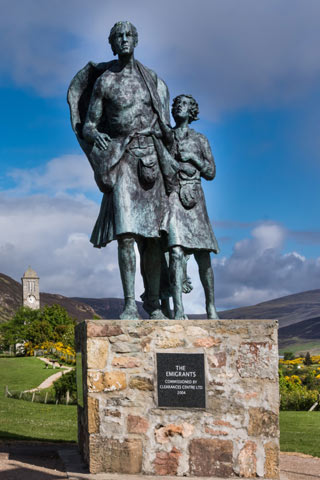 By the late 18th Century the lowlands of Scotland were becoming increasingly urbanised, in contrast to the highlands which remained primarily rural. The Clan Chiefs, who traditionallycontrolled the land in the highlands, embarked on a series of improvements. They found it far more efficient to have sheep on their land rather than people. Known as the Highland Clearances, tenants were forcibly evicted from their crofts and small-holdings. Many highlanders moved to Glasgow or chose to emigrate to the New World to rebuild their livesfar from Scottish shores.

In the 19th Century, trade flourished with Scotland importing tobacco and sugar amongstother commodities. The spinning and weaving of cotton was an important industry, particularly in the west of the country, until the American Civil War cut off supplies almostovernight. Later heavy industry flourished including shipbuilding, locomotive building and iron production. Glasgow became known as the second city of the Empire and for generations, the term “Clyde Built” was synonymous for industrial quality.

When World War I broke out in 1914, Scots flocked to support the war effort, making up to 15% of the entire British Army. Also, warships were built on the Clyde and ammunitions made in the south of the country.

During the inter-war years, many of the traditional heavy industries went into decline as the effects of the depression were felt. Unemployment soared with as many as 3 in 10 of the workforce being laid off and it is thought that some 400,000 Scots chose to emigrate in search of new opportunities overseas during 1921-31.

Scottish Industry got a boost during World War 2 with renewed demand for warship construction, aircraft engines and ammunition. After the war, the Labour Government introduced the National Health Service, which dramatically improved the health of the nation. In addition, urban regeneration cleared slums and created new housing estates with modern housing.

By the 1970s oil was discovered off the coast of Scotland and a new industrial revolution started in the construction of oil rigs, refineries and support services. Aberdeen, on the east coast, became the oil industry capital and a new sense of optimism permeated the country. 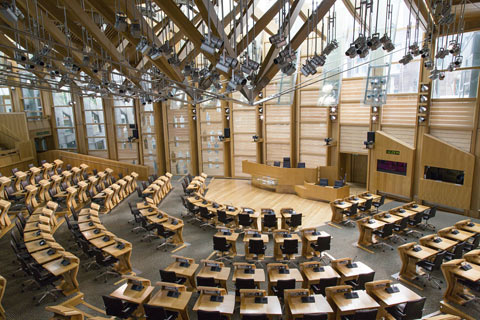 In the post-war years, there has been an increasing call for more political independence for Scotland. In 1979 a referendum was held for the reintroduction of the Scottish Parliament. The vote was lost when the minimum number of votes required was not reached. When Tony Blair’s Labour Government gained power at Westminster in 1997, a further referendum was held. This time the vote succeeded and the Scottish Parliament sat for the first time in 300 years. A new Parliament building has been constructed, close to the Palace of Holyroodhouse, which opened in 2004.

In 2011 the Scottish National Party secured 69 of the 129 seats in the Scottish Parliament giving it overall control. As a result, a referendum on Scotland’s independence was negotiated with the Westminster Government. The poll was held on 18 September 2014 with the result being 55.3% of the votes being against independence.

The decision, in June 2016, for the UK to leave the European Union has resulted in further calls for a second referendum on Scottish independence.