Scotland's canals flow through urban settings, wild highland scenery and quiet pastoral countryside. Spanning more than two centuries, they are the locations for impressive engineering marvels from the early days of the industrial revolution to the present day.

It's no wonder that locals and visitors flock to explore Scottish canals and waterways. So whether you plan a gentle towpath walk or want to quicken the pace with an energetic run or bike-ride, you're sure to enjoy a different perspective on Scotland's varied landscapes.

How many canals in Scotland? Scotland has five main canals that were built between 1768 and 1822 to transport coal and iron. In central Scotland there's the Union and Forth & Clyde Canals.

There is also the Monklands Canal, but it was mainly consumed by the building of the M8 motorway and only small parts survive with water today.

In the Highlands, the Caledonian Canal sweeps majestically through the Great Glen linking Fort William with Inverness and, to the west, The Crinan Canal, is known as the "World's most beautiful shortcut". 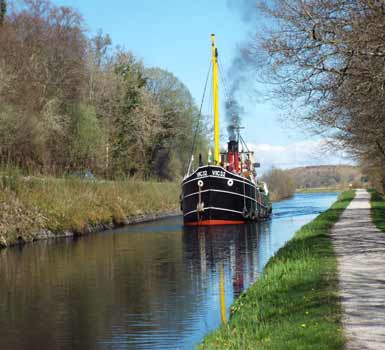 The busy canal centre at Edinburgh Quay sits in the shadow of Edinburgh Castle. Just a short walk from bustling Princes Street, the Union Canal is the most accessible of Scotland's waterways. It's a lovely place to relax and watch the colourful narrow-boats come and go. Once hidden away from public view, the Union Canal dates from 1822. It was built so the people of Edinburgh could access cheap coal from the west of Scotland.

The 32-mile route includes the dramatic Avon Aqueduct, Scotland's longest and tallest as well as the 631m long Falkirk Tunnel, which was cut through solid rock because the landowner didn't want to see the canal from his home, Callander House.

After falling into disrepair, the Union Canal was closed to navigation in 1965. The good news is that it was re-opened in 2001 as part of the Millennium Link project so now it's possible to sail from the centre of Edinburgh all the way to Falkirk. If you'd like to take a boat trip head to the Linlithgow Canal Centre where you can enjoy a short cruise to discover the historic town of Linlithgow or take an extended excursion to admire the views from the Avon Aquaduct or see the impressive Falkirk Wheel boat lift.

Fancy following the lead of Tim and Pru?

Well, you can skipper the 12 passenger hire-boat, Leamington, on your very own Great Canal Journey. It's a fantastic way to enjoy the experience of sailing Scotland's waterways and, if you're a novice don't worry, full instructions will be provided before you set sail.

Falkirk Wheel and The Kelpies One of the exciting aims of the Millennium Link project was to link the Union Canal with the Forth and Clyde Canal at Falkirk using the only rotating boat lift in the World.

The statistics are impressive; each gondola weighs 600 tonnes and contains half a million litres of water. As the gondolas are counterbalanced, each rotation uses the same amount of energy as boiling eight domestic kettles. Overlooking the Forth and Clyde Canal are The Kelpies, two massive horse head statues designed by the Glasgow-based artist, Andy Scott.

Standing 30 m (100 ft) tall the statues are a tribute to the working horses that pulled barges along the canal and worked in the surrounding farmland.

The Kelpies are the centrepiece of The Helix, a popular eco-park that connects local communities through a network of pathways and canal-side walks.

Forth and Clyde Canal History Work started on a canal linking the Rivers Forth and Clyde in 1768, but after nine years of construction, the funds ran out, and work was halted. It wasn't until eight years later when the Government gave the company a grant of £50,000 from the sale of surrendered Jacobite Estates that the canal could be completed.

In 1790 work was completed from sea to sea and the canal opened for trade. The Forth and Clyde Canal route is 35 miles long and flows from Grangemouth in the east to Bowling in the west through some of Scotland's most populated areas.

The Glasgow terminus of the canal is Spiers Wharf, a development of warehouses not far from the city centre which has been converted into homes, offices and creative spaces. At only nine miles long the Crinan Canal has a scenic location, so much so it's known as "Britain’s most beautiful shortcut”. It was opened in 1801 and was built to save shipping a treacherous 100-mile journey around the Mull of Kintyre.

An important date in the Crinan Canal history was 1847 when Queen Victoria and her family sailed through the canal aboard the Royal Yacht Victoria and Albert. As the story of The Queen’s scenic journey spread thousands of tourists flocked to the area to see for themselves the beauty along “The Royal Route” and to enjoy a steamer cruise through the canal. 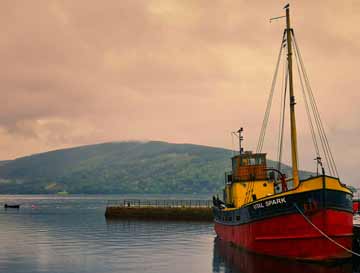 Although it is used mainly by pleasure craft today, a common sight in years gone by were Puffer boats on the Crinan Canal. These little boats were designed so they could transit the Crinan Canal and were ubiquitous in the waters of Western Scotland carrying cargo between the islands and west coast ports.

The Vital Spark was a fictional Clyde puffer boat created by author Neil Munro. His short stories about the crew and their adventures were published by a Glasgow Newspaper in 1905. They proved so popular that they were combined into a successful book. Later BBC Scotland turned the stories into a much-loved TV series.

One of the actors, John Grieve who played the engineer Dan MacPhail, featured in a short musical film called Highland Voyage where he sang The Crinan Canal Song: “The Crinan Canal for me

The Crinan Canal for me.”

Perhaps, the Queen of Scotland’s canals is The Caledonian Canal which combines four natural lochs with man-made canals to create a coast to coast waterway that stretches 97 km (60 miles) in length. The channel flows through the Great Glen linking Fort William in the south to Inverness in the north.  You can discover more about the area in our Great Glen and Caledonian Canal Guide.

Who designed the Caledonian Canal? The canal was devised to allow ships, including Royal Navy warships, safe passage by avoiding the treacherous journey around the north of Scotland through the Pentland Firth.

The route was first surveyed by James Watt in 1773, but it took until 1803 for the famous Scottish engineer, Thomas Telford, to be asked to manage the project. It was thought that it would take 7 years to build. After completing the Caledonian Canal, Telford went on to build St Katherine’s Dock in London, the famous Menai Suspension Bridge in Wales and the Pontcysyllte Aqueduct which was awarded UNESCO World Heritage Status in 2009.

This popular visitor centre overlooks the famous canal locks in the centre of the village which is a stop on the Loch Ness Explorer one-day tour from Edinburgh.

Now is the time to book your 2021 Scottish holiday with Scottish Tours!

Does the thought of a visit to Scotland float your boat?

Book one of our fabulous tours to experience Scotland’s natural beauty and famous landmarks for yourself.