Exploring the Great Glen of Scotland

Slicing through the Highlands of Scotland from Fort William in the south to Inverness in the North the Great Glen offers an impressive landscape that includes Britain’s tallest mountain, four majestic lochs, ancient battlefield sites and even an elusive monster.

If you are spending time in the Scottish Highlands, then you’re almost bound to enter the Great Glen at some point during your travels.

Discover what to see and do with this helpful insiders guide.

Where is the Great Glen in Scotland?

The glen cuts a swathe coast to coast through Scotland linking the West Highland town of Fort William and Inverness, on the Moray Firth. The length of the Great Glen is 62 miles (100 km) and forms part of the popular A82 route that links Glasgow with Inverness via Fort Willam.

What’s the history of the Great Glen? 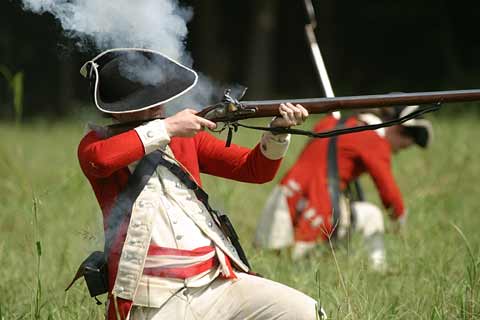 It’s believed the Great Glen was created 380 million years ago when two Tectonic plates collided to create a vast rift valley that is so big it can even be seen from space. During the Ice Age, glaciers covered the valley that, over time, created the picturesque lochs we see today.

After the 1715 Jacobite rebellion, the British Government built three forts in the glen to defend it – Fort William; Fort Augustus and Fort George. The garrisons were connected by a newly constructed military road designed to allow troops to move swiftly if trouble arose. Sadly, little of the original forts survive today.

Caledonian Canal and the Great Glen

For much of the trip through the Great Glen, we’ll be accompanied by the Caledonian Canal. It was built by the famous engineer, Thomas Telford who ingeniously incorporated the three freshwater lochs into the design, so only 22 miles of its 60-mile length are the traditionally cut canal.

When it opened in 1822, the canal allowed ships to reach the North Sea from the Atlantic Ocean without sailing through the treacherous waters of Scotland’s north coast. Today the canal is used mainly by pleasure boats. 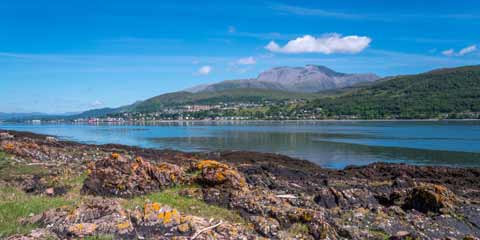 Our journey starts in Fort William, which has a picturesque setting on the banks of Loch Linnhe, one of the four Great Glen lochs. Known by locals, affectionately, as “The Fort” it is surrounded by some of Scotland’s most inspirational landscapes including Glen Coe and Ben Nevis.

Promoted as the “Outdoor Capital of Britain”, Fort William is the venue for the Downhill Mountain Biking World Cup and the starting point of The Great Glen Way long-distance walking route.

For many people, the highlight of their visit to Fort William is the moment they step aboard the vintage carriages of the Jacobite Steam Train for a trip on the picturesque West Highland Line. Just like the Hogwarts Express, it crosses the famous Glenfinnan Viaduct, known to millions of fans as the Harry Potter Bridge. 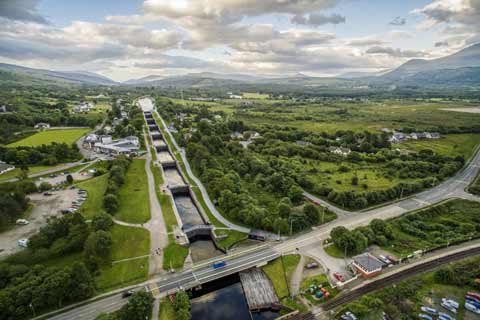 A popular place to stop is at Banavie, just three miles outside Fort William. Here a series of eight locks lift the Caledonian Canal 64 ft (19.5 m) in less than a half-mile.

This flight of locks is called Neptune’s Staircase and makes a punishing start for the sailors starting their transit of the canal.

A short drive away sits towering Aonach Mhor, one of the mountains of the Nevis Range. A popular diversion is to take the gondola ride 2,000 feet (609 m) up the mountain for spectacular views. 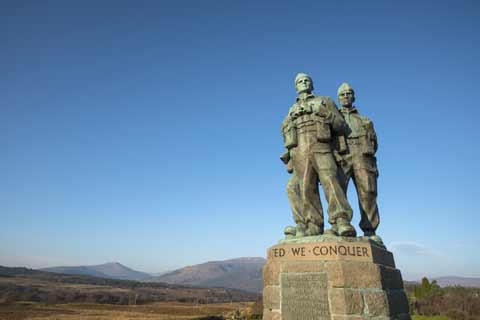 Outside the village of Spean Bridge, we come across the Commando Memorial, built to commemorate the fearless soldiers who trained in this inhospitable area during World War 2.

Making a stop here is rewarded with one of the very best views of Ben Nevis, the tallest mountain in Britain.

As you look at the mountain give a thought to Henry Alexander who, in 1911, drove a Model T Ford all the way to the top to promote his father’s car dealership.

Well of the Seven Heads 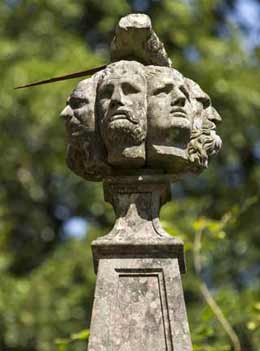 After a drive along the fjord-like banks of Loch Lochy comes Invergarry. Look out for the “Well of the Heads” memorial, it commemorates a particularly gory event involving Seven Brothers and, unlike the Hollywood musical, this story doesn’t have a happy ending!

It came about during a feud amongst members of the Clan MacDonald. In 1663 two brothers were murdered. The seven brothers who were the main suspects were tracked down, and as vengeance, they were killed, and their heads severed.

After being washed in a well not far from the village, the seven heads were presented to the Clan Chief at Glengarry Castle as evidence that justice had been carried out. 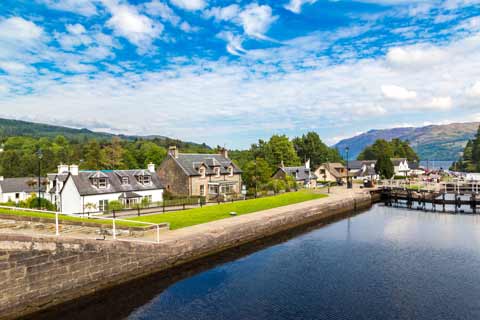 It’s said that Loch Ness contains more water than all the lakes of England and Wales combined making it the largest stretch of water, by volume, in the British Isles.

The first village on the loch that we come to is Fort Augustus, a delightful community that sits at the southern end of the loch. This is where the Caledonian Canal descends through a flight of five locks to reach Loch Ness

If you want to know more about the canal and its history, then a visit to the Caledonian Canal Visitor Centre is well worthwhile.

There is only one island on Loch Ness, known as Cherry Island or Eilean Muireach and it can be found just a short distance from Fort Augustus. Actually, it’s not natural, but man-made. Dating from the Bronze Age, it’s called a “crannog”, and it was built to provide refuge to local people from attack.

The ruins of this massive fortress sit overlooking the deepest part of Loch Ness. One of Scotland’s most famous castles, Urquhart has witnessed many battles and conflict its 1000 year history. 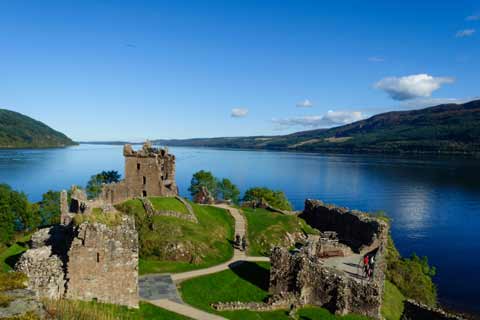 Although there had been a fort here since the Iron Age, it was King Edward 1 of England who developed it to control this rebellious part of Scotland.

It was retaken by the Scots then, after a bloody siege, captured by the English again. The castle finally came under Scottish control in 1306 after Robert the Bruce became Scotland’s King.

Over the centuries Urquhart Castle changed hands many times, often as a result of a ferocious battle. In 1692 the British Government ordered that the castle be blown up in case it fell into Jacobite hands. The romantic ruins we see today provide the perfect subject for a much-liked post on social media!

Many visitors are drawn to Loch Ness by the possibility of catching a glimpse of Nessie, the elusive Loch Ness Monster. Whether she is a relic from a prehistoric age or a myth dreamt up by tourism executives, we’ll leave for you to decide.

The bustling village of Drumnadrochit is, without doubt, the epicentre of the Nessie phenomenon with no less than two themed exhibitions competing to draw in tourists wanting to know more about the monster. 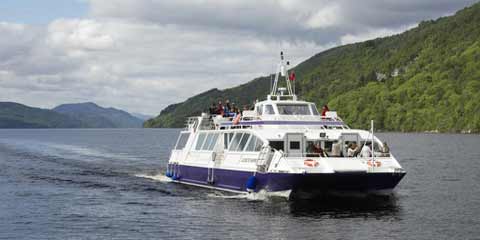 If you want to get the chance to be up-close and personal with Nessie then taking to the water on a cruise is well worth considering. Short cruises are available from several points along the loch-side, and it’s possible to enjoy a longer coach and cruise tour from Inverness if you’re not driving.

Our look at the Great Glen ends at Inverness, the Capital of the Highlands. Inverness is a modern, sophisticated city that makes an excellent base to discover more of the beautiful Highlands region with sightseeing tours available to the Isle of Skye or the stunning Northern Highlands. 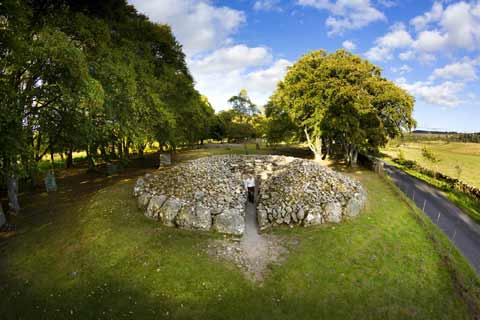 During your stay here there are many attractions to explore including Culloden Moor, where the dream of Bonnie Prince Charlie’s claim on the British Crown came to a violent end in 1746. It was the last battle ever fought on British soil.

Nearby is Clava Cairn, a prehistoric burial site where the split stones are said to have been the inspiration for “Craigh Na Dun” in the popular Outlander TV series.

Inverness sits on the Moray Firth which is home to several pods of Bottlenose dolphins. The best place to view them is at Chanonry Point which is one of the stops on the popular Highland Experience Tour.

It’s easy to experience the many attractions of the Great Glen with one of our Scotland tours from Edinburgh, Glasgow and Inverness.

Here at Scottish Tours, we take great pride in delivering award-winning tours that will introduce you to the history and beauty of the Scottish Highlands.