No visit would be complete without exploring some of the UNESCO World Heritage Sites in the UK. There are so many to choose from, and they are spread throughout the country.  You are never too far away from enjoying a magical exploration of Britain's colourful past.

What is a UNESCO World Heritage Site?

The sites included on the World Heritage List have been identified as being exceptional cultural and/or natural places that are of significant importance to all the peoples of the World.

The World Heritage Convention was adopted by UNESCO in 1972 and sites are selected by a committee made up of 21 member states that have ratified the convention.

How many World Heritage Sites in the UK?

There are currently 32 UNESCO World Heritage Sites in the United Kingdom and British Overseas Territories. There are 19 sites in England; 6 in Scotland; 3 in Wales;1 in Northern Ireland and 4 in overseas territories. One site straddles the English/Scottish border so is counted twice.

Here is a look at some of our favourite World Heritage Sites. 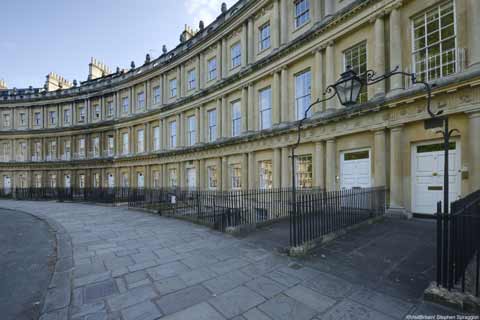 Seek out Royal Crescent, a stunning sweeping curve of 30 terraced houses built between 1767 and 1775 in the Regency style. Equally magnificent is Queen Square, where Jane Austen lived, the Circus and Pulteney Bridge which spans the River Avon.

Bath Abbey, which dates from the 7th Century, boasts impressive stained-glass windows and golden-coloured stone columns. It's well worth a visit.

The supposed health benefits of the Bath's hot springs have been known for millennia, but it took the Romans to create a luxurious bathing complex in AD75. When you visit the ancient Roman Baths and Pump Room, it's possible to see the warm bubbling pools and saunas where legionnaires once bathed and relaxed centuries ago.

Frontiers of the Roman Empire

Shared by Scotland and England this listing recognises the importance of the Antonine Wall in Scotland and Hadrian's Wall in England both of which were built during the Roman occupation.

The Romans invaded Britain in 43 AD, and by 80 AD they had reached Scotland. They built a series of forts across the country, but their attempt to quell the wild Scots, failed and they retreated back into England. 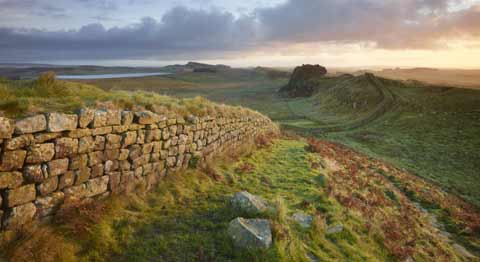 In 123 AD Emperor Hadrian decided to mark the edge of the Roman Empire by building a wall that stretches the width of England from coast to coast. Today we can walk along the wall and visit the remains of forts and towers that guarded the wall.

Around 20 years later the Romans decided to invade Scotland once more. This time the emperor was Antoninus, and he had a wall constructed across central Scotland between the Rivers Forth and Clyde. Called the Antonine Wall it's thought that there were some 7,000 soldiers stationed along its length. After 40 years the Romans retreated once more, frustrated that their attempts to control the north of Britain had been thwarted.

Situated on the River Mersey, Liverpool became a major port from where some nine-million emigrants left bound for the New World in the 19th Century. In darker days the port also played a significant role in the trans-Atlantic slave trade.

To experience the city's maritime heritage, take the famous "Ferry across the Mersey", where the views include the Cunard Building, Liver Building and Port of Liverpool Building, collectively known as The Three Graces. The Albert Dock area has been redeveloped and now include the Maritime Museum as well as the Tate Liverpool.

Famous for football take a trip to Anfield to discover the story of Liverpool FC, one of the country's most popular teams or arch-rivals, Everton, who play at Goodison Park.

The Beatles are probably the city's most famous sons. It's possible to walk in the footsteps of The Fab-Four by visiting the legendary Cavern Club. Fans can trace their story at The Beatles Story, before visiting some of the places featured in their hit songs including Strawberry Fields and Penny Lane.

Old and New Towns of Edinburgh 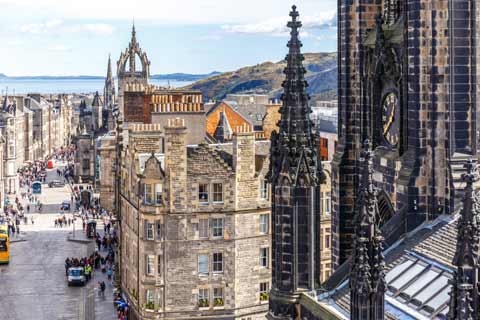 The centre of Scotland's Capital City is split into two distinct sections. The medieval Old Town features towering buildings, cobbled streets and narrow passageways known as closes. The main street here is the famous Royal Mile which links Edinburgh Castle to the Palace of Holyroodhouse.

To relieve the overcrowding that blighted the city a competition to build a new town was announced in 1766. It was won by a young unknown architect called James Craig who proposed a grand grid-iron street plan with grand squares, gardens and wide streets.

It was so different from the winding streets of the smelly and noisy Old Town. It's no surprise, perhaps, that Edinburgh's great and good quickly moved into the New Town, an event known as the "Grand Flitting."

Check out our Spotlight on the New Town of Edinburgh blog for more information.

Situated on the banks of the River Thames in central London the Palace of Westminster has been the seat of political power in the United Kingdom for over 900 years. It's probably better known as the Houses of Parliament, and its clock tower Big Ben, although that name actually refers to the 13-ton main bell. 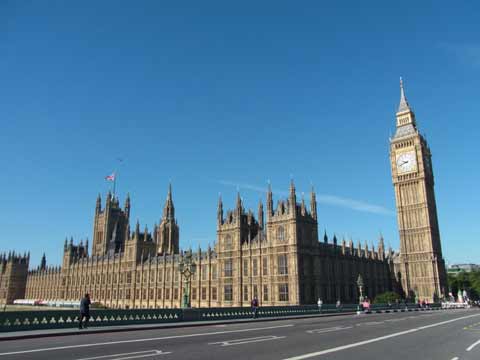 This impressive gothic revival building houses The Commons Chamber where 650 Members of Parliament gather to debate and vote on new laws. A second chamber, known as the House of Lords, checks and challenges the decisions taken by the government.

The Palace of Westminster also contains committee rooms, offices and The Robing Room, used by the Monarch before performing the State Opening of Parliament.

Founded in 960 AD, Westminster Abbey has been the scene of all coronations since the time of William the Conqueror. The Abbey is the resting place for some 3,000 people including British Royalty, Isaac Newton, Charles Dickens and the Unknown Warrior, one of the most visited war graves in the World.

Westminster Abbey has also been the venue for many Royal Weddings with the most recent being in 2011 when Prince William wed Catherine Middleton. They are now the Duke and Duchess of Cambridge.

Mystical and magical Stonehenge has fascinated mankind for centuries. This must be the World's most famous prehistoric monument. 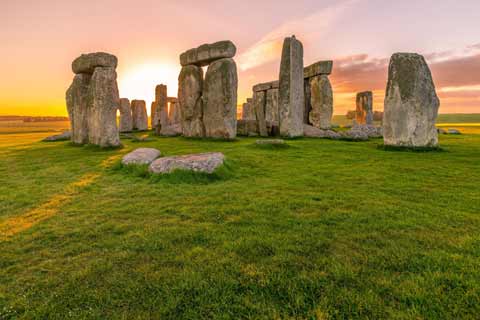 It's a massive stone circle of vast megalithic pillars and lintels. It's a feat of engineering as it was built without using modern construction equipment. It's thought that some of the stones were brought from as far away as South Wales, which is no mean feat.

When was Stonehenge built?

Thought to have been constructed 3,500 to 5,000 years ago, who made Stonehenge has baffled the experts. Some claim it was a ritual place of sacrifice, others that it was an astronomical observatory. Certainly, Stonehenge was an important shrine or ceremonial gathering place of one kind or another.

The natural beauty of the area is protected as the Lake District National Park which contains Scafell Pike, England's tallest mountain and no less than 16 lakes including, Windermere, the largest stretch of water in England.

Windermere and nearby Bowness-on-Windermere are popular attractions from where you can take a leisurely boat trip or seek out the many sites connected to Beatrix Potter. Over the dramatic Kirkstone Pass lies Ullswater, which sits in the shadow of Helvellyn Mountain. At around 9 miles long (14 km) it's the second largest lake in the park. 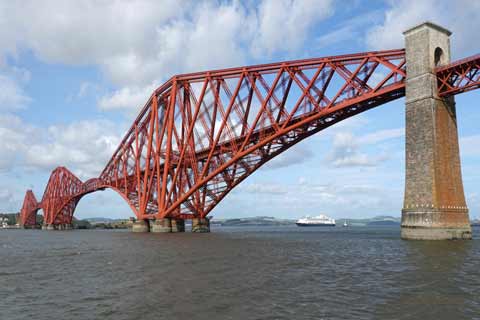 Opened in 1890 The Forth Bridge spans the Firth of Forth carrying the railway line from Edinburgh towards Fife then onwards to Aberdeen and Inverness. Although it is well over 100 years old, the bridge still carries around 200 trains daily.

The length of this massive bridge is just over 1.5 miles (2,467 m), making it the longest cantilever bridge in the World.

This impressive structure has given its name to the famous phrase "like painting the Forth Bridge" which means a never-ending task. 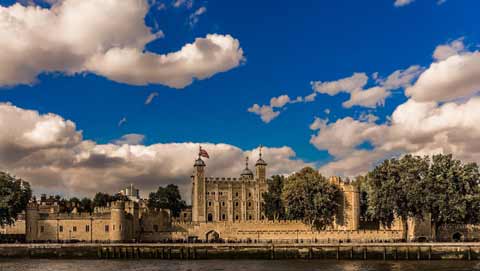 This ancient fortress has been a Royal residence, prison and armoury for centuries. It was also a place of execution. Entering through the Traitors Gate, those unfortunates would have a one-way trip to the Tower. In days of old, it certainly paid not to fall out of favour with the King!

The original part of the complex is the White Tower. It was built under the orders of William the Conqueror in 1078, and when it was complete, it was the tallest building in London. The Tower currently houses a display of armouries that date from the reign of King Henry VIII. 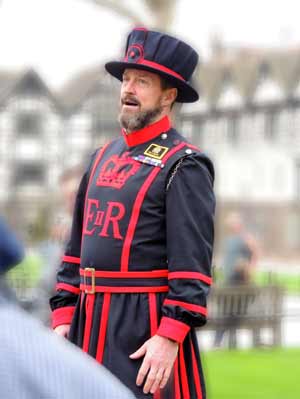 Many visitors to the Tower make a bee-line to the Jewel House to see the dazzling Crown Jewels. Sure, it can get jam-packed here, but it's well worth the wait. See the Coronation Regalia, used at every coronation of the English and British Monarchs since 1661  and the Imperial State Crown which was made for Queen Victoria in 1837. It's studded with over 3,000 jewels and is still worn by HM The Queen at the State Opening of Parliament.

If you are planning to visit the Tower of London, our insider's tip is to join a tour led by a Yeoman Warder, known as a Beefeater. As well as being informative, you'll find them to be highly entertaining. So much so that many visitors have posted videos of their guided walks on YouTube.

Many of our tours feature visits to Britain's UNESCO World Heritage Sites, so it's easy to include them in your vacation plans. Why not start planning your perfect holiday today.

Discover the best of Britain with Scottish Tours.