The London to Edinburgh high-speed train service is featured in many of our popular Scotland tours from London. Travelling from the heart of London to Scotland, by train is convenient, relaxing and fast.

Sure, you can fly to Scotland from London, it takes just over an hour from wheels up to wheels down. Add getting to and from the airport, clearing security, queuing at the boarding gate and the time taken for the trip all mounts up. Then there are environmental concerns to think about too.

If you’re not an experienced train passenger, this handy guide will explain just how easy and enjoyable the experience of taking the train can be.

Best train from London to Edinburgh

There are two ways to get from London to Edinburgh by train. You can choose to take the west-coast route via Preston and Carlisle or the east-coast track through York and Newcastle-upon-Tyne. We’re going to look at the East Coast route as this is the most direct way to travel. Trains on this route are operated by London and North Eastern Railway (LNER).

Trains leaving London for Edinburgh depart from London Kings Cross Station on Euston Road. It’s easy to get there by public transport as it is served by six underground (tube) lines and numerous bus routes. The station is adjacent to St Pancras International Station offering excellent connections with Eurostar train services from Continental Europe.

How to buy train tickets

Travelling with Scottish Tours is the easiest way as we’ll arrange your train tickets and seat reservations for you as part of the tour package. If you are travelling independently, you can buy your tickets on the LNER website. It’s best to book in advance to get the cheapest fares.

Once you’ve booked your tickets, download them to your smart device, and you are good to go. Just don’t forget to activate your tickets before travelling.

Finding your seat on the train 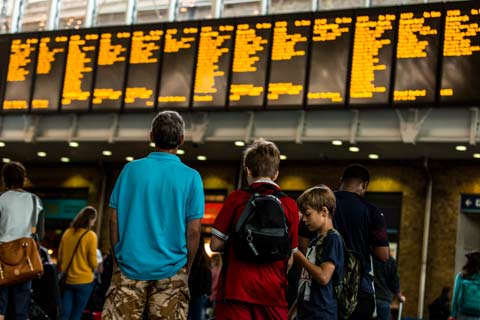 Your train departure time; carriage and seat number are shown on your train ticket. Unlike flying there is no minimum check-in time, but it’s a good idea to be at the station around 30 minutes prior to the departure time of your train.

When the platform number is shown, make your way directly to the train. Each carriage is allocated a letter so head for the one shown on your ticket. There are two entrances to each carriage, and the seats closest to each are displayed on the screen outside.

As you board the train luggage storage can be found at the ends of the carriage. There is also a rack above each seat for smaller bags. Seat numbers and reservations are shown on electronic screens, so it’s easy to find your allocated places.

How long is the train journey from London to Edinburgh?

You’ve probably heard of the Flying Scotsman. It’s a famous steam locomotive that was first to reach the speed of 100 miles-per-hour. The Flying Scotsman is also the name given to the fastest train service on the line. Operating from Edinburgh to London once a day, with only one stop the journey takes precisely four hours.

Most trains take between 4 hours 22 minutes and just over 5 hours, depending on the number of stops made. Usually, the trains that leave London on the hour are the fastest. 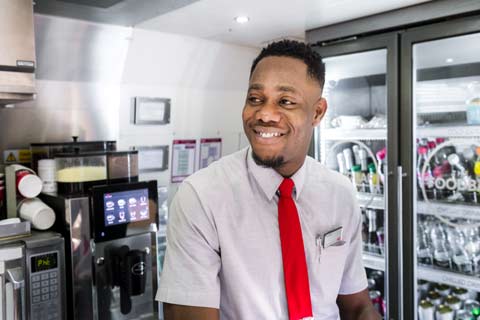 Feeling pangs of hunger or a wee thirst? No problem, just head to the Café Bar for a wide choice of sandwiches and food to go. A selection of hot and cold drinks is served too. Prices reflect the convenience factor, so if you’re on a budget, it might be an idea to bring your own supplies with you.

If you splash out on a first-class ticket, you can enjoy even more space as well as complimentary food and drink served at your seat. 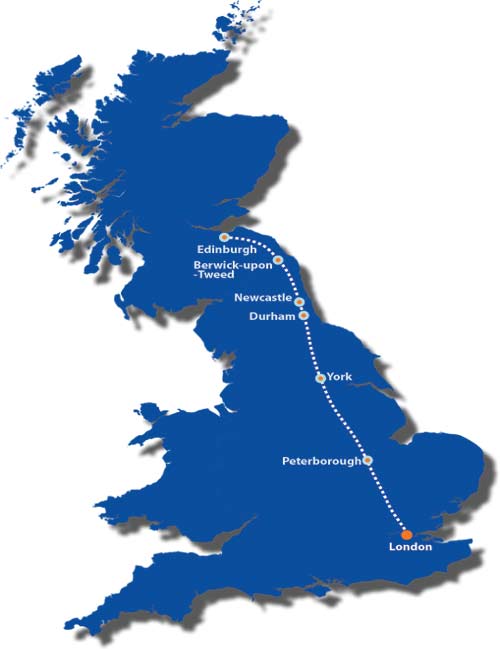 Main stations served by the route

Without a doubt, one of the best bits of travelling by train from London to Edinburgh are the views along the way. Even regular travellers glance up from their screens from time to time to take in the sights. The stops the train makes will vary, but almost all trains will stop at York, Durham and Newcastle-upon-Tyne.

Here are some of our favourite stops travelling from London. 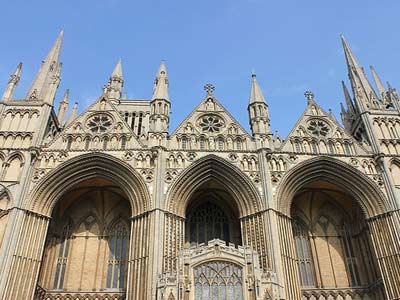 As we enter this bustling city look out for magnificent Peterborough Cathedral, which dates from the 12th and early 13th Century. Mary, Queen of Scots, was buried here before being later laid to rest in Westminster Abbey.

A short distance after leaving Peterborough the train will pass through Grantham, the birthplace of Margaret Thatcher, Britain’s first woman Prime Minister. 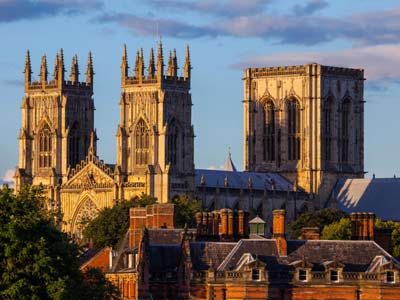 Founded by the Romans in AD71, York was their northern headquarters for 300 years. The Vikings later captured the colony and renamed it Jorvik, which gives the city its name.

As we make the approach into York Station, there are fantastic views of the towering Minster, one of the greatest cathedrals in Britain. 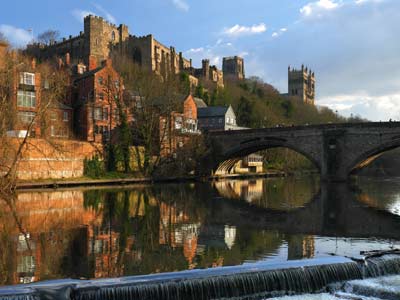 This famous city is known for its University and Cathedral. We will see both standing grandly on a hill overlooking the city and the River Wear below.

Look out for the castle too, William the Conqueror ordered its construction in 1069 as a defence against the Scots. For Centuries this was the seat of the Prince Bishops who ruled County Durham as Kings, in all but name. 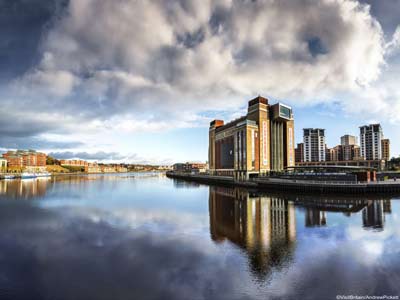 There are dramatic views of the River Tyne as the train crosses the King Edward Bridge. See the historic quays, the Tyne Bridge and the impressive Sage Gateshead arts venue as the train snakes its way into Newcastle Central Station.

Departing from the station, the train will pass Newcastle Castle, which is more than 1800 years old. It’s thought the original fort was built by the Romans as part of Hadrian’s Wall. 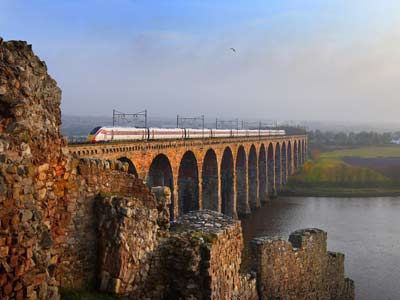 One of the highlights of the journey must be the crossing of the Royal Border Bridge to arrive in Berwick-upon-Tweed. Opened by Queen Victoria in 1850 this magnificent bridge has 28 arches which carry the railway tracks high above the River Tweed.

The walled border town of Berwick has been fought over by the Scots and English for centuries. It has been captured by one side or the other no less than 13 times before finally settling down to be the most northerly town in England. Three miles after leaving Berwick, we slip seamlessly into Scotland.

As the train travels along the Berwickshire Coast, there are fantastic views of the North Sea to enjoy. 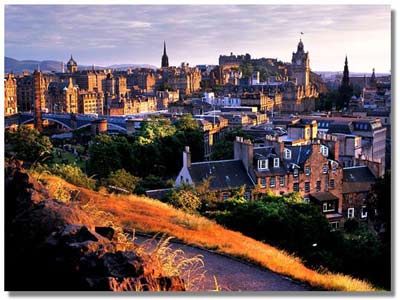 The end of our journey is at Edinburgh Waverley Station, the main railway station in the Scottish Capital. On arrival, take the escalators to reach Princes Street for onward bus and tram connections. If you want to take a taxi, you’ll find a rank on Market Street, which is also the location for most Uber pick-ups.

If you want to experience the grand old days of travel, why not book accommodation in the 5-star Balmoral Hotel which sits above the station. This luxury hotel was built by the North British Railway Company and opened its doors in 1902. It remains one of Edinburgh’s most luxurious addresses.

It’s easy to experience the best of Scotland with one of our short break Scotland tours from London. These carefully crafted packages let you spend time in Edinburgh or venture further to explore the Highlands, Isle of Skye and the Far North.