Scotland's most northerly city, Inverness, is affectionately known as the "Capital of the Highlands". It's a modern, vibrant city that is packed with cultural attractions and superb shopping opportunities.

This 24-hour guide offers our recommendations on what to see and do in the city. If you're planning to stay for a few days, it's possible to venture further afield to visit the Isle of Skye; the Northern Highlands and even the Orkney Islands, on a one-day tour.

The city is located at the northern end of the Great Glen in the Scottish Highlands. In Gaelic, the city name is translated as Inbhir Nis, which means "Mouth of the River Ness" which flows through the city on its way from nearby Loch Ness into the Moray Firth.

The city is on record as being at the centre of the old trade and drover routes since 565AD, although it was probably a busy trading centre before then. By the 6th Century, Inverness had become the Capital of the Pictish Kingdom. King Brude was visited by St Columba in around 565, having had his famous encounter with Nessie, the Loch Ness Monster, along the way.

During the Jacobite uprisings of 1715 and 1745 Inverness was occupied by the opposing sides several times. The most famous episode was the battle at Culloden Moor, which took place in 1746. I'll explain more about this event later.

In 1822 the Caledonian Canal reached Inverness, and around 30 years later the railway arrived making it much easier to transport goods and people to and from the city.

How to get to Inverness

Today Inverness is well connected. Inverness Airport (INV) is 7 miles east of the city and offers direct flights to London, Amsterdam and Dublin, as well as several island destinations. 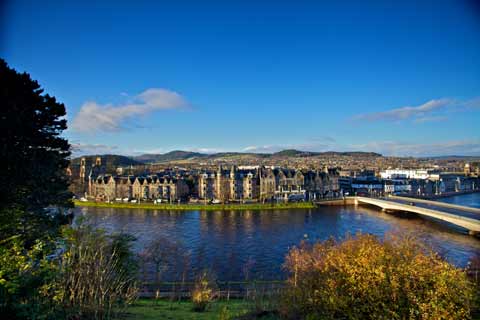 If you plan to drive, you can take the A9 route through Highland Perthshire and the Cairngorms National Park or the A82 via Glen Coe and Loch Ness. Whichever road you choose you'll enjoy spectacular scenery all the way.

There are regular trains to and from Aberdeen, Edinburgh and Glasgow as well as a daily London to Inverness train named the "Highland Chieftain". At 581 miles long is one of Britain's longest and most scenic train journeys.

Many visitors like to let someone else take care of the driving and choose a tour that uses the city as a base. The four-day Best of the Highlands and five -day Highland Highlights tours are very popular.

Things to do in Inverness

There are lots of things to do in Inverness City. Here are some of our favourite attractions:

Discover the history of Inverness through a series of exhibits and artefacts that range from Pictish stones to more modern displays of Jacobite memorabilia. Highland silver, weapons and bagpipes. 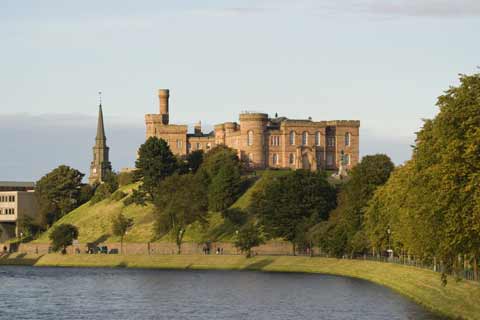 The castle dominates the city from its cliff-top position, overlooking the River Ness. The building we see today was built in 1834 and is one of several that have stood on this site. It's thought that King Malcolm III had the first castle built-in 1057, but it was destroyed during the Wars of Independence to prevent it from falling into English hands.

A subsequent castle was built in the mid 16th Century. It was besieged in 1562 by the forces of Mary, Queen of Scots when the castle gates were slammed closed in her face, and she was refused entry. The siege lasted only three days after which the castle was recaptured. The Queen later repaid the Castle Govenor's hospitality by having him hanged!

Today's castle was built as a courthouse, a role it continues to perform to this day. The castle building is not open to the public, although in 2017 the North Tower was opened as the Inverness Castle Viewpoint giving fabulous 360-degree views over the city.

A popular pre-dinner stroll is through the Ness Islands, a group of charming islands located in the middle of the River Ness all connected by a series of Victorian-era suspension bridges.

Discover how a kilt is made and learn the captivating story of tartan at the Scottish Kiltmaker Visitor Centre. See experienced kiltmakers demonstrate how they create a finished garment from cutting cloth to pleating and stitching. 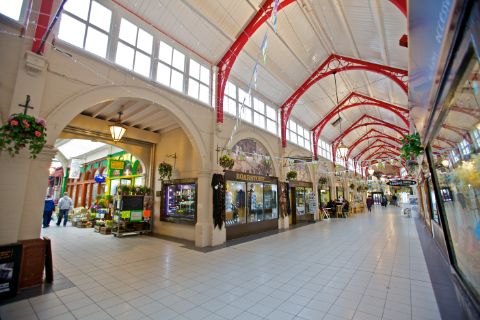 Like most towns, Inverness had an open-air market, which was open to the elements. In 1876 the Town Council built a covered market to protect traders and customers from the sometimes unpleasant weather.

Unfortunately, the original market was destroyed in a dramatic fire. It was rebuilt in 1890 with a design that connects four neighbouring streets. This Inverness institution is home to a wide variety of independent traders including a chocolatier, a tartan retailer and a bagpipe shop.

Located on Church Street, this is the oldest surviving house in Inverness. It was built in 1593 and was briefly owned by the Fraser of Lovat family whose clan members fought at the Battle of Culloden in Bonnie Prince Charlie's Jacobite army.

Visit this delightful townhouse to learn more about Inverness in the 1600s and to relax in its compact gardens.

Places to visit from Inverness

This desolate moorland was the site of the last battle ever fought on British soil. On 16 April 1746,  the Jacobite army of Bonnie Prince Charlie came face-to-face with the British Government Troops under the command of the Duke of Cumberland. 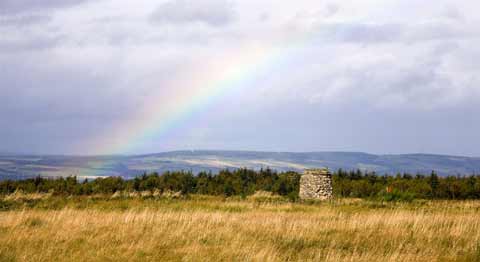 The bloody battle lasted not even an hour. Of the 1,500 men were killed, almost 1,000 were Jacobites. The British troops were victorious, and the Prince fled the scene. He went into hiding and managed to evade capture for 5 months, escaping Scotland forever on 20 September 1746 bound for France.

The aftermath for those left behind was severe. The Duke of Cumberland was vengeful in victory, and his savagery soon gained him the nickname "butcher". The clan system was broken up and wearing tartan was banned. Highland life was changed forever.

Today the battlefield site has been restored to how it would have looked that fateful day. An award-winning visitor centre tells the story using an immersive audio/visual experience which is highly recommended. 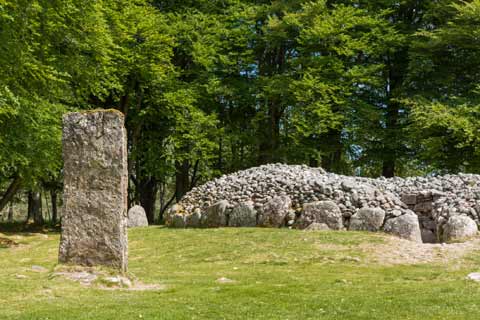 Near to Culloden sits a mysterious Bronze Age cemetery consisting of passage graves, kerb cairns and standing stones. This well-preserved complex is believed to have been in use twice. Firstly, around 2,000 BC then again a thousand years later.

It's thought that these haunting stone circles were the inspiration for Craigh na Dun in Diana Gabaldon's Outlander novels. It's where Claire fatefully stepped through a split-stone to be swept back in time to 1743 and the start of her adventures. 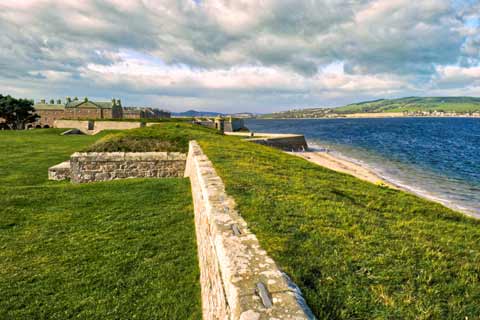 Built after the 1745 Jacobite Rebellion, this mighty fort is still a working army barracks. Protected by nearly 1.6 km of colossal walls it was designed to keep the Highlands under control and to symbolise the power of the British Government.

As you walk into this massive fortress, which has hardly changed in 250 years, it's hard not to think of what life must have been like for a Redcoat posted to this remote and hostile location. The Highlanders Museum tells the story, and costumed actors will bring their history to life.

As a "foodie destination" Inverness comes pretty high up the list. The city is home to many excellent restaurants serving locally sourced produce. Here are a few dining options for you to consider:

When it comes to fine dining in Inverness, you can't beat the Rocpool. Stylish, yet relaxed this restaurant serves Scottish cuisine with a modern twist. Signature dishes include locally-grown courgette flowers served tempura style stuffed with goats cheese and roast Shetland halibut with fresh clams and baby leeks.

An Invernesian institution since it opened in 2001 this lively restaurant is housed in a converted church which offers a spacious dining area. The imaginative menu is changed weekly to reflect the local nature of the produce used. Typical tasty dishes include haggis samosas and haunch of Ardgay venison.

This Mediterranean restaurant offers Turkish styled food so think of sharing dips served with freshly made bread and meat grills including lamb or chicken sis. Vegetarians are well catered for with their delightful sebzeli moussaka or vegetarian mixed meze.

For something a bit different check out this Caribbean restaurant. Its name comes from the movie about the Jamaican bobsled team and their attempt to enter the Winter Olympics. Flavoursome offerings include rasta chicken pasta and coconut rum flambe curried prawns washed down with a variety of fruit juices. 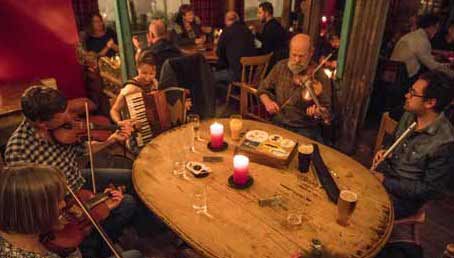 After dinner, you might want to stop off at the famous Hootenanny pub for a nightcap.

This lively bar is renowned for the Scottish folk music which is performed here on most nights. The bar draws an appreciative crowd of both locals and tourists. It serves traditional real ale sourced from the nearby Black Isle Brewery.

If you plan to explore further afield, Inverness makes an excellent touring base. Some of Scotland's most historic and picturesque sights are easily accessible on one of our Inverness day tours including the Isle of Skye, Northern Highlands and the Whisky Trail. 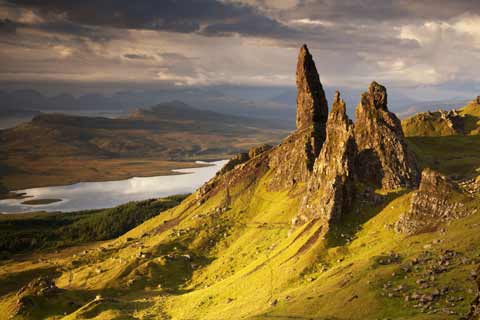 Isle of Skye tours from Inverness

Without a doubt, the Skye Bus Tour is the most popular excursion from Inverness. Most include viewing the Cuillin Hills, a stop in Portree and time exploring the bizarre geology of the Trotternish Peninsula too.

There is usually a stop at Eilean Donan Castle, so you can see this fairy-tale fortress. The Ultimate Skye Tour does all of this plus provides time to visit the fantastic Fairy Pools, an absolute must for Instagram devotees.

Who hasn't heard of "Nessie", the elusive resident of Loch Ness? You can boost your chances* of seeing this timid creature by taking to the waters. Cruises across the deep and dark waters of Loch Ness depart from Dochgarroch Locks, The Clansman Centre, Urquhart Castle and Fort Augustus.

For an all-inclusive* experience take the Loch Ness Passion tour from Inverness which bundles a coach tour, Loch Ness cruise with visits to Urquhart Castle and the Loch Ness Exhibition Centre in one package.

* sightings of "Nessie" are not guaranteed! 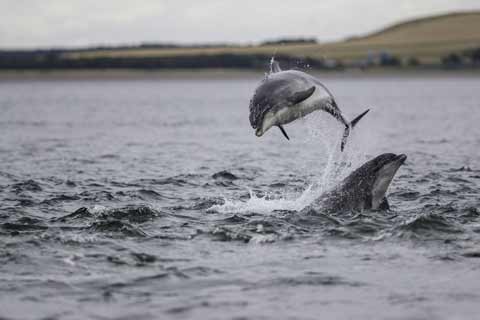 The Moray Firth is home to a colony of around 190 bottlenose dolphins living in the Moray Firth. Dolphin Spirit cruises offer both traditional and fast-rib sailings from Inverness Harbour lasting up to 2 hours.

If you prefer to keep your feet on dry land check out The Highland Experience day tour which features a stop at Chanonry Point, one of the best vantage points for dolphin spotting in Scotland. Other attractions on tour include Beauly, Glen Ord Distillery and the delightful fishing port of Cromarty.

Make the most of your visit to Inverness with Scottish Tours

Our Inverness centred tours are available from Edinburgh and feature your choice of guest house or hotel stay. Relaxed touring options will take you to the Isle of Skye and the Northern Highlands. All in one affordable tour package.

If you are an independent spirit and like to do things your way, why add one of our amazing Inverness bus tours to your travel plans to see more of the Highlands.

Either way, we offer the very best choice and value. Book your Scotland Tour today.