In the footsteps of Mary, Queen of Scots

The sad saga of Mary, Queen of Scots is a tale so bizarre that it would not seem out of place in a TV drama. No wonder then that her life story has been replayed in numerous movies and tv programmes.

The story of Mary’s life is a fascinating one. Here we research the history and look at some of the locations in Scotland associated with her. 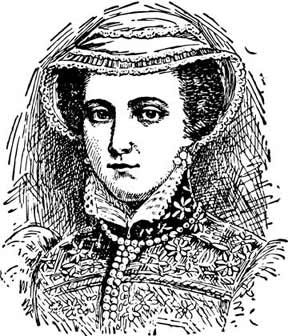 Who was Mary, Queen of Scots?

Mary was Queen of Scotland from 1542 until 1567 and was also known as Mary Stuart and Mary I of Scotland. Her father was King James V of Scotland, and her mother was Marie de Guise, a member of the French royal family.

She was 5’ 11” tall, attractive, charming, and very cultured and educated – historians believe she would have had a similar education to that of her cousin Elizabeth 1, Queen of England.

In her short life, Mary proved to be a strong Monarch in an era dominated by powerful men. 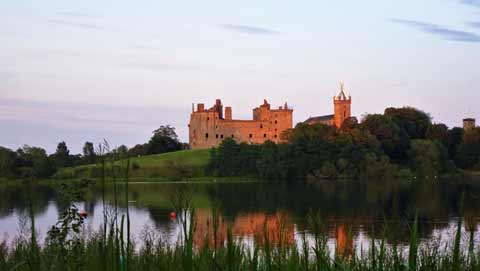 Mary was born in Linlithgow Palace in West Lothian, on 8 December 1542, and spent the first 9 months of her young life there.

Scottish monarchs often used this magnificent residence as a stopover on the journey between Stirling Castle and Edinburgh.

You can visit the ruins of this Renaissance palace, which overlooks a lovely loch and beautiful scenery. 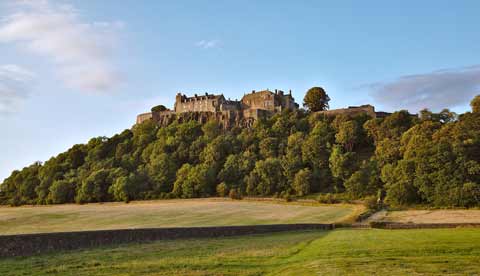 Sadly, Mary’s father died when she was only a 6-day old infant, which meant that she inherited the crown and became Scotland’s Queen on 14 December 1542.

She was subsequently crowned in the Chapel Royal of Stirling Castle the following year.

Stirling Castle is one of Scotland’s most popular visitor attractions, and records mention this ancient place dating back to 1107.

You can see the wonderfully restored Royal Apartments and feel what it must have been like to live there in Mary’s time.

This was the time when King Henry VIII of England was trying to force the marriage of the child, Mary, to his son Edward VI in an attempt to unite the English and Scottish crowns. This campaign became known as the ‘Rough Wooing’. A treaty was signed to this effect on 1 July 1543 but subsequently rejected by the Scottish Parliament, leading to 8 years of fighting between England and Scotland. 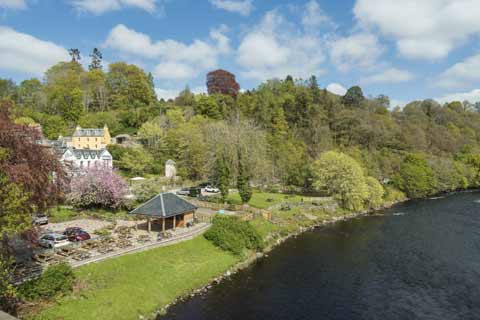 It was a dangerous time for Mary, during which the young Queen’s protectors, including her half brother the Earl of Moray, placed her in various locations for her safety.

Mary and her mother went to the town of Dunkeld for their security in May 1544. This lovely historic town sits on the banks of the River Tay in the heart of Highland Perthshire.

Mary was sent to the safety of Inchmahome Priory in September 1547,  for 3 weeks when she was 4 years old. The 13th-century monastery sits on an island in the Lake of Menteith, Scotland’s only lake, near Aberfoyle in the Trossachs.

You can take a boat trip over the lake to visit the ruined priory from Port of Menteith. 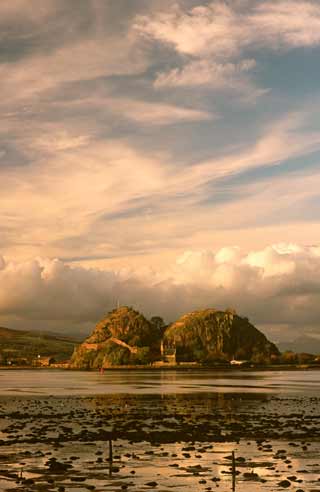 In February 1548 Mary was moved to Dumbarton Castle, just outside Glasgow.  This impressive Scottish fortress which sits on top of a 350 million-year-old volcanic rock has a history dating back to the 13th century and has been a refuge for many Scottish monarchs.

A marriage treaty with the French royal family was signed in July 1548, and Mary was officially betrothed to the 4-year-old Dauphin Prince Francis. It was decided that Mary should be brought up at the French royal court, and so in August 1548 at the age of 5, she set sail from Dumbarton for a new life in France. Her mother, Marie de Guise, stayed behind and competed with Scottish nobles to rule in Mary’s place.

Mary married Francis in April 1558, and they became King and Queen of France on the death of King Henri the following year. Together they ruled France until Francis’ death in December 1560, when he was only 16 and Mary was 18.

With her husband and her father-in-law dead, no allies at the French court, and a kingdom to run back home, Mary returned to Scotland, arriving at the port of Leith just outside Edinburgh on 19 August 1561.

Mary resumed her reign of Scotland from her residence in the Palace of Holyroodhouse in Edinburgh.  As Mary was now a widow, it was expected that she would find a new husband and provide an heir. Various suitors were considered, but in the end she married her English, Catholic cousin Henry Stuart, Lord Darnley, in July 1565 at Holyrood Palace.

The Palace of Holyroodhouse 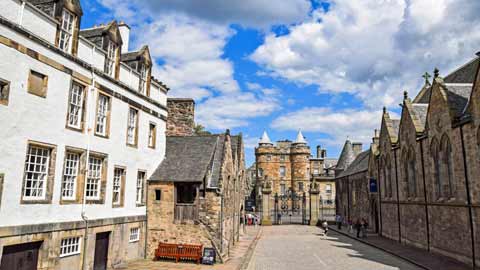 Mary and Darnley lived together at Holyrood Palace, but unfortunately, their marriage was not happy. Darnley was possessive and jealous, he wanted more power, and his drinking was out of control.

Mary was close to her Italian Private Secretary David Rizzio, who Darnley plotted, along with other power-hungry lords, to have murdered in Holyrood Palace on 9 March 1566, in front of Mary.

The Palace of Holyroodhouse sits at the bottom of Edinburgh’s famous Royal Mile and is the Queen’s official residence in Scotland.

Take a city tour to explore the palace and see Mary, Queen of Scots’ Royal chambers. This is where she had conversations with the Protestant reformer John Knox, who tried to convince Mary to leave the Catholic Church. 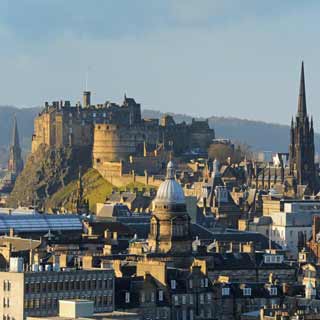 You can also see the oratory where she was allowed to attend Catholic mass – it was the only place where she could practice her religion, as Scotland was becoming a Protestant country following the Scottish Reformation.

Despite the many problems that Mary and Darnley were having, Mary gave birth to a son, James, on 19 June 1566 in the Royal Palace at Edinburgh Castle.

You can visit the room where the future James VI of Scotland and I of England was born.

Mary spent some time in the Scottish Borders in October 1566. One of the places she stayed at is thought to be what is now known as ‘Mary, Queen of Scots House’ in Jedburgh, which is now a museum, open to visitors.

From Jedburgh, Mary travelled on horseback to visit James Hepburn, the Earl of Bothwell, her future husband, at Hermitage Castle.

Now partly ruined, this fortress was once a strategic location in the wars between England and Scotland.  It’s said that various ghosts haunt this sinister-looking old castle, one of whom might even be Mary herself! 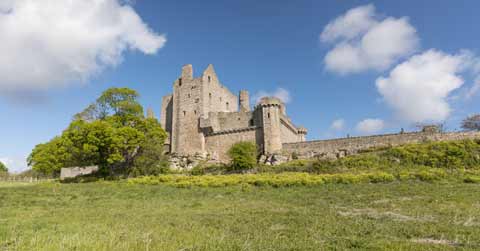 By 1566 the relationship between Mary and her husband Darnley was in a bad state, and his behaviour was a serious concern. Mary discussed ‘the problem of Darnley’ with prominent nobles at Craigmillar Castle in November 1566, including the Earl of Bothwell.

A pact was signed to deal with Darnley by whatever means necessary, although it is not thought that Mary was aware of the Lords’ intention to murder him.

Craigmillar Castle is a formidable medieval stronghold, lying just outside Edinburgh. The views from the tower over to Edinburgh are very impressive, and you can wander the well-preserved castle and imagine the political intrigues that took place there!

In February 1567, fearing his life was in danger, Darnley had gone to stay with his father. He was persuaded to return to lodgings in Edinburgh. Following a mighty explosion, he was found at the house, dead. He had also been strangled. 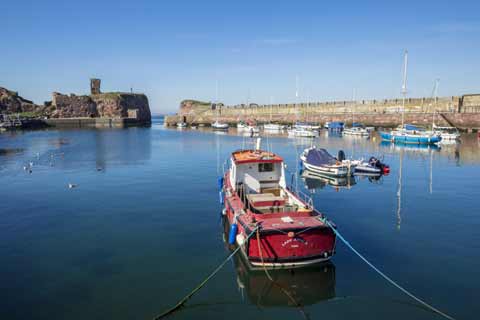 Mary visited her son at Stirling Castle between the 21st and 23rd of April 1567. He was less than a year old, and sadly it would be the last time they would ever see each other.

On her way back to Edinburgh, she was abducted by Bothwell and his men. They took her to Dunbar Castle on the east coast, near to Edinburgh. Despite being implicated in the plot to kill her husband Darnley, Mary married Bothwell on 15 May at Holyrood, and they returned to Dunbar Castle again after their wedding.

Formerly one of the strongest castles in Scotland, Dunbar Castle is unfortunately now a ruin, unsafe to visit, and is best viewed from Dunbar harbour. 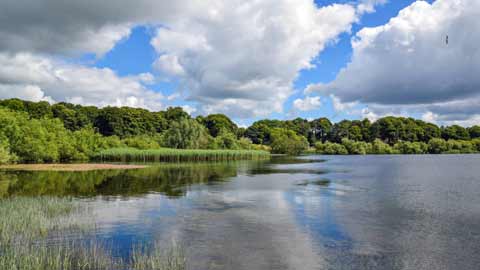 Unsurprisingly, Mary’s marriage to Bothwell - the man thought to have killed her husband - was very unpopular. This led to Mary’s imprisonment by rebel lords in Lochleven Castle on 16 June 1567.

While she was imprisoned, she miscarried twins, and on 24 July, she was forced to abdicate the Scottish throne in favour of her son James, who was 1 year old.

But Mary was nothing if not resourceful, and she managed to escape on 2 May 1568, with the help of the castle’s owner George Douglas and his family.

You can visit the ruined remains of Lochleven Castle, which sits on an island in Loch Leven, in Perth and Kinross.

The Battle of Langside 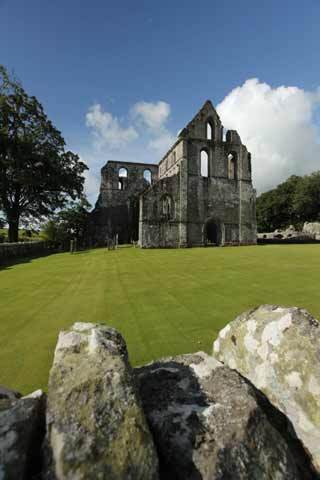 Mary managed to raise an army of supporters, and she faced her half brother Moray’s forces at the battle of Langside in the south of Glasgow on 13 May 1568, but her troops were defeated. You can see the plaque commemorating the battle opposite the Battlefield Monument.

After her defeat at Langside Mary went south and spent a night at Dundrennan Abbey near the town of Kirkcudbright. Sheltered amongst woodland this peaceful Cistercian monastery, was where Mary spent her last hours in Scotland.

From Dundrennan she fled to England across the Solway Firth on 16 May 1568 in the mistaken belief that Queen Elizabeth I of England, her cousin, would give her assistance.

And here we leave the story of Mary in Scotland. She was subsequently imprisoned for 19 years at Elizabeth’s behest in various locations in England, then finally executed at Fotheringhay Castle on 8 February 1587. Her body lies in Westminster Abbey.

Mary’s son James VI of Scotland became James I of England after Elizabeth’s death in 1603.

Despite taking quite a few liberties with the historical facts, the recent 2018 Hollywood film starring Margot Robbie as Elizabeth and Saoirse Ronan as Mary is an interesting take on the relationship between Mary, Queen of Scots and Queen Elizabeth I of England. There’s also some gorgeous Scottish scenery to admire, as the film was shot on location all over Scotland.

Discover more about our celebrated authors, scientists, kings and queens on our Famous Scots page.

While visiting Scotland isn’t possible just yet now is the time to plan your next visit. Choose Scottish Tours for easy booking with no-hassle change and cancellation terms. There are no booking fees, and your money is protected, thanks to our ABTA financial bond.