Explore the Georgian New Town, then escape the hustle and bustle of city life at the Royal Botanical Gardens. In Leith, there's the opportunity of visiting the former Royal Yacht Britannia before heading to the famous Royal Mile to see the Place of Holyroodhouse and the Scottish Parliament Building.

Movie locations - Sunshine on Leith, The Illusionist and Prime of Miss Jean Brodie

As the Capital City of Scotland, Edinburgh has many Royal connections. This fascinating tour visits two of the most important sites, together with many other attractions.

Starting in the heart of Edinburgh's Georgian New Town we tour through St Andrew Square then along Princes Street to see the colourful gardens and the magnificent views of Edinburgh Castle.

Hop off at the Royal Botanical Gardens to explore the extensive grounds which include the rock garden, Chinese hillside and the Queen Mother's Memorial Garden - all featuring the Edinburgh Skyline as a backdrop. The 10 magnificent glasshouses contain over 8,000 plants including specimens from the tropics and the South American rainforest.

The Port of Leith has a bustling restaurant and bar scene. It's also the permanent home of the Former Royal Yacht Britannia.

Launched in 1953, Britannia has travelled over a million miles in the service of HM The Queen and members of the Royal Family. Step aboard to see the beautiful State dining room and Royal apartments, then visit the Bridge and below-deck crew quarters

Located at the foot of Arthurs Seat in Queen's Park sits the Palace of Holyroodhouse, the official residence of HM The Queen in Scotland. During a tour of the apartments, you can see the Throne Room, the Royal Dining Room and the Kings Bedchamber.

In the Palace grounds you can visit ancient Holyrood Abbey and the delightful Gardens, the venue for The Queen's annual Garden Party.

The tour ends with a drive up along the famous Royal Mile passing the Scottish Parliament Building, Canongate Kirk and John Knox House.

What is included in the price of the tour?

Our ticket price includes transportation by open-top or part-covered double deck bus with either a live commentary in English or personal recorded commentary.

Your ticket is valid for 24 hours from the time you exchange your voucher for a tour ticket.

Keep your ticket in a safe place as it cannot be replaced if you lose it.

How will I know where to get off?

There are so many places to explore on these tours. The key attractions at each stop are announced so that youâ€™ll know where to alight.

Youâ€™ll also be given a handy tour map that lists the places youâ€™ll want to visit. 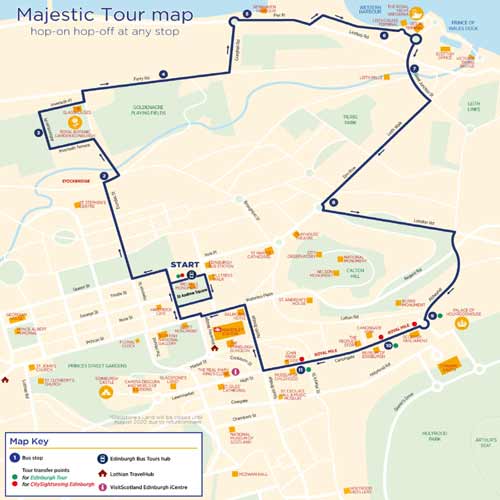