The Crown Filming Locations in Scotland

The much-anticipated Series Four of The Crown debuted on Netflix recently. Although this drama series is fictional, the gripping storyline is based on real events and places. Scotland features heavily in the new series with filming having taken place throughout the Highlands.

In some episodes, the action revolves around the Balmoral Estate, The Queen’s beloved retreat in the Cairngorms National Park. In others, Scotland’s fabulous landscapes and coastal scenery doubled for locations in Ireland and Iceland.

Before you settle down to binge-watch the series, we’ll take a look at Scotland’s Royal connections, both real and fictional.

This historical Palace is HM The Queen’s official residence in Scotland. Traditionally she stays here for a week each summer, using it as a base for engagements throughout the country. 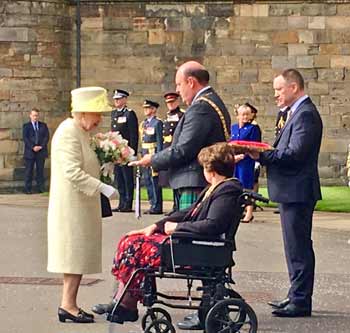 Known as “Holyrood Week”, it starts with The Queen being presented with the keys to the City of Edinburgh by the Lord Provost followed by an inspection of a Guard of Honour.

During her time at Holyrood Palace, The Queen conducts investitures, audiences and hosts a garden party for around 8,000 people in the Palace garden.

She is often accompanied by members of the Royal Company of Archers, a ceremonial body that acts as her personal guard in Scotland.

King David I founded the Palace as an Augustine monastery in 1128. Subsequent Monarchs chose to stay there, preferring to be surrounded by attractive parkland and countryside, rather than living in the more sombre settings of Edinburgh Castle. 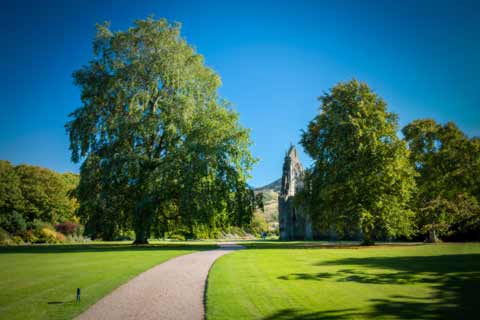 In 1501, King James IV built a palace for himself and his bride, Margaret Tudor, next to the Abbey. The Palace has been rebuilt several times over the centuries culminating in the creation of new Royal apartments in the 1670s that were decorated with sumptuous fabrics and intricate plasterwork.

The Monarch most connected with Holyrood is Mary, Queen of Scots (1542-1585) whose turbulent reign was blighted by tragedy and bad fortune. The Palace played witness to two of her weddings as well as the violent murder of her Italian secretary, David Rizzio, in 1566 by her second husband, Lord Darnley.

During the 1745 Jacobite Rebellion Bonnie Prince Charlie set up Court at Holyrood for six weeks. After a period of lavish celebrations and receptions, the Prince departed the Palace in October 1745 never to return.

Where is Holyrood Palace?

The Palace is located at the foot of Edinburgh’s ancient Royal Mile, next to the ultra-modern Scottish Parliament Building. Just outside the Palace walls lies sprawling Holyrood Park which includes Arthur’s Seat, a 251 m (823 ft) hill which offer fantastic views over Edinburgh and the surrounding countryside.

At the opposite end of the Royal Mile sits mighty Edinburgh Castle, which safeguards the Scottish Crown Jewels. Displayed in the Crown Room, “The Honours of Scotland”, as they are known includes the priceless Crown, Sceptre and Sword of State. 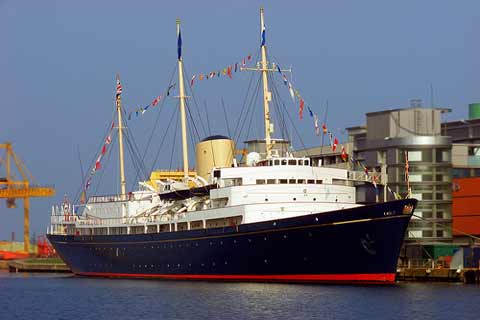 This unique floating Palace served The Crown for over 44 years and sailed more than one million miles during 968 state visits. The first Royal Yacht was built in the mid-1700s, and since then over 80 vessels have served in this distinguished role.

Over her long career, many influential World leaders have been welcomed aboard Britannia including Sir Winston Churchill, Nelson Mandela and Rajiv Gandhi.

The allure of this beautiful ship also appealed to several US Presidents with Dwight D Eisenhower, Gerald Ford, Ronald Reagan and Bill Clinton all having been piped aboard as guests of HM The Queen.

Where was the Royal Yacht Britannia built?

She was built at the John Brown and Company shipyard in Clydebank on the River Clyde. The Royal Yacht Britannia was launched in 1953 and, after commissioning the following year, her first voyage was to transport Princess Anne and Prince Charles to join their parents in Malta.

Where is the Royal Yacht Britannia berthed?

Britannia was decommissioned in 1997 and has a permanent home in the Port of Leith in Edinburgh where she is a popular visitor attraction.

Located next to the Ocean Terminal shopping centre visitors can tour five decks of the ship to see the Staterooms and Queen’s bed-chamber as well as learning what life was like below decks for the 240 members of her crew. 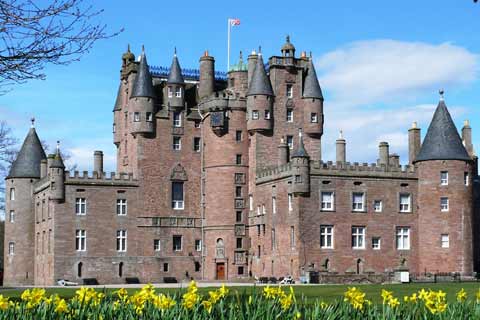 Surrounded by the rolling Angus countryside, Glamis Castle is the fabled setting for Shakespeare’s Macbeth and has been the seat of the Earls of Strathmore and Kinghorne since 1372.

Lady Elizabeth Bowes-Lyon, the mother of the current Queen, was born in 1900. Four years later her father inherited the Earldom which included Glamis Castle, so the young Elizabeth spent much of her childhood years there.

After moving to London, she met her future husband, the Duke of York (the second son of the King and Queen). They were married in 1923 and settled down to raise a family. First to be born was Elizabeth in 1926 followed by Margaret, who was born at Glamis Castle, in 1930.

Although it is a historical drama series, The Crown is based on true events that have happened during the reign of Queen Elizabeth. 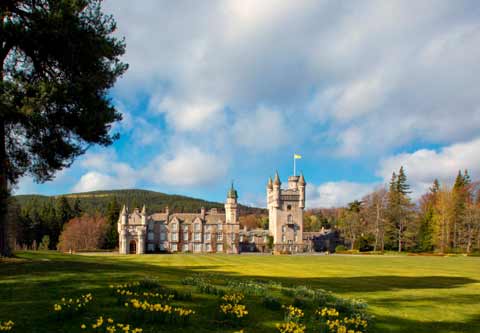 Queen Victoria made the first of many visits to Scotland in 1842, just four years after becoming Monarch. She was enchanted by the natural beauty that she discovered so together with her husband, Albert, they searched for a holiday home in Scotland.

In 1852 Prince Albert bought the Balmoral Estate and started work on building a new castle for the Royal Family. Completed in 1856 Balmoral was a favourite holiday home for Victoria until she died in 1901. The area surrounding the castle became known as Royal Deeside, a title that it enjoys to this day.

The Balmoral Estate has been passed down through the generations. It is now owned by HM The Queen who enjoys a summer break here each year, in the company of members of The Royal Family.

Close to the Balmoral Estate lies the town of Braemar. Here the most famous Highland Games in the World takes place presenting a spectacle of music, dancing and athletics. 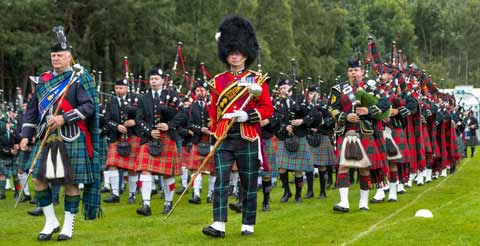 Traditionally it has been attended by the Monarch and members of the Royal Family who join an enthusiastic crowd to watch “The Heavies” compete in traditional sports like “Throwing the Hammer” or “Tossing the Caber”.

There are also displays of Highland dancing and individual piping competitions.

An iconic part of the games is the arrival of the Massed Pipe Bands which can include over twelve separate bands who come together in an impressive display of marching and music.

Castle of Mey in Caithness 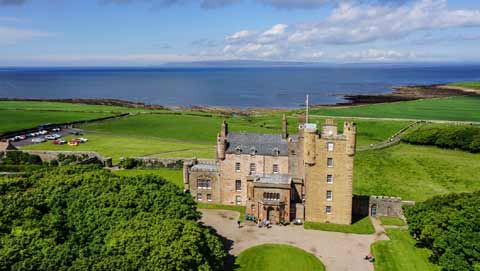 This 16th Century castle was bought by Queen Elizabeth, The Queen Mother in 1952 following the death of her husband, King George VI earlier in the year. Overlooking the sea, it was in a dilapidated state and took two years to renovate and restore. When the work was complete, it was renamed the Castle and Gardens of Mey.

At just over 8 miles from Dunnet Head, the most northerly point on the British Mainland, this Royal retreat could not have a more remote location. The Queen Mother would stay at the castle for three weeks each August, and it’s thought her last visit was in October 2001 when she was aged 101.

In The Crown (series one) Slains Castle in Aberdeenshire stood in for the Castle of Mey during filming. 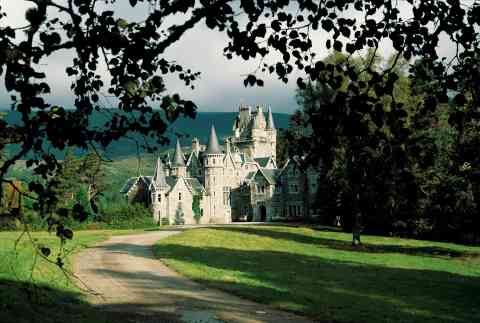 Ardverikie is a private estate, and the house has played Balmoral before in the popular film “Mrs Brown” as well as Glenbogle in the BBC comedy/drama “Monarch of the Glen”. It’s said it will also make an appearance in the new James Bond movie, “No Time to Die” due to be released in 2021. 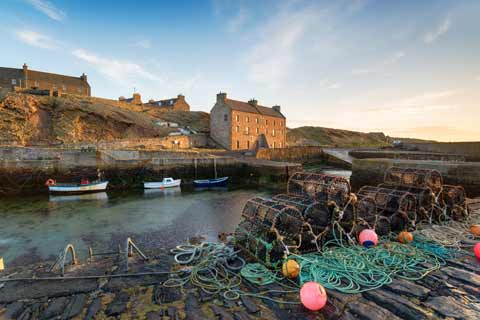 Queen Victoria and Prince Albert stayed at Ardverikie House on a visit to the Highlands in 1847. They stayed for three weeks, but their time there was marred by rainy weather.

They were searching for their ideal Highland retreat so, had the weather been kinder during their stay Queen Victoria and Albert may well have bought Ardverikie, rather than building Balmoral Castle. Wouldn’t that have been a twist of fate?

Attractive Lybster Harbour, on the famous North Coast 500 route, stands in for South Georgia during the Falklands War scenes. Also in Caithness is the Dunbeath Estate where the River Hofsa fishing scenes in Iceland were filmed.

Keiss Harbour was used as the filming location for Mullaghmore in Ireland, and impressive Ackergill Tower featured as Classiebawn Castle, the home of Lord Mountbatten and his family.

The Crown is just one of the many hit TV series and movies filmed in Scotland. Many of our tours will let you visit the filming locations used in popular films and TV programmes. So, if you’d like to discover Scotland as seen through the lens of your favourite show we’ve got just the right tour for you.