Spotlight on the New Town of Edinburgh

In this guide, we’ll discover how this imaginative scheme, built in the 1760s cemented Edinburgh’s position as Scotland’s Capital and gained the city the nickname “The Athens of the North”.

Together with the medieval Old Town, the New Town has been recognised by UNESCO who awarded Edinburgh World Heritage Status in 1995.

Let’s discover more about this unique part of Edinburgh.

The growth of Edinburgh was hindered by building within the confines of the City Wall (we’ll discover more about the Old Town in a later blog). Despite having people living in tall buildings, the city had become overcrowded, crime-ridden and the sanitation facilities were far from ideal! 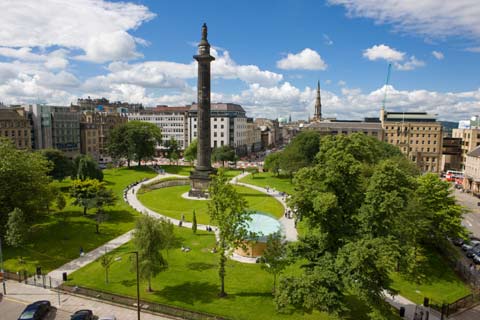 The story of the New Town starts in 1752. A proposal was made to expand the city beyond the walls so the well-to-do members of the population could live in more comfort.

In 1766 a competition was announced which was won by an unknown architect called James Craig, who was aged just 23.

The plan was for a grid-iron pattern of streets running east to west with grand squares at each end. The first resident moved into their house in Thistle Street in 1767, and the development began to take shape. The Council imposed controls on the design of the building facades so all to a uniform height and width.

Famous architects like Robert Adam and William Playfair designed impressive public buildings in the neo-classical style which gave Edinburgh the nickname “The Athens of the North”.

Highlights of the New Town 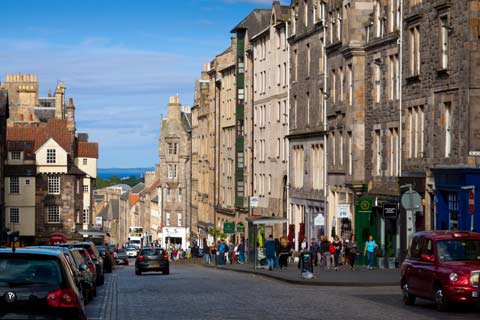 The city centre of Edinburgh City is split into two distinct areas. The medieval Old Town is dominated by the Royal Mile which links Edinburgh Castle and the Palace of Holyroodhouse. Restricted by the city wall, parts of which can be seen to this day, it was a labyrinth of tall buildings and narrow alleyways known as closes. You can get a taste of what life was like here by visiting the Real Mary Kings Close and Gladstone’s Land.

Take a walk across Waverley Bridge, past the train station, to enter the 18th Century New Town. Here the contrast with the Old Town is striking. This jewel of the Georgian period has grand squares, wide streets and exquisite gardens. Although some areas have suffered from unsympathetic redevelopment, the majority of the New Town remains intact.

For many years this grand thoroughfare with panoramic views to Edinburgh Castle and the Old Town was Edinburgh’s main shopping street. Sadly, most of the independent retailers have been replaced with national brands that can be found in High Streets throughout Britain.

One exception is Jenners Department Store, which is an Edinburgh institution. Although now owned by House of Fraser, this venerable institution has been here since 1838. 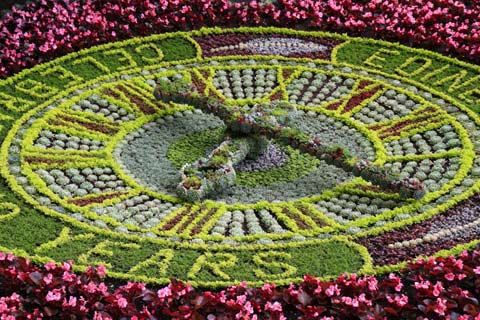 Built-in the 19th Century, on the site of the Nor Loch, these beautiful gardens are an oasis of green space in the bustling heart of the city. Shoppers and office-workers seek refuge to sit, relax and enjoy the views of Edinburgh Castle.

Look out for the Floral Clock, thought to be the oldest in the World. When it’s in full bloom, there are over 24,000 flowers.

If you visit the gardens seek out for the ornate Ross Fountain for the perfect view of Edinburgh Castle towering above.

Before the New Town was built, there was a lake where Princes Street Gardens now stands. It was called the Nor Loch, and it was drained around the time construction work on the New Town started.

To create a link between the Old and New Towns, the Mound was built using rubble from the building works. At the top of The Mound sits the Head Office of the Bank of Scotland, founded in 1695 making it Scotland’s first and oldest bank. 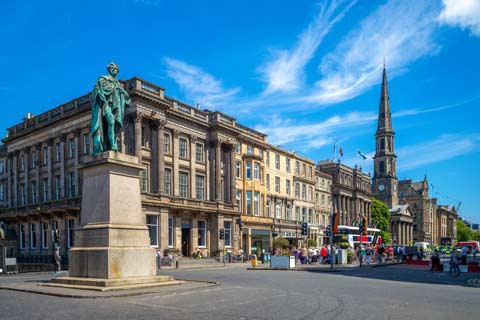 When the New Town was planned, George Street was to be the premier thoroughfare, it was named after the King after all. Situated on top of the ridge, stately George Street linked the two grand squares - St Andrew Square to the East and Charlotte Square to the West.

Originally the street was designed with houses in mind, but by Victorian times shops and showrooms had started to appear. Edinburgh is an important centre for financial services, and many banks had large branches in George Street. Some of these impressive buildings have been converted into bars and nightclubs which sit, side by side, with designer shops and popular restaurants.

The Georgian Houses at 1-11 Charlotte Square were designed by the famous architect Robert Adam in 1791 as a palace of “uncommon finesse”.

The statue in the middle of the square is of Prince Albert, husband to Queen Victoria. The Queen herself unveiled the statue in 1876 and was obviously amused as she awarded the sculptor a knighthood. 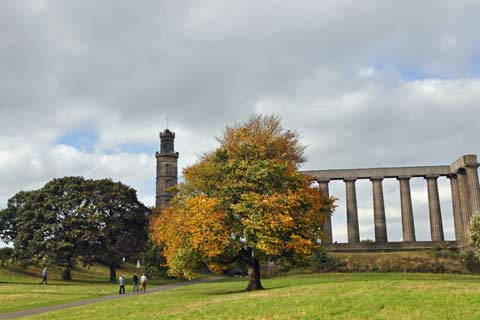 At the east end of Princes Street sits Calton Hill. If you take the trouble to do the climb, you’ll be rewarded with an incredible 360-degree panorama of Edinburgh and the surrounding countryside.

Atop the hill are an eclectic assortment of buildings including the Old Observatory, designed by James Craig (1792) and the later Grecian-styled City Observatory, by William Playfair (1818), which is now an exhibition space.

Look out for the unfinished National Monument, built to commemorate the Scottish soldiers and sailors who died during the Napoleonic Wars. Supposed to be an exact copy of the Parthenon, the money ran out before it could be completed so this is all that was built.

Researching your family tree? Your journey is likely to involve a visit to Register House at the end of Princes Street, the home of the Scottish records. Started in 1774 it still fulfils its original purpose to this day. Even if you’re not tracing your ancestors, it’s worth popping in to see the rotunda with its amazing domed roof, inspired by the Pantheon in Rome.

Outside is a statue of the Duke of Wellington on a horse. It was designed by Sir John Steell and is often referred to as “The Iron Duke in Bronze by Steell”.

This 5-star hotel was opened by the North British Railway Company in 1902. The clock in the impressive 58m tower is always set 3 minutes early to give travellers rushing to Waverley Station below a little extra time to catch their train.

This monument to the famous Scottish author, Sir Walter Scott, was built 12 years after his death. It is 61m tall and at the bottom sits Scott himself with his dog, Maida by his side. Climb the 287 steps to the top for stunning views over Edinburgh towards mighty Edinburgh Castle.

Located in Queen Street, this was the first dedicated portrait gallery in the World when it opened its doors in 1889. Inside you’ll find a display of Scottish life over the centuries from Kings and Queens to Authors and Celebrities. 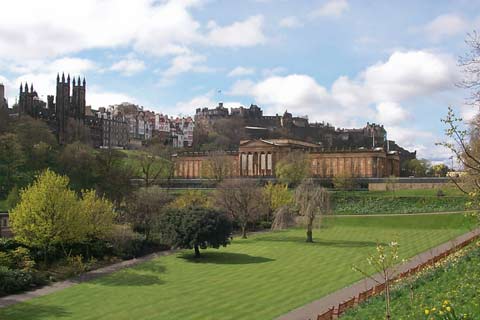 Head to The Mound to visit the Scottish National Gallery, home to one of the finest art collections in the World. See masterpieces by Raphael, Titian and Monet as well as touring exhibitions. An important part of the collection traces the history of Scottish painting.

Sitting beside the Royal Scottish Academy, both these buildings were designed by William Playfair and are superb examples of the neo-classical style.

Discover Edinburgh for yourself with Scottish Tours.