Discover Scotland’s colourful past on this fascinating tour. Visit no less than five of the country’s greatest castles - Brodie, Doune, Dunvegan, Eilean Donan and mighty Stirling. See the iconic battlefield site at Culloden Moor and visit several locations used to film the hit TV series Outlander including the real Castle Leoch and Cranesmuir. Explore the stunning beauty of the Isle of Skye and enjoy a scenic train trip on the famed West Highland Railway Line. All this is just a flavour of what awaits you on this marvellous tour.

Isle of Skye - enjoy a tour of the Winged Isle, including Dunvegan Castle, Kilt Rock and the scenic Sleat Peninsula

Culross - step back in time when you visit this delightful 17th Century village, the setting for Cranesmuir in Outlander

Your Scottish trip starts at 2:00 pm at your hotel. Meet your tour director and set out on a panoramic tour of central Glasgow.

See the main attractions of Glasgow, including red sandstone Victorian buildings, delightful parks, Glasgow Cathedral and the River Clyde, once famous for shipbuilding, especially during the 19th century when the city burgeoned.

Return to your hotel and enjoy free time to rest and relax. Chat with your tour director and fellow travellers about your trip with a welcome drink before dining independently.

Discover the exquisite Royal Palace and the impressive Great Hall. During your guided tour, learn of the many notable people connected with this mighty fortress, including the actual “Braveheart” Sir William Wallace and Mary, Queen of Scots.

Enjoy free time for lunch before travelling to visit Doune Castle, which dates from the 14th Century. Once the home of the Regent Albany and a Royal residence, Doune has played a starring role in several movies and TV series, most famously, perhaps, as Castle Leoch in Outlander.

End the day at delightful Glengoyne Malt Whisky Distillery where, after a tour to discover the traditional method of making whisky, there is a wee taste of the end product. Tonight dinner is served at your hotel.

Travel by the “bonnie, bonnie banks” of Loch Lomond, then journey across mysterious Rannoch Moor.

There is a photo-stop in the heart of Glen Coe, a spectacular glen made famous by the Campbells’ massacre of the Clan Macdonald in 1692.

Stop at Spean Bridge Woollen Mill and drive alongside some of the long, narrow lochs in the Great Glen.

Today cross to the Isle of Skye by bridge to explore this lovely island sometimes called the “Misty Isle”. It has many strong associations with Bonnie Prince Charlie as he fled here after his defeat at Culloden Moor.

Visit Dunvegan Castle, the seat of the Clan MacLeod for 800 years, to see fine paintings, antiques and Jacobite relics.

Tour through the Trotternish Peninsula to view Kilt Rock, a sea cliff with massive, vertical basalt columns and cascading waterfall.

Stop at Kilmuir to see the grave of Flora MacDonald before enjoying free time in Portree. Why not take a walk to admire brightly-painted houses that cluster around the attractive harbour?

Visit Armadale Castle, Gardens and Museum to discover the history of the MacDonalds, known as the Lords of the Isles and the most powerful clan of the Isle of Skye.

Take a ferry to Mallaig on the mainland and transfer to a train for a fun ride through some of Scotland’s loveliest scenery.

The West Highland Line is considered by experts to be one of the finest in Europe, and along the way, you can view Loch Shiel and the Glenfinnan Monument, another reminder of Bonnie Prince Charlie.

The train crosses the 21-arched Glenfinnan viaduct, which was featured in some of the Harry Potter movies.

When we reach Fort William, reboard your coach and drive to Inverness.

Start today with a monster-spotting cruise into Loch Ness to see the picturesque ruins of Urquhart Castle, once Scotland’s largest castle, which was destroyed in Jacobite wars.

Stop at the Culloden Battlefield Visitor Centre to learn about the battle when British Government forces defeated the army of Bonnie Prince Charlie on 16th April 1746.

The Visitor Centre shows the background to this bloody battle, and you can walk around the moorland to see various monuments commemorating troops.

Return to Inverness in time to relax and, after dinner, take a gentle walking tour with a local guide.

Travel to Elgin to discover how cashmere items have been handcrafted at the specialist family-owned Johnstons factory for over 200 years.

Enjoy time for lunch, then visit Brodie Castle, a 16th-century tower house that was the family home of the Bodies for over 700 years. Boasting fairytale towers and turrets, the house contains fine furnishings, paintings, and a library with over 6,000 volumes. There are extensive grounds and pleasant woodland walks to explore.

Later tour back to Inverness and enjoy some free time for a stroll along the River Ness in front of your hotel.

Drive south through majestic Highland scenery to Leault Farm, where there is a demonstration of the teamwork between a shepherd and their dogs as they round up sheep.

Drive south through the high peaks of the Grampian Mountains and stop for a look around the town of Pitlochry and enjoy lunch.

The delightful 16th Century town of Culross acts as the fictional village of Cranesmuir in the Outlander TV series. Enjoy free time to explore the cobbled streets, historic palace and gardens of this ancient royal burgh.

Drive south to Edinburgh, Scotland’s capital, and your manor house hotel on the outskirts. Tonight enjoy a Scottish Evening with dinner, lively singing and story-telling.

This morning explore Edinburgh on a sightseeing tour.

First explore the magnificent Georgian architecture of the 200-year-old “New Town” with its wide streets and elegant squares.

Later cross to the medieval “Old Town” to take a drive along the Royal Mile. Learn about many prominent Scottish inventors, doctors and writers who lived along this ancient route.

Tour the impressive Palace of Holyroodhouse, the official Scottish residence of The Queen, and walk through the majestically furnished chambers.

The balance of the day is free for you to enjoy Edinburgh on your own.

Tours departing between 28 July to 18 August will attend a performance of the Royal Edinburgh Military Tattoo at the Castle esplanade.

How much travelling time will there be between stops?

On an Escorted/Premium Escorted Tour youâ€™ll not be travelling for much more than two hours without a stop.

There are washrooms/toilets at each stop and most coaches are equipped with on-board toilets, however for safety reasons their use is restricted whilst the coach is in motion.

The tour will end in Edinburgh after breakfast on day 10 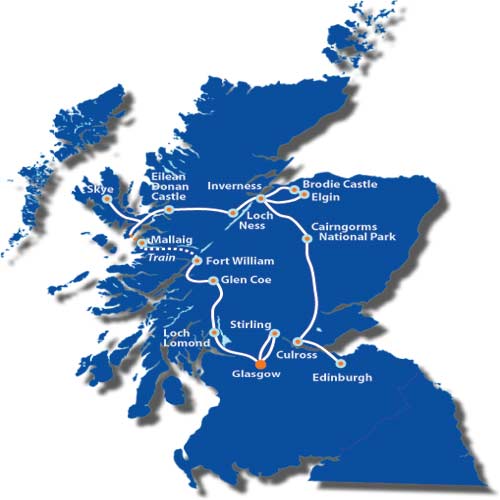 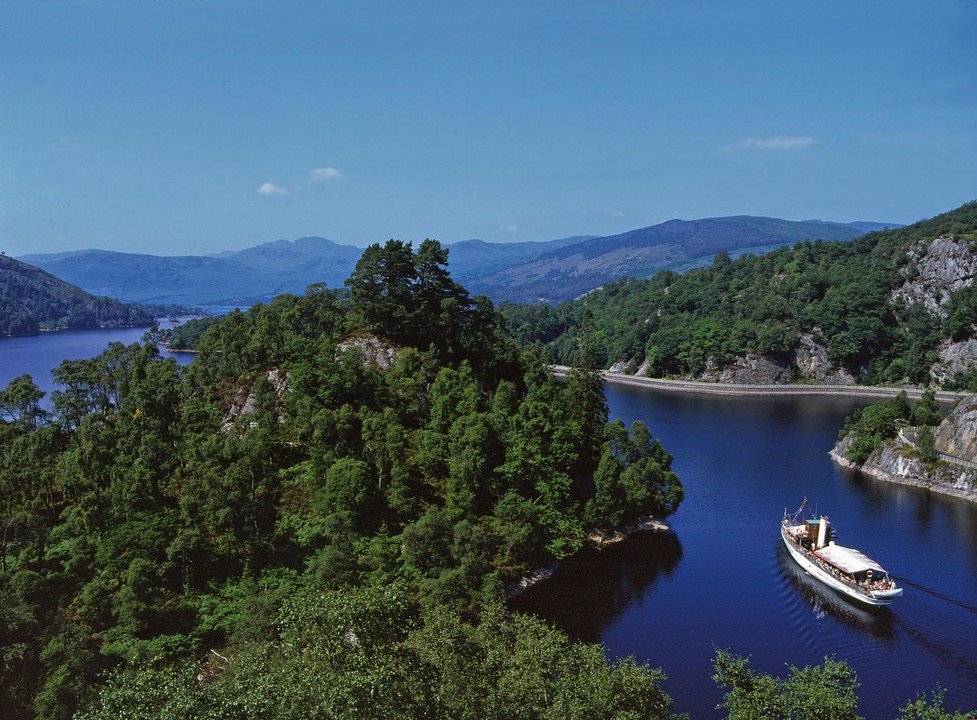 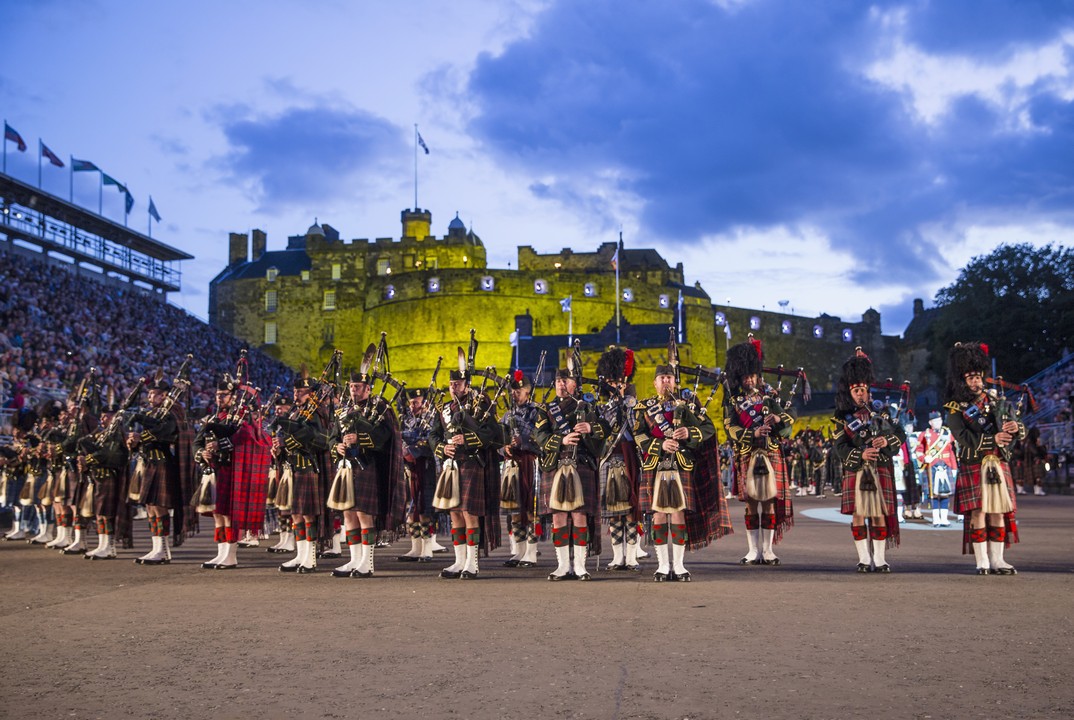 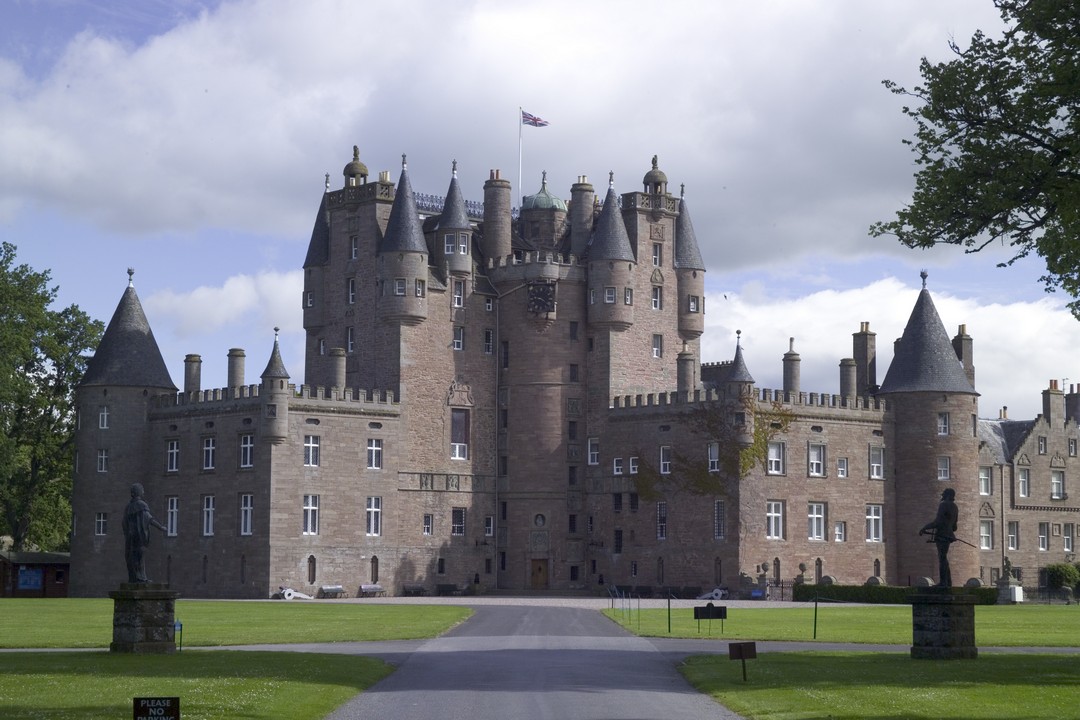