Originally built as a grand residential square George Square has been redeveloped over the centuries as Glasgow's principal civic space. It lies in the very centre of the city and is overlooked by the magnificent City Chambers.

Today we chart the history of this impressive public space and look at some of the many things to do in George Square Glasgow.

Where is George Square Glasgow?

George Square is the Glasgow City Tour's terminus, so if you board the Glasgow bus tour at any of the 20 stops along the route, you will eventually reach the square.

By the end of the 15th Century, Glasgow had become an established academic and ecclesiastical centre. After the union with England in 1707, the opportunity arose to trade with America when great fortunes were made by trading tobacco, sugar and, later, cotton. With the coming of the industrial revolution, the city turned towards heavy engineering. Glasgow became famous as a centre for ship and locomotive building. 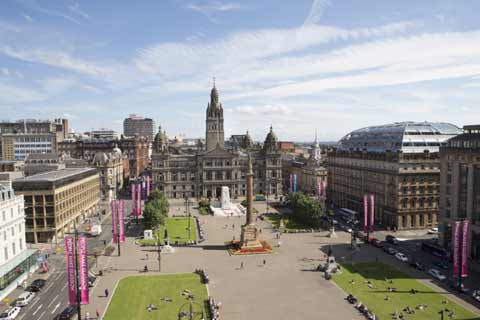 During this time of expansion, Glasgow generated great wealth. The city became known as the "Second City of the British Empire", and many significant public buildings were constructed to prove the point.

Around 1772, some swampy land that belonged to Ramshorn Croft was bought by Glasgow Corporation. It was filled with dirty green water and was used as a place to slaughter horses. After almost a decade work commenced on transforming the area into a grand residential square with private gardens in the centre.

George Square opened in 1787 and was named after King George III. There was going to be a statue of him in the centre of the square, but after America declared independence from Britain in 1776, and Glasgow's tobacco trade was lost, the plan was quietly dropped.

Glasgow Corporation bought the square in 1876, and the private gardens were opened to the public. 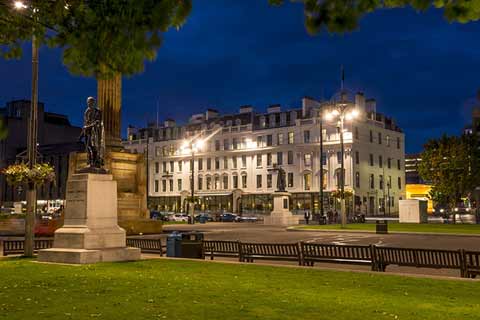 The buildings that are now the Millennium Hotel are all that is left of the original residences that lined the square. This terrace was built between 1807 and 1818 as merchants townhouses.

The most famous event to have taken place at the hotel was in 1941 when Winston Churchill met President Roosevelt's special envoy, Harry Hopkins, to discuss the determination of the British to continue fighting the Nazis during World War 2 and the likely effect of American assistance.

The eastern side of George Square is dominated by the exquisite City Chambers, which is the headquarters of the local government. This grand edifice is both a working and a ceremonial building and is the meeting place for the City Council. The office of the Lord Provost is also located here. 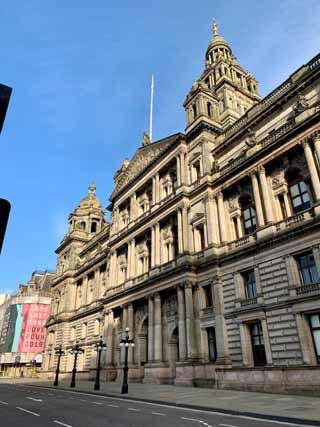 When was Glasgow City Chambers built?

The construction of the City Chambers took place between 1883 and 1888. The competition to design the building was won by a Paisley born architect, William Young.

The building's interior design is in the Italian Renaissance style with stunning granite columns, mosaics, and marble staircases. The banqueting hall is incredibly elaborate, with stained glass windows and a breathtaking arched ceiling.

The interior of the city chambers was built to impress and celebrates Glasgow's greatness during Queen Victoria's reign over the British Empire. 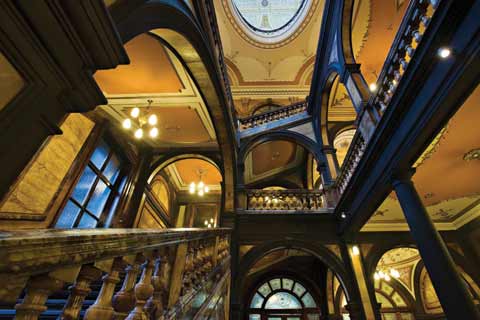 It's possible to join a council officer for a guided tour of the City Chambers. Tours operate twice daily, Monday to Friday and are free of charge. Tickets are issued on a first-come, first-served basis, and each tour lasts around 45 minutes.

Due to Covid-19, tours have been suspended temporarily. You can check the status on the Glasgow City Council website.

There are 12 statues in George Square, including monuments to Robert Burns, Queen Victoria and James Watt. 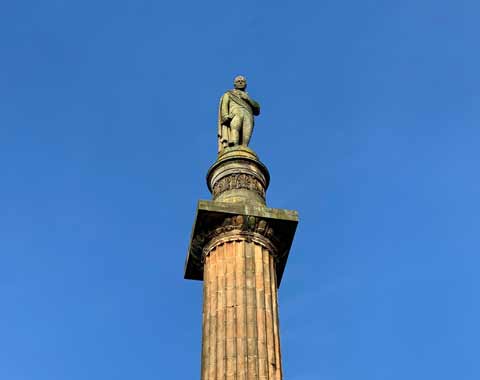 In the centre of the square, at the top of an 80 foot (24 m) Doric column, is a statue of Sir Walter Scott. The famous author wrote many popular novels, including Rob Roy, Ivanhoe and The Lady of the Lake.

This was the first public monument to Scott and predates Edinburgh's grander memorial by almost a decade.

Celebrated as Scotland's national poet or Bard, he was born in Alloway and died in Dumfries. He is famous for writing Auld Lang Syne, which is sung throughout the World at New Year. The statue was paid by public subscription, with over 40,000 people contributing a shilling (5p) each. 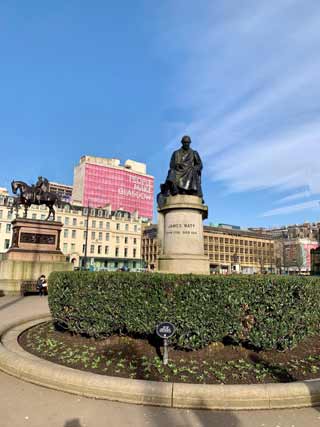 Born in Glasgow, he is considered the father of Colloid Chemistry. He became the Master of the Mint and introduced the bronze penny to our coinage.

The statue was paid for and erected by one of his former students, James "Paraffin" Young, father of the shale-oil industry.

As the Prime Minister of Great Britain. Peel repealed the Corn Laws, which restricted the import of foodstuffs. He created the Metropolitan Police in London, which is why British Police are known as "Bobbies". He was elected as Rector of Glasgow University. 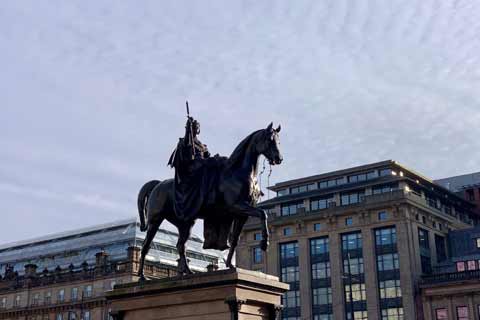 Queen Victoria reigned from 1837, when she was crowned at the age of 18, until she died in 1901. This statue of Queen Victoria riding a horse was built to commemorate her first visit to Glasgow in 1849.

In 1866 a statue of Prince Albert, husband of Queen Victoria, was unveiled by Alfred, the Duke of Edinburgh when he was given the Freedom of the City.

Albert had died in 1861, and it was felt that a significant industrial city, such as Glasgow, should have a prominent statue commemorate his life.

Now the equine statues of Victoria and Albert stand side by side on the square's west side. 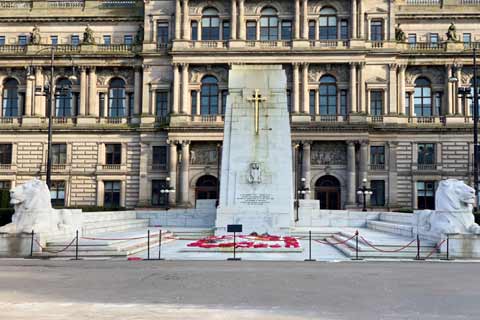 Built directly in front of Glasgow City Chambers, this sombre memorial remembers Glasgow's fallen during the Great War of 1914-1918. It is believed that around 200,000 Glasweigan's joined up to fight in World War I, with some 20,000 of them being killed.

The Cenotaph is the focus of the Annual Remembrance Ceremony when Veterans, Civic Leaders and Clergy lay their wreaths at the Stone of Remembrance.

The Cenotaph's location in George Square marks the spot where soldiers were recruited by successive Lord-Lieutenants and marched off to war. It's also the place where those soldiers who returned took the salute.

The Glasgow City Bus Tour departs from George Square and offers visitors a unique vantage point to see the city's many attractions. There are 21 conveniently located stops, making it really easy to hop-off to visit a museum or art gallery, then join a later bus to continue the tour.

Amongst the many varied places served are Kelvingrove Art Gallery and Museum, Glasgow Green, Riverside Museum and the Glasgow Science Centre.

Day tickets are valid for 24 hours from the time of issue so can be used on consecutive days. 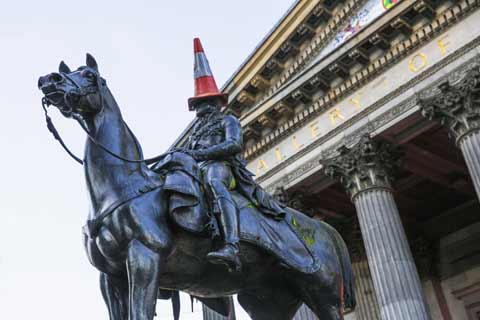 At Royal Exchange Square, just a short walk from George Square is the Gallery of Modern Art. It contains four galleries that display works by local and international artists from the city's extensive collection.

This impressive building was originally constructed in 1775 as the city home of William Cunninghame, one of the famous "Tobacco Lords", as these wealthy merchants were known.

The building has been a bank, the Royal Exchange and a public library before taking on its current role in 1996 as modern art GOMA.

The Duke of Wellington Statue Glasgow

Outside GOMA is a statue of the Duke of Wellington on his famous horse Copenhagen. It was erected in 1844 to a design by the Italian artist Carlo Marochetti.

The statue is usually adorned with a traffic cone. Many visitors think that this is a modern art installation, but it's really just a high jinx that has been ongoing for the last 30 years or so!

We make it easy to discover the best of Glasgow with our award-winning tours. From London, we offer two-day overnight tours to Glasgow or combine the delights of the city with a full-day excursion to Loch Ness and the Highlands with our exceptional three-day package.

Whether you're planning to hunt monsters at Loch Ness or immerse yourself in ancient Scottish culture, our tours will help you discover the very best of our stunning country.