:At this time of year, we would typically gather with friends and family to link arms and sing a song, the words of which few people will understand, to bid farewell to the year gone past and celebrate the start of the new year.

Our New year celebrations will be a bit different this year, of course, but you are sure to hear one particular tune being played on radio and TV programmes throughout the World, just like usual.

How did this Scottish folk song come to embody the spirit of New Year? Let us discover the fascinating story and raise a glass to Auld Lang Syne.

What is Auld Lang Syne? 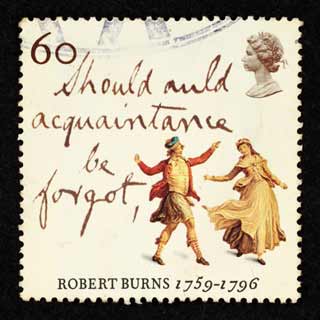 Written in Scots, the language traditionally spoken in the east and south of Scotland, Auld Lang Syne means “old long since” and reflects on the good old days. This nostalgic sentiment appeals particularly as we look back on the year that has come to an end and look forward to the year to come.

How do you pronounce Auld Lang Syne?

The correct way is to pronounce the S in “Syne”, rather than Zyne. In phonetics it’s: /ˌɔːld læŋ ˈsaɪn/ The famous Scottish poet Robert Burns (1759 - 1796) was keen to preserve the Scots language after Scotland and England created the United Kingdom in 1707. He travelled throughout Scotland collecting the old songs and poems traditionally passed through the generations by word of mouth.

Although he is credited having written the lyrics to Auld Lang Syne, Burns admitted that he had heard the first three verses of the song from an old man he had met on his travels in 1788. The second publisher was George Thomson, who had a talent for matching lyrics to tunes by established composers such as Haydn and Beethoven. He chose to pair the poem to a different melody in his collection “Select Scottish Airs” and the song that we sing today was born.

Why do we sing Auld Lang Syne?

The song has always been popular in Scotland, and it’s thought that it gained widespread popularity when it was sung by emigrant Scot’s who had settled in the New World. The song was picked up by the Canadian bandleader Guy Lombardo who performed a New Year’s Eve show on the radio, then later on television, from 1929 until the mid-1970s. Each year Lombardo and his band, the Royal Canadians, played Auld Lang Syne to celebrate the new year.

The broadcast of the song into millions of homes made it extremely popular. The song also appeared in several sentimental films including It’s a Wonderful Life (1946) and When Harry Met Sally (1989) thus cementing its place in popular culture.

The song is now sung throughout the World stirring up feelings of friendship and belonging, all tinged with a little melancholy.

Who has the best rendition of Auld Lang Syne?

Well, there are so many to choose from. After all, everyone from Patti Labelle to Jimmy Hendrix has performed a version of the song. To hear the original version of the song you might want to find a copy of Eddi Reader Songs of Robert Burns. It makes an interesting comparison to the tune we all know and sing.

You might be forgiven for wishing to bid farewell to 2020 as quickly as possible, and we wouldn’t disagree. As we look towards a happier year ahead, the spirit evoked by Auld Lang Syne, based on friendship and happier times appear particularly appropriate this New Year.

All of us at Scottish Tours wish you good health and happiness in 2021.