Outlander has changed the face of Scottish tourism.

According to VisitScotland tourist numbers have increased by a whopping  67% at Outlander filming locations since 2013. As the show continues to grow in popularity, so do the filming locations dotted throughout Scotland.

From there, the story takes exciting twists and dramatic turns through Scottish history, and the show never misses an opportunity to allow the viewer to stop and admire some of Scotland’s most spectacular castles and landscapes along the way.

Adapted from the best-selling book series by Diana Gabaldon, the story follows Claire Randall who is mysteriously transported back in time to 1743 after she touches a strange stone circle in the Highlands of Scotland. She meets Jamie Fraser, a Scottish soldier and future Laird of ‘Lallybroch’.

Outlander provides the perfect opportunity to showcase some of the most incredible locations Scotland has to offer. We offer a range of Outlander themed tours from 1 to 15 days in length.

Continue reading to explore some of the best real-life Outlander locations that are guaranteed to prepare you for your own Scottish trip back in time.

For anyone who hasn’t seen the show, please note that there will be some plot spoilers throughout this article. 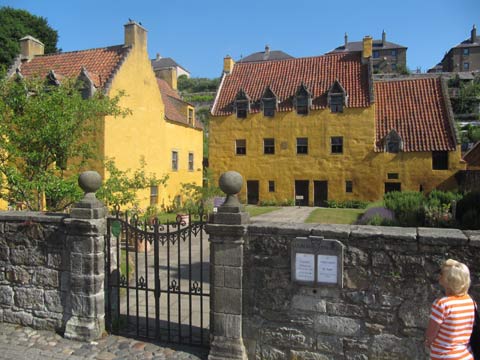 The picturesque royal burgh of Culross in Fife is well-known among Outlander fans as Cranesmuir. In the show, the fictional village is situated nearby to Castle Leoch and is the location where a number of important plotlines develop.

Culross is a great place to take a relaxing stroll along the high street which spans from the kirk at one end to the town square at the other end. During your visit, don’t forget to take a trip to Culross Palace full to brim of period artwork and intricate secret passageways.

You don’t need to be an avid Outlander fan to recognise the iconic ‘Lallybroch’, which serves as the family estate and ancestral home of Jamie Fraser.

In real-life, the ruined 15th-century tower house is known as Midhope Castle. Ever-growing popularity in the Outlander TV show has inspired many tourists to go searching for the coveted castle and get a look at it for themselves.

It’s important to know before visiting that access to this site is very carefully controlled and you will need a vehicle pass to enter. Don’t fret - let our expert team take care of the arrangements by hopping aboard the Outlander Experience tour by Scottish Tours.

Located just a short distance from Queensferry in the small hamlet of Abercorn, this filming location is an absolute must-see for fans of the show. 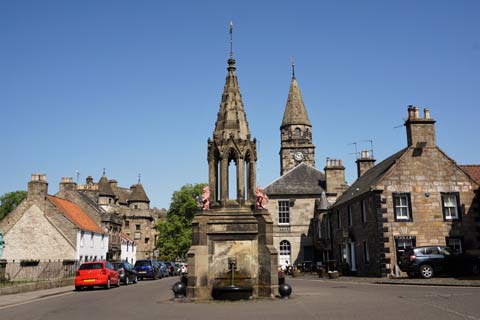 Falkland in Fife is famed for its beautiful and picture-perfect palace. Built in the early 16th century by James IV and James V, Falklands Palace would have been among one of the most impressive pieces of architecture of its time.

Even today the town of Falklands looks as if time has stood still there. For the Outlander TV show, it’s easy to see why this was the perfect place for scenes set in Inverness during the 1940s.

Fans of the show will be walking through very familiar territory during a visit to this quaint little Scottish town.

This is the location of the mysterious stone circle that transports Claire Randall from 1945 to 1743. Known in the show as ‘Craigh na Dun’, the real spot can be found near Inverness in Kinloch Rannoch and Rannoch Moor.

Unfortunately for fans of the show, the ancient stone circle doesn’t really exist so there won’t be any accidental trips back to the 18th century on this tour!

The spectacular mountains, rolling glens and stunning waterscapes make for an unforgettable experience all the same. There's a good reason for the Great Moor of Rannoch being considered as one of the last remaining wildernesses in Europe.

In the show, Wentworth Prison is a castle situated in the Scottish Borders. In the first season of the show, Jamie stands trial here and is sentenced to hang by the notorious Jack Randall.

But, did you know that Wentworth Prison was actually filmed at Linlithgow Palace?

As the birthplace of Mary Queen of Scots in 1542 and one of the main residences of Scottish monarchy throughout the 15th and 16th centuries, Linlithgow Palace has a notable past throughout Scotland’s history.

Clava Cairns and Culloden (The Inspiration Behind ‘Craigh na Dun’) 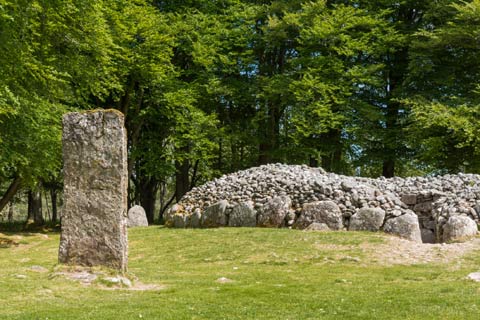 The Clava Cairns (otherwise referred to as the Prehistoric Burial Cairns of Bulnuaran of Clava) are three Bronze Age cairns located near Inverness served as the primary inspiration for ‘Craigh na Dun’.

The exceptionally well preserved prehistoric site is a fantastic example of Scottish life, culture, and customs from 4,000 years ago.

After paying a visit to this site, it will be easy to see how Diana Gabaldon found inspiration for her unique and captivating stories. You’re guaranteed to feel like you’re in an episode of the show yourself at the ancient Clava Cairns.

Just a short drive away, you’ll encounter the famous village of Culloden, where the historic final confrontation of the 1745 Jacobite Uprising took place. Every Outlander fan should pay a visit!

The exterior of Doune Castle was used in Outlander as the fictional ‘Castle Leoch’ - home to Clan Mackenzie in the Scottish Highlands.

Doune Castle has also been the filming location for Winterfell in the first episode of Game of Thrones as well as being heavily featured in Monty Python and the Holy Grail.

Fans of TV shows and movies alike will not be left disappointed after a visit to the iconic Doune Castle. 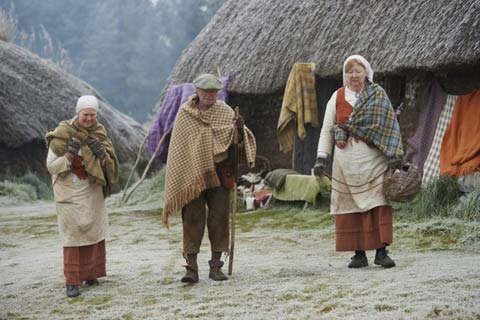 Featured in the Season 1 episode ‘Rent’, the Highland Folk Museum in Newtonmore was the perfect location for a typical 18th-century Highland settlement.

The Highland Folk Museum is an open-air visitor attraction 45 miles south of Inverness. Originally opened in 1995, the museum portrays life in the Scottish Highlands through history with exhibits that simulate how people lived in the Highlands of Scotlands as far back as the 1700s.

The 18th century Highland township at the Highland Folk Museum was used as a filming location in 2014, so avid Outlander fans will recognise the distinct thatched roofs from scenes where Claire and Jamie visited prior to the Jacobite Uprising of 1745.

Our popular 2 day/1 night Outlander Trail Small Group Tour will give you the chance to explore this fascinating museum as well as many other filming locations.

Are you ready to get ‘set-jetting’?

You loved the TV show, now it’s time to fall in love with the country it was filmed in.

We pride ourselves on delivering award-winning and expert tours every time at Scottish Tours. We want to help you discover the most iconic Outlander filming locations in the incredible country that we call home.