From ancient pack-horse crossings to sweeping engineering marvels Scotland is home to a fantastic array of bridges, both large and small. Plan your next visit to Scotland, so you'll have the chance of visiting at least one of our famous crossings.

In this fascinating guide, we look at some of the most famous Scottish bridges. 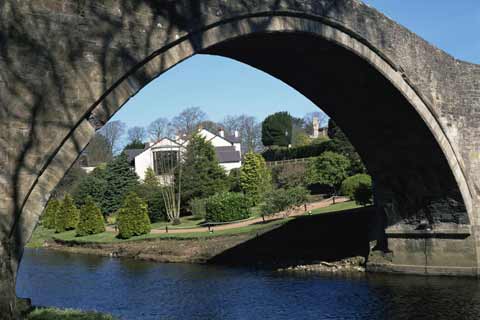 Located in the village of Alloway in Ayrshire this 15th Century cobblestone bridge spans the River Doon. "Auld" is a Scots word for old and "brig" means bridge.

This attractive bridge is so famous that it appears on the Bank of Scotland £5 banknote.

The legendary Scottish poet, Robert Burns, was born in Alloway in 1759 and he refers to the bridge in his famous poem "Tam o' Shanter".

It is also thought that the bridge gave its name to the popular Lerner and Lowe musical "Brigadoon", although the village itself was purely fictional.

Considered to be the oldest bridge in Scotland, legend has it that Bishop Henry Cheyne started work on the Brig o'Balgowrie towards the end of the 13th Century and that Robert the Bruce completed it.

The bridge we see today, crossing the River Don near Old Aberdeen and lovely Seaton Park, dates from the early 17th Century. It was built using the silvery grey granite that the city is famed for. 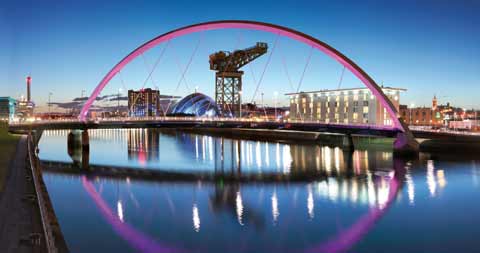 Opened in 2006, the bridge is one of the 21 that crosses the River Clyde in the Glasgow area.

It features an impressive metal arch and links the SEC campus, including the impressive SSE Hydro Arena, on the north bank to the south's media village.

Unusually the bridge spans the River Clyde at an angle giving the crossing its nickname of "The Squinty Bridge".

Around 10 miles south of Oban lies the Island of Seil, which is famed for its beautiful scenery and wealth of history. To reach this picturesque island visitors cross the steeply humped Clachan Bridge, known locally as "The bridge over the Atlantic". 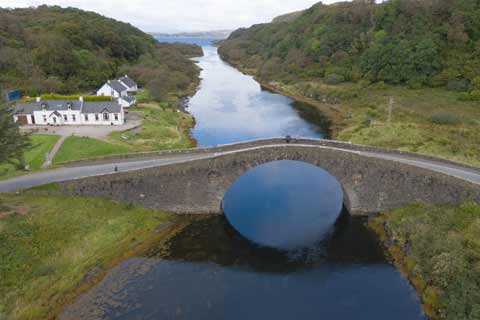 How did this historic bridge get such an unusual name? Well, this bridge crosses the Clachan Sound which opens out into the Atlantic Ocean. It was built in 1792 by engineer Robert Mylne to the plans of local architect John Stevenson.

After crossing the bridge from the mainland, the first building reached is the historic Tigh an Truish inn. The name means house of trousers in Gaelic and dates from the period immediately after the 1745 Jacobite uprising when the wearing of tartan and the kilt was banned. Islanders travelling to the mainland would call at the inn to change from their traditional highland garb into trousers. 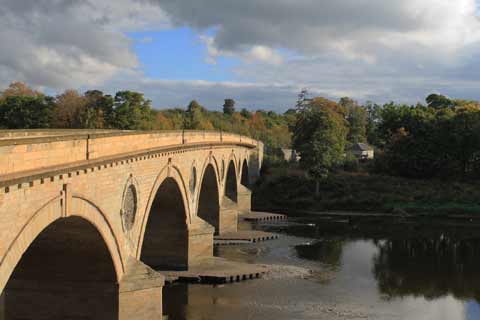 This handsome seven-arched bridge spans the River Tweed linking Scotland to England. Before the bridge was completed in 1767, the only way to cross the river was by ford. The town of Coldstream came into being because it was the first suitable crossing point on the river north of Berwick.

Over the centuries the people of Coldstream would witness the armies of Scotland and England make their way across the border to meet in battle.

One infamous crossing took place in 1513 when the Scottish army led by King James IV marched to meet the English forces commanded by the Earl of Surrey at nearby Flodden Field. By the time the Battle of Flodden ended some 10,000 Scots had died, including the King and most of his nobles.

The closeness of the English border made Coldstream a destination for eloping couples who would secretly get married in the tollhouse, just across the bridge in Scotland.

This magnificent structure is of such significance that UNESCO has listed it as a World Heritage Site. It is one of Scotland's most recognised landmarks and carries the railway line across the Firth of Forth northwards from Edinburgh into the Kingdom of Fife. Around 200 trains cross the bridge every day carrying some 3 million passengers annually. 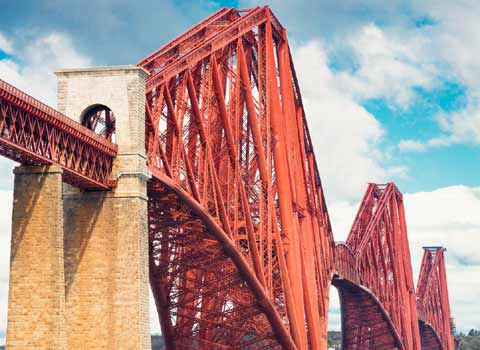 When was the Forth Rail Bridge built?

The Forth Bridge, as it is officially known, was built by the North British Railway and officially opened on 4 March 1890.

Traditionally painted red, the herculean task of "painting the Forth Bridge" has become a popular cliché for a never-ending task. New painting techniques mean that the latest coat will last for at least 25 years ending the tradition of continual painting.

There are now three bridges crossing the Firth of Forth and spanning three centuries. The Forth Rail Bridge of 1890 has been joined by the Forth Road Bridge in 1964 and the Queensferry Crossing in 2017. 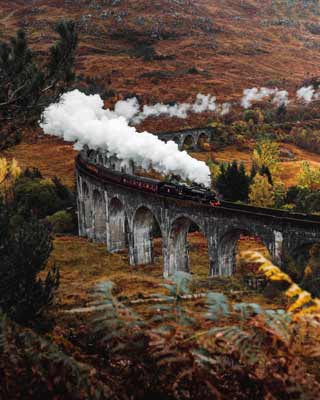 Instantly recognisable, thanks to its many TV and film appearances, the Glenfinnan Viaduct is a remarkable structure extending 1,000 ft (305 m) in length. There are 21 arches, the highest of which is an impressive 100 ft (30. 5 m) tall.

Where is the Harry Potter Bridge?

The Glenfinnan Viaduct is part of the scenic West Highland railway line between Fort William and Mallaig. The viaduct is situated at the head of Loch Shiel looking out over the evocative Glenfinnan Monument.

The Jacobite Steam Train, which played the part of the Hogwarts Express in the Harry Potter films, operates a twice-daily service carrying passengers on the journey of a lifetime.

If you'd like to experience this World-famous trip for yourself check out our very special one-day tours from Edinburgh and Inverness featuring a journey on the Jacobite Steam Train. 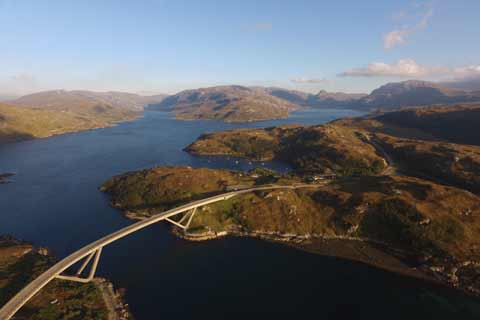 The elegant Kylesku Bridge is an important landmark on the famous North Coast 500 tourist route. It carries the road between Scourie and Inchnadamph across the deep-sea entrance to Loch a' Chairn Bhaine.

The bridge's architecture is of such significance that Historic Environment Scotland has awarded it Category A status.

In 2019 the bridge was legally renamed into Gaelic, the first such name change in Scotland. The Gaelic name for the bridge is Drochaid a' Chaolais Chumhaing.

If you're not a fluent Gaelic speaker, don't worry Kylesku Bridge can be used equally well. 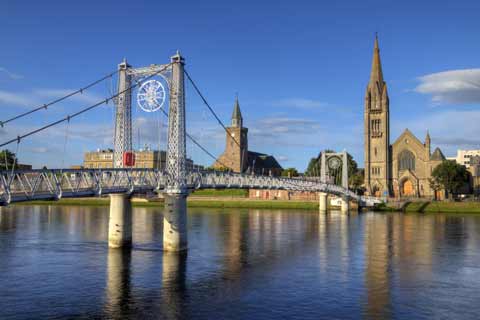 The Grieg Street Bridge, to give the crossing its proper name, dates from 1881 and provides a pedestrian route across the often-fast flowing waters of the River Ness in central Inverness. The span is an impressive 61.3 metres.

This elegant suspension bridge is known locally as "The Bouncy Bridge" as it has a tendency to bounce up and down as pedestrians reach the middle point!

The views from the bridge towards Inverness Castle are very attractive, particularly in the evening, when the castle is floodlit.

The original Carr Bridge, which spans the River Dulnain, was built in 1717 by a local stonemason called John Niccelstone. It was constructed to provide access for funeral parties to Duthil Churchyard and quickly gained the local nickname of "The Coffin Bridge".

In 1797 a "new" bridge was built, which has since been replaced by a more modern structure.

For centuries, the only way to access the Isle of Skye was to take a ferry. The shortest crossing was from Kyle of Lochalsh to Kyleakin, and even though the frequent service was operated by large vessels, there were often long tailbacks during the summer months. 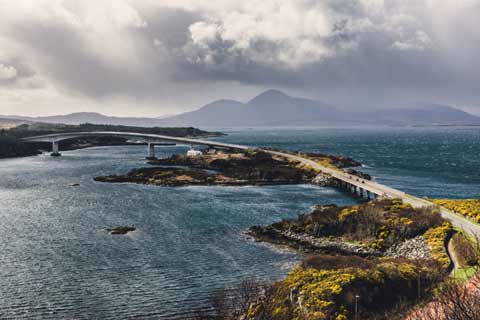 In 1992 work started constructing a new bridge to Skye. The crossing is built in two parts with the first section being from Kyle of Lochalsh on the mainland to the little island of Eilean Ban, home to the famous naturalist Gavin Maxwell who wrote "Ring of Bright Water".

The second section is a graceful single-span concrete arch bridge which crosses the Kyle at up to 35 metres high.

When the bridge opened in 1995, there was great controversy as an expensive toll was charged to cross the bridge in either direction, after a substantial amount of local and national pressure the charge was abolished in 2004 and the bridge is now toll-free. 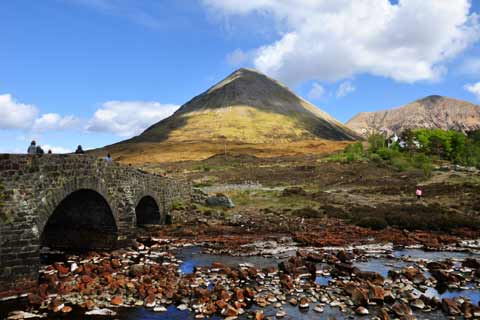 With a stunning backdrop of the mighty Cuillin Mountains, the attractive Sligachan Bridge has appeared in countless holiday snaps.

It was built between 1810 and 1818 by the famous engineer Thomas Telford and uses three arches to span the water that flows from the heart of the Cuillin mountains into Loch Sligachan.

Sligachan is an important junction where the main road to Portree meets the west coast route to Dunvegan and Bracadale. It was the site of regular cattle marts, and in 1830 the Sligachan Hotel was built here and has served travellers and walkers ever since.

The water that flows under the bridge is said to have the gift of eternal beauty. According to legend if you dip your face into the water for seven seconds, let it dry naturally you will be granted eternal beauty.

Although this is the smallest bridge in our review, it packs a mighty punch. For centuries the Swilcan Bridge has spanned the burn which flows across the 1st and 18th fairways of the famous Old Course at St Andrews.

It has played witness to 29 Open Championships and some of the most significant events in golfing history. 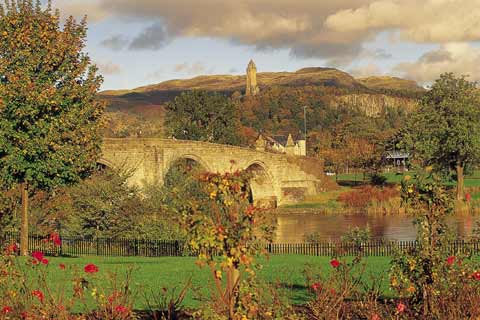 One of its predecessors was where the Scottish army of William Wallace defeated the forces of King Edward I in 1297. You can discover more about this famous battle in our recent Stirling blog.

The bridge we see today originally had arched gates at each end, but it is thought they were removed when the Governor of Stirling Castle, General Blackeney, ordered the south arch to be destroyed to delay Bonnie Prince Charlie and his army as they marched southwards during the 1745 Jacobite Rebellion.

It's Time to Book Your Scottish Holiday with Scottish Tours!

Now is an excellent time to start planning your next Scottish travel experience. Just think what exciting adventures these iconic bridges could lead to.

With Scottish Tours, all the hard work is done for you. We plan unforgettable trips and make sure you don't miss a thing.

Book online today and travel with confidence, with Scottish Tours.