How to plan a traditional Burns Supper

Across the world, fans come together to celebrate Robert Burns birthday on 25 January 1759. Scotland’s national poet was born at a simple thatched-roofed cottage in Alloway, Ayrshire but his influence can be felt worldwide.

In 2021, due to social distancing, organised Burns Night events have been put on hold. However, that’s no excuse not to add a bit of fun to dreary January. In this light-hearted guide, we look at how you can perform your own traditional burns night supper or join one of the online events that are taking place this year.

Who is Robert Burns Robert Burns was born in rural Ayrshire in 1759. From these very humble beginnings he became Scotland’s National poet, writing poems and songs in English and Scots.

What was it about Robert Burns life that gained him this status?

In his early years, Burns read poetry and became inspired by Scottish folk tales and songs while working on his father’s farm.

In 1784 his father died, and Burns inherited Mossgiel Farm. The farm wasn’t a success, and soon Burns was in financial difficulties, so much so that he considered emigrating to Jamaica. 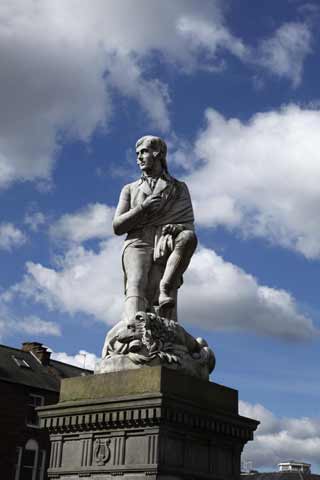 To make some money, Burns published an edition of his poems called Poems, Chiefly in the Scottish Dialect. It was a financial and critical success, and Burns was persuaded to move to Edinburgh where he became the toast of genteel society.

For the next two years Burns toured Scotland and, having given up his emigration thoughts, moved to Dumfries to become an exciseman. He continued writing poems and songs during his time here, which many critics regard as his best work.

Unfortunately, ill health and a habit of heavy drinking took its toll, and Robert Burns died in 1796 aged just 37 years of age.

Despite his rural Scottish upbringing, the appeal of Burns work extends far beyond these shores. He is credited with writing beautiful love songs such as “Ae Fond Kiss” and “A Red, Red Rose”. His most famous work is almost certainly “Auld Lang Syne”, which is traditionally sung at New Year. This is reputed to be the second most sung song globally, after “Happy Birthday”.

The first Burns Supper took place in 1801 just five years after his death. Nine friends and patrons got together at his birthplace in Alloway to celebrate his life and work.

The format of that first event established the pattern of how Burns Suppers are organised today.

The evening typically starts with guests mingling over drinks, often to the accompaniment of traditional Scottish music. In larger events, there may be a top table where the officials and speakers sit. It’s a tradition that those sitting at the top table be led into the room by a piper.

If you’re staging a Supper at home, it would be good to ask Alexa to play some stirring bagpipe music as you take your seats at the table.

Once everybody is seated “The Chair” will welcome everyone to the event and introduce the speakers.

Before proceedings start, a short prayer by Robert Burns called "The Selkirk Grace" is read.

What would you eat at a Burns supper?

The focus of the menu is on hearty Scottish fayre. A traditional soup such as Scotch Broth, Cock-a-Leekie or, good old-fashioned, Lentil is served as the starter. Just what’s needed to warm you up on a cold January night. The main course is haggis, neeps and tatties, of course. By the way, neeps are turnip and tatties potatoes, both are served mashed. If you’re not a meat-eater, then you’ll find vegetarian versions to be widely available.

If we really can’t persuade you to have haggis as the main course, you could always have a small taste as a starter and choose another dish such as steak pie or Scottish salmon to follow.

As for dessert, there are a few options you could consider. A traditional fruit trifle always goes down well, particularly with the younger family members. If you’re in the mood for something a little more sophisticated try cranachan, a delightful concoction of oatmeal, raspberries, cream and whisky. What drinks to serve

It’s normal to refrain from abstemiousness at a Burns supper, so wine and beer are served with the meal. True haggis aficionados will enjoy theirs with a whisky sauce, which is code for a dram of whisky being poured over the haggis!

After dinner, it’s traditional to serve a fine malt whisky as a digestif.

Of course, you can enjoy Burns night with or without alcohol, the choice is entirely yours.

How to address the haggis

The arrival of the haggis is a theatrical affair which is a spectacle and great fun. If you would like to try it at home, this is how things are done. Firstly, the haggis is piped into the dining room in a parade that includes the chef, carrying the haggis on a serving platter and the person who will address the haggis. It’s usual for the audience to clap as the procession makes its way around the room to the table.

The person addressing the haggis will take the floor and using exaggerated gestures read Robert Burns famous poem “To a Haggis”.

At the appropriate point in the poem, they plunge their knife into the haggis cutting it in half, so the smell of the freshly cooked delicacy permeates the room, and some of the contents spill out onto the serving dish

After reading the last line of the poem ”Gie her a haggis!”, there is rapturous applause followed by a toast to the haggis.

After dinner, there is a reading of a poem or a musician playing or singing one of Burns songs. This is called the first entertainment.

The evening’s first speech is called “The Immortal Memory” and is all about Robert Burns, his life, loves, highs and lows. Most importantly, it highlights his patriotism and love of Scotland.

A good speaker will weave humour, references to current events and a genuine admiration of Burns into a speech that will hold the audience spellbound. 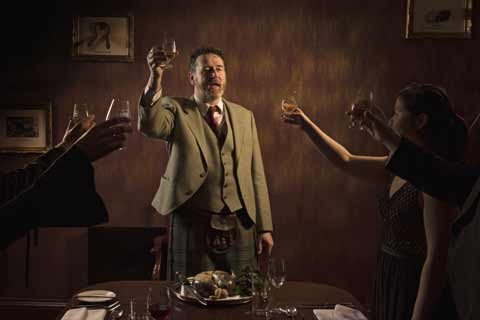 Toast to the Lassies

Following another song or poem (the second entertainment), there is a second speech and toast to women’s role in the world today. Again, humour will be to the fore and may well reference some members of the audience.

The speaker will quote examples of Burns work to illustrate the points in their speech which ends with an enthusiastic toast “to the lassies!”.

Reply to the Toast to the Lassies

After the evening’s final entertainment, the women present have the opportunity to respond to the earlier toast.

The traditional gatherings to celebrate Burns Night, both large and small, have had to be shelved for this year. That’s a real shame as many were used as a fundraising activity for all manner of good causes.

Many have moved online this year, so here are a selection for you to consider: 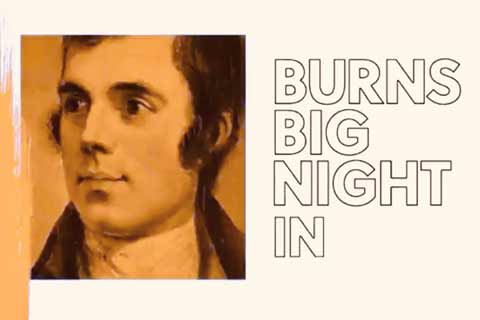 Burns Big Night In with National Trust for Scotland

Hosted by Edith Bowman, this event includes music from Talisk, a cocktail masterclass from The Glenlivet and expert insight into the life and times of Robert Burns from the team at NTS.

Join the Beatson Bard for a fun-packed programme in aid of the Beatson Cancer Charity. Your host is Alison Walker and music is provided by the Red Hot Chilli Pipers. There are special guest appearances too.

Tickets can be purchased from Beatson Cancer Charity. Broadcast live at 7 pm on 25 January 2021 on the SBH Scotland website and available to watch digitally for a week afterwards.

Join comedian Karen Dunbar and Dr Rachel Barrie from Benriach Distillery on the Macsween Facebook page at 7 pm on 25 January 2021.

If you would like to explore the real Scotland, why not choose the perfect holiday with Scottish Tours.

We’re here to help you explore our beautiful country in style with unbeatable pre-planned tours and iconic locations.

Whether your choice is a one-day trip into the beautiful Scottish Highlands or a fully-immersive exploration of Scotland’s scenic islands, our award-winning tours make it easier than ever to explore the infinite beauty of Scotland.