Top things to do in St Andrews

The medieval town of St Andrews Scotland is famed as "the home of Golf", but there is much more to this pleasant seaside town. Of course, the game of Golf is an essential part of the town's DNA, but you'll also find meaningful academic and religious connections too.

In this helpful guide we'll look at the many attractions St Andrews has to offer visitors as well as some delightful places of interest nearby.

Where is St Andrews?

St Andrews is a coastal town on the east coast of the ancient Kingdom of Fife. It sits on the scenic Fife Coastal Tourist Route and is easily reached on a bus tour from Edinburgh.

The drive from Edinburgh to St Andrews, which includes a crossing of the Forth estuary, is a leisurely 2 hours or so.

There is no railway station in St Andrews, so if you want to travel by train, you'll need to alight in Leuchars and take a bus from there into town.

How did St Andrew become the patron saint of Scotland?

Andrew was one of Jesus Christ's Twelve Apostles. Like Jesus, he met his death by crucifixion, but on an X-shaped cross. After his death, his remains became holy relics. 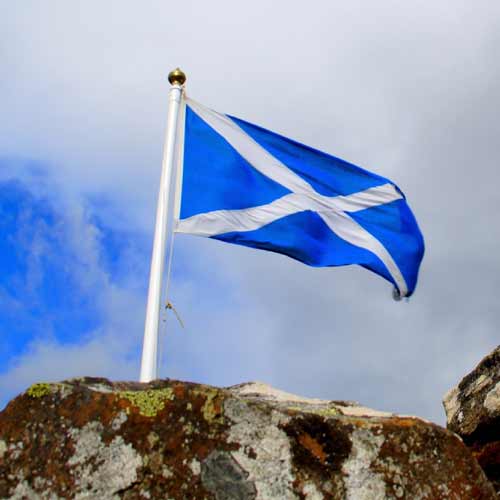 The legend of his Scottish connections begins with Regulus (St Rule), a Greek monk who, it is said, had a vision instructing him to transport the relics to the very ends of the earth. St Rule sailed from Patras, Greece in 345 on his quest, but his ship was shipwrecked off the coast of Scotland and he was forced to come ashore, with the relics, where the town of St Andrews stands now.

It's thought that St Andrew was first acclaimed as Scotland's patron saint in 832 when he appeared as a vision to the Scottish King the night before a crucial battle. Next day a saltire or X-shaped cross appeared in the sky which inspired the Scottish forces to victory.

From that day St Andrew was hailed as Scotland's patron saint and the Saltire, which represents the white of the clouds against a blue background, our national flag. The saltire is also known as the St Andrew Flag.

St Andrews, the Home of Golf

If one place encompasses the spirit and heritage of links golf, it's the Old Course St Andrews. To trace the story, we need to go back to 1123 when King David I designated the Links to be common ground, belonging to the citizens of St Andrews.

It is thought that a basic version of Golf was played on the links during the 15th Century and it became so widespread that in 1457 King James II banned the game because it was distracting the archery practice of his troops. A few years later the ban was repealed, and both King James III and IV took up the game, the latter buying the first set of clubs in 1502. 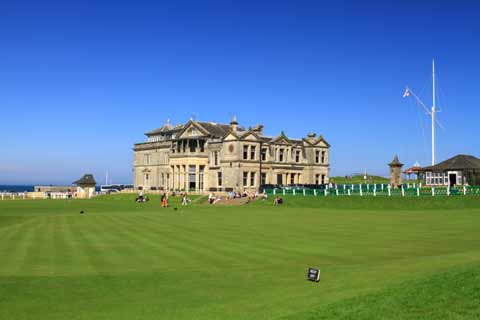 In 1746, the Society of St Andrews Golfers redesigned the links course from 22 holes to 18. This remains the standard round of Golf to this day.

In 1834 the Society of St Andrews Golfers changed its name to become the Royal and Ancient Golf Club of St Andrews. Under the patronage of King William IV, it started to formulate the rules of the game and oversee golf tournaments at other courses. The R&A continues to be the governing authority for the game in much of the World. 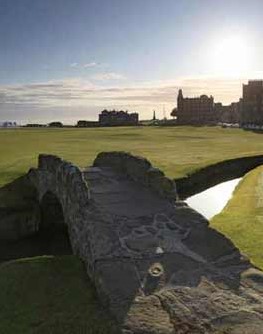 As well as the Old Course the St Andrews Links Trust owns and operates a further 6 golf courses. All are open to the public, and tee times can be booked in advance.

Due to demand tee times for play on the Old Course are drawn by ballot each day. Successful golfers can walk in the footsteps of golfing heroes such as Nick Faldo, Tiger Woods and Jack Nicklaus all of whom have won the Open Championship here.

Even if you don't have time for a round during your visit, you can still visit the Old Course. The view of the Swilcan Bridge on the 18th fairway looking towards the opulent Royal and Ancient Golf Clubhouse in the background makes for an envy-inducing post on your social media channels.

Things to do at St Andrews

Keeping with the golfing theme, you can discover 500 years of the game through a fascinating collection of artefacts and memorabilia. Explore the origins of the game; its Royal connections and the Great Open Champions during your tour of this fascinating visitor centre.

Enjoy panoramic views of the first tee and the fantastic West Sands from the rooftop café. Did we mention the delicious scones they serve here are worth the trip to St Andrews alone? 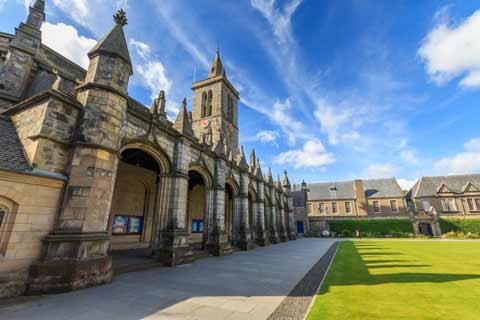 Founded in 1410 St Andrews University is Scotland's oldest, and in UK terms it is only preceded by Oxford and Cambridge.

St Salvator's Chapel is the centre point of the university and is a spectacular example of late gothic architecture. The chapel was founded in 1450 to promote education and missionary work.

On another part of the campus sits St Mary's College, where the School of Divinity is located. It overlooks a picturesque quadrangle where a thorn tree planted in 1563 by Mary, Queen of Scots thrives.

The University of St Andrews has a more recent Royal connection, of course. Prince William met his future wife, Catherine while studying Art History during the early 2000s. 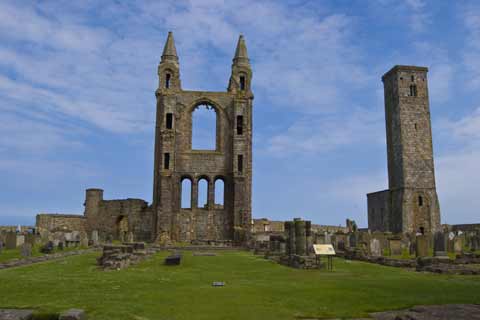 The ancient streets of St Andrews all unite at the cathedral which has a prominent position overlooking the harbour. Founded in 1160 it became the largest church in Scotland and was consecrated in the presence of no other than King Robert the Bruce in 1318.

The cathedral was the primary religious establishment in Scotland until the reformation of 1560 when it fell into disuse. St Rules Tower is still intact and was where St Andrews remains were kept during the construction of the cathedral. If you're feeling fit, why not climb the 156 sets to the top of the tower for incredible views over the town. 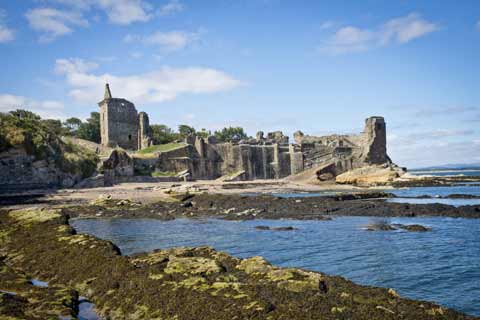 This ruined castle sits on a rocky cliff looking out to the North Sea. Constructed in the 12th Century as the stronghold of the archbishops of St Andrews, it has witnessed many violent episodes in its long history.

If you visit the castle lookout for the macabre bottle dungeon where prisoners were kept with death being their only possible release.

Explore the underground mine, dug during the brutal siege in 1546-7. 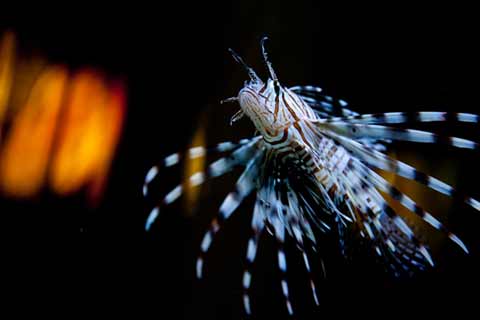 A short walk from the castle takes us to the fascinating aquarium where we can come face to face with a wide selection of wildlife from land and sea.

There are displays of British sharks, lionfish and deadly piranhas to keep young and old amused.

You can get face to face with the penguins at the daily feeding session. For fans of creepy-crawlies, there's a reptile and spider handling session while the loveable family of meerkats is sure to put a smile on your face.

Places to visit near to St Andrews 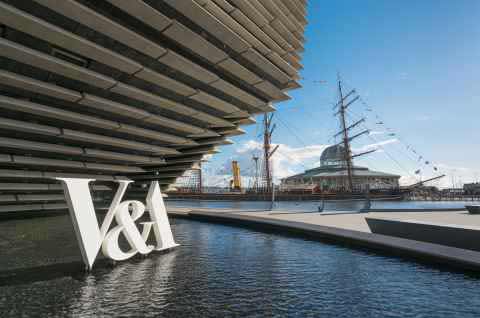 Overlooking the River Tay, this is the first V&A museum outside London and Scotland's first dedicated design gallery. Learn the story of design through permanent exhibits and visiting displays.

Also on the waterfront walk is the RRS Discovery, a tall ship that transported Captain Scott and his crew on a voyage of exploration to the frozen Antarctic. Tour the ship to discover the story behind one of the most epic journeys ever undertaken.

Several tours feature a stop in this delightful village, the favoured country retreat of the Stuart Kings and Queens. They built an impressive renaissance palace here, which features sumptuous rooms and beautiful gardens.

In more recent times Falkland has played the part of Inverness in the popular Outlander TV series. 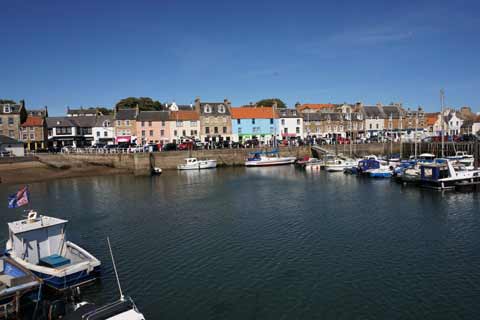 In the Scots language, Neuk means corner and this part of Fife is famous for the picturesque fishing villages that are dotted along the coast including Anstruther, Crail and St Monans.

If you get the chance, make a stop in one of these scenic villages to explore the old fisherman's cottages and merchants homes that sit overlooking the stone harbour.

Many of the villages are still home to a working fishing fleet, if you visit Anstruther, you can learn more about their fishing heritage at the Scottish Fisheries Museum. While you are in this quaint town, don't miss out on a local delicacy, freshly caught fish and chips from the famous chippie at the harbour.