Give your time in Scotland a real boost with this superb short tour to the North West Highlands. Immerse yourself in a landscape of towering mountains and deep lochs which provide a different vista at every turn. See the magnificent Glenfinnan Viaduct (Apr-Oct), star of the Harry Potter movies and get the chance to visit iconic Eilean Donan Castle too. There is so much to enjoy on this well planned tour.

Loch Ness - take a walk along the banks of this mysterious loch. Was that ripple just a wave or could it be…..?

We depart from Edinburgh and Glasgow then head to Stirling for our first visit of the day at the imposing Wallace Monument. This Victorian tribute is to Sir William Wallace, Scotland's great freedom fighter and the real "Braveheart”! The monument contains various exhibits, including his mighty 1.7 metre two-handed sword. If you are feeling fit why not climb the 246 steps to be rewarded with wonderful views towards Stirling Castle, the River Forth and the City of Stirling below.

Next we make our way towards Callander passing medieval Doune Castle, location of the popular movie, "Monty Python and the Holy Grail” and the TV series "Outlander”. As we travel through the Pass of Leny we cross from the Lowlands into the Highlands and make our way towards Rannoch Moor, a vast desert of peat bogs, heather, streams and little lochans. This unspoilt landscape extends over 50 square miles and is home to golden eagles and herds of red deer.

Soon we enter the majestic scenery of Glen Coe, probably the most celebrated glen in Scotland. As we descend the winding road into the heart of the glen we'll be told the sad tale of the infamous massacre that took place here in 1692. At least 40 members of the resident Macdonald clan were slain in their beds by troops of the Campbell Clan in an event that remains controversial to this very day. We'll make a stop so you can capture the beauty of Glen Coe for yourself.

During the months of April to October we’ll travel along the famous Road to the Isles to visit Glenfinnan on the scenic West Highland Railway where the impressive 21-arch viaduct will be familiar to Harry Potter fans as the route of the "Hogwarts Express”. Glenfinnan is also famous for it's connections to Bonnie Prince Charlie.  We'll see the moving Glenfinnan Monument which commemorates those who died during the 1745 Jacobite Up-rising.

A short drive will bring us to Fort William on the banks of Loch Linnhe, our home for tonight.

After breakfast we enter the Great Glen, an impressive valley that cuts 60 miles from the west coast to east. This geographical fault line is characterised by a chain of impressive lochs that form part of the Caledonian Canal. There is a photo stop at Loch Garry before we tour though Glen Shiel to reach the mountain range known as the "Five Sisters of Kintail”. They provide a impressive backdrop to our travels.

Picturesque Eilean Donan Castle which sits on its little island must be Scotland's most photographed castle! We will make a stop so you can visit the castle and enjoy the impressive views from the castle ramparts.

We make a stop for lunch in Fort Augustus, which sits on the banks of mysterious Loch Ness. Here there is time for stroll and maybe some monster spotting, if you are lucky!

After lunch we start our journey southwards stopping to view Ben Nevis, Britain's tallest mountain whose peak towers 1,344 metres above us.

The natural beauty of the Cairngorm National Park leads us to the Drumochter Pass and our descent through Glen Garry to reach the heather-clad hills of Perthshire.

There's an opportunity for a gentle stroll when we stop at The Hermitage, an impressive wooded gorge. A pleasant walk will reward us with views an 18th Century folly overlooking the dramatic Falls of Black Linn.

The last part of our journey together takes us through the ancient Kingdom of Fife and our crossing of the Forth Road Bridge to Edinburgh.

If you are returning to Glasgow you’ll be dropped at Edinburgh Waverley Railway Station for the return journey to Glasgow by train. There is a frequent service and the journey time is around 50 minutes. The train tickets are included in the tour fare.

Following the link above will give you more information on these attractions including current admission prices. At some locations a special discount is offered to tour participants, your driver/guide will give you more information if this applies. Credit/debit cards are not always accepted so you should plan to have sufficient cash with you should you wish to make any visits.

The group size is normally between 16 and 29 passengers.

Book Assured
Book by paying a 20% deposit. Make date changes or get a full refund with 8 days notice before travel. Click here for more information.

Flexi-tour
If booked in advance you can depart from Glasgow and return to Edinburgh. This facility is available at no extra charge! Please make your selection during the booking process 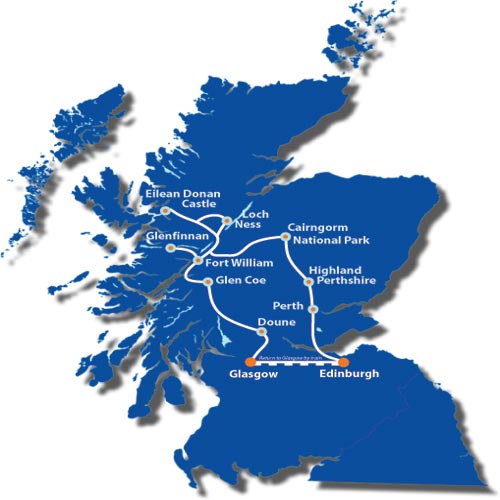 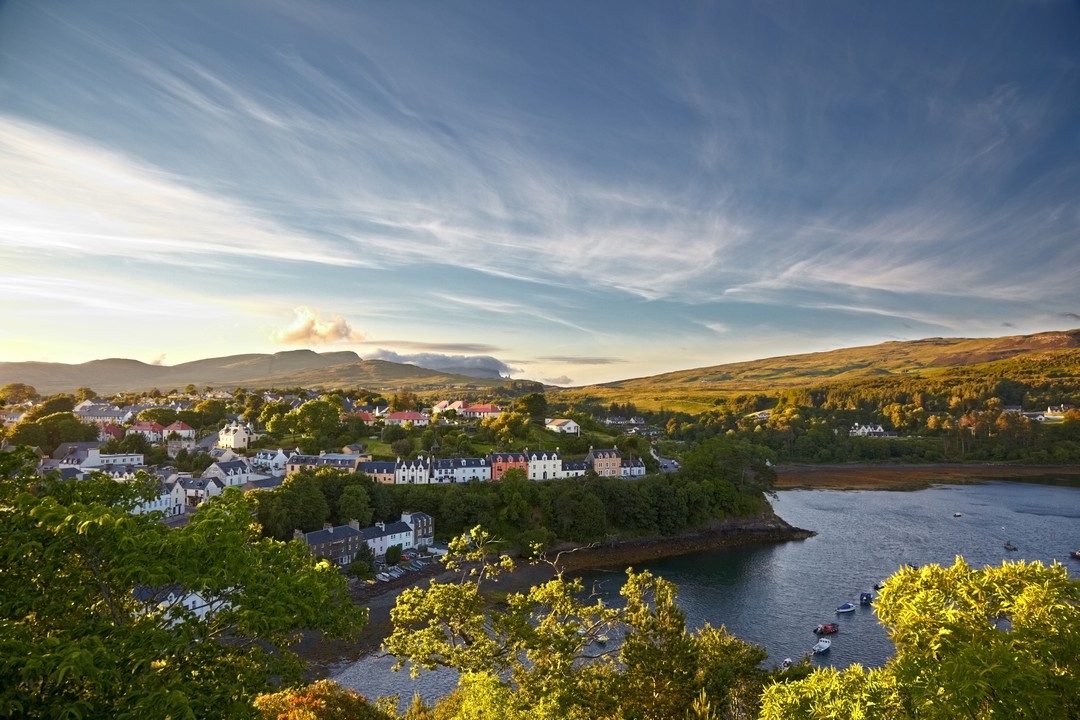 A Look at Skye

Find out more...
Skye and the Scottish Highlands

Find out more...
Glimpse of Scotland