What happened at the Glencoe Massacre

One dark, wintery night in February 1692, members of the resident MacDonald Clan were murdered, as they slept by troops of the Clan Campbell. Operating under orders from the Government, thirty-eight men, women and children all perished in an episode of Scottish history that remains controversial to this very day.

Although Glen Coe has been awarded the nickname “The Glen of Weeping”, it is one of Scotland’s most scenic places. This deep valley is surrounded by several Munro mountains (each peak is over 3,000 ft/914 m high), including iconic Buachaille Etive Mor.

Discover more about the beauty of Glen Coe and the tragedy of the Glencoe Massacre of 1692 with the experts at Scottish Tours. 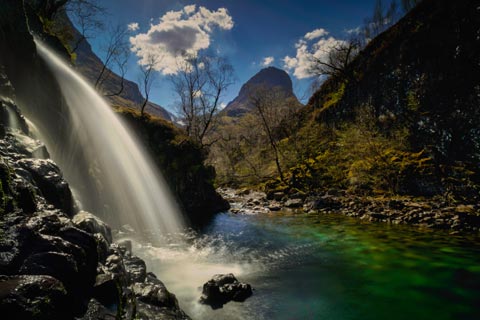 Where is Glencoe Scotland?

Glen Coe is a dramatic steep-sided valley on Scotland’s west coast not far from Fort William, Scotland’s outdoor capital. It runs from Rannoch Moor through spectacular mountain scenery to Loch Leven in Argyll.

Most travellers agree that the most impressive way to enter the glen is from the south along the A82 route. After driving through bleak and desolate Rannoch Moor, the road descends into the Pass of Glen Coe.

Travel alongside the cascading waters of the River Coe as stunning views of Beinn Fhada, Gearr Aonach and Aonach Dubh, known collectively as the Three Sisters Mountain Range, are revealed. 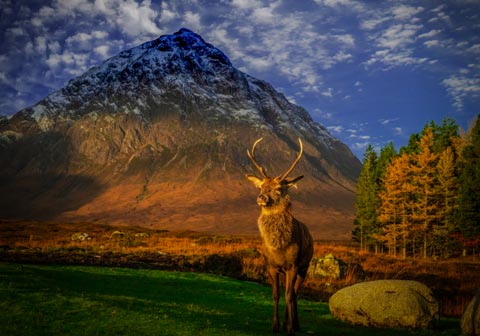 It’s thought that Glen Coe was created as the result of powerful volcanic eruptions around 400 Million years ago. Later, glacial movements during the Ice Age formed the breathtaking landscape that we see today.

Local folklore has it that the famous Celtic hero, Fingal, lived in the mountains of Glen Coe and his poet son, Ossian, was inspired by its beauty.

It’s said Ossian sought solace here during the winter months when he lived in a cave high up on the side of Aonach Dubh, accessible only after a strenuous climb known as Ossian’s Ladder.

The residents of Glencoe were members of the powerful MacDonald Clan who had lived in Glen Coe since the 1300s, maybe even earlier.

Glen Coe is a harsh place to live, with little fertile soil to grow crops or land to graze cattle. As a result, the MacIains developed a reputation as raiders and pillagers. They were very successful at cattle rustling and hid their ill-gotten gains in a remote glen with steep sides known as the Lost Valley.

It will be no surprise to learn that The MacDonalds had a poor relationship with their neighbours, who were members of the Clan Campbell. 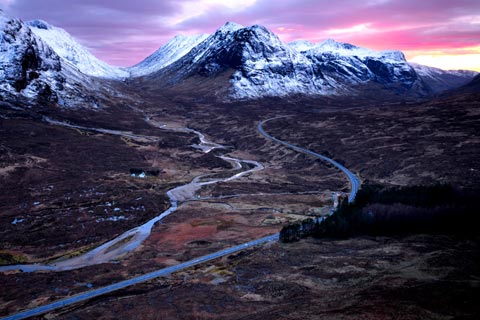 In 1689 the Protestant King William of Orange and his wife Mary were invited to be joint rulers by the British Parliament. This was in preference to King James II (James VII of Scotland), a Catholic. This time was known as the Glorious Revolution, and you can learn more about it in our Bonnie Prince Charlie and the Jacobites blog.

The Clan Chief at this time was Alasdair MacIain, a large man with flowing white hair and beard. He was well-respected by his clan folk and much feared by his enemies.

Like many of the Highland Clan Chiefs, MacIain had pledged to support the deposed King James. So, when he received an order instructing them to sign an oath of allegiance to King William by 1 January 1692, it caused great concern as anyone not complying with the order would be punished severely, as traitors.

It wasn’t until 28 December that a messenger arrived telling MacIain that James had released him from his pledge. Leaving Glen Coe behind, the Clan Chief headed out into a winter storm bound for Fort William to take his oath of allegiance.

When he arrived, he was told there was no Sheriff there who could take the oath, and he was directed to proceed to Inveraray, 60 miles away. MacIain arrived after the deadline but was allowed to take the oath on 6 January 1692. He then returned to Glen Coe, thinking that he had done his best and all was well.

In Edinburgh, Lord John Dalrymple was the Secretary of State. He disliked highlanders and saw them as a hindrance to the advancement of Scotland. He particularly despised the MacDonalds of Glen Coe due to their unlawful behaviour.

Together with his law officers, Dalrymple refused to accept MacIain’s oath, and the fate of the MacDonalds of Glen Coe was sealed.

At the end of January, around 120 soldiers of the Earl of Argyll’s regiment led by Captain Robert Campbell of Glenlyon arrived in Glen Coe. As was the practice, they were provided with food and lodgings by the resident MacDonalds. For nearly two weeks, they lived together, neither party knowing what was about to happen. 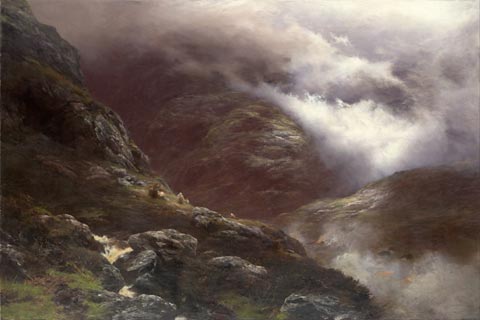 At 5am on the morning of 13 February, the signal was given to “put all to the sword under seventy”. Legend has it the orders were delivered from a high point known as Signal Rock.

Among the first to die was Maclain, together with 37 other members of the MacDonald clan. Others escaped but perished in the severe weather, including MacIain’s elderly wife.

It’s considered most likely that some soldiers, disgusted by the orders they had been given, tried to warn their hosts of what was about to happen and give them time to escape.

MacIain was buried on the tiny island of Eilean Munde on Loch Leven, a traditional resting place for Clan Chiefs and their families. 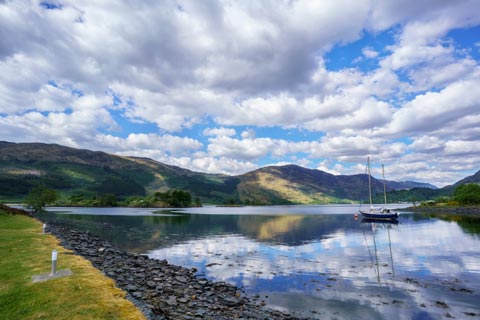 After the story of the massacre came out, there was a public enquiry. King William was cleared of any blame, and Lord Dalrymple escaped any consequences for his actions.

Much of the responsibility for the incident was directed towards the Clan Campbell. However, contemporary reports indicated that only 12 or so of the troops involved were members of the Campbell Clan.

Often, the Massacre of Glen Coe is presented as a direct conflict between the Campbell and MacDonald Clans. As you can see, the truth is far more complex and involved senior members of the Scottish establishment.

The National Trust for Scotland has cared for Glen Coe since 1935 when it bought 12,800 acres of land to prevent any commercial development. 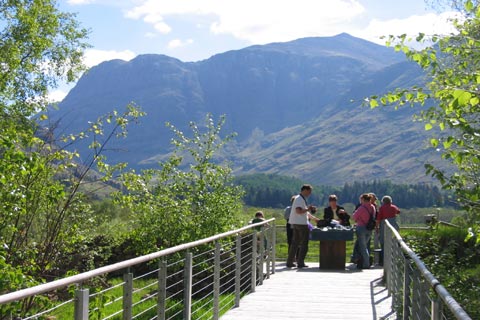 Since then, the trust has steadily extended its ownership of the glen, which now includes the upper sections of Glen Etive.

The National Trust for Scotland is the nation’s primary conservancy charity that looks after around 130 properties and 180,000 acres. Amongst the many treasures owned by the Trust are Robert Burns birthplace, Glenfinnan and Culloden.

An eco-friendly visitor centre was established at the western edge of the glen, which provides panoramic views plus information on walks, weather and the seasonal wildlife that visit the glen.

This attractive village was thought to have been a MacDonald settlement at the time of the massacre. It contains a selection of shops, lodgings and campsites serving visitors to the area. 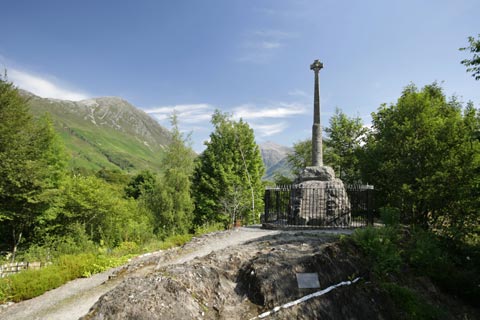 The excellent Glencoe Folk Museum is housed in two traditional thatched cottages that can be found on the village’s main street. The museum tells the story of Glencoe and the people that lived here.

Amongst the fascinating displays are Jacobite relics and weapons found in the thatched roofs of local homes. They had been hidden away after the massacre and only recently rediscovered.

Many tourists choose to break their journey to visit the simple monument which commemorates the massacre. It has an attractive location overlooking the River Coe as it flows towards Loch Leven.

With such an impressive backdrop, it’s no wonder that Glen Coe has appeared in many movies. Amongst the blockbusters to have been filmed in the area are Rob Roy, Skyfall, The 39 Steps and Highlander.

The opening titles for the popular Outlander TV series feature a sequence filmed amongst the rugged beauty of Glen Coe.

It’s easy to discover the beauty of Glen Coe for yourself with Scottish Tours.

One-day tours that include time in “The Glen” operate from Edinburgh, Glasgow and Inverness. It’s also a popular highlight in many multi-day tours too.