Top things to do in Dundee

Dundee, the 4th largest city in Scotland, is a modern, forward-thinking city with a wealth of history. Sitting on the banks of the Firth of Tay, Dundee is in the eastern central lowlands of Scotland and was formerly part of the county of Angus.

Known as Scotland’s sunniest city in terms of average hours of sunshine, it was voted the best place to live in Scotland, the ‘coolest little city in Britain’ according to GQ in 2015, and made it on to The Wall Street Journal’s ‘Worldwide Hot Destinations’ list in 2018. In 2014 The United Nations honoured Dundee as the United Kingdom’s first UNESCO City of Design.

Dundee clearly has a lot going for it! We’ll take a closer look and find out some of the top things to see and do in Dundee. 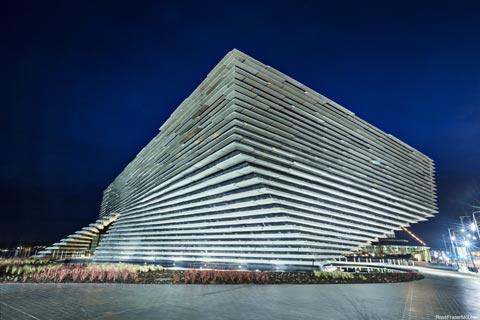 The V & A Museum of Design   was opened on 15th September 2018. Scotland’s first design museum, it was named as one of the best places to visit in the world by TIME Magazine in 2019

The building has several exhibition galleries and also houses the restored Oak Room designed by Charles Rennie Mackintosh. This exquisite design was originally used as one of Catherine Cranston’s famous Glasgow tearooms and was restored from over 700 original parts stored by Glasgow City Council for over 5 decades. The programme consists of temporary and permanent exhibitions, and the welcoming, family-friendly space also has a shop and cafe/restaurant.

Also very much worth a visit is the DCA - Dundee Contemporary Arts Centre.   The venue has 2 art galleries, which have hosted shows by significant artists, and a 2 screen cinema, printmakers’ studio and workshop. The complex contains a popular café/bar and shop too.

Another attraction for art lovers is The McManus Museum and Art Gallery, with 8 galleries over 2 floors.

Dundee is a busy student city, boasting 2 top-class universities. The University of Dundee, incorporating Duncan of Jordanstone College of Art and Design, is one of the most well-respected art schools in the UK. Former students include award-winning film director David Mackenzie, and Susan Phillipz, winner of the Turner prize in 2010. 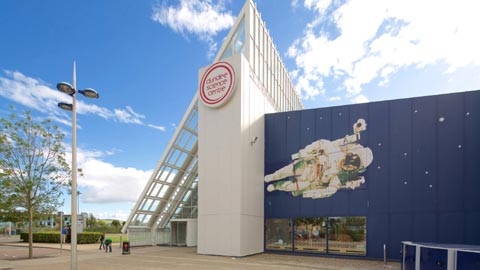 Abertay University, which is renowned for its courses in computing and creative technology, particularly video games design, boasts alumni such as David Jones.

Children and adults will enjoy a visit to Dundee Science Centre, where there are interactive exhibitions and displays, a shop and a tasty new cafe.

Discovery Point is an award-winning museum and visitor attraction, with the Royal Research Ship Discovery as its centrepiece, telling the story of the Dundee-built ship that Captain Robert Falcon Scott (Scott of the Antarctic) sailed on the 1901- 1904 British National Antarctic Expedition. 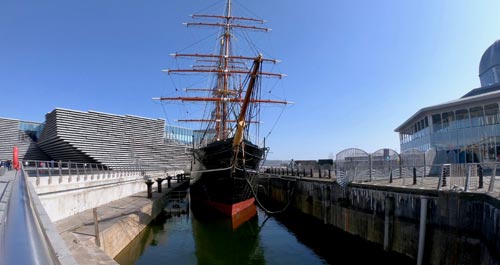 The information gained on the expedition added to a significant body of work in our knowledge of the Antarctic continent.

Discovery returned to Dundee in 1986.  The museum now contains personal items from the ship’s crew and information on her scientific activities and further expeditions. The museum also holds other pieces from Scott’s subsequent Terra Nova expedition and Shackleton’s Endurance expedition. 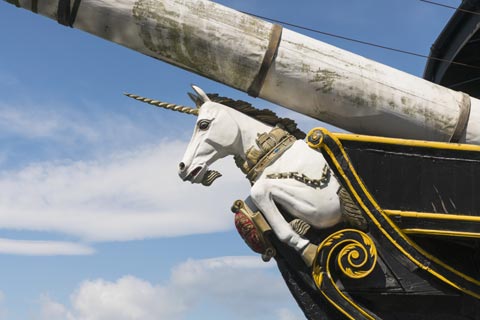 Moored at Victoria Dock on the waterfront and linked to RRS Discovery by a riverfront walkway, HMS Unicorn is a historic naval ship claiming to be ‘the most original old ship in the world’.

The ship is now a fascinating visitor attraction and museum, which tells her near 200-year history from the Georgian Navy of 1824 to her service in World War 2. 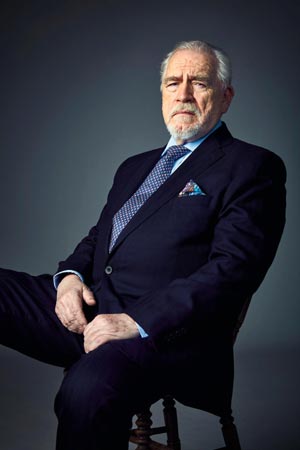 The renowned film, television and theatre actor Brian Cox was born in Dundee. He played the original Hannibal Lecter in the movie “Manhunter” but is better known today as Logan Roy in HBO’s award-winning show “Succession”.

In the show, Logan (like Brian) is a Dundee native. The cast and crew filmed an episode in the city, with some scenes shot in the V & A.

James and Janet Keillor’s Marmalade is generally believed to have been the first commercial brand manufactured in the UK. They didn’t invent marmalade, but developed it into the spreadable conserve that we now associate with our toast.

Marmalade became a famed Dundee export after the Keillor family industrialised the production process during the 19th century.

Surprisingly, former Prime Minister Winston Churchill was the Liberal Member of Parliament for Dundee from 1908 until 1922, after losing his Manchester seat.

The Tay and the Tay Bridge 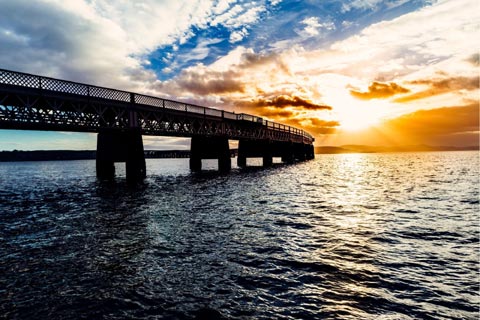 The River Tay is the longest river in Scotland, starting from the slopes of Ben Lui in the west Highlands of Scotland and travelling eastwards across the country to the Firth of Tay, south of Dundee via Perth.

The current Tay Rail Bridge was built to replace the first, which collapsed in the 1879 Tay Bridge Disaster, killing 75 people after a terribly violent storm. At the time, it was the longest railway bridge in the world.

The current bridge transports the railway across the Firth of Tay from Dundee to Wormit in Fife.

It may not be as magnificent or famous as the UNESCO World Heritage Forth Railway Bridge over the Firth of Forth. Still, it did inspire Dundee resident and ‘Worst Poet in the English Language, William Topaz McGonagall, to compose this masterpiece in its honour: With your strong brick piers and buttresses in so grand array,

And your thirteen central girders, which seem to my eye

Towards the end of the Victorian era, Dundee was famous for its three Js - Jute, Jam and Journalism. 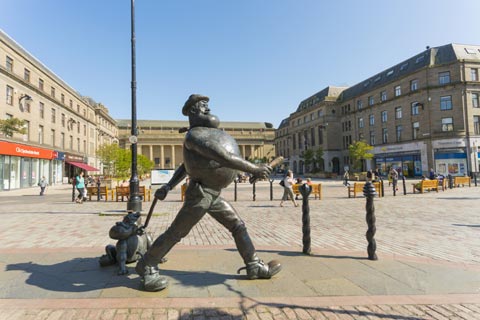 Dundee’s rapid expansion during the Industrial Revolution can be attributed to the importance of textiles, particularly the Jute industry. Whale oil was needed for processing the jute, which supported a thriving whaling industry, closely linked to Dundee’s importance in maritime and shipbuilding industries.

The jam in the middle of the 3 Js refers to marmalade - Dundee became famous for marmalade after the Keillors began producing it in industrial quantities in the late 1800s.

And the Journalism is on account of the publishing company that became known as DC Thompson in 1905 - home of The Beano, Dandy, Jackie and Bunty comics.

In addition, regular flights go to and from London.

Places to visit outside Dundee

You’re spoilt for choice if you fancy a day trip or more extended stay with Dundee as your base! 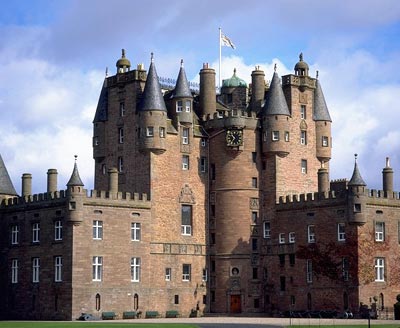 Childhood home of the late Queen Mother, and the birthplace of the Queen’s sister Princess Margaret.  Turreted and chateau-like Glamis Castle is one of the most beautiful in Scotland and the inspiration for the castle in Shakespeare’s Macbeth.

Public bus services depart from the Seagate bus station in Dundee to Forfar, where there is a connecting bus service to Glamis.

This region of natural beauty is a drive of approximately 1 hour and 15 minutes from Dundee via the A9.

The charming seaside suburb of Broughty Ferry is only a short bus or train ride from Dundee city centre. Visit historic Broughty Castle, which dates to 1496, and its fascinating museum. 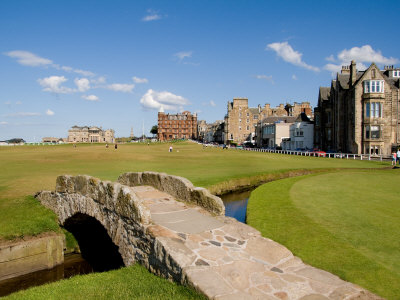 Of course, if golf is your thing, you won’t want to miss the opportunity of visiting the medieval town of St Andrews in Fife - the home of golf!

Read more about St Andrews with our informative blog.

From St Andrews, why not continue your journey and visit the beautiful fishing villages of the East Neuk of Fife. These charming villages are a must-see and feature in the Fife Tourist Route, one of the best scenic drives in Scotland.

Regular bus and train services link the town of Carnoustie with Dundee. Carnoustie’s historic Championship Golf Course has hosted the British Open, the oldest golf tournament in the world, 8 times.

This fascinating wildlife centre is part of Camperdown Country Park, just outside Dundee, and has animals such as lemurs, marmosets, donkeys and a European brown bear. The park is easily accessible by bus.

It’s Time to Book Your Scottish Adventure with Scottish Tours!

At Scottish Tours, we make it easy for you to explore the very best that Scotland has to offer.

Whether you want to explore the vibrant and picturesque Scottish Highlands or immerse yourself in one of our great cities, our travel experts will help you plan your perfect escape.