The architecture and art of Charles Rennie Mackintosh and his wife Margaret MacDonald Mackintosh are one of the most recognisable characteristics of the great city of Glasgow. Their designs for buildings, furniture and interiors are known and loved all over the world.

Think of Glasgow and some of the first things to come to mind are possibly Mackintosh’s distinctive rose motifs on stained glass windows, and the sinuous elongated art-nouveau furniture.

Mackintosh merchandise displaying the trademark floral tendrils and characteristic bold, elongated font fill museum and art gallery gift shops throughout the world, but the designs that now adorn chintzy mugs, jewellery and mirrors were once considered radical and provocative. Sadly he gained more recognition and acclaim in Europe than he did at home. 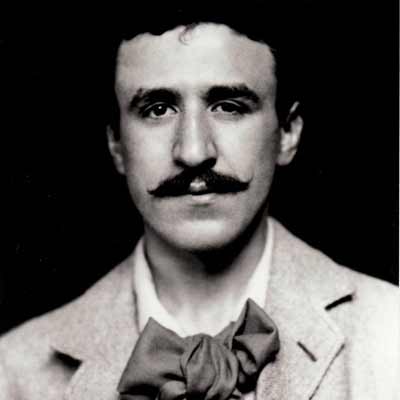 Who is Charles Rennie Macintosh?

An artist, architect and designer, Mackintosh was born in Glasgow in 1868. He studied at Glasgow School of Art between 1883 (while a young apprentice) until 1894. This is where he met his wife and collaborator, Margaret MacDonald.

Margaret was an important artist in her own right, but many people only know of Charles. It’s crucial to emphasise how much she contributed and helped him with his work.

She was born near Wolverhampton in 1864.

Together with her sister, Frances, she began her studies at the Glasgow School of Art in 1890. She was a painter and designer, and her work was very highly regarded. 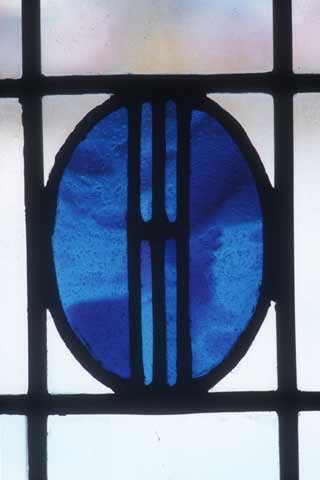 In the period around the turn of the 20th century, Glasgow was a place of great innovation and originality in artistic production, inspiring the architect and art historian Hermann Muthesius to state in 1902 that ‘Those who want to see art should bypass London and go straight to Glasgow.’

The economy was on the up, and design was flourishing in Glasgow. A particular manner of art emerged which became known as The Glasgow Style.

Notable groups of artists at the time included The Four: Charles Rennie Mackintosh, Margaret MacDonald Mackintosh, Margaret’s sister Frances MacDonald, and Herbert MacNair, Frances’ husband. They were known as ‘The Spook School’, on account of the peculiar stylisations of human and plant forms in their work, featuring limbs, hair and flowing tendrils.

Other groups were The Glasgow Boys (a diverse group of male artists who trained in or had strong ties to Glasgow), and The Glasgow Girls (Margaret MacDonald Mackintosh and Frances MacDonald amongst others). 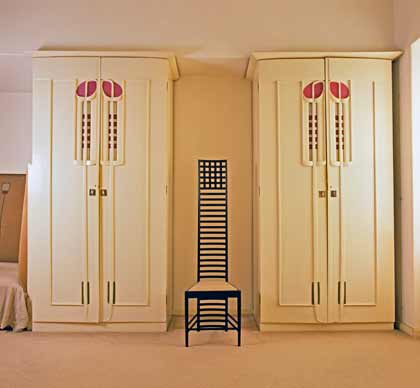 Charles Rennie Mackintosh was very interested in historic Scottish and English architecture, but he adapted and transformed the traditional features into his own style.

He was a great admirer of the restraint and simplicity of Japanese design (Japonisme) at the time he was beginning to work.

Still, he is also very obviously at the forefront of European modernism and displays the prevailing characteristics of symbolism and art-nouveau in his design.

Let us take a look at some of the most well known of his Glasgow buildings.

The Lighthouse Building, or the Glasgow Herald Building 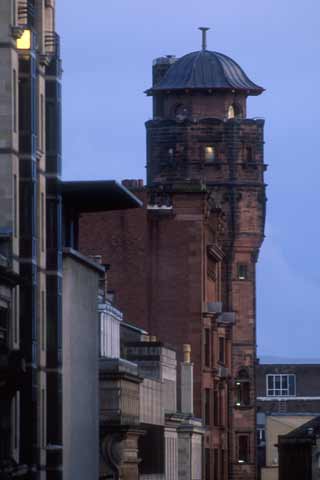 This was the first significant project that Mackintosh was involved in, started while he was employed by the architecture firm John Honeyman and Keppie, in 1899. It was usual for buildings to be designed collaboratively, with the architects of the firm having responsibility for different components of the interiors and exterior.

Mackintosh was responsible for the Mitchell Street extension and was apparently disgruntled that his name was not attached to the project, as he was not yet a partner in the firm at the time. It was only later in his career that Mackintosh was given sole responsibility for designing buildings at Honeyman and Keppie.

The Lighthouse Building is now the location of Scotland’s Centre for Design and Architecture and is a visitor centre, exhibition space and events venue. Don’t miss the permanent ‘Mackintosh Interpretation Centre’ situated on Level 3 of the building.

The Glasgow School of Art 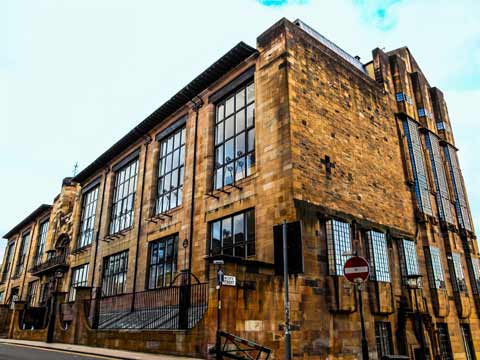 The building that bears his name, The Charles Rennie Mackintosh Building of the Glasgow School of Art, is undoubtedly his most famous and beloved creation.

Construction of the building began in 1897, after Mackintosh won a design competition, and took about 10 years to complete in its various phases

Tragically, after two fires ravaged the building, one in 2014 and a second in 2018, the building is all but entirely gone. The beautiful Mackintosh library was completely destroyed, along with most of the entire interior. All that remains is a structurally unsound shell.

It’s dearly hoped that the Mackintosh building can be recreated from the original plans, but it remains to be seen if that will be possible. 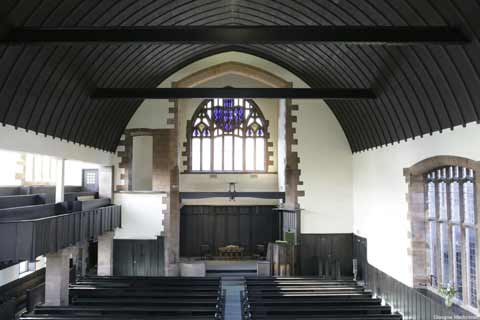 The Mackintosh Church at Queens Cross, in the north-west of Glasgow, is one of his most intact original buildings. Designed in 1897, it was completed in September 1899 and is the only church to have been built from Mackintosh’s plans. It’s now the international headquarters of the Charles Rennie Mackintosh Society.

The church is unusual amongst Glasgow’s churches because it doesn’t have a tall spire. Instead, it has been described as resembling a squat Norman castle.

You shouldn’t miss the opportunity to see the interior of the church and be dazzled by the magnificent blue stained glass window, the beautiful carvings on the wood and stonework, and the exceptional barrel-vaulted roof.

House for an Art Lover 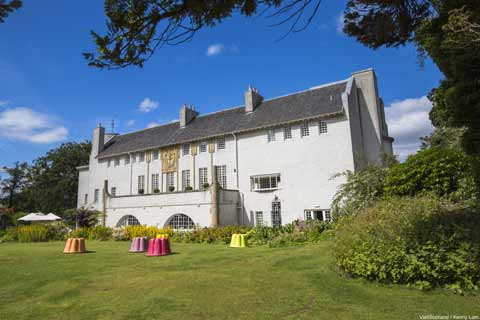 The competition designs for House for an Art Lover were prepared by Mackintosh in 1901. His remit was: ‘to design a house in a thoroughly modern style, where one can be lavishly entertained.’

The building was eventually constructed between 1989 and 1996, in the grounds of Bellahouston Park on the south side of Glasgow.

Inside the House, visitors can compare Mackintosh’s original drawings against the completed rooms. The Art Lover’s Cafe and Shop is a peaceful place to enjoy this delightful venue, and a programme of regular art exhibitions is displayed in the restaurant.

Mackintosh at the Willow - The Willow Tea Rooms 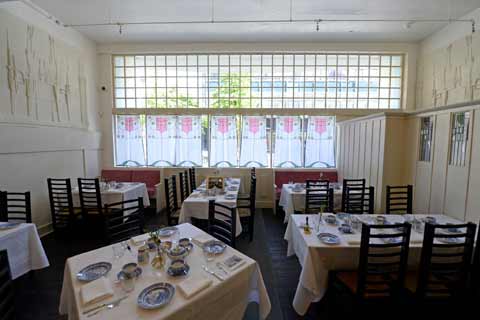 Mackintosh designed a series of tea rooms in Glasgow for the entrepreneur and businesswoman Miss Catherine (Kate) Cranston.

The only surviving tea rooms, in Sauchiehall Street, first opened in 1903, and are in architectural terms an example of Gesamtkunstwerk – a total work of art.

Mackintosh designed everything down to the smallest detail, including interiors, cutlery and waitresses’ uniforms, and his wife Margaret provided the design for the decorative wall panelling.

The Willow Tea Rooms today have been faithfully renovated and restored according to Charles and Margaret Mackintosh’s original designs. They should be on the must-do list of any visit to Glasgow. 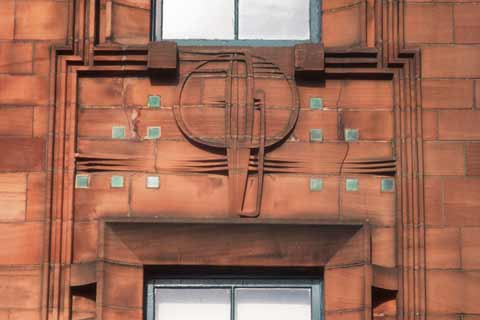 This magnificent, elaborate, turreted castle-like former school building in Glasgow’s Tradeston area is a mature example of Mackintosh’s understanding of the interplay between light and space.

Mackintosh designed the school for the School Board of Glasgow between 1903 and 1906. It opened as a working school in August of 1906, and it’s last pupils left the building in 1979.

The building is now a fascinating museum, with period classrooms and interactive exhibitions displaying the history of Scottish education and the local area.

Outside Glasgow - The Hill House, Helensburgh 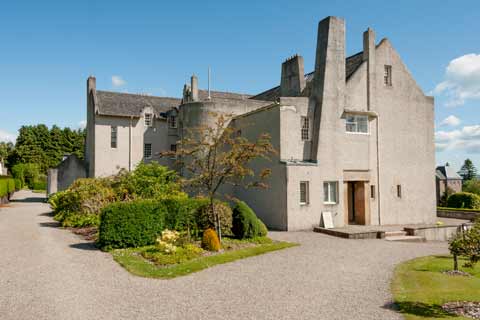 Mackintosh was commissioned to design this large, detached family house in the pretty town of Helensburgh, overlooking the banks of the Firth of Clyde for the Glasgow publisher Walter W. Blackie.

It was his most significant domestic work and has achieved international acclaim as one of the best houses of the 20th century.

The building is currently operated as a museum by the National Trust for Scotland.

The famous Mackintosh chairs have appeared in several movies and TV shows, including Blade Runner, Doctor Who and Inception.

In her 1989 video for Express Yourself, Madonna can be seen dancing in front of one of the slender high-backed chairs, while later in the video she is seen crawling beneath a table surrounded with more of the Mackintosh style chairs.

If you’re planning a trip to Scotland, it’s easy to include a visit to the vibrant city of Glasgow in your travels. Let us show you the highlights of Glasgow, where evidence of Charles Rennie Mackintosh’s vision is all around.