Take the off-ramp from the motorway and head for the road less travelled to discover the best of Scotland's scenic beauty. Meander through remote glens then stop to take in the loch-side vistas. Enjoy a tasty lunch in a local pub before exploring an ancient castle to learn its story and the history it has witnessed. There is so much of Scotland just waiting to be discovered on your next road trip.

Of course, you can hire a car and, with the Sat Nav programmed, head out on your own. But, wouldn't it be better to let someone else do the driving? In the company of a knowledgeable driver/guide, you'll discover so much more than the guidebooks will ever tell you.

Let the professionals worry about the driving and let them entertain you with tales of Scotland's colourful past as you gaze out of the large panoramic windows at the beautiful scenery that surrounds you.

Here is our guide to some of the best drives in Scotland so, whether you plan to do your own thing or join one of our expertly guided tours, take your seats and let the fun commence.

From the bonnie, bonnie banks of Loch Lomond head through the scenic beauty of the Western Highlands to reach Inveraray, famous for its fairytale castle. Explore the ancient birthplace of the Scottish nation at Kilmartin Glen then enjoy stunning coastal scenery all the way to Oban. 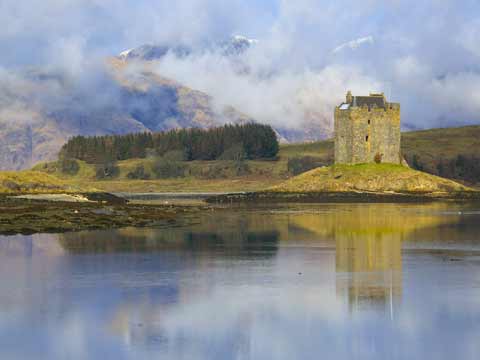 The town is known as the seafood capital of Scotland, so head to the pier, where you can sample a delicious al-fresco lunch of freshly caught deliciousness. Suitably nourished climb Battery Hill to enjoy the views from McCaig's Tower over Oban Bay.

Follow the West Coast route through Benderloch and Appin to reach beautiful Castle Stalker, which sits on a little islet at the mouth of Loch Laich. It's not open to the public, but makes a wonderful Instagram post.

Drive along the banks of Loch Leven to discover why beautiful Glen Coe is known as the "Glen of Weeping" before arriving in Fort William. 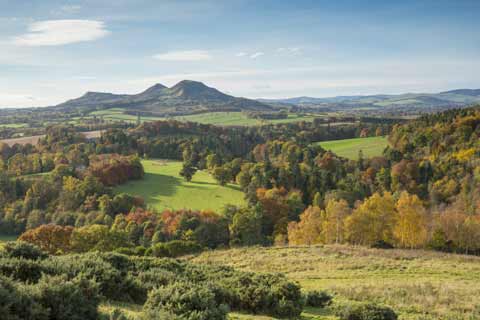 Travel through the rolling hills of the Scottish Borders to discover grand houses, ancient abbeys and attractive towns with a long history of textile making. Hear colourful stories of the lawless Border Reivers, who raided both sides of the Scottish and English Border, then took their spoils to a place called the Devil's Beef Tub!

The Eildon Hills, just south of Melrose, so inspired Sir Walter Scott, the famous author and patriot that he built his beloved home, Abbotsford in their shadow.

In contrast, a little further north, discover what life was like for the miners who worked the Lady Victoria Colliery at the National Mining Museum Scotland.

Take a break from travelling to discover the mysterious atmosphere of Rosslyn Chapel, famed for its elaborate stone carvings. It played a starring role in Dan Brown's bestseller "The Da Vinci Code". Afterwards stretch your legs in leafy Roslin Glen, before making the final part of the journey in Edinburgh.

Start with a visit to Scone Palace, one of Scotland's great houses and home to the Earls of Mansfield. Scone was the ancient crowning place of the Scottish Kings. The famous Coronation Stone of Destiny (or Stone of Scone) can be found on display in Edinburgh Castle alongside the Scottish Crown Jewels. 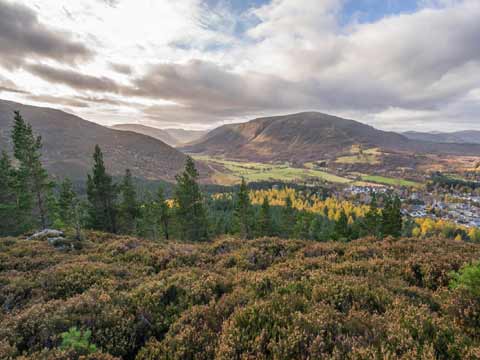 The drive continues through Glenshee, a popular winter sports venue, to reach Braemar, famous for its Highland Gathering which is attended by members of the Royal Family. Queen Victoria bought the Balmoral Estate in 1852, and since then the Royal Family have vacationed here each year giving the area the title Royal Deeside.

This part of the route is included in the famous "Castle Trail", and along the way, you can visit beautiful Crathes Castle and Gardens or Drum Castle, which has one of the finest medieval banqueting halls in Scotland.

Aberdeen is the end of the road. Famed for its granite buildings, this pleasant city boasts beautiful parks and an attractive seaside setting. 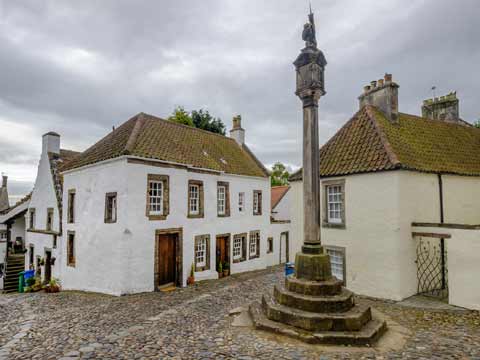 Cross the River Forth at Kincardine to reach Culross, a delightful 16th and 17th Century town that has found a starring role in hit TV series "Outlander".

The area around the Mercat Cross is the setting for the fictional village of "Cranesmuir". Behind the impressive mustard-coloured Palace are Claire's herb gardens at Castle Leoch.

Dunfermline was once the Capital of Scotland. Here we can find a Royal Palace and a 12th Century Abbey where the great Scottish hero, Robert the Bruce, is buried. 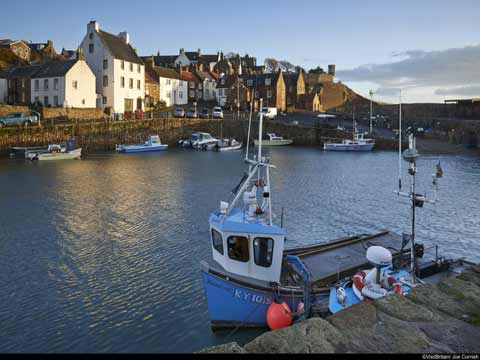 The next part of the journey takes us to the East Neuk of Fife, which is sprinkled with attractive fishing villages including Anstruther, Crail and Pittenweem. Without a doubt, the highlight of this drive is St Andrews, the ancient University town, which is famed World-wide as the home of Golf.

Journeys end is in the town of Newport on Tay, which sits looking towards Dundee on the opposite banks of the silvery River Tay.

From central Edinburgh head to pretty South Queensferry to take in the vista of the three bridges that span the Forth Estuary. The oldest is the mighty Forth Rail Bridge, over a century old and designated a UNESCO World Heritage Site.

The design of medieval Blackness Castle is decidedly naval which is why it's known as the "ship that never sailed". It's another filming location popular on Outlander Tours as it is the location for the Fort William headquarters of Black Jack Randall.

Linlithgow Palace appeared in Outlander too, as grim Wentworth Prison. In real-life, this 15th Century Palace has a beautiful position overlooking a loch. It was a favoured residence of the Stewart Kings and Queens and was the birthplace of Mary, Queen of Scots. 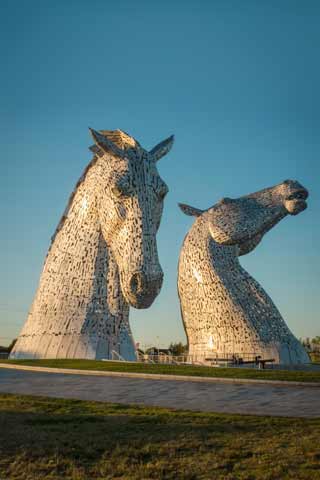 Stop-off to explore The Kelpies, two massive horse-head statues that celebrate the role that heavy-horses played in Scottish industry. Nearby is the Falkirk Wheel, the World's only rotating boat lift. This feat of modern engineering connects the Forth and Clyde Canal with the Union Canal allowing boats to cross Scotland, coast to coast.

The City of Stirling sits at the heart of Scotland. It played an important role in Scotland's Wars of Independence. On the outskirts sits the site of the Battle of Bannockburn which took place in 1314. The Scots won a famous victory against the army of King Edward II of England, you can discover more at the award-winning visitor centre.

Overlooking the Old Town of Stirling sits the mighty Castle. Inside you can explore the opulent Royal Palace, Chapel Royal and the Great Hall. Built for King James IV, it's the largest to be found anywhere in Scotland and was the scene of magnificent banquets and pageants. 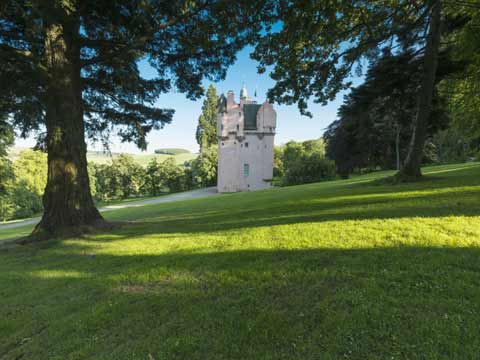 Whisky, castles and glorious scenery are the highlights of this journey between Scotland's two northerly cities. Leaving the granite city of Aberdeen behind head for Alford to visit the Grampian Transport Museum. The eclectic collection of road vehicles tells the story of travel and transport in the North East of Scotland.

A short drive from Alford is elegant Craigievar Castle,  which is the very epitome of how you'd want a Scottish castle to look like. So much so it's said was the inspiration for Walt Disney's Cinderella's Castle.

Next, the journey enters the Cairngorms National Park to reach lonely Corgarff Castle, then the road climbs to over 2,000 feet (610 m) over the eastern Cairngorm Mountains. This mountain route is Scotland's second-highest road and, in the main, it follows the old military road that was constructed, using manual labour, after the 1745 Jacobite Rebellion. 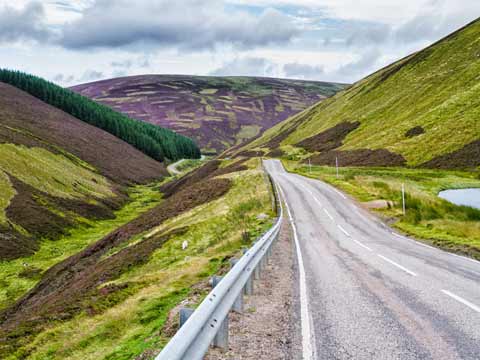 Not far from Tomintoul, in a lonely glen, sits Glenlivet Distillery. This remote location made an ideal location for illicit whisky-making. In 1824 distiller George Smith decided to go legit so got the first licence in the area and Glenlivet has never looked back since. You can visit the distillery to discover the story of George and his whisky then get a behind the scenes tour to see the production process.

The last part of the route takes in Grantown on Spey and Cawdor Castle, home to the Thanes of Cawdor for over 600 years. A short drive away is Culloden Moor, the site of the Battle of Culloden in 1746 between the Jacobite Army of Bonnie Prince Charlie and the Government Forces. The moor has now been restored to the way it would have looked that fateful day and the visitor centre tells the story through immersive audio-visual displays.

It's a short distance into the heart of Inverness, the Capital of the Highlands.

These scenic drives are part of a network of 12 National Tourist Routes that criss-cross the country showcasing Scotland's natural beauty and our very best attractions. You can get more information about these tour routes from the VisitScotland website. 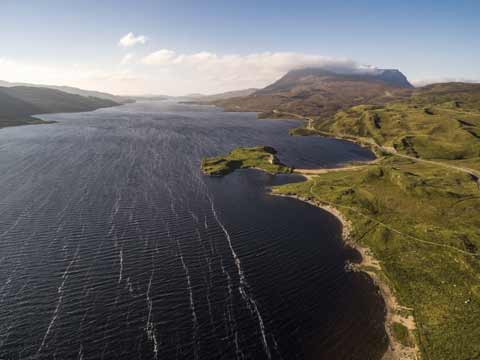 Without a doubt, the most successful tourist route is the North Coast 500, it's considered the ultimate road trip. 500 miles (805 km) from start to finish this route offers some of the finest coastal scenery in Europe.

It appears on so many people's bucket list that we've created a North Coast 500 blog to tell you much more about it.

If we've whetted your appetite, then why not consider, our new Scotland's Northern Edge Tour, it's the perfect way to experience the North Coast 500 in 5 days.

Take to the road to experience these fantastic drives for yourself. Upgrade your Scotland holiday by taking an expertly researched tour with Scottish Tours. Let us take care of the details, and the driving, so you can sit back, relax and enjoy some of the finest scenery in the World.