The Western Isles lie off the West Coast of Scotland and feature dazzlingly white beaches, loch-dotted landscapes, pre-historic sites and an amazing array of wildlife. This extended tour through the islands of the Outer Hebrides will introduce you to their stunning beauty and unique culture, all preserved by their remote location on the very edge of Europe.

Glenfinnan - tour along the famous “Road to the Isles” to see the Glenfinnan Viaduct, famous from the Harry Potter movies

Isle of Vatersay - learn the story of the SS Politician, which was the inspiration for the book, Whisky Galore

Bidding farewell to Edinburgh and Glasgow our journey takes us into the scenic beauty of the Loch Lomond and Trossachs National Park. After a break for refreshments, we travel over the vast wilderness of Rannoch Moor to reach Glen Coe, famous for its mountain scenery and being the site of the infamous massacre of the MacDonald clan in 1692.

A drive along the banks of Loch Linnhe brings us to Fort William and Ben Nevis, Britain’s tallest mountain. The next part of our journey will take us along the “Road to the Isles”, one of Scotland’s most scenic routes where we will pass the famous Glenfinnan Viaduct, made famous in the Harry Potter movies.

At Mallaig, we board the ferry for our crossing to Lochboisdale on the island of South Uist. As we make way lookout for beautiful views of the Cuillin Hills on Skye and the small isles of Rum and Canna. Dinner will be served en-route so on arrival, we head directly to our hotel on Benbecula.

Please note: Departures on 2 and 28 September 2021 will operate in reverse.

After our first Hebridean breakfast, it’s time to board our coach and make our way through South Uist and across the causeway to reach the little island of Eriskay. Meaning “Eric’s Island” in Norse, this was where Bonnie Prince Charlie landed on 23 July 1745 to start his ultimately failed attempt to capture the British Crown for the Stuart Dynasty. We’ll see the beach where this critical event in Scottish history took place.

As we continue our drive across the island lookout for an Eriskay Pony, they are unique to the island and only recently saved from extinction. We board the ferry bound for Barra where, as we arrive in Castlebay, there are beautiful views of Kisimul Castle to enjoy.

We’ll visit the castle, once a stronghold of the Clan MacNeil, it dates from the 11th Century and is the sole-example of a medieval castle in the Western Isles. During our tour, we’ll see the great hall, kitchen, dungeon and the impressive 60-foot tower.

Back on Barra, we’ll tour over to see Cockleshell Beach, the only airfield where the flight times are calculated by the tides.

Look out for “Suidheachan”, the former home of the author Sir Compton MacKenzie, who wrote “Whisky Galore”, a tale that was based on an actual event that took place here in 1941. The book spawned two movies, the classic version dates from 1949 and was filmed mainly on the neighbouring island of Vatersay, our next destination.

We’ll return to Eriskay by ferry and make our way back to our hotel, where dinner awaits.

It’s time to bid farewell to Benbecula today as we travel northwards using the causeway to reach North Uist. The landscape is scattered with little lochans, while on the coast there are beautiful sandy beaches to explore. At Berneray we catch the ferry for the short crossing to the Isle of Harris.

Our land-fall is in Leverburgh, a little village that was renamed by Lord Leverhume who planned to turn the village into a major fishing port. His dream died with him in 1925, and the project was abandoned.

We’ll make a stop in Rodel to visit St Clement’s Church, which dominates the village. Built for the Clan MacLeod, it dates from the 15th Century and was dedicated to Pope Clement I. The church tombs are amongst the most spectacular in Scotland.

We take the coastal route where we’ll see the stunning beaches at Horgabost, Borve and Scarasta. There are also fantastic views over to the little island of Taransay, which found unlikely fame in the BBC programme, “Castaway”.

We’ll make a stop so you can enjoy some refreshments in Tarbert, the primary community on the Island of Harris. From here we’ll travel through the mountainous scenery of North Harris and make our way into Lewis. Our home for the next three nights will be in Stornoway.

After breakfast, we leave Stornoway behind and make our way to the wild west coast of Lewis to visit the Standing Stones of Callanish. Thought to be over 5,000 years old there are some 50 stones including 19 monoliths marking out a megalithic avenue and a circle of 13 stones, with a cairn in the middle. The purpose of the stones is lost in the mists of time, some experts claim it was a place of ritual activity, others suggest it was some form of astronomical observatory.

Later we move on to visit the Black Houses at Gearrannan. These thatched houses were once a common sight throughout the Highlands and Islands until relatively recently. Housing livestock as well as people they were built with double walls to give extra protection from the elements. Many had no chimney, so the smoke just escaped through the turf roof.

Our last visit today is to Shawbost, where we’ll visit the Norse Mill and Kiln, a well-preserved grain mill of a style used by the Vikings, who settled in Lewis around the 12th Century. This example was used by the islanders up until the 1930s. As well as these picturesque thatched buildings to explore, there are lovely ocean views to enjoy too.

We spend this morning in Stornoway. This bustling port is the island’s main town and developed from a Viking settlement around a sheltered bay.

Today we visit Lews Castle, built as a country house it was gifted to the people of Stornoway in 1923. Today it’s a museum which contains six of the fascinating Lewis Chessmen, a collection of 12th Century chess pieces. You can also take a virtual journey through the islands in a series of wrap-around video presentations.

On the outskirts of Stornoway sits Eaglais-na h-Aoidhe, also known as St Columba’s Ui Church. This medieval building is one of the most significant archaeological sites on Lewis. It’s thought the main church dates from the 13th Century or even earlier. It became the burial site for the Macleod Chiefs of Lewis. During your visit look out for the two central carved stones, they are amongst the best examples to be found in Scotland.

Later we travel northwards to the most northerly tip of the island which has been home to generations of hardy seafarers. We’ll visit the Port of Ness before moving on to the Butt of Lewis, where the Atlantic waves crash into the cliffs, guarded by a unique lighthouse designed by the prolific lighthouse engineer, David Stevenson in 1862.

We have an early start this morning as we head to the ferry terminal for our sailing back to the mainland. The crossing of The Minch will take around 2 hours 30 minutes, and breakfast will be served on board.

The sheltered waters of Loch Broom will guide us towards the picturesque town of Ullapool, where we disembark. Back on our coach, we’ll travel through the North West Highlands to reach Inverness, the Capital of the Highlands.

Our journey south will continue into the picturesque Cairngorms National Park then through the Grampian Mountains to reach Highland Perthshire.

After a break, we’ll continue through the Kingdom of Fife, then across the Forth Estuary to reach Edinburgh, then onwards to Glasgow.

If you are flying internationally to reach United Kingdom then it is worth considering arriving a day early to relax and let the jet-leg subside.

Please email us for a quotation at info@scottishtours.co.uk. 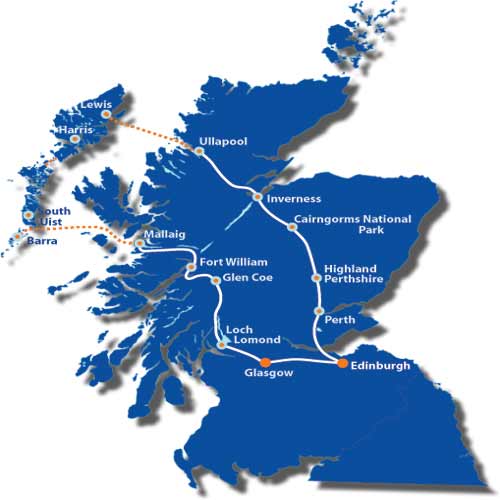 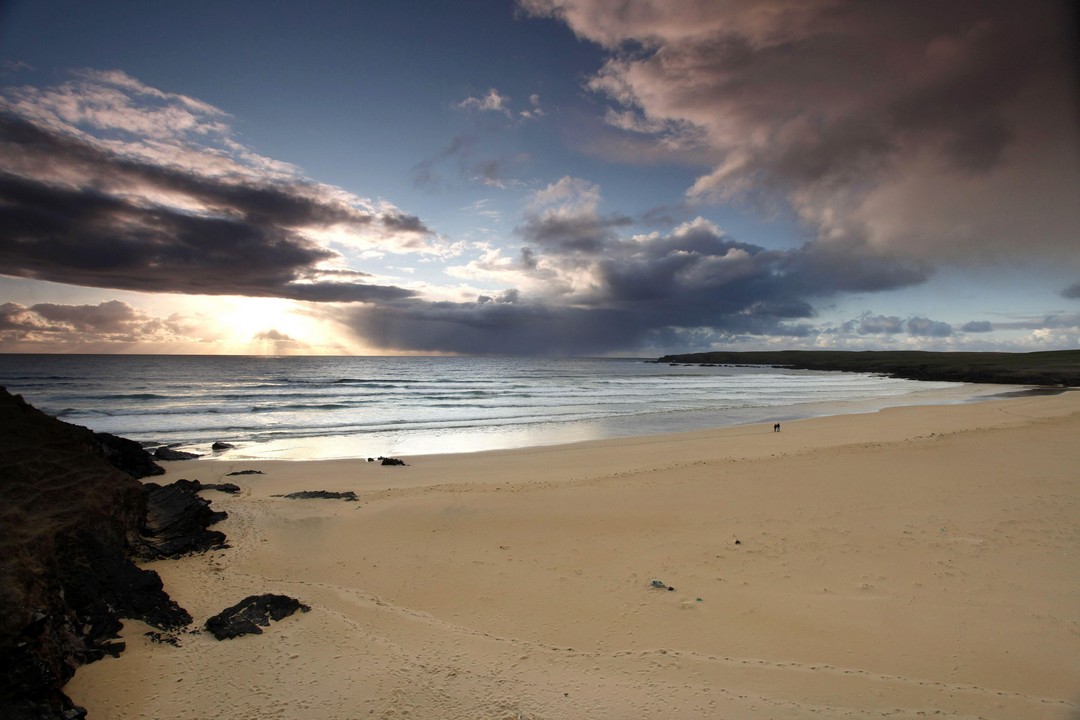 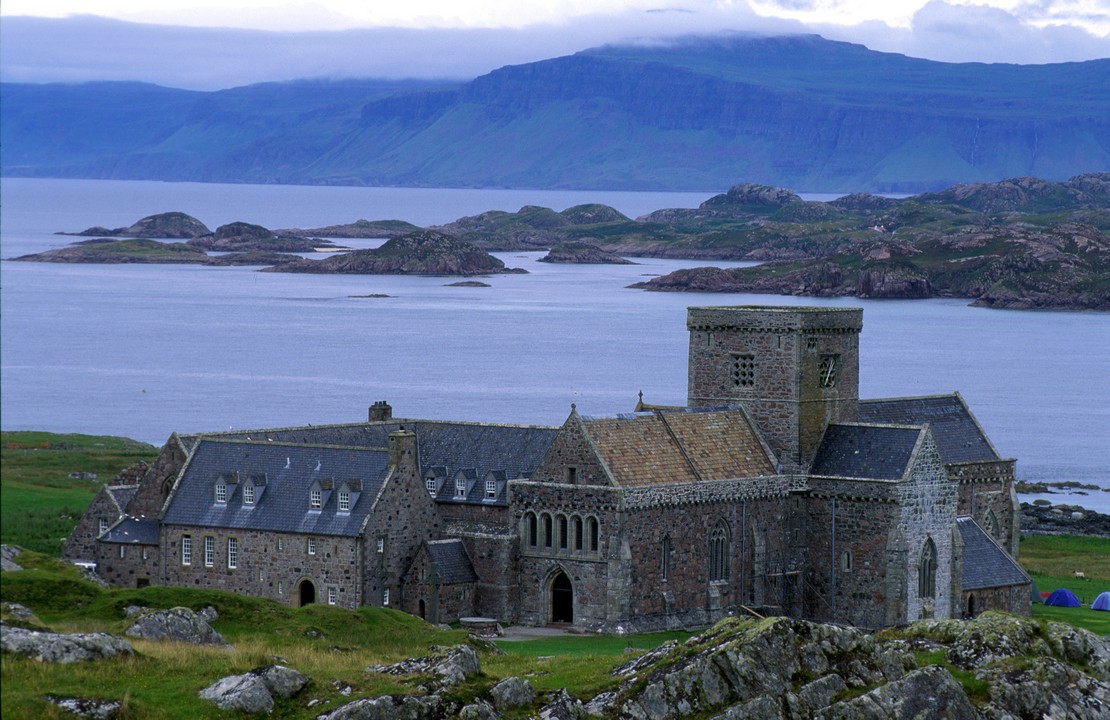 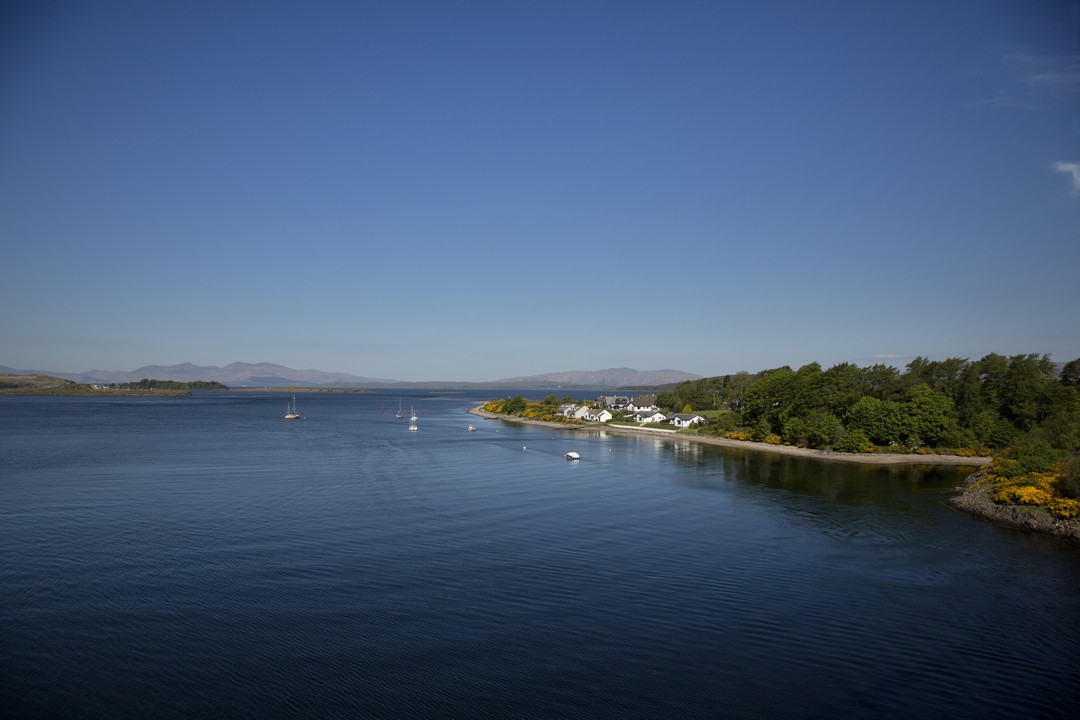