Guide to The Cairngorms National Park

The Cairngorms is the UK’s largest national park.  An area of outstanding natural beauty in the magnificent Scottish Highlands. ‘The snowiest, windiest, coldest part of the UK, containing some of its highest mountains.’ according to acclaimed nature writer Nan Shepherd, who made her home there and documented her journeys through the remarkable landscape. 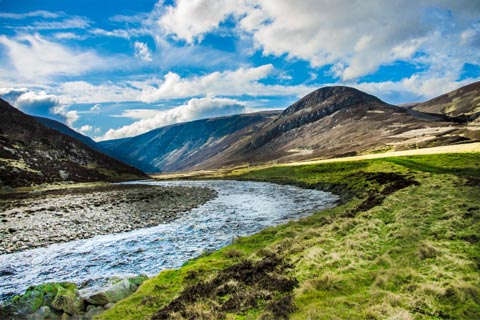 Where are the Cairngorms?

Sitting in the heart of the Scottish Highlands, the Cairngorms National Park extends over 4,528 sq km (1,748 sq miles). It was established in 2003.

The park boundaries include Kinloch Laggan to the west and Dinnet on Royal Deeside to the east. To the south, Killiecrankie in Highland Perthshire is included and Grantown-on-Spey in the north. 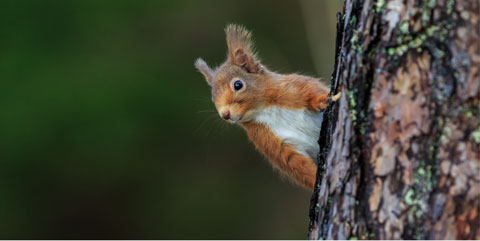 The Cairngorms National Park is very well served by transport links, so it is straightforward to get to the towns and villages in the Cairngorms region from all parts of Scotland.

The A9 road runs from Falkirk in central Scotland through the Cairngorms north to Thurso. The Highland Main Line railway goes from Glasgow and Edinburgh to Inverness.

Both the A9 and the Highland Main Line cross the famous Pass of Drumochter, the main mountain pass between the northern and southern central Scottish Highlands.

Top things to see and do at the Cairngorms

The national park is most famous for The Cairngorms mountain range, but there is much more to see and explore in the Cairngorms region.

Loch Morlich is one of Scotland’ most scenic lochs. It has a beautiful sandy beach and is surrounded by large and ancient pine trees.

It’s also a popular spot for water sports, and the views of the surrounding Cairngorm peaks are stunning.

The Cairngorms is the UK’s most significant area of high ground. Some of the highest mountains in the United Kingdom are located in the Cairngorms National Park. The Cairngorms mountain range contains 55 Munros – these are peaks of 916m and above. The highest peak in The Cairngorms is Ben Macdui, at 1309m. The next highest is Braeriach, at 1296m, and Cairn Toul at 1291m.

Read more about Scottish mountains in our Guide to Scottish Mountains blog.

Whisky distilleries in and around the Cairngorms National Park 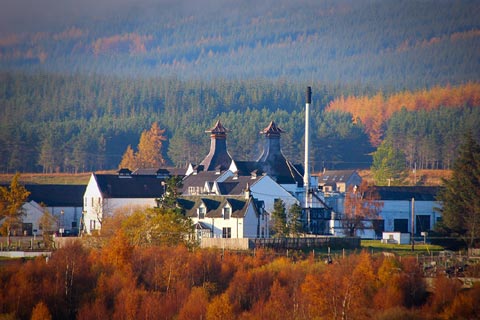 You really are spoilt for choice if you’re a fan of whisky! The world-renowned Speyside whisky-producing region extends partly into the area of the Cairngorms National Park.

The two best selling Scottish single malt whiskies globally, The Glenlivet and Glenfiddich, are produced in the Speyside region. The area is home to roughly half of Scotland’s distilleries, including Tomatin, Dalwhinnie, Tomintoul, and Royal Lochnagar.

Many distilleries are open to the public and have visitor centres, where you can take a tour to find out how the ‘water of life’ is produced and taste a sample of the finished product.

Experts regard the Cairngorms as the most extensive “arctic” area in the United Kingdom, making the whole area of considerable national and European importance.

Due to its rare alpine habitat, the Cairngorms mountain range is home to a wide range of rare plants, birds, and animals that are uniquely adapted to survive in this extreme environment.

If you visit the Abernethy National Nature Reserve, near Loch Garten, you might be lucky enough to spot a crested tit, pine marten, capercaillie or an osprey.

Vast tracts of ancient Caledonian Pinewood can be seen throughout the Cairngorms, and there’s even a herd of 150 reindeer! These beautiful animals are free to roam over an enclosed area of some 1000 acres at Glenmore Forest Park near Loch Morlich. You can take a guided tour to visit the herd and get up close to the tame and friendly creatures.

There are lots of historic castles scattered throughout the Cairngorms National Park. 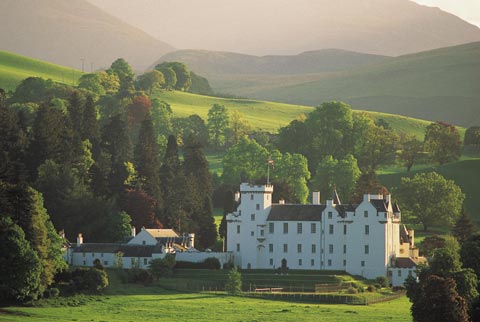 Probably the most famous is Balmoral, in beautiful Royal Deeside. Queen Victoria fell in love with the Balmoral Estate when she visited in 1848.

The castle is privately owned by Her Majesty Queen Elizabeth’s who, traditionally, holidays here during August and September together with other members of the Royal Family.

Blair Castle, in the village of Blair Atholl, is the seat of the Duke of Atholl. It dates back to 1296 and has seen its share of Scottish history. The ancient stronghold was besieged by Cromwell’s army in 1652 and then by the Jacobites in 1746, just before their final defeat at Culloden.

The castle has hosted notable visitors such as Mary, Queen of Scots in 1564, Queen Victoria and Bonnie Prince Charlie.

A massive part of the appeal and a big reason why the Cairngorms is known worldwide is due to skiing and other winter sports! The National Park is home to 3 of Scotland’s 5 ski centres: CairnGorm Mountain, Glenshee and The Lecht. 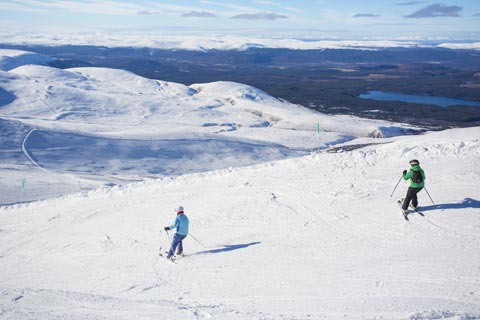 Glenshee, near Braemar, is the largest snow sports resort in the UK. It’s home to The Tiger Run – an infamous ‘black’ graded slope, meaning it’s one of the steepest and most challenging in Scotland.

Cairngorm Mountain, close to Aviemore, is the highest and the most popular of Scotland’s resorts. It has been trading for over 50 years and has the longest easy ‘green’ graded skiing run, at 2.2 miles. It’s also home to the UK’s highest post box and phone box.

The Lecht is the smallest of the ski resorts, situated in the eastern part of the Cairngorms National Park near Tomintoul. It’s known as the most family-friendly of the ski centres and has various facilities to make it easy for little ones to learn how to ski safely and enjoyably.

Some of the main towns and villages in the Cairngorms

The snow sports centre of the Cairngorms has a lot to offer, even if you’re not a skier. This busy village has plenty of shops, cafes and restaurants, spectacular scenery and plenty of opportunity for walking, climbing and biking. 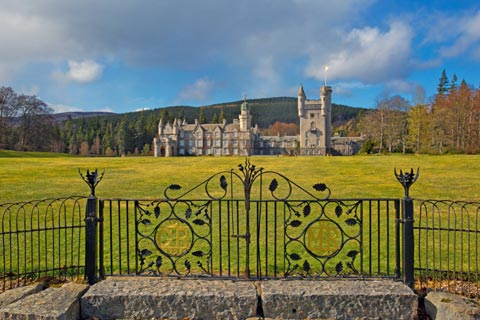 A lovely Victorian village at the heart of Royal Deeside, it’s the closest town to Balmoral Castle, where the Queen and her extended family stay during the summer months, and it’s also the home of the famous Royal Lochnagar whisky distillery.

Braemar is within easy driving distance of many historic castles such as Dunnottar, Crathes, Blair and Glamis. It hosts the annual Braemar Highland Gathering, the premier event of its kind in Scotland.

Just outside the town of Kingussie, Ruthven Barracks is a small, well-preserved army barracks built in 1719 after the Jacobite rising of 1715.  The compound consists of two large, three-storey blocks, each with two rooms per floor. The Barracks are maintained as an Ancient Monument by Historic Scotland and are accessible at all times without entrance charge. 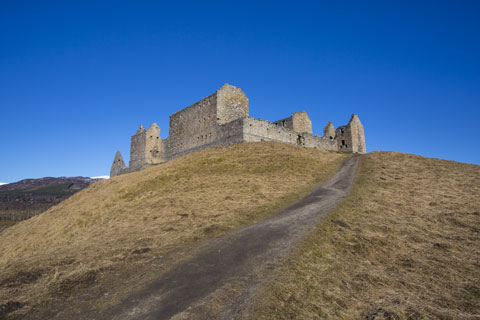 Newtonmore is a lovely, friendly village surrounded by typically stunning Highland scenery. The community prides itself on being closest to the geographical centre of Scotland, and a stone marks the spot.

Don’t miss The Highland Folk Museum, where you can see what life would have been like in a typical 18th century Highland village.

Tomintoul is the highest village in the Scottish Highlands. The Tomintoul distillery produces an award-winning single malt, and a diverse array of local wildlife, including many of Scotland’s endangered species, live in the surrounding wilderness.

It’s easy to explore the many attractions of the Cairngorms National Park on one of our Scotland tours from Edinburgh, Glasgow and Inverness.

Let us introduce you to the beauty, nature and history of this beautiful area.