In our second blog covering the Outer Hebrides, we are going to concentrate on the neighbouring islands of Harris and Lewis. You can read our earlier blog which covered the islands of Barra, Eriskay, South Uist, Benbecula and North Uist here. These two islands attract visitors who come to experience stunningly beautiful beaches, wild landscapes, enthralling wildlife, prehistoric sites and a unique culture based on the Gaelic language and traditions.

Discover more about Harris and Lewis in our latest blog. 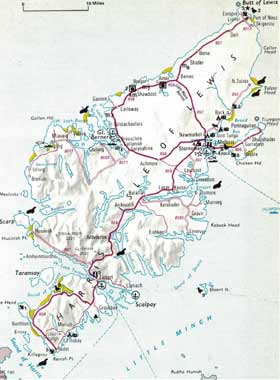 Ferry to Harris and Lewis 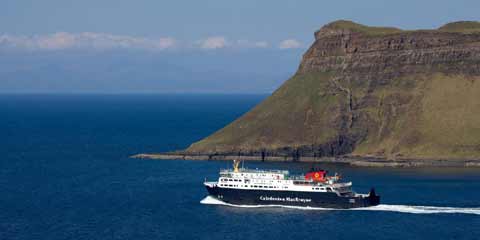 Caledonian MacBrayne offer several ferry routes to Harris and Lewis. The main service is across The Minch, between Ullapool and Stornoway. There are two return crossings per day which are operated by the modern MV Loch Seaforth. The journey time is 2 hours 30 mins.

A secondary route operates from Uig on Skye to Tarbert, Isle of Harris. The is one return crossing each day, except Thursdays, with a crossing time of 1 hour 40 mins.

It’s also possible to access Leverburgh (Harris) across the Sound of Harris from Berneray (North Uist).

It may surprise you to learn that Scotland often comes top of the list when it comes to the World’s top beaches. Forget Thailand or the Caribbean and head to Harris instead, where you’ll often have the experience of beach-combing the bleached white sands without another person in sight. 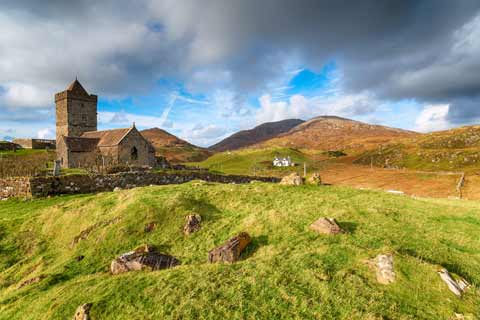 Take the single-tracked road through South Harris, and you’ll reach Leverburgh, a village that was once planned to be the centre of a massive fish-processing enterprise. The concept was thought up by Lord Leverhulme, who bought Harris and Lewis in 1918.

The plans for this extraordinary venture were scrubbed on his death in 1925, but it’s quite a thought that some 10,000 workers were going to live in this remote little village.

Continue to the end of the road, and you’ll come to Rodel, where you’ll find glorious St Clements Church. This beautiful 15th Century church was founded by the 8th Chief of the Clan MacLeod, Alasdair “Crotach” MacLeod, whose intricately carved wall tomb can be found inside.

To the north of the island lie the Harris Mountains, including Clisham, the tallest peak in the Outer Hebrides. You’ll also find Loch Seaforth (Siophort) which straddles the border between Harris and Lewis. 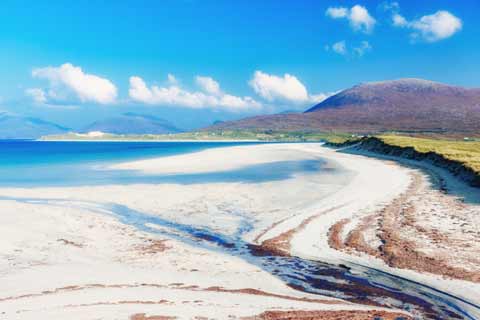 Extending for miles this curved bay of pure white sand and turquoise water looks out over the Sound of Taransay and has the mountains of North Harris as a backdrop.

It’s no wonder that Luskentyre has been voted one of Britains most beautiful beaches.

The island of Taransay sits a short distance away. It’s uninhabited now and featured in the popular BBC programme, Castaway.

Other beaches on Harris you might want to explore include Scarista, Borve and Horgabost 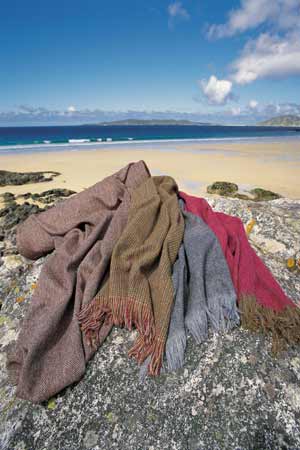 The most famous export from the Isle of Harris is Tweed, a hard-wearing fabric that has become a modern-day fashion icon. Who wouldn't like a Harris Tweed iPad cover after all?

For the real thing look out for the Orb trademark on the label which means the product has been dyed, spun and finished in the Outer Hebrides.

Many workers still work at home-based looms weaving this luxurious fabric by hand. If you’d like to watch a demonstration of the weaving process, then plan to visit The Weaving Shed on the neighbouring island of Lewis.

Tarbert is the principal community on Harris. Incidentally, you’ll find several Tarbert or Tarbet’s in Scotland as the name means “a narrow isthmus” where a boat could be pulled from one stretch of water to another. 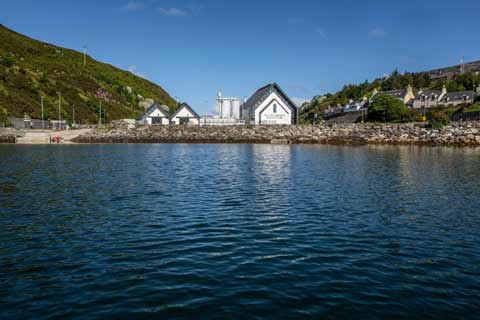 A relatively new addition in Tarbert, Harris is the Isle of Harris Distillery. Opened in 2015 the distillery is producing the first legally produced whisky on the island.

In the meantime, the distillery has gained many fans for it’s Isle of Harris Gin which is made using many botanicals including Sugar Kelp seaweed.

The wild Atlantic coastline and desolate peat-bogs found on Lewis contrast with the mountainous scenery and expansive beaches seen in Harris.  Stornoway, is the capital of the Outer Hebrides. It has a large natural harbour and is the main ferry port for Lewis. It makes an excellent base for discovering the islands many attractions.

If you are spending time in Stornoway seek out the public art which is displayed throughout the town. Our favourites are The Herring Girls statue at the South Beach Car Park and the Highland Cow outside the Co-op supermarket. 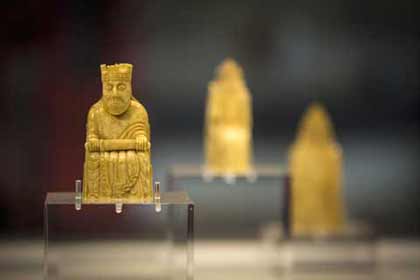 Impressive Lews Castle is the new location for the Museum Nan Eilean. Amongst the many exhibits and artworks you’ll find here are the ornate Lewis Chessmen. Discovered at Uig in 1831 it’s thought they might have been buried by a shepherd in the 12th Century.

Of the 93 known to be in existence six pieces are on display here and it’s thought they date from between AD1150 and 1200.

Harry Potter fans will remember that Ron and Harry came face to face with one in Harry Potter and the Philosopher’s Stone.

Lewis is famed for its ancient history. The mysterious Callanish Standing Stones rival Stonehenge in their importance and have a striking position allowing them to be seen for miles around.

With a picturesque setting overlooking Loch Roag, the circle is made up of 13 stones with a central monolith which is 12 ft (3.6 m) tall.

The purpose of Callanish is an enigma with some experts claiming it was used to predict a solar eclipse. Without a doubt, it was of great importance to the local people. 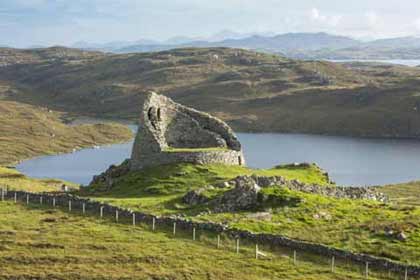 A short distance away lies another ancient treasure, Dun Carloway Broch. A broch is an Iron Age building that is only found in Scotland, and they were thought to have been built as a defensive home for a local chieftain or community leader.

This impressive stone tower is thought to have been built between 100BC and 300AD and has walls over 30 feet (9m) tall.

It has a commanding position overlooking Loch Carloway. 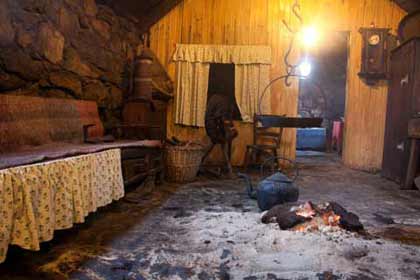 This style of housing was once commonplace in the Outer Hebrides. These cottages had thick double walls filled with peat for insulation. The roof was thatched with heather and straw, which was weighted down with stones.

There was only one door and no chimney, so the smoke from the fire just filtered through the roof.

Interestingly, a black house was part home, and part byre so was shared by humans and cattle. This primitive type of living continued up until the 1960s.

The remains on an Iron Age village were uncovered by a great storm as recently as 1993. The excavations that followed provided remarkable insight into life here between the 6th and 9th Centuries. A reconstructed Iron Age house, has been built close to the site tells the fascinating story. 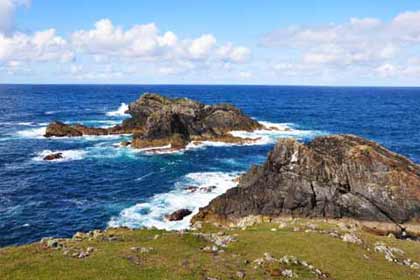 Take a walk on the wild side where the Atlantic breakers crash against the cliffs, protected by the lighthouse designed and built by David Stevenson.

Home to a noisy population of seabirds the cliffs tower 60 to 80 feet (18 to 24 m) above the ocean. Look out for the gannets swooping into the water catching fish for their next meal. Dolphins and minke whales can also be spotted from mid-summer onwards.

With nothing between here and the coast of Newfoundland, it may not surprise you to know that the Butt of Lewis has an entry in the Guinness Book of Records as the windiest place in Britain.

If you want to discover the natural beauty of the Outer Hebrides for yourself, we have a wide selection of Island tours available. From Inverness check out the 3 day/2 night Hebridean Discovery Small Group Tour which focuses on Harris and Lewis. Departing from Edinburgh and Glasgow the Grand Tour of the Outer Hebrides offers a comprehensive island-hopping adventure visiting no less than seven different islands in just 6 days.

Is an island holiday on your bucket list? The Outer Hebrides are just one of the many Scotland island holiday options available with Scottish Tours. Why not plan your ideal island adventure today.