Top Things to do in Leith

When you visit Edinburgh, the chances are a visit to Edinburgh Castle and a walk down the Royal Mile will feature on your ‘to do’ list. Yet have you considered venturing slightly further out to Leith?

Leith is a port in Edinburgh bordering the Firth of Forth. It’s situated just a couple of miles from the city, making it easy to get to when you visit and offers an eclectic mix of things to do too.

There’s no better place to start than exploring some of the rich history that has helped make Leith the iconic place it is today. 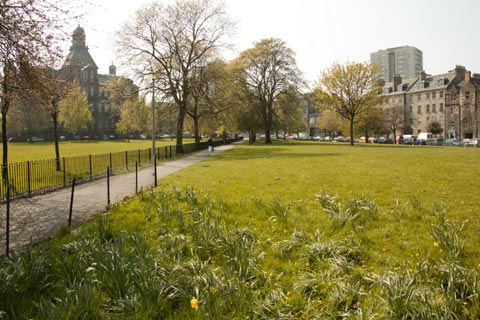 We bet you didn’t know that Leith is also a place of ‘firsts’! Way back in 1744, the first-ever golf rules in the world were created for Leith Links.

Fast forward a hundred years or so, in 1886, Leith Hospital started to allow female medical students in for training (being the first one in Scotland to do so), whilst the very first plane flown in Scotland was actually built in Leith.

With the Leith motto being that of ‘persevere’, it’s clear that perseverance really paid off for this Edinburgh port!

The Port of Leith

Originally serving as the port for Edinburgh, Leith once held the title of being the major port for all of Scotland, up until the 18th century when Glasgow and the West took over the mantle.

Scotland would import grain, timber and wine via Leith port and export coal to continental Europe. The importing and exporting of goods is no longer the primary use of the docks today. Instead, it has become a popular calling point on cruise ship itineraries.

Did you know that although now considered a suburb of the City of Edinburgh, this wasn’t always the case? In fact, back in 1833, Leith was granted independence from Edinburgh before both places came together in 1920.

When you visit, why not experience some of this history for yourself? Robert Burns’ statue is a great place to begin, with the Scottish poet being commemorated for all to see back in 1898.

Interestingly there seems to be no specific reason why a statue was put up in Leith in the first place – to this day, there is no particular connection known between the great Rabbie Burns and Leith. In saying that, we still think it’s worth a visit… if just to keep track of which part of Leith the statue is located. It’s been moved around a few times due to traffic several times!

Then there’s the Corn Exchange, so-called due to the ties between Leith and the grain market. The building has undergone several transformations and is now known as the ‘Creative Exchange’, helping those who work in this particular industry. When you look, be sure to pay attention to the artwork on the outside – it’s a sight to behold! 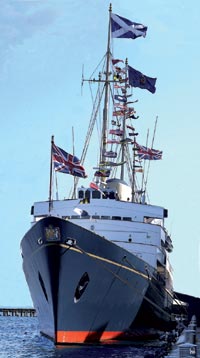 Finally, we had to include Queen Victoria’s Statue on this list. Making its first appearance in Leith back in 1907, it’s a nod towards some of the other royal connections you’ll find in Leith, such as those in association famous with the Royal Yacht Britannia, bringing us nicely on to our next ‘must do’ in this Edinburgh port.

The chances are, if you’ve heard of Leith, you’ll also have heard of the Royal Yacht Britannia, which now lives at Ocean Terminal – you can’t come to Leith without seeing this fine vessel with your very own eyes.

As you’ll have guessed from the name, the Royal Yacht Britannia does indeed have Royal connections. This yacht acted as the residence for the Queen and Royal family for more than four decades and amassed a fair number of miles when out on its travels… more than one million miles to be exact!

What happened to the Royal Yacht Britannia 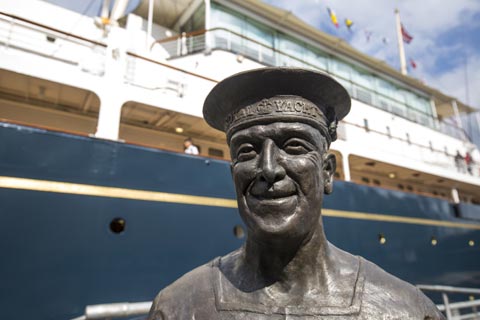 Britannia was decommissioned in 1997. It may no longer be travelling the seven seas, but it’s now open to visitors, making the Royal Yacht Britannia a top-rated visitor centre.

Aboard Britannia, you’ll be able to enjoy a bite to eat in the Royal Deck Tea Room and purchase some souvenirs in the Gift Shop too.

In fact, if you’re a fan of retail therapy, we highly recommend a shopping spree at the nearby Ocean Terminal Shopping Centre.

It’s quite the experience browsing the shops whilst overlooking the magnificent Royal Yacht Britannia thanks to the cleverly designed glass frontage of this shopping centre! 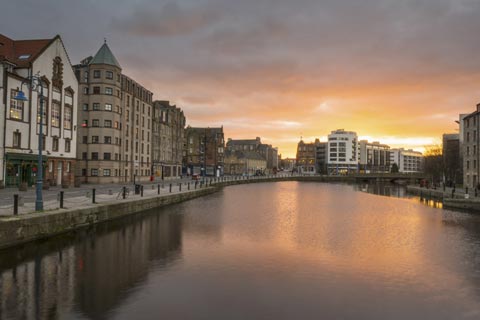 There’s something delightful about being by the water if you ask us, making you take the time to sit back and really take it all in. Why not head to The Shore where you can relax and gaze out over the Water of Leith.

In fact, we’ve dedicated a whole section just to eating when in Leith… but more on this shortly!

Here you’ll find lots of places to eat and drink, including places that specialise in seafood (which unsurprisingly is a popular cuisine choice down at the waterfront)!

The water of Leith 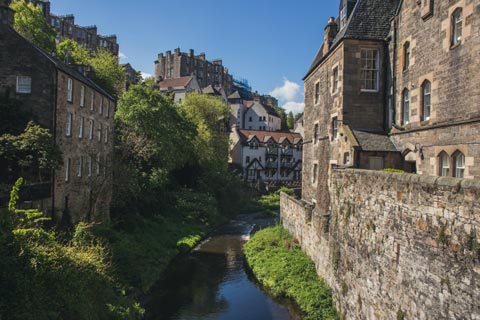 Looking for a Leith Walk to try out on our trip? Why not have a go at The Water of Leith Walkway? Get closer to nature and take in some of the stunning landscapes Scotland has to offer.

This walk will take you through the forest and trees, under bridges and alongside the water through the delightful Dean Village. You can even cycle along this walkway too, if you prefer.

However you choose to experience it, make sure to keep an eye out for the wildlife along the way. You might spot otters and herons on your travels. Both are known to live in these parts.

Scotland serves up lots of different cuisines, and Leith is no exception. There are so many lovely places to eat and drink in the area that we couldn’t possibly cover them all. Instead, we’ve put a couple below to get you started – and that we hear come highly recommended! 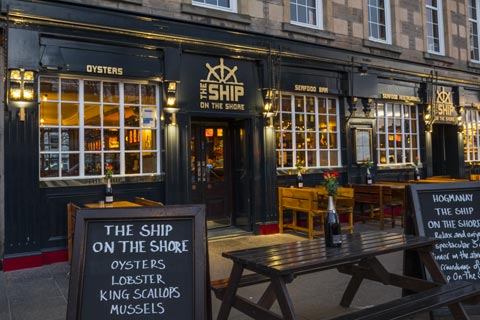 The Ship On The Shore is your go-to when it comes to seafood. It’s just a bonus as far as we’re concerned that it also happens to be a champagne bar!

From their seafood platter to lobster, whatever you’re craving, this is the place to go. They’ve even got a Fruits de Mer Royale you can view from all angles (literally) on their website – we take no responsibility for any hunger pangs you experience as a result!

For something a little bit different, why not try out Mimi’s Bakehouse? They’ll introduce you to a new concept in afternoon teas – their ‘Beforenoon Tea’, a breakfast version of the more traditional sandwiches and cake affair we’re all familiar with.

If you seek fine dining possibilities you’ll find that Leith has several to choose from including award-winning The Kitchin and Restaurant Martin Wishart. 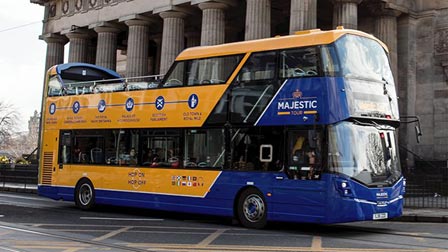 How to get to Leith from Edinburgh

If you would like to enjoy the best views and learn more about Edinburgh, step aboard the Majestic Tour. The tour takes in Royal Residences, Georgian New Town and the ancient Royal Mile as it heads towards the Royal Botanical Gardens and Ocean Terminal.

Leith is one of Edinburgh’s twelve delightful neighbourhoods. Each has a style and feel of its own and are well worth exploring during your time in Scotland’s Capital.

Scottish Tours makes it easy to visit Edinburgh from London with our selection of train-inclusive packages.