Sitting in the shadow of mighty Edinburgh Castle the Grassmarket is one of Edinburgh’s most historic areas. During its long existence, it has been the scene of executions, murders and riots. Thankfully those days are behind us, and today some 50 independent traders call the area home. It’s also a trendy food and drink destination.

So why not kick back, pour a coffee and join us as we discover all about the Grassmarket Edinburgh area.

What is the Grassmarket Edinburgh?

For over 500 years this square in the heart of Edinburgh’s Old Town has been an important gathering place. It’s been a trading area since the earliest of times and, if you visit the Grassmarket today, you’ll find it takes just a little imagination to visualise the hustle and bustle of a busy market day during the Middle Ages. 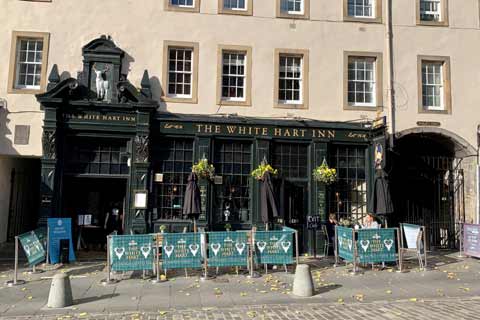 The large square is surrounded by traditional tenements and overlooked by Edinburgh Castle.

Some of Edinburgh’s oldest hostelries can be found here including, what’s thought to be the City’s oldest public house, The White Hart Inn.

Robert Burns stayed here on his last visit to Edinburgh in 1791. The poet, William Wordsworth, also stayed here with his sister during their visit to Scotland in 1803.

Two notorious customers of the Inn were Burke and Hare, but we'll tell you their story, a little later on.

Recently, when part of the Grassmarket was being redeveloped, the excavations that took place on the site found traces of Bronze Age activity. Cooking Pits and fragments of charcoal were discovered which could be traced back to around 2000BC. 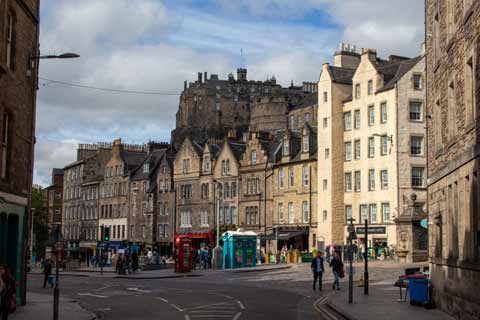 By 1477 the area had become Edinburgh’s primary livestock market, although there is evidence that animals were slaughtered here as early as the 11th and 12th Centuries.

At that time the street was around half the length it is now. The market took place at one end, and the horses and cattle grazed on the grass pasture at the other. It’s thought that is how the area got its name.

From the 1800s onwards the area became a refuge for immigrants to the City. By the early 20th Century the area was known as “Little Italy” due to the many Italian immigrants that settled here. Many of the new arrivals became musicians or sold ice-cream from street carts. To attract attention, they shouted “Gelati, ecco un poco” (Ice Cream, here’s a little) which got them the nick-name the “Hokey Pokey men”.

In 1916, a German Zeppelin airship mounted an attack on the Grassmarket. One person died, and four were injured in the bombing. It’s said that the famous One O’Clock Gun was fired from Edinburgh Castle which put off any further activity from the airship crew and they flew on to attack another part of the City.

The Battle of Flodden took place in 1513 between the Scottish and English armies. The English were victorious, and it’s thought that around 10,000 Scots died in the fighting, including the Scottish King, James IV and much of his nobility. 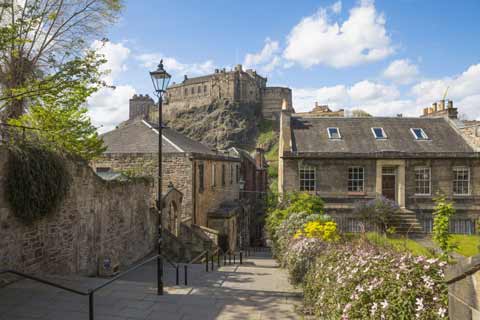 Following the battle, the citizens of Edinburgh feared an English invasion, so a wall was built around the City to protect it. It was completed in 1560, but there never was an invasion so over the centuries it was abandoned.

Today there are only a few places in Edinburgh where remnants of the wall exist. One is in The Vennel, which is at the West End of the Grassmarket.

If you take a walk up the Vennel Steps not only will you see part of the Flodden Wall, but you’ll also get one of the finest views of Edinburgh Castle the City has to offer. It’s a real Instagram hit. 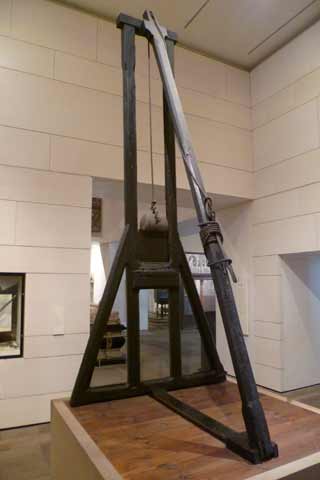 Despite being a bustling centre of commerce, the Grassmarket has a much darker side as a place of execution. From 1660 until the last hanging in 1784, many hundreds of people met their end here.

A fearsome beheading machine called “The Maiden” was built which was similar in style to the French Gilloutine. It was designed like flat-pack furniture is made today, so it could be dismantled for storage when not required. Whether it was built using a large Allen key has not been documented.

The Maiden was used in around 150 executions then, after its last appearance in 1710, it was put into storage, and when it was rediscovered, it was put on display in the National Museum of Scotland where it remains to this day.

The remaining executions that took place in the Grassmarket were by hanging. “The Last Drop” pub is situated close to where the gallows once stood.

Many of the people executed in the Grassmarket during the late 17th Century were Covenanters, who refused to renounce their Presbyterian faith. It’s thought over 100 died here during a period known as “The Killing Times.”

In 1954 the site of the executions was marked by a memorial stone.

One of the most famous public executions involved a local fish seller called Maggie Dickson. She was sentenced to death for concealing her pregnancy and the alleged murder of a newborn child. It turned out that the child was premature and had died on birth.

The sentence was carried out by hanging on 2 September 1724. The punishment was bungled, and she wasn’t killed by the execution. She came too in her coffin as she was being taken for burial. In a scene reminiscent of a comedy film she was rescued and went on to live for another 40 years and became quite celebratory in her latter years. 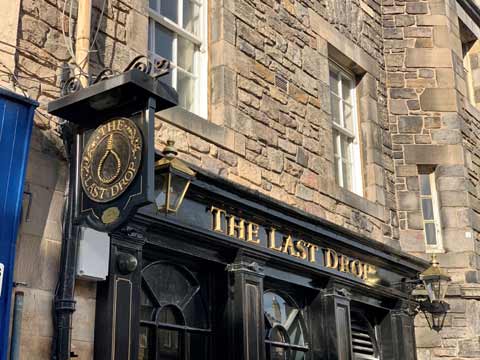 At the time that William Burke and William Hare lived in Tanners Close near the West Bow of the Grassmarket, the City was at the forefront of medical science. It was common for body-snatchers to raid the graves of the recently deceased to provide medical schools with the bodies they needed for lectures and experiments.

Burke and Hare weren’t involved in the gruesome practise of grave robbing, however. They decided on a more hands-on approach by befriending their victims in local bars then enticing them back to their lodgings where they were murdered. The bodies were sold to Dr William Knox, an eminent local anatomist.

It’s thought that Burke and Hare murdered 16 people between 1827 and 1828, although it might have been more, no one is quite sure.

What happened to Burke and Hare?

After the body of their last victim, Mary Docherty, was found by fellow residents of their lodging house the Police were called. During questioning, William Hare turned King’s Evidence providing testimony against Burke in return for immunity from prosecution.

William Burke was found guilty and hanged on 28 January 1829. After death, his body was dissected, just like his victims. His skeleton was placed on display at the Anatomy Museum of the University of Edinburgh. Rather macabrely his skin was used to create some gruesome souvenirs including a calling card case which can be seen at the William Burke Museum. 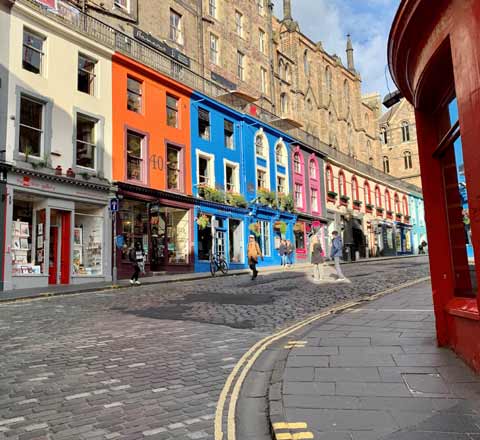 It’s said that winding cobbled thoroughfare of Victoria Street was the inspiration for JK Rowling to create Diagon Alley in the Harry Potter series.

With the colourful buildings, secret staircase and grand terrace, it would be the ideal place for a trainee wizard to pick up all their essential magical items.

Where is Victoria Street? If you walk to the eastern end of the Grassmarket before it becomes the Cowgate, you’ll find it on your left. The street winds upwards towards George IV Bridge and contains all manner of exciting emporia, bars and restaurants.

Harry Potter fans can take a stroll up Victora Street to reach the Elephant House coffee shop on George IV Bridge, it’s where JK Rowling wrote some of the Harry Potter story.

Where is Greyfriars Bobby in Edinburgh? 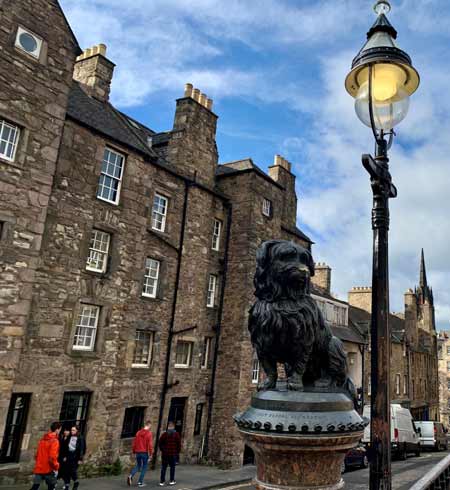 No visit to Edinburgh would be complete without seeking out the statue of Greyfriar’s Bobby. The uplifting story of this little Skye Terrier has captivated visitors for decades. Walk to the top of Candlemaker Row, opposite the entrance to Greyfriar’s Churchyard, and you’ll find the statue of Bobby.

The Story of Greyfriars Bobby

Is Greyfriars Bobby the most faithful dog in the World, well we’ll tell you the story so you can make up your own mind. To start our tale, we need to go back to 1858 when John Gray, a Constable in the Edinburgh City Police, died.

As a night watchman, he was required to have a dog and had chosen a Skye Terrier who he called Bobby.

The two of them patrolled the streets of Edinburgh, but unfortunately, the years of outdoor work took its toll on Gray, and he was diagnosed with tuberculosis which proved to be fatal.

Gray was buried in Greyfriar’s Churchyard. After the funeral, Bobby was found by his graveside, and despite being evicted several times, he returned there day after day. The Churchyard staff eventually took pity and built a shelter for him next to the grave, and for 14 years Bobby kept a daily vigil. 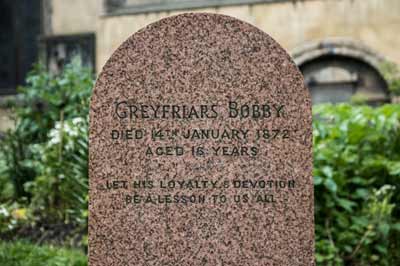 He became a well-known personality in Edinburgh, and it’s said that when the One O’Clock Gun was fired from Edinburgh Castle each day, Bobby would go to a local coffee house where he would be fed a free lunch.

The Lord Provost even paid for his dog licence and bought him a new collar. You can see it on display at the Museum of Edinburgh.

Bobby died on 14 January 1872 and is buried in Greyfriar’s Churchyard, not far from his master.

In 1961 Walt Disney told his story in the popular film “Greyfriars Bobby”. In its review of the movie, Variety said “it sets out to melt the heart and does so skilfully”, just like the real story, don’t you think!

If you intend to visit Edinburgh, it’s easy to include a visit to the Grassmarket area in your travel plans. Both the Edinburgh City Tour and The Edinburgh Tour have it in the tour route. If you’d like to hear spine-tingling stories of Edinburgh’s mysterious past choose the Edinburgh Ghost Bus Tour, but be warned, it’s not for the faint-hearted!