The four-day weekend of 2 to 5 June 2022 has been designated as the Platinum Bank Holiday Weekend. HM Queen Elizabeth acceded to the throne following the death of King George VI on 6 February 1952. Her coronation took place at Westminster Abbey in London the following year. This year marks 70 years as Sovereign, making Queen Elizabeth the longest-serving monarch in British history.

Discover historic palaces, mighty castles and even a Royal Yacht as we look at the many Royal Family Connections with Scotland. The cobbled Royal Mile is the ancient thoroughfare that links Edinburgh Castle to Holyrood Palace, HM The Queen's official residence in Scotland. Known as Royal Week, HM The Queen traditionally stays at Holyrood at the end of June, conducting meetings and, together with other members of the Royal Family, makes visits throughout the country.

Although Holyrood Palace is located in central Edinburgh, it sits on the periphery of sprawling Queen's Park, which includes the iconic peak of Arthur's Seat 823 ft (251m), which offers panoramic views over the city.

On her arrival at Holyrood Palace, the traditional "Ceremony of the Keys" takes place where Edinburgh's Lord Provost presents HM The Queen with the keys to the city. The offer is always kindly declined with the reply that the best people to look after them are "the Lord Provost and Councillors of Edinburgh". 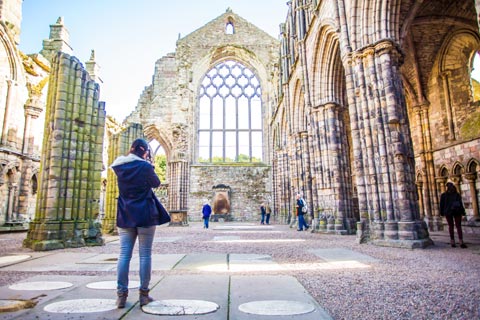 The Palace originated as a guest house for the Abbey of Holyrood, now a picturesque ruin. The Abbey was founded by David I, King of Scots, in 1128. King James V began the earliest surviving buildings of the Royal Palace in 1529.

Most of the Palace, as seen today, was built for Charles II, beginning in 1671 - though Charles never visited Holyrood. Mary Queen of Scots is the most famous historical figure associated with the Palace. She spent six tragic years of her reign there.

Prince Charles Edward Stuart (Bonnie Prince Charlie) held a ball at the Palace during his brief autumn triumph of 1745 before his defeat at Culloden. He was the last Stuart to occupy the Palace.

The revival of Holyroodhouse began when King George IV held a reception there in 1822.

Edinburgh, well the nearby Port of Leith, is the location of another Royal Residence. This time it's a floating palace, the Royal Yacht Britannia. Launched in 1953 and retired in 1997, Britannia took part in 968 official voyages and sailed a whopping 1.1 million miles during her 44-year career. 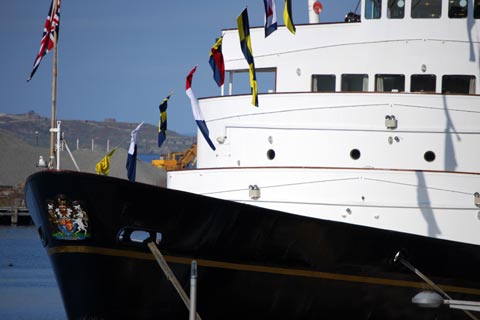 She was built on the River Clyde by the famous shipyard John Brown and Co, who also constructed the legendary Cunard liners Queen Mary and Queen Elizabeth. The ship was allegedly to have a dual role as a hospital ship during wartime, but in actual fact, this was a ruse. Her job was to carry the Queen while three specially designed ferries would house members of the Government. This small fleet would sail between remote Scottish lochs as a floating centre of command during a nuclear attack. Thankfully the plan was never put to the test!

In more peaceful times, Britannia served as a base from which members of the Royal Family could entertain VIP guests from around the World. On Royal tours, the crew of 220 yachtsmen and 20 Officers were augmented by a Royal Marines Band of 26 men.

Presidents Ronald Regan, Bill Clinton and Nelson Mandela were among the many guests who came aboard. 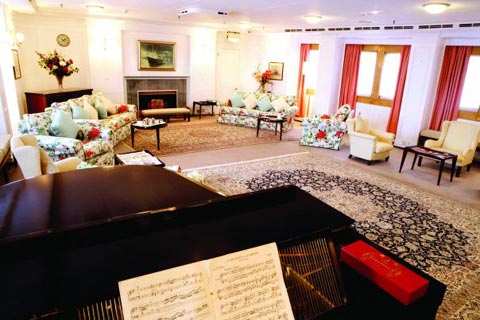 Today Britannia is a five-star attraction where visitors can take an audio-guided tour to see the Sun Lounge, State Dining Rooms and the Queen's Bedroom. Moving "downstairs", the Crew Quarters, Laundry and Wheelhouse are all on display.

Berthed next to the Ocean Terminal shopping centre, it's easy to reach by public transport from Central Edinburgh or as a stop on The Majestic Tour. 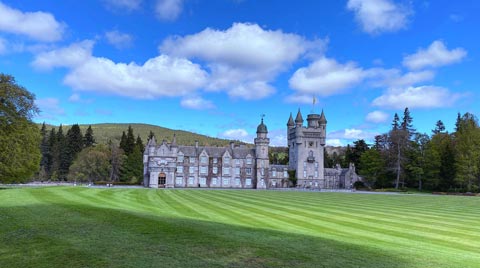 Balmoral Castle is a private residence of HM The Queen. Together with other members of The Royal Family, she stays at this favourite retreat during the summer months of August and September.

The Balmoral Estate was bought in 1852 by Prince Albert for Queen Victoria, who loved the beauty of the Scottish Highlands. She called Balmoral "my dear paradise in the Highlands".

The original 15th Century castle was too small, so a new building was constructed just a short distance away. Prince Albert was involved in the design of the new castle, which was completed in 1856, just 5 years before his death.

The castle and estate have been handed down through the generations, with improvements being made to the building and grounds over the years.

Where is Balmoral Castle?

The estate is located in the heart of the Cairngorms National Park, by the banks of the River Dee, midway between Ballater and Braemar. The area is known as Royal Deeside. In the village of Ballater, many of the local shops are decorated with Royal Warrants, signifying that they supply Balmoral with everything from bread to bacon. Even the local bus company, part of the mighty Stagecoach empire, proudly display their accreditation on the vehicles that serve the area.

Braemar is famous for "The Gathering", which combines Scottish Music and Dance with athletic competitions. Discover more about the origins of Highland Games in our recent blog.

It's possible to visit the castle ballroom, which mounts an exhibition on the history of Balmoral and the estate. The rest of the castle is closed to visitors, but the grounds are open and the stables house a small collection of carriages and cars. Visitors are only allowed between April and early August. 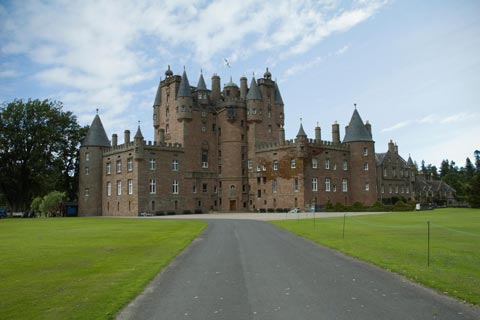 Standing in the rolling Angus countryside stands majestic Glamis Castle boasting over 1,000 years of colourful history. The castle is the fabled setting for Shakespeare's Macbeth and one of its oldest and most eerie rooms is Duncan's Hall,  named after the gruesome murder that was wholely fictional.

The Lyon family heirs have been connected by Royal blood since Sir John Lyon married Princess Johanna, the great grand-daughter of King Robert the Bruce, in 1376. Construction of the castle that we know today commenced in 1400 after Lyon was killed in a quarrel with the Earl of Crawford.

Fast forward through nearly four centuries of tumultuous events to 1767 when the 9th Earl marries the wealthy English heiress Mary Eleanor Bowes. Despite her father instructing that the family name is changed to Bowes, it evolved over the years and finally settled as Bowes-Lyon. 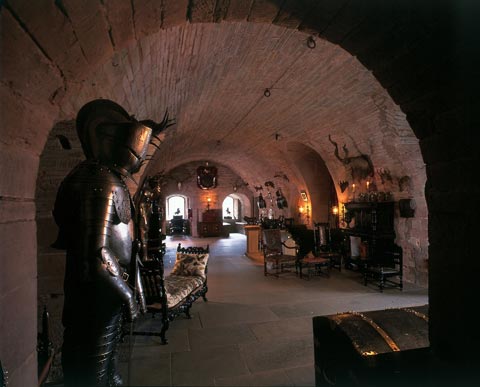 Glamis is the ancestral home of the Earls of Strathmore and Kinghorne and it was here that Elizabeth Bowes-Lyon, the youngest daughter of Lord Glamis (later the 14th Earl), had her childhood home. She later worked as a nurse when Glamis was converted into a military hospital in World War I.

In January 1923, it was announced that she was engaged to Albert, Duke of York. They married later that year in Westminster Abbey and spent part of their honeymoon at Glamis.

Three years later, Princess Elizabeth (our current Queen) was born in London. In 1930, Princess Margaret was born at Glamis Castle, the first Royal baby to be born in Scotland since 1600.

Following the abdication of King Edward VIII in 1936, Albert became King and Elizabeth, his Queen.

Our last Royal connection takes us to Scotland's north coast and the remote county of Caithness. The Castle of Mey is the most northerly castle on the British mainland and was the beloved home of Queen Elizabeth, The Queen Mother. 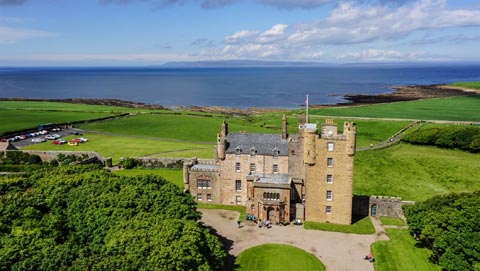 The Earl of Caithness built the castle in the 1600s for his second son. After a family feud, ownership came into the hands of George Sinclair, who changed its name to Barrogill Castle. The castle was the seat of the Earls of Caithness for over a Century.

In 1952, while grieving the loss of her husband, King George VI, Queen Elizabeth came across Barrogill. By this time, the castle had fallen into disrepair and had been for sale for several months. Queen Elizabeth fell in love with the property and bought it, despite its remote location and having no bathrooms or electricity.

A major refurbishment programme was started to bring the property up to the modern standards of the 1950s. At the same time, the name was changed to Castle of Mey. Work was also undertaken to restore and extend the gardens.

For nearly 50 years Queen Elizabeth, the Queen Mother, holidayed at the Castle of Mey. Her last visit was in October 2001, when she was aged 101. 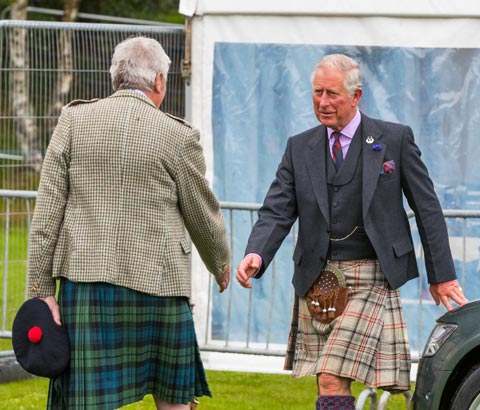 When senior members of the Royal Family come to Scotland, they are known by their Scottish honours. This goes back to the days before 1707 when Scotland was independent and had its own nobility.

Prince Charles (The Prince of Wales) is the Duke of Rothesay in Scotland. His other titles include Lord of the Isles and Baron of Renfrew. Rothesay is the main town on Bute, an island in the Clyde estuary.

Prince William (Duke of Cambridge) is known as the Earl of Strathearn. A strath is a wide valley, so Strathearn is the valley of the River Earn in Perthshire.

Get to know Scotland with Scottish Tours

Discover the real Scotland for yourself. Not only will we take you to see grand castles but also humble crofts and lonely glens so you can learn the story of Scotland and her people. Experience the natural beauty of the Highlands and our vibrant cities too.

We're proud to call this beautiful country home. We look forward to sharing it with you. Book your Scotland Tour today.