One of our favourite things about the holiday season is snuggling up at home with a good movie or box-set, and there’s a wealth of classic films and TV shows to choose from that were filmed or set in Scotland.

We’ve chosen a selection of films of all genres, showing off the full variety of Scottish filming locations. From the wild Highlands to rural Lowlands, urban Edinburgh and Glasgow, enchanting coastal locations and magical islands, you’re sure to be inspired to seek out something to watch.

Check out our guide, and find some ideas for films and tv set in Scotland to enjoy over the holiday season. 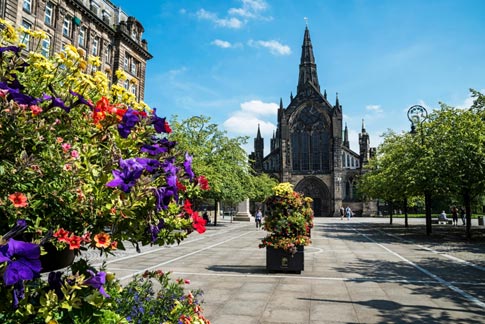 It’s the typical Scottish scenery of majestic mountains, atmospheric valleys and wild seascapes that most filmmakers come to Scotland for, but many people are unaware that the streets and buildings of Glasgow have appeared in quite a few major blockbusters.

Netflix’s Outlaw King (2018) was partly filmed at Glasgow Cathedral and Glasgow University. Fast and Furious 6 (2013) was shot around Glasgow’s financial services district, and World War Z (2013) when Brad Pit and Angelina Jolie famously sent fans wild trying to catch a glimpse of them while they stayed here, was filmed in and around George Square in Glasgow city centre. 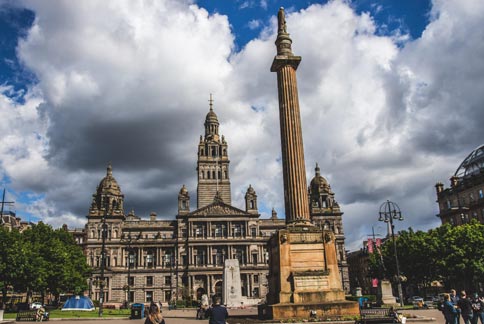 If you want an insight into the quirky and humorous nature of Glasgow and Glaswegians, look up some of the films of Glasgow-born director Bill Forsyth.

In Heavenly Pursuits (1986), Glasgow’s City Chambers stands in for The Vatican, and in Comfort and Joy (1984) the working-class district of Springburn in the north of Glasgow gets a role. There’s also That Sinking Feeling (1979), and of course, Gregory’s Girl (1981), probably his most well-known film and set just outside Glasgow in the new town of Cumbernauld.

This acclaimed director is also responsible for the classic Local Hero (1983), which we mention later. 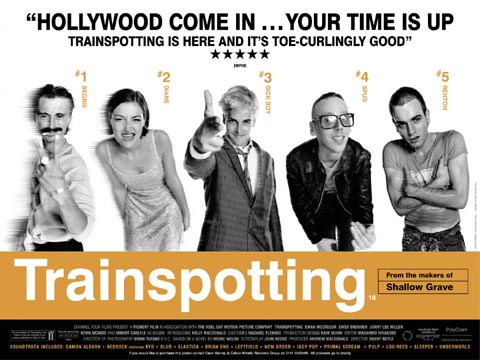 Arthur’s Seat, Princes Street, and other of our capital city’s landmarks appear in Trainspotting (1996) and its sequel T2: Trainspotting (2017), based on the books and characters created by author Irvine Welsh. These movies should fit the bill if you’re in the mood for a grittier, more up-beat film with a cracking musical score.

For a more sedate but never dull watch, the marvellous Maggie Smith plays the formidable schoolteacher in The Prime of Miss Jean Brodie (1969), based on Muriel Spark’s classic novel.

The castle and the famous Greyfriars Kirkyard can be seen as Miss Brodie leads her charges through the streets of Edinburgh.  The exteriors of The Marcia Blaine School for Girls were filmed in the former school for deaf children in Henderson Row, now part of The Edinburgh Academy.

The swanky Waldorf Astoria - Caledonian Hotel on Princes Street can be spotted in the 2006 film adaptation of Dan Brown’s The Da Vinci Code, but it is, of course, the nearby Midlothian village of Roslin, to the south of Edinburgh, where The Da Vinci Code expertly utilised the mysterious and atmospheric beauty of medieval Rosslyn Chapel.

After that literary interlude, you may be in the mood for something a bit more thrilling.  Vin Diesel filmed scenes in the streets of Edinburgh for part 9 of the Fast and Furious franchise, released in 2021; and the makers of Avengers: Infinity War (2018), the 19th film in the Marvel Cinematic Universe, filmed various dramatic fight scenes in Edinburgh’s Royal Mile, Cockburn Street, and Waverley train station.

To discover more information on movies filmed in and around Edinburgh click here.

St Andrews and the East Coast 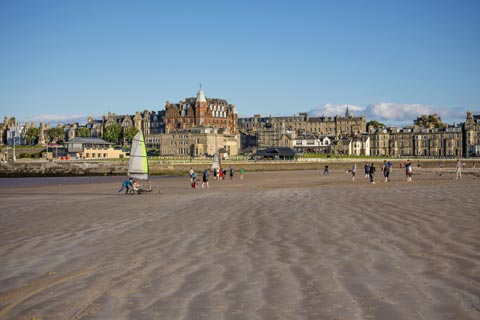 Movies filmed on Scotland’s east coast have showcased the beauty of this often overlooked part of the country.

Multi-Oscar winning Chariots of Fire (1981) is a perfect inspiring and uplifting holiday film. The beach scenes were filmed on the beautiful West Sands Beach at St Andrews, and you’ll almost certainly recognise the iconic theme music by Vangelis.

In the distinctly strange science fiction movie Under The Skin (2013), Hollywood A-lister Scarlett Johanssen played a predatory alien. Although mostly filmed in Glasgow and the Highlands, some notable scenes were shot at Tantallon Castle on the East Lothian coast.

This ruined mid-14th-century fortress looking out onto the Firth of Forth was also used in the 2018 Netflix historical extravaganza The Outlaw King, starring Chris Pine as Robert The Bruce.

The breathtaking scenery of the majestic Scottish Highlands has played a starring role in countless films and tv shows over the years. 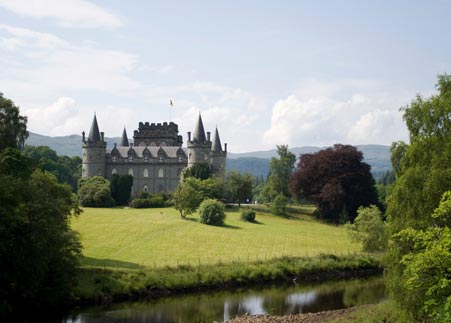 As you would expect, most of the big Scottish historical movies take advantage of the wildness of Rannoch Moor and dramatic Glen Coe, with Outlaw King (2018), Braveheart (1995) and Rob Roy (1995) all set to spectacular effect in the Glen Coe and Rannoch Moor area.

Why not combine bingeing on all that chocolate with bingeing on a classic box set? In the last episode of Downton Abbey’s third season, magnificent Inveraray Castle, in Argyll, features as Duneagle Castle, the ancestral home of Lady Rose’s parents Lord and Lady Flintshire. 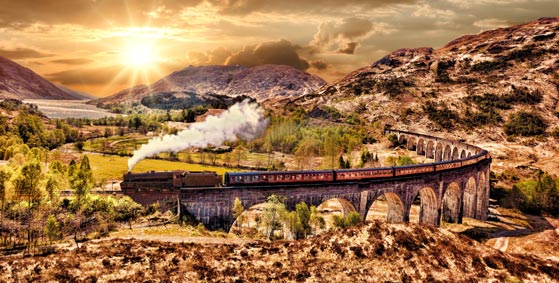 Get the kids settled down with a magical Harry Potter movie.  All 8 of the films feature scenes shot amongst beautiful Scottish landscapes, notably Glencoe, Loch Eilt, Loch Morar and desolate Rannoch Moor.

Without a doubt, though, the most recognisable of the Harry Potter filming locations is the world-famous Jacobite Steam Train travelling over the magnificent Glenfinnan Viaduct in The Chamber of Secrets.

No Christmas viewing list would be complete without at least one James Bond movie, so how about watching Daniel Craig in Skyfall (2012). The spectacular scenery of Glen Coe and nearby Glen Etive is showcased when Bond returns to Skyfall, his Scottish family home, near the end of the film. 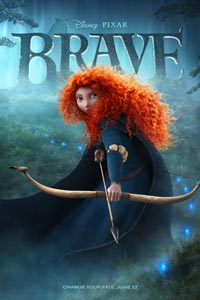 Brave (2012) is animation studio Pixar’s first fairytale and the first of their films to have a female main character. The story of the feisty and strong-willed Princess Merida is set in the Scottish Highlands around the 12th Century. Dunnottar Castle in Stonehaven was the inspiration for DunBroch Castle, Princess Merida’s home.

When Mel Gibson starred in Franco Zeffirelli’s 1990 film adaptation of Hamlet, it seemed an obvious choice to recreate the tragic Prince’s home, Elsinore, at Dunnottar Castle, with its dramatic clifftop setting. The actors were said to have declared that the film would not have been the same if it had been set anywhere else.

The Queen (2006) provides an insight into how the British Royal family dealt with the death of Diana, Princess of Wales, in 1997. Filming took place in Castle Fraser and Cluny Castle, both magnificent ‘Z-plan’ castles in Aberdeenshire. 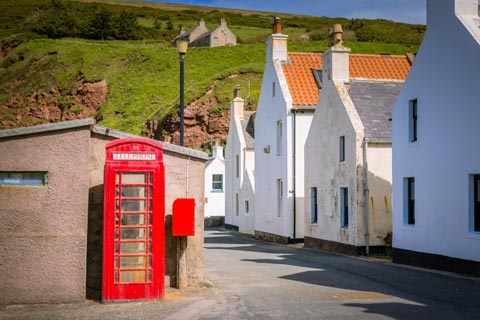 After all of these Scottish castles, the award-winning and much-beloved comedy-drama Local Hero (1983) couldn’t be more different. Typical of a Bill Forsyth movie, it is down to earth, warm, quirky and gently humorous. Featuring a fresh-faced Peter Capaldi in his second-ever big-screen appearance, the film also stars 70-year-old Hollywood legend Burt Lancaster.

The iconic red telephone box scene was shot in the tiny village of Pennan on the northern Aberdeenshire coast. Pennan stood in for the fictional village of Ferness, and fans of the film have come from all over the world to make a phone call in the telephone box.

The 18th and early 20th centuries were brought to life in parts of Scotland around Stirling, western Fife and West Lothian to film the massively popular TV epic Outlander. The picturesque Fife village of Culross stood in for Cranesmuir; Falkland became 1940’s Inverness, and the harbour at Dysart was used to recreate the port of Le Havre. 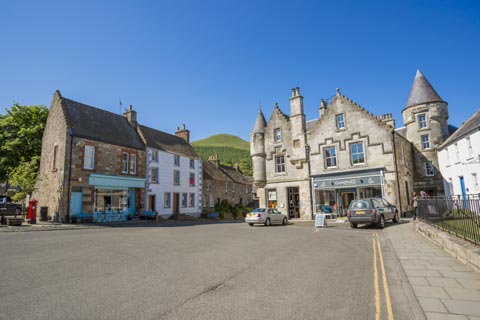 Wentworth Prison was filmed at Linlithgow Palace, famous as the birthplace of Mary Queen of Scots in 1542 and one of the principal residences of Scottish monarchy throughout the 15th and 16th centuries.

Ruined Midhope Castle near South Queensferry stood in for Lallybroch, Jamie’s ancestral home. Further west towards Linlithgow, the ‘ship-shaped’ Blackness Castle, sitting on a promontory looking out to the Firth of Forth, was used as Fort William.

Medieval Doune Castle in the village of Doune, near Stirling, has made appearances in various TV and film productions over the years. As well as playing Winterfell in Game of Thrones and featuring in Monty Python and the Holy Grail, it was used as Castle Leoch, the seat of Clan Mackenzie in Outlander. 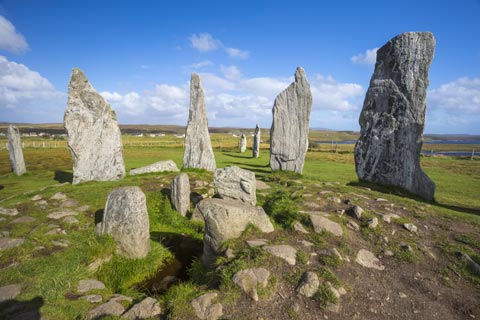 We’ve already mentioned the animated film Brave, starring the voices of Kelly MacDonald, Billy Connolly and a host of other famous actors. The mysterious 5,000-year-old Callanish standing stones on the Isle of Lewis were the inspiration for the standing stones in the film.

In Stanley Kubrick’s 2001: A Space Odyssey (1968), the red planet Jupiter was recreated in the area around Loch Airigh on the Isle of Harris. The rock surrounding Loch Airigh, known as anorthosite, is similar to that found on the moon. The barren landscape was filmed from low flying planes and tinted using coloured lenses to give it an even more unworldly feel.

Finally, the ideal dose of couthy Scottish whimsy for you to enjoy over a dram or two, perhaps. Whisky Galore (1949) was directed by Alexander Mackendrick and produced by the world-famous Ealing Studios. The comedy tells the tale of a group of locals on an isolated island during the 2nd World War, who raid a shipwrecked consignment of 50,000 cases of whisky.

Filming was primarily done in Castlebay, the main settlement on the small island of Barra.

If the Scotland that you’ve seen on the big screen attracts you, why not visit the real place and walk in the footsteps of your favourite stars.

Scottish Tours offers itineraries that feature some of the most iconic filming locations our beautiful country has to offer.

Take your next set-jetting adventure with Scottish Tours.