Rosslyn Chapel is one of Scotland’s top visitor attractions, sitting between a prehistoric glen and the outskirts of modern Edinburgh.

The chapel, in the village of Roslin, is one of the very few medieval collegiate chapels of the time to still survive today, which is why it is such an important monument. This exquisite small chapel is surrounded by mystery and speculation as to the historical secrets it may hold.

The beauty of its setting, in rural Midlothian, and the mysterious symbolism of its ornate stonework have attracted and intrigued writers, artists and visitors ever since it was built.

Where is Rosslyn Chapel?

The village of Roslin lies just 7 miles south of Scotland’s capital city. Getting to Rosslyn Chapel from Edinburgh is easy and makes a lovely day trip.

A scenic drive, or the Lothian number 37 bus from Edinburgh city centre, will get you there in about 50 minutes. It’s possible to visit all of the chapel, including the vault, but not the sealed crypt underneath.

The history of Rosslyn Chapel

Built as a family chapel, Rosslyn Chapel was founded in1446 by William St Clair, 3rd and last Prince of Orkney, and, in 1450, was dedicated as a Catholic Collegiate Chapel of St Matthew. St Clair died in 1484 and was buried in the chapel. It then continued as a working catholic collegiate chapel for over 100 years. 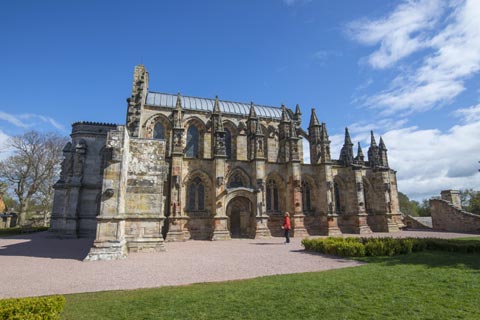 Following the Scottish Protestant Reformation of the late sixteenth century, the Chapel’s treasures were seized in 1571 and the St Clair family was forced to destroy the altars and were no longer allowed to worship at Rosslyn.

It is a wonder, for which we must be grateful, that when Catholic iconography was systematically destroyed elsewhere during the Reformation, that Rosslyn Chapel’s carvings were spared.

Sir William Sinclair died at the Battle of Dunbar in 1650 and is thought to be the last knight to be buried in full armour in the crypt below the chapel, in the family tradition.

During the English Civil Wars when Oliver Cromwell’s troops bombarded the nearby Roslin Castle in 1650, they stabled their horses inside the chapel. This may have been what saved it from being destroyed by Cromwell. 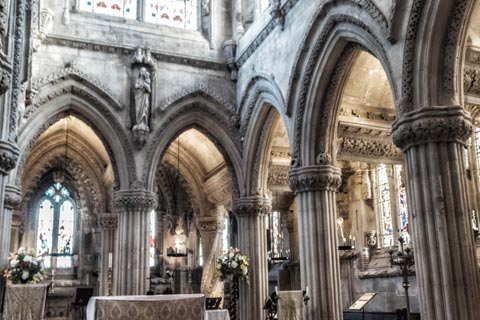 The chapel lay abandoned throughout the 17th and 18th centuries. It became a favourite haunt for poets and painters drawn to its magic and quiet mystery and was became a ‘must see’ on the mid-19th century Romantic Scottish tourist’s itinerary.

In 1862, the chapel was re-dedicated for Christian worship. It has been an active Episcopalian chapel ever since and belongs still to the same family for whom it was originally built.

The current owners are Peter St Clair-Erskine, the 7th Earl of Rosslyn, and his wife Lady Helen, the Countess of Rosslyn. Their daughter, actress Alice St Clair, played Kate Middleton in the 2011 American TV biopic ‘William and Catherine: A Royal Romance’.

Restoration of the chapel 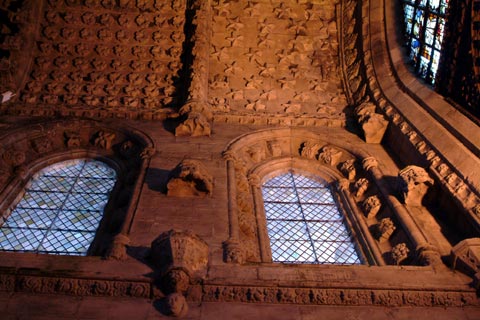 The Rosslyn Chapel trust, formed in 1995, oversees the conservation of the chapel. The only reason the building has survived through the centuries is that it is entirely made of stone, with no timber.

Ongoing restoration work (which began in the 1950s) focuses particularly on the Chapel’s roof and windows.

Condensation is the biggest problem: water has eroded some carvings, and allowed algae to grow on others. A sympathetic extension to the existing building has been created to house the visitor centre. 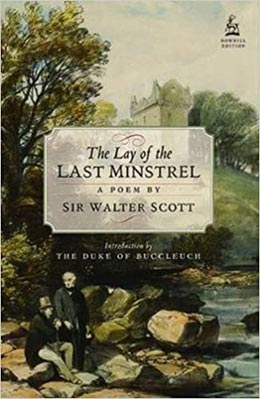 The present Countess of Rosslyn has collected many paintings of Rosslyn Chapel. A 2001 exhibition at the National Gallery of Scotland, ‘Rosslyn: Country of Painter and Poet’, documented the artists and writers who visited and were inspired by the Chapel.

Examples of such luminaries include Robert Burns, Alexander Naysmith, Queen Victoria, and William Wordsworth, who wrote a sonnet called ‘Composed in Rosslyn Chapel during a storm’.

In 1805, Sir Walter Scott wrote one of his most famous ballads (the Da Vinci Code of its day, we might say), ‘The Lay of the Last Minstrel’, about one of the Chapel’s most dramatic legends.

It is said that on the death of a St Clair, the chapel is seen to burst into flames, burning with a red glow. Such literary attention helped Rosslyn Chapel became a favourite destination for all visitors to Edinburgh, two hundred years before the Dan Brown effect.

‘When I decided to write The Da Vinci Code, I knew that its finale would have to take place at the most mysterious and magical chapel on earth — Rosslyn.’  Dan Brown

Entering Rosslyn Chapel, you are overwhelmed by the abundance of ornate carvings that cover every surface: biblical stories; angels playing the lute and the bagpipes; stars and flowers; doves and suns; and the figure of Christ. Indeed, some refer to Rosslyn Chapel as a ‘bible in stone’.

Stonemasons appear to have been free to also carve subjects from everyday life and belief into the stone of the Chapel. Some of its most famous and fascinating carvings, for instance, are the one hundred plus carvings of the ‘green man’: paganesque images of human faces with leaves growing out of their mouths, against a background of foliage. 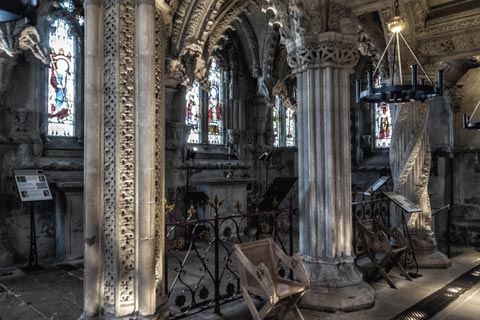 The presence of one of the corn carvings, which has been identified by botanists as Native American Indian Corn, is taken to suggest that one of William’s ancestor may have discovered America 100 years before Christopher Columbus! This plant was not known in Britain at the time of the building of the chapel.

The only inscription in the entire Chapel reads: ‘Wine is strong, the King is stronger, women are stronger still, but truth conquers all.’

A widely held belief links Rosslyn Chapel with Freemasonry. Certainly, the St Clair family had ties to Scottish Freemasonry. It is thought that the Chapel’s founder, Sir William, was granted the title of Grand Master of the Scottish Masons by King James II, and the title passed down.

Several masonic symbols, possibly dating from the 1860s, are carved into the Chapel’s walls but it is thought that these were added during restoration work done in the 1860s.

No wonder, then, that Rosslyn Chapel is considered to be one of Scotland’s most architecturally impressive buildings. Its exterior features honey stone, arched windows and delicate pillars. 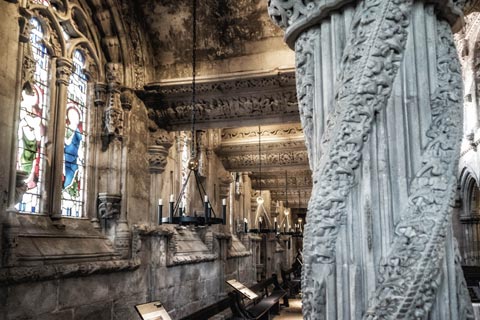 One of the Chapel’s most notable architectural features is the Apprentice Pillar, undoubtedly its most famous piece of sculpture.

The story attached to the Pillar is that the Chapel’s original master mason was reluctant to carve the pillar wanted by Sir William St Clair until he had visited Rome to see examples of the type of pillar he wanted to create.

In his master’s consequent absence, a young apprentice, inspired by a dream, carved the pillar we see today. Instead of being delighted, the master mason was overcome with jealous rage and killed the unfortunate apprentice. 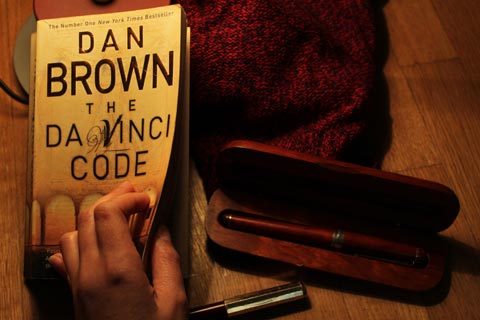 Rosslyn Chapel became known throughout the world after it was featured as a central narrative setting in Dan Brown’s 2003 global bestseller The Da Vinci Code, and the 2006 film adaptation starring Tom Hanks and Audrey Tautou.

International visitor numbers to the Chapel have shot up in the years since.

While not quite matching Tom Hanks’ global star power, William, the Chapel’s black-and-white cat, is a more local, feline celebrity associated with the building.

William the cat’s adventures feature in several children’s books, which you can buy (as well as a cuddly toy) in the Chapel gift shop.

What is buried under Rosslyn Chapel?

Rosslyn Chapel’s prominence within The Da Vinci Code is perhaps traceable to the popular theory that when King Philip of France persecuted the Knights Templar in 1307, a few Templars escaped to Scotland, and took refuge with the St Clairs at Roslin Castle.

It’s said that Sir William, when building Rosslyn Chapel over a century later, constructed a large underground vault to protect the Templar refugees’ mysterious treasure, said variously to be: the head of Christ; the Ark of the Covenant; the Holy Rood; the Holy Grail; and the lost scrolls from the Temple of Jerusalem. 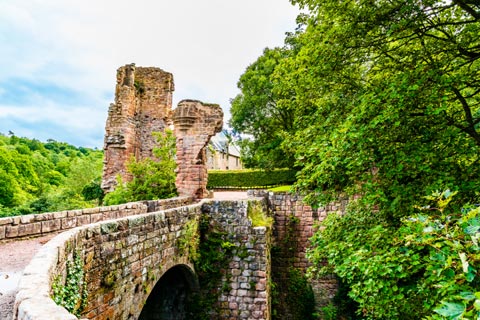 Just a short walk from the chapel this fortress was built in 14th and 15th century, by the members of the St Clair family – the 1st and 2nd Earls of Orkney. Now mostly ruined, the Rosslyn Chapel Trust is responsible for its upkeep. Part of the castle has been converted into holiday lets.

There’s not much of it left, but of course it has its own legend, of a sleeping lady who’ll wake up one day, reveal a buried treasure and make the castle rise from the ruins.

The village of Roslin grew to house the master craftsmen, artisans and builders who William brought over from Europe to build the chapel.  Sir William built houses for his stonemasons, and this is how the village came into being. 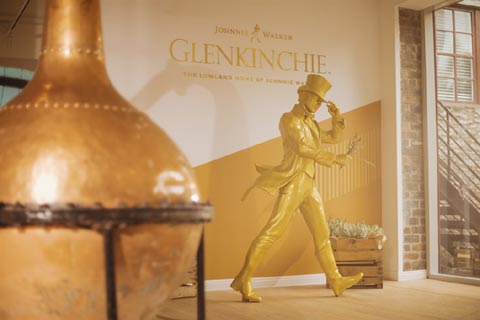 Located in the rolling farmlands of East Lothian pretty Glenkinchie Distillery has a multi-million pound visitor centre, centred around a beautifully landscaped garden.

The beauty of Roslin Glen has inspired artists such as JMW Turner, and writers such as Wordsworth and his sister Dorothy. It is home to the largest surviving stretch of ancient woodland in Midlothian.

It’s so easy to tour Rosslyn Chapel from Edinburgh as we offer a choice of two amazing itineraries. Combine Rosslyn Chapel with two of Scotland’s other iconic attractions Dunfermline Abbey and Stirling Castle on the In Quest of the Holy Grail tour.