There’s something magical about Scotland, but today we’re not talking about our stunning scenery, magnificent Munros or beautiful beaches. No, we’re talking about the mythical creatures that have long been associated with Scotland.

Settle in as we discover some of the fantastical beasts that call Scotland their home, either literally or metaphorically, and join us as we look on land and explore under the sea for the magic within. 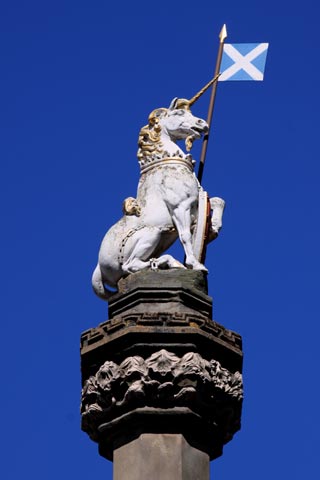 What mythical creature is the national animal of Scotland?

Whilst we try to always remain as objective as possible, when it comes to national animals, we think Scotland must have one of, if not the best animal out there! The magical and mythical unicorn takes the mantle of being the Scottish national animal, and when you look at what unicorns are said to represent, it’s easy to see why.

The unicorn is said to be strong, assertive and dominant, possibly reflecting history where the Scots demonstrated their ability to fight for what was theirs and what they believed in.

With unicorns being magical creatures, it would only be fitting to mention that it has also been said that a unicorn horn can make poisoned water pure again, resulting in a further link between unicorns and wholesomeness. Fitting if you ask us! 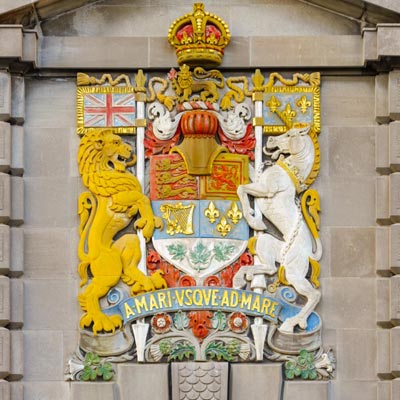 The first time the unicorn was showcased on the Scottish royal coat of arms was way back in the 12th century. Later, in the 17th century, two unicorns with a shield in the middle were used as the Royal Arms.

However, this all changed under the reign of James VI, with one unicorn giving way to the English national animal, the lion. This was a way of showing the unification of these countries, alongside James VI being given the title of James I of England and Ireland.

In fact, the dynamic duo of the unicorn and lion remain to this very day on the royal coat of arms of the United Kingdom. 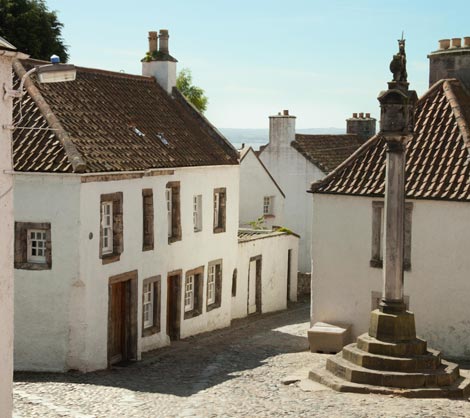 Where to see Unicorns

With such strong links between the unicorn and Scotland, it will be no surprise that there are multiple locations around the country where you can go “unicorn-spotting”. If your travels take you to the Palace of Holyroodhouse, Stirling Castle, University of St Andrews or Edinburgh Castle, don’t forget to seek out their famous unicorns. Many towns and villages have a market cross, also known as a mercat cross. It marked the location of the local market in the olden days and many are topped with a unicorn.

One last top tip before we move on… National Unicorn Day is celebrated each year on the 9th of April – if there was ever a day to make your way to Scotland, this is it!

From unicorns to the equally magical and mythical (for different reasons!) Calanais Standing Stones. Before we begin, we know that some of you may be more familiar with the term Callanish Standing Stones. Both titles refer to the same Neolithic monument, the latter being the English term and the former the Gaelic pronunciation. 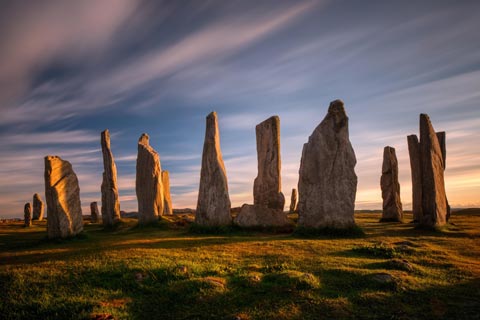 The Calanais Standing Stones are one of the mysteries of Scotland – it’s not clear as to exactly why they were constructed in the way they are, although one of the most popular theories suggests it was due to some kind of astronomical ritual.

Where are the Calanais Standing Stones?

What we know for sure about these stones is that they can be found on the west coast of Lewis in the Outer Hebrides. This monument is 5000 years old, making it older than Stonehenge, another stone formation shrouded in mystery.

There’s also one thing we can guarantee without a doubt – the views you get from the Calanais Standing Stones are truly remarkable! 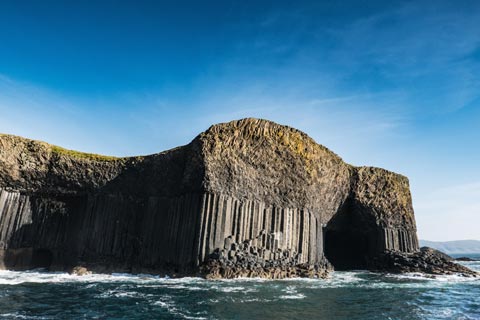 It’s none other than Fingal’s Cave which can be found on the Isle of Staffa, part of the Inner Hebrides… but wait, we’re getting ahead of ourselves, so let’s start at the beginning – which happens to be 60 million years ago! 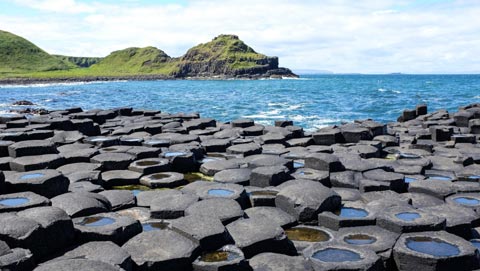 It’s said that the lava flow created many years ago was responsible for forming this sea cave, along with the Giant’s Causeway over the sea in Ireland.

As the Giant’s Causeway exhibits a similar structure, it was thought that Fingal’s Cave and the Giant’s Causeway were two ends of the same road, built to facilitate the fight of two giants (literally!) – Irish Fionn mac Cumhaill and Scottish Fingal. That would have been a battle of epic proportions, we imagine!

There is no better example of the phrase “a picture speaks a thousand words” than Fingal’s Cave. The basalt pillars that create this cave structure are often hexagonal, all the more remarkable considering that this is all-natural – no special effects or help from man is required here! 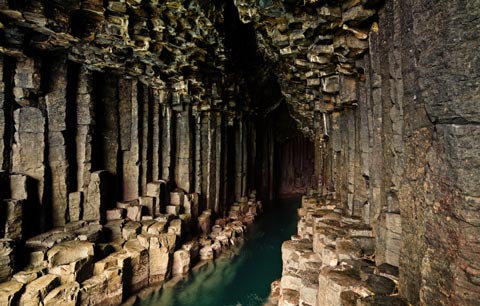 The beauty of Fingal’s Cave has long been recognised, being visited by Queen Victoria and poet William Wordsworth, inspiring artists like J.M.W. Turner and even composers and musicians like Jakob Ludwig Felix Mendelssohn and Pink Floyd respectively.

Mendelssohn was so taken with Fingal’s Cave and the harmonious acoustics offered by the cave echoes that he was inspired to compose the Hebrides Overture.

The story of the Selkies is both magical and haunting all at the same time. A selkie is a creature that can morph from being a seal to a human – all they need to do is shed their seal skin to become human and enable them to come onshore. 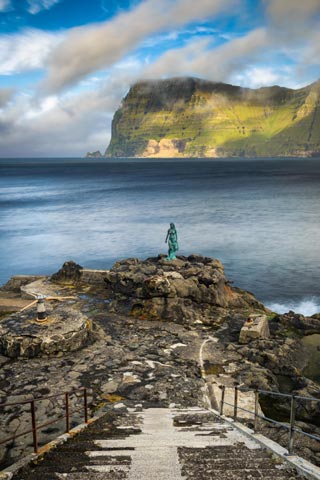 Closely tied in with the Orkney Islands (the word “selkie” is said to mean seal in the dialect spoken on the island), there’s even been talk of Orcadian children presenting with “selkie features”, with webbing in between their fingers and toes. The selkie story also features further afield, such as across the water in Ireland and Iceland.

So what actually is The Selkie Story? As is often the case with Scottish folklore, if you look up the term “selkie”, you’ll probably end up with more information than you can handle! Of the many different stories in circulation, the one we keep coming across is of the selkie woman who shed her skin which was then lost/stolen (depending on which version you read), meaning she was unable to return to the sea as a seal.

The woman then ends up marrying and having children in her human form, who end up finding her lost/stolen seal skin and give it back to her.

A fantastical and mythical tale, The Selkie Story is one we imagine will remain a part of Scottish legend for years to come. 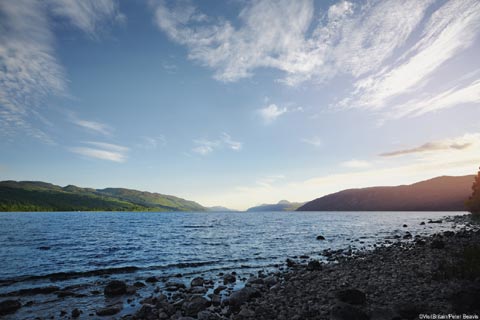 We couldn’t end our exploration of all things mythical here in Scotland with anything other than one of the most well-known and celebrated creatures of all time – the Loch Ness Monster, affectionately known as Nessie.

Sightings of the Loch Ness Monster go back many years, with St Columba reporting as far back as 565 AD. Loch Ness is over 800 feet in depth, so we can’t think of more suitable Scottish waters to play home to a sea monster! 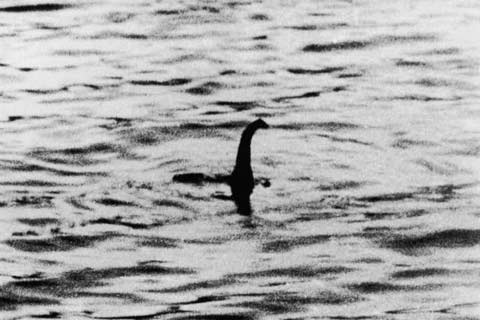 Whilst Nessie has been spotted on several occasions, an eyewitness account in 1933 followed by a photo being released in 1934 really helped secure the presence of Nessie here in Scotland.

After the 1933 sightings, a hunter called Marmaduke Wetherell was enlisted to help find Nessie. Although it appeared he had struck gold when he came across some big footprints, they were later revealed to have been a prank.

One year later, a photo was then released by Robert Kenneth Wilson, who was a surgeon purporting to have photographic evidence of none other than Nessie herself! The picture showed Nessie to resemble, for want of a better term, a sea reptile and put her firmly on the map.

Unfortunately, just like the footprints, the photograph was revealed to be fabricated… several years later, in 1994! The image of the Loch Ness Monster was nothing more than a toy, with the whole situation set up by none other than Marmaduke Wetherell himself – he felt the photo would have more credence coming from someone from a professional capacity such as Wilson. It turns out that for decades he was right!

To this day, the search for Nessie continues. Just a few years ago, in 2018, modern technology was brought in in a bid to see what really lies within Loch Ness. The DNA contained within the loch was analysed, and whilst nothing of note was revealed, the outcome was indicative of eels living in Loch Ness - so could Nessie be a giant eel?

Discover the mysteries of Scotland with Scottish Tours

Our driver/guides are storytelling masters. Sit back and relax as you hear tales of our real and mythical heroes as you gaze at the spectacular scenery that makes Scotland so extraordinary.