What to see on Orkney

The allure of these islands attracts visitors from far and wide. Wondering what to see on Orkney? Let Scottish Tours help you with this helpful guide.

Known as the Northern Isles, the Orkneys lie around 10 miles (16km) north of the Scottish mainland across a strait known as the Pentland Firth. 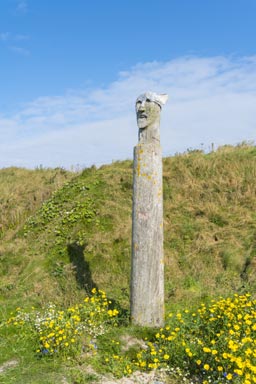 Around 20 islands are inhabited, having first been colonised around 6,700 BC. During Neolithic times, the islands saw the building of impressive stone circles and prehistoric homes. Later, the early Scots, known as Picts, became farmers and fishermen. To protect themselves, defensive brochs were built, which were occupied for 100s of years.

For around two centuries, the islands became Viking property, and the influence of the Norse culture can still be felt today. In 1468 the islands transferred to the Scottish Crown as part of a wedding dowry. This resulted in the islanders being ruled by stewards, some of whom were tyrannical.

The position of the Orkney’s as a gateway to the Atlantic Ocean resulted in these islands serving as a major naval base during both World Wars. The extensive natural harbour of Scapa Flow was the scene of significant events during both conflicts.

There is much to explore in the Orkney Islands. From prehistoric history to breathtaking beaches and soaring cliffs to famous World War sites. There’s abundant wildlife, of course, and plenty of diversions for food and drink lovers too.

Let’s have a look at some of the top attractions these unique islands have to offer.

Four of Orkney’s most significant ancient monuments were entered on the UNESCO World Heritage List in 1999. Known as the “Heart of Neolithic Orkney”, they sit alongside the Pyramids of Giza and the Great Wall of China in being recognised for their importance to World humanity. 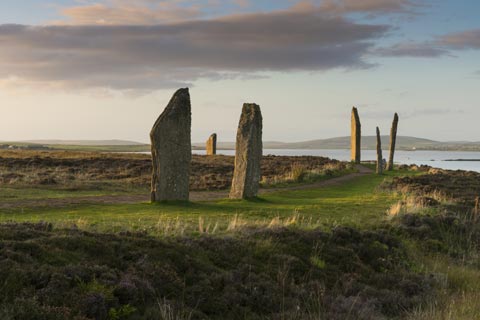 This enigmatic circle of standing stones are thought to have been built between 2600 and 2400 BC. Originally there were 60 stones, but 36 have survived, making it one of the best-preserved in mainland Britain.

It’s thought the circle was used for rituals and ceremonies and is carefully positioned on a narrow strip of land between the Lochs of Stenness and Harray.

This well-preserved village offers the chance to see Neolithic houses complete with their stone furniture. The homes were interconnected by a covered passageway, and it’s thought the complex may have included a workshop.

Covered by layers of sand for over 4,000 years, this Neolithic treasure was uncovered after a ferocious storm in 1850. The revealed remains give us incredible insight into how our ancestors lived their lives at this remote location.

At the visitor centre, you can see jewellery and artefacts recovered from the site. 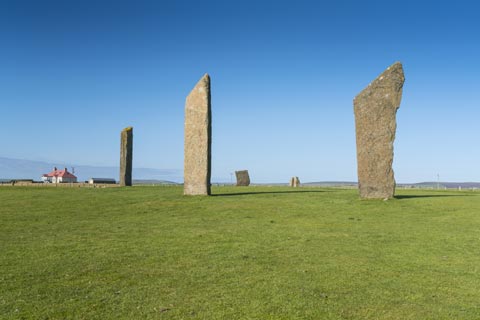 Modern carbon-dating techniques date the building of this stone circle to between 3,100 and 2,900 BC making it, probably, the oldest henge in Great Britain. Even earlier than Stonehenge!

Originally twelve massive monoliths circled a large hearth which was thought to have been used as a ceremonial site. Today only four upright stones remain towering up to 6m high.

Although it can’t be seen today, the stones would have been encircled by a wide ditch which may have been filled with water to create a moat.

If you found Skara Brae and the stone circles impressive, prepare to be wowed by Maeshowe! This 5,000-year-old chambered tomb was built in perfect alignment so that when the midwinter sun is setting, it illuminates the entrance passageway. 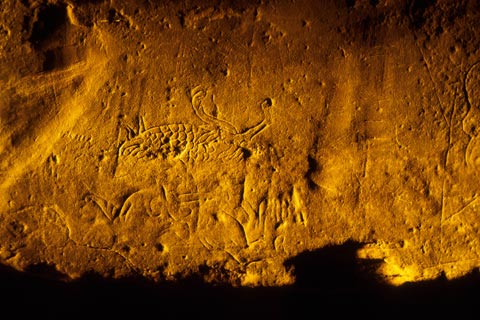 Outside, Maeshowe looks like a simple grassy mound, but it disguises what experts consider one of the finest Neolithic buildings in Europe.

The interior of the tomb was built using massive stones that are slotted together in a lego-like style. The entryway is 10m long which leads into the central chamber. It’s hard to think that such an impressive building could have been built without access to modern tools and lifting equipment.

In the twelfth Century, Norsemen who were descendants of the Vikings broke into the tomb and left graffiti over the tomb’s walls. These remarkable runic carvings are thought to be the finest examples to survive outside Scandinavia. 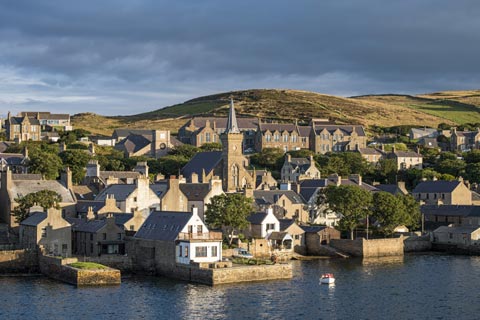 The main town of Mainland Orkney is Kirkwall. It’s built on the site of a Viking trading post which was established around 1035 by Earl Rognvald Brusison.

The town got its name after a church was built here, dedicated to St Olaf, the patron saint of Norway. The community was called Kirkjuvagr in Norse, which means “Church Bay”.

Things to see in Kirkwall

This bustling town has a distinct feel all of its own. Take a wander along the medieval paved streets to find a wealth of craft shops and independent traders.

The bustling harbour is home to a working fleet of fishing boats and the central hub for the inter-island ferry network.

This impressive building has dominated Kirkwall since the 1100s. To discover why such a splendid building was constructed here, we need to go back in time. 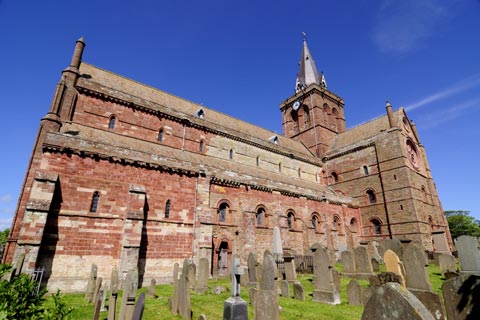 At the time of the Norse occupation, Orkney was the seat of a powerful Earldom. In 1103 two cousins became the joint Earl. Magnus Erlendson and Haakon Paulson. At the start, everything went well, but by 1116 some serious disputes had arisen between them.

The two cousins met on the island of Egilsay to bring an end to their disagreements. Haakon was in no mood to compromise, and Magnus was killed. On his death, prayers were said in his name, and suddenly strange things started to happen, including claims of miracles and inexplicable cures.

In 1135 Magnus’ nephew, Rognvald Kolson, had become the Earl, and he vowed to build a stone church dedicated to “Earl Magnus the Holy”. 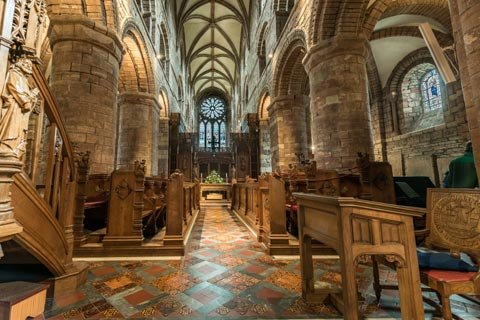 Work started on building the Cathedral in 1137, and construction lasted around 300 years. It’s constructed using red sandstone said to have come from a nearby quarry.

St Magnus is buried in the Cathedral alongside the remains of St Rognvald.

While many cathedrals in Scotland were destroyed during The Reformation. St Magnus was spared, although the organ and treasures were removed and the walls whitewashed.

In 1845 the Government took control of the building and started a programme of restoration. There was further rebuilding between 1913 and 1930 when the tall steeple was constructed and stained glass windows replaced.

Close to the Cathedral sits the Bishops Palace, probably built by Bishop William the Old in the mid-1th Century. It was built at the same time his friend Earl Rognvald was building St Magnus Cathedral.

Now essentially ruined, King Haakon of Norway died here in 1263 after being wounded in the Battle of Largs. 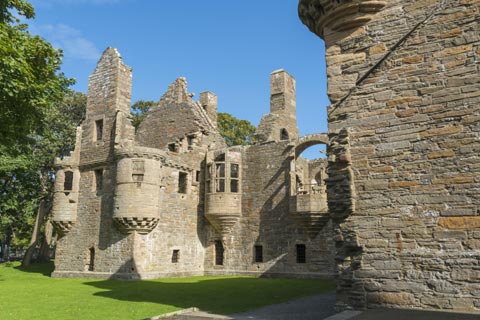 The notorious Earl Patrick Stewart had the Earls Palace built around 1606. It is said that this fine Renaissance-style building was constructed using slave labour.

The Earl ruled Orkney for 23 years with an iron fist. He was so unpopular it is said he needed 50 bodyguards to protect him.

On the lower level are large store-rooms and a massive kitchen. Climbing the ornate staircase leads the main hall as well as the Earl’s bed-chamber.

Known as Fortress Orkney, these islands played a crucial role in both World Wars. Evidence of the island defences can be found at the Ness Battery, which guarded the entrance to Skapa Flow and today’s Kirkwall Airport, which started life as an RAF base.

During World War I Scapa Flow was an active naval base, but the most dramatic event occurred after the war in June 1919. The captured German fleet of 52 warships was gathered at Scapa Flow while the allies worked out what would happen to them.

As time dragged on and no decision was made, the German crews scuttled their own ships in a final act of defiance under the orders of Admiral Ludwig van Reuter. 52 ships sank to the seabed, and 9 German sailors were killed. 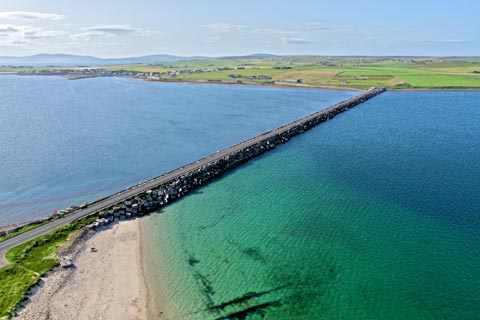 During the 1920s and 1930s, most ships were raised and broken up, but seven wrecks remain and have been protected as scheduled monuments.

Due to its remote location, Scapa Flow was chosen as a naval base during the Second World War. Many of the defences that were built during WW1 needed repair so the anchorage wasn’t as well protected as it should have been.

A German U Boat entered the harbour in October 1939, which attacked and sank HMS Royal Oak with the loss of 833 lives.

Following the loss of Royal Oak, a series of four barriers were built to block the eastern approaches to Scapa Flow. They took four years to construct, and the work was undertaken mainly by Italian Prisoners of War.

The barriers now act as causeways carrying traffic between the islands. 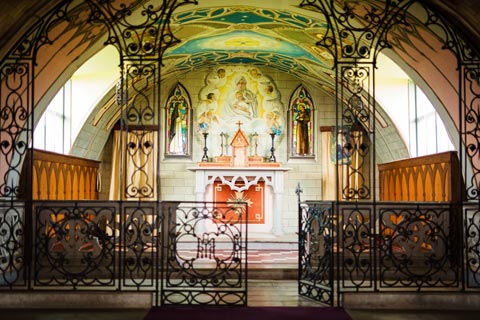 The Italian Prisoners of War who were working on the Churchill Barriers were accommodated in two camps. They requested that they be allocated somewhere to worship and two Nissen huts were given to provide a make-shift chapel.

One of the prisoners, Domenico Chiocchetti was an artist and together with other tradesmen, they were given the task of transforming the huts into a chapel.

Using a prayer card given to him by his mother before he left Italy, Chiocchetti painted the altarpiece. With his talents recognised by the Camp Commander, he was allowed to continue creating the spectacular interior we see today.

As the Scottish tour specialists, we make it super easy to visit Scotland’s Islands. Discover all that Orkney has to offer on our Orkney Island tours from Edinburgh.

If you have a little more time, you can combine the Orkney and Shetland islands in one spectacular package.

From Inverness, you can enjoy the highlights on one of our popular Orkney day tours. Got a little bit more time? We have a choice of 3-day short breaks available, which include a two-night stay in Kirkwall.