As Scotland's tourist industry emerges from lockdown, we take a look back through our archives to discover the story behind Scottish Motor Traction (SMT). This organisation played an essential role in the development of Scotland's tourism industry through much of the 20th Century.

It's a fascinating story of visionary managers and heroic drivers who took adventurous tourists to the wild and untamed Scottish Highlands and Islands. Over the years the road network has improved dramatically, but the spectacular scenery that inspired those early travellers remains unchanged.

Our story starts on New Years Day 1906 when a group of hardy passengers boarded a "horseless" bus for a thrilling 8-mile ride to Corstorphine, at that time a village on the outskirts of Edinburgh.

Later that year a second route was started to South Queensferry. It proved to be very successful as day-trippers flocked to this pleasant town on the Forth Estuary to view the magnificent Forth Bridge. At that time the bridge was just 16 years old and was considered to be the "Eighth Wonder of the World". 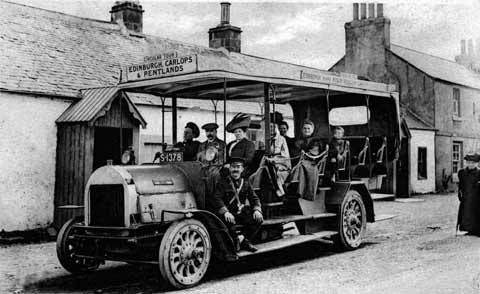 In August 1907 the first of a series of circular tours was operated. The 32-mile route (51.5 km) was operated twice daily and covered Liberton, Roslin (with a stop to visit Rosslyn Chapel), Penicuik and Carlops. This tour was operated by an open-sided charabanc which offered no protection to the passengers from the famously changeable Scottish weather.

Unhappy with the reliability of the buses available at the time, SMT decided to design and build their own vehicles. Introduced in 1912 and called "The Lothian", these modern buses that boasted features such as comfortable leather seats and electric lighting. A charabanc version was introduced in 1914 for a new all-day tour to the Scottish Border country. 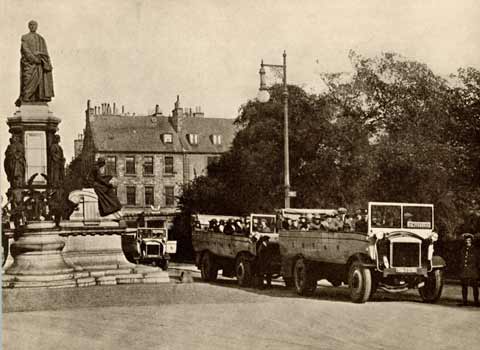 When the First World War ended in 1918, the company restarted the tour programme the following year with a relatively cautious programme of excursions. In 1920 two new tours were introduced including one that visited Stirling and included a cruise on the River Forth aboard the company's own yacht Electric Arc.

The next year a tour through The Trossachs region was offered using a purpose-built Fiat 14-seater fitted with pneumatic tyres for ultimate passenger comfort. This tour has remained a firm favourite throughout the decades and is still a popular choice today. 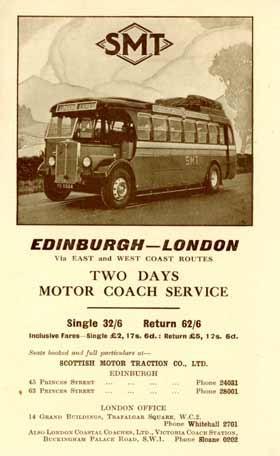 An exciting development took place in 1930 when the two-day London service commenced. The overnight service operated via the West Coast route with an overnight stay in Chester or by the East Coast staying in York en-route.

A number of stops were made at popular tourist destinations en-route including the Lake District, Stratford-upon-Avon and Oxford on the West Coast Route and Cambridge, Doncaster and Durham on the East Coast journeys.

This service proved to be very successful and continued in various forms until 1988. Linking with the company's expanding programme of Scotland tours from Edinburgh, it provided a wide range of holidays for customers living in the London area.

In 1931 the first programme of multi-day tours was introduced. A wide range of Scotland Tours were featured, of course, with destinations including the North West Highlands, John O'Groats, Mull and Skye. 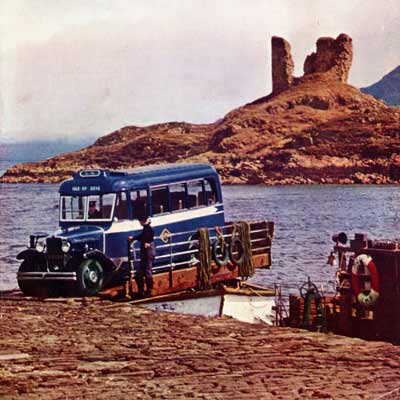 This programme of tours was genuinely pioneering in style and spirit. Without the modern road network that we take for granted today, touring through the Scottish Highlands could be a rather arduous and daunting affair.

Like now, a popular destination was the Isle of Skye. In the early days to reach the island coaches had to be driven across narrow planks to board the small ferry for the crossing.

It wasn't just Scotland that featured in the programme. There were tours to England and Wales too, including the Lake District, Wye Valley and Yorkshire Dales. The most impressive was a 13-day tour to Devon and Cornwall, an epic journey of more than 1,200 miles in the days before motorways! 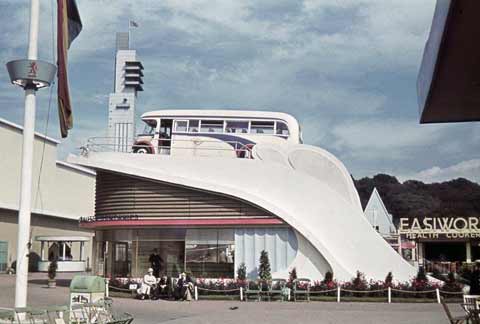 In 1938 an international exposition took place in Glasgow's Bellahouston Park. It was opened by King George VI and Queen Mary at a ceremony in Ibrox Stadium. Some 12.8 million people visited the exhibition which was designed to promote trade between the countries of the British Empire and to showcase the best of Scotland.

Alongside exotic pavilions promoting far-away lands such as Canada, Australia and New Zealand SMT had its own display hall promoting the tours and services offered by the company and even sporting a real-life Leyland coach on the roof.

Sadly, the outbreak of World War 2 in September 1939 brought the tour programme to a sudden end. 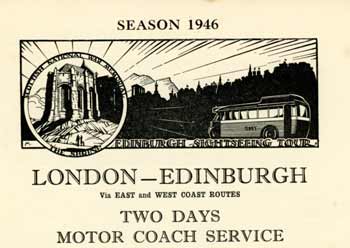 The post-war years brought significant change when Scottish Motor Traction was nationalised in 1948. Under State control, the company was renamed as Scottish Omnibuses. 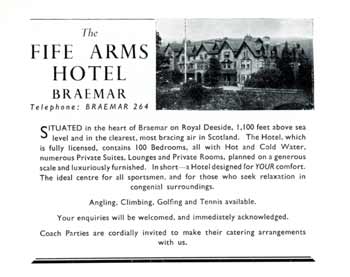 Despite difficulties caused by rationing and vehicle shortages, the tour programme was operated in the 1946 season. The company expanded the range of tours offered during the 1950s and with car ownership being low these were, without doubt, the halcyon days for coach touring.

One of the attractions of taking a Scottish Omnibuses tour was the all-inclusive prices. In 1950, for a fare of £12.00, passengers could join the five-day Glencoe, Loch Maree and North West Highlands tour.

Along the way, they would enjoy a 3-course lunch and afternoon tea daily, plus dinner bed and breakfast for four nights. As now, only the best hotels were selected to accommodate the tour passengers. 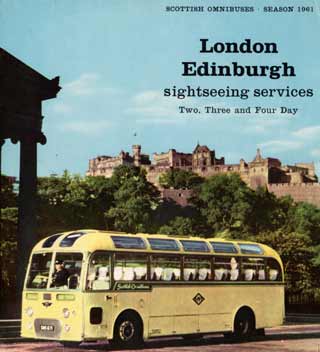 1960 brought a new decade and new tours from London. The previous year a fleet of attractive touring coaches was delivered. Dubbed the "two-day" fleet they had distinctive glass roofs making them ideal for sightseeing.

The new coaches were used to expand the London to Edinburgh sightseeing service with new 3 and 4 day itineraries being introduced. These could be enjoyed as a round-trip in either direction or combined with free time in Edinburgh or a tour of Scotland.

The increase in air travel made Scotland an attractive holiday destination for overseas visitors, to service these customers a new booking office was opened in Regent Street, London.

In 1964 the company introduced a new brand name of Eastern Scottish, to better describe the operational area of the day-to-day bus services. 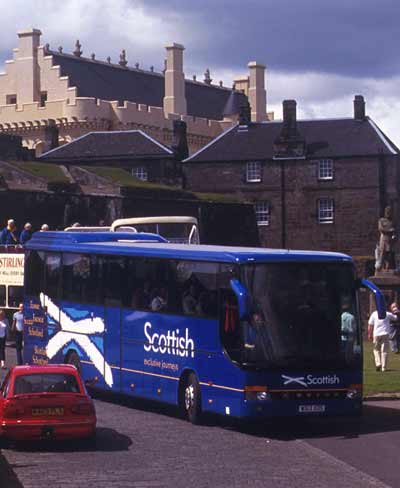 With the increasing car ownership and the introduction of package holidays in the 1960s and 70s demand for coach touring holidays from the local population was on the wane. There was, however, increasing interest from overseas visitors so to develop this trade business links were established with sales agents throughout the World.

In the early 1980s, the Thatcher Government announced that the Scottish Bus Group, as the organisation was now known, would be privatised. In preparation, the operation of the extended tours programme was moved to a new company called Scottish Citylink Coaches, who marked the tours under the brand name "Clansman Monarch". This continued for several years, through various owners, until it was closed down in 2003.

The day trip programme remained with Eastern Scottish which was subsequently bought by First Group following a management buyout. In 1999 Scottish Tours was established to take over the day tour programme. With new branding and modern coaches, the operation was expanded to include destinations such as Loch Lomond, Loch Ness and Oban. Just like the early days each tour is led by an experienced tour guide.

In 2010 the company expanded to offer tours and holidays operated by carefully selected partners.

Discover the best Scotland has to offer with Scottish Tours

Explore our website to find one of the largest selections of Scotland tours available. We are proud of our history and heritage. Today we continue to provide the very best value, choice and experience.