In Scotland, we are very proud of our fellow countrymen who, through their inventions and academic endeavours, have changed the way we live our lives today.

Here we have listed some of Scotlands’ most famous sons and daughters.

The son of a Helensburgh minister studied electrical engineering at Glasgow University. Unable to hold down conventional employment, he became a full-time inventor. In 1925 he transmitted the first television picture and later established the first TV station. Providing services to the BBC his company produced the first sight and sound broadcast and, subsequently, an outside broadcast of the 1931 Derby.

Bell - Alexander Graham (1847-1922) - Inventor of the telephone and involved in genetics and phonetics.

Born in Edinburgh and educated at Edinburgh University he emigrated to Canada in 1870 and the USA the following year. He became a Professor in Boston in the early 1870s and worked trying to develop a machine that would assist deaf people with their hearing. This research led him to develop the telephone which was patented just days before his rivals. The first call was made on 10 March 1876. The Bell Telephone Company has formed in 1877 making Bell a fortune from its work.

Brewster - Sir David (1781-1868) - Invented the kaleidoscope and the lenticular stereoscope.

The colourful cabinet-maker and city councillor presented a respectable image by day but had a secret night-time career as a housebreaker. Using his day-job as cover, he was able to copy keys and discover the security arrangements of his victims. He used his ill-gotten gains to finance his extensive gambling habit.

After a bungled raid in 1788, he fled to The Netherlands but was arrested and extradited back to Edinburgh where he faced trial and was found guilty. He was hanged at the Old Tolbooth in Edinburgh in front of a massive crowd. 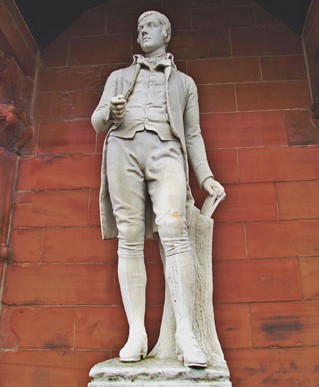 Robert Burns was born in Alloway in 1759 and was the oldest of seven children. As he grew up, Burns began to take an interest in folk tales and songs. By 1786 he had inherited the family farm and was in financial difficulties. To raise funds a book, “Poems, Chiefly in the Scottish Dialect”, was published which was critically acclaimed. He moved to Edinburgh, where he became famous as the “Ploughman Poet” and toured the country giving recitals. In 1789 Burns moved to Dumfries to become an exciseman. It was here that he died, aged just 37 years old.

In his short life, Robert Burns penned beautiful love songs including “Ae Fond Kiss”, “A Red, Red Rose” while “A Man’s a Man for A’ That” exemplifies his interest in humanity. His most famous song is undoubtedly “For Auld Lang Syne” which has been sung throughout the World at New Year for over two centuries

In celebration of his life and work,  Burns Suppers take place throughout Scotland and beyond on the date of his birth, 25 January. 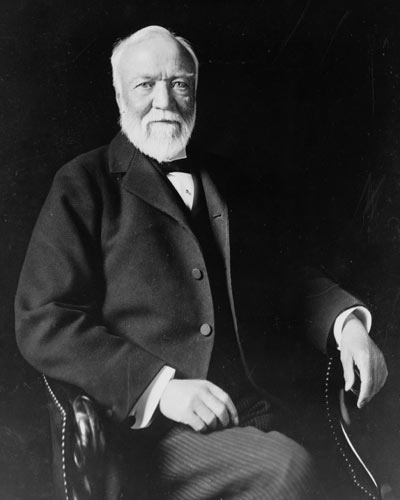 This rags to riches story starts in Dunfermline in 1835 when Andrew Carnegie was born, the son of a linen weaver. In 1848 the family moved to the USA, and Carnegie joined the Pennsylvania Railroad as a clerk. He rose to gain a top position within the company during its expansion, particularly during the Civil War and became a millionaire by the time he was 30.

As well as the railway he invested in steel and iron, and by the 1800’s he was the undisputed leader in these industries. By 1900 Carnegie had decided he should stop earning money and start spending for the benefit of others. He is famous for the chain of 2,500 public libraries he created throughout Britain and the USA. He also donated to the four ancient Scottish Universities, despite not having a formal education, and to his hometown of Dunfermline.

Scotland’s favourite James Bond? Most likely! Thomas Sean Connery was born in Edinburgh in 1930 and had a wide range of jobs including milkman, coffin polisher and lifeguard. After moving to London, he had his break in 1962 when he was cast as secret agent James Bond in “Dr No”. Connery starred in a total of seven James Bond films as well as many other movies including “Murder on the Orient Express” and “Indiana Jones and the Last Crusade”.

Connolly - Billy (1942 - ) - The shipyard worker who became an international actor and comedian.

Cranston - Kate (1850-1934) - An entrepreneur who encouraged the artistic talents of Charles Rennie Mackintosh.

This successful industrialist used his sense of social responsibility to establish, New Lanark village in 1786. The flowing waters of the Falls of Clyde powered the mills which, at its peak employed over 1,300 workers. Dale was known as a compassionate employer who provided housing, schools and welfare facilities for his staff.

Dewar - Donald (1937-2000) - Architect of the new Scottish Parliament and its first First Minister. 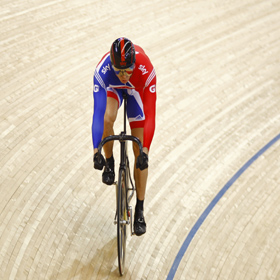 Born in Edinburgh Chris Hoy was inspired to cycle by the bicycle scene in the 1982 movie “ET”. He is Scotland’s most successful Olympian having won three gold medals at the Bejing Olympic Games in 2008. The Velodrome at the Emirates Arena in Glasgow is named in his honour.

MacDonald - Flora (1725-1790) - Her bravery helped save Bonnie Prince Charlie after the defeat at Culloden. 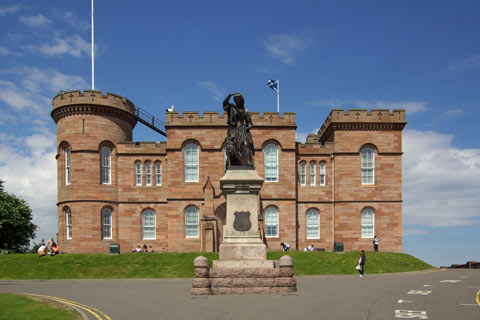 Born on the Hebridean island of South Uist in 1725 she famously sailed Bonnie Prince Charlie from Benbecula “over the sea to Skye” dressed as her maid, Betty Burke. The Prince was a fugitive after the Battle of Culloden in 1746 and had a bounty of £30,000 on his head.

After his successful escape, MacDonald was subsequently arrested and detained in the Tower of London. On her release, she married and emigrated to North Carolina. The family later returned to Scotland and lived quietly until her death in 1790. She is buried on the Isle of Skye wrapped in a sheet on which Bonnie Prince Charlie had slept.

Discover more about the Jacobites by following this link: https://www.nts.org.uk/what-we-do/history/jacobites 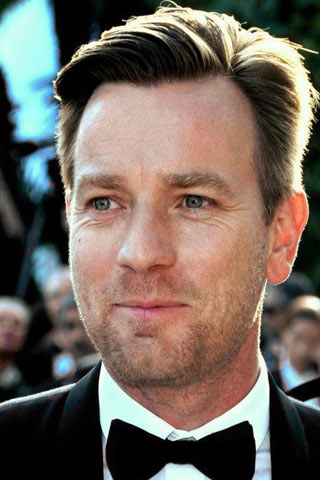 This Holywood A-list actor was born in Perth and grew up in Crieff. After a number of TV roles, he made his film debut in “Being Human”. He gained international fame after playing the heroin addict, Mark Renton, in “Trainspotting”, a role he reprised in the 2017 sequel, “T2 Trainspotting”.

Other notable roles during his career include playing the young Obi-Wan Kenobi in the “Star Wars” prequel trilogy; the young poet, Christian in “Moulin Rouge” and Sky Masterson in a London revival of “Guys and Dolls”.

Macintosh - Charles (1766-1843) - His invention of waterproof clothing added his name to the English dictionary.

One of Scotland’s most romantic figures Mary was born at Linlithgow Palace in 1542 and became Queen when she was just six days old and crowned a few months later. She spent her early years in France where she married the Dauphin of France in1558. On the death of the French King in 1560 she returned to Scotland where she found herself the victim of opposing factions trying to use her patronage for their own ends.

Follow this link for the full story of Mary, Queen of Scots tragic life: https://www.royal.uk/mary-queen-scots-r1542-1567

Born in Glasgow in 1987 Andy played his first competitive tournament at five years of age. After moving to Dunblane he pursued his tennis career turning professional in 2005. He won a gold medal at the London Olympic Games in 2012 and the Wimbledon Championship the following year - the first Scot to do so since 1896. In 2016 he repeated his success at the Wimbledon Championships and won a further two Olympic gold medals at the Rio Games.

Paterson - William (1658-1719) - Founder of the Bank of England and organiser of the ill-fated Darien Scheme. 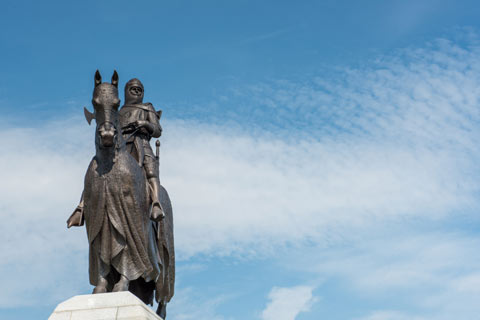 One of Scotland’s greatest freedom fighters Bruce became King in 1306 which incurred thewrath of King Edward I of England who forced him into hiding. While sheltering in a cave,he watched a spider struggling again and again to build a web. Inspired by the spider's efforts Bruce started a guerrilla campaign to gain Scotland’s independence.

In 1314 his army met the much stronger English forces of King Edward II at Bannockburn.The Scots were victorious, and the country’s independence was secured. Bruce reigned as King of Scotland until his death in 1329. He is buried at Dunfermline Abbey, and his heart is interred at Melrose Abbey. 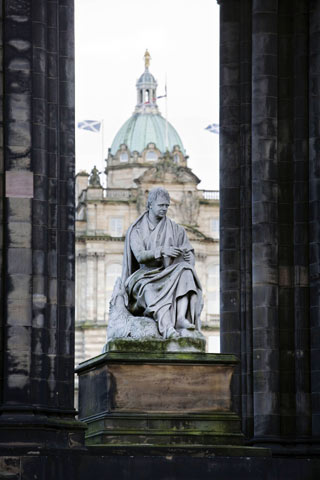 Born in Edinburgh Sir Walter Scott was the ninth child of a lawyer. After studying at Edinburgh University, he left to pursue a legal career but was also an enthusiastic poet and author. Through his work and hobby, he amassed enough money to buy his home on the banks of the River Tweed, Abbotsford.

He published the Waverley series of novels in the 1820s which started the Scottish tourism industry as readers flocked to see the places that Scott described so eloquently in his books. In 1822 Scott was mostly responsible for making the arrangements for King George IV’s visit to Scotland which signalled the restoration of Tartan as Highland wear as it was banned after the 1746 Jacobite uprising. Sir Walter Scott died in 1832 and is buried at Dryburgh Abbey. 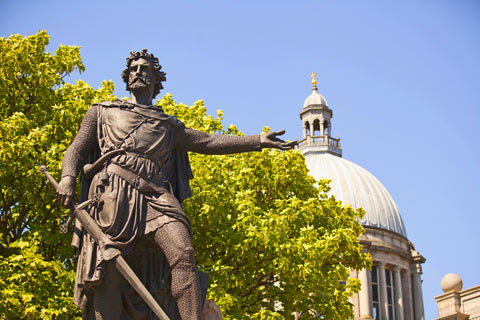 One of Scotland’s most celebrated patriots, he led his army to a famous victory at the Battle of Stirling Bridge in 1297. He became Guardian of Scotland and mounted raids on Northern England, capturing Berwick. His success encouraged many of his countrymen to the independence cause. The following year he met the English forces at Falkirk but was defeated this time.

Wallace fled to France to try to gain support from the French King, but on his return, he was betrayed and captured. After a show trial, Wallace suffered a barbaric execution. Click on this link to discover more about William Wallace.

Watt - James (1736-1819) - His development of the steam engine was the springboard for the Industrial Revolution.