Where to go dolphin spotting near Inverness

Visit the Black Isle, just across the Moray Firth from Inverness, to experience one of the best places in Europe to shore watch dolphins. It’s thought that the Moray Firth bottlenose dolphin population is around 200 making this group the most northerly in the World. 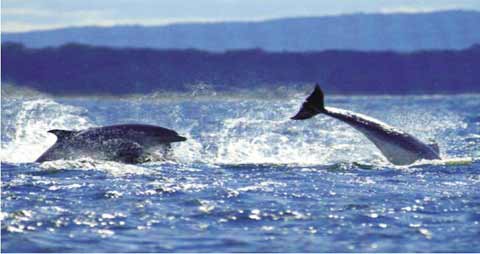 These popular streamlined mammals can be found in most of the World’s oceans and are known officially by their Latin name of Tursiops Truncatus.

Bottlenose dolphins can grow up to 4m long and can be identified by their large dorsal fin and distinctive bottlenose snout. These playful creatures will often breach and ride the wake of boats and ships.

These sociable mammals live in groups called pods, which can be made up of hundreds of individual animals. They sometimes hunt in groups too. The bottlenose dolphin lifespan can be as much as 40 years of age

What do Bottlenose Dolphins eat? 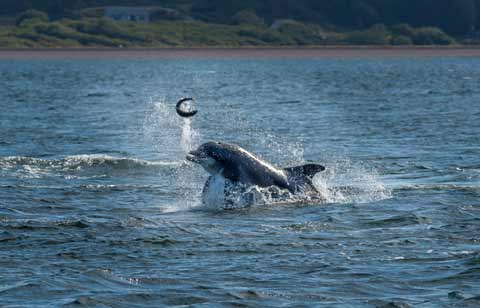 Dolphins feed on a selection of food including fish, squid and crustaceans, such as crabs and prawns. They can use different techniques for catching their prey, depending on whether they are hunting alone or as part of a group.

By making a clicking sound and processing the returning echo, they can work out the shape, size and speed of objects that are in the water. Acting with other dolphins, they can herd fish together then take turns to charge through the school to feed.

Where to see dolphins near Inverness

As we’ve said, the most northerly pod of Bottlenose Dolphins can be found in the Moray Firth making it easy to go dolphin-spotting from Inverness. You can travel on your own, but many people find it much easier to join a tour or cruise. If time is short, you can head to the Inverness Marina to hop aboard the Dolphin Spirit for a 75-minute dolphin watching Moray Firth boat trip. A trained guide accompanies each cruise telling you about the dolphins and other wildlife that can be spotted.

If you are an adrenaline junkie, the Mischief Fast Rib operates during the summer months. In two hours you’ll be whisked up the Moray Firth where there is the chance to view seals and harbour porpoises, as well as dolphins, of course. If you are very lucky you might even spot a Minke Whale!

North of Inverness, across the Kessock Bridge, is the Black Isle, a peninsula which boasts attractive villages, historical gems and abundant wildlife. Dolphin-spotters make a bee-line to Chanonry Point, which sits between the communities of Fortrose and Rosemarkie.

The promontory here, combined with that at Fort George, on the Moray Coast narrows the Moray Firth considerably. This creates the ideal viewing place to watch the dolphins, which can be incredibly close, often just a few metres away.

Dolphin sightings here are dictated by tidal conditions, with the best time being on a rising tide. If you plan to make the journey, it’s advisable to check the tidal tables to get the best chance of a sighting. Hopefully, the dolphins realised that you travelled all the way to Chanonry to see them and they put on a spectacular show, just for you! Now you are in the Black Isle, wouldn’t it be a good idea to see more of this un-spoilt part of Scotland?

The attractive landscape is made up of woodland and farmland, with beautiful sea views and picturesque villages to discover.

How did the Black Isle get its name?

It is possible that during the winter, with the surrounding hill being covered in snow, the area may look black against a white background. The ground is quite rich and when wet, can look very dark.

Another theory is that in days gone by, black deeds took place here. Witchcraft, and possibly Black Magic was practised. The truth is that nobody really knows, but one thing is for sure - The Black Isle isn’t an island! 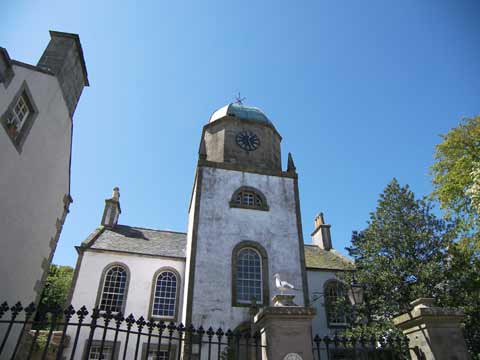 This well-preserved fishing town sits at the very tip of the Black Isle and is truly one of Scotland’s hidden gems. Well off the tourist route this delightful town is full of quaint fisherman’s cottages and impressive Georgian merchant houses.

Cromarty was built on trade from Norway, Sweden and Holland during the 17th Century. Large amounts of flax and hemp were imported from Russia to be spun and woven in the town.

Later, in the 1800s when the herring boom swept through northern Scotland, a fleet of fishing boats sailed from the harbour to catch the “Silver Darlings”. In the mid-1800s Cromarty was a departure point for the emigrant ships that sailed to the USA and Canada. There is a memorial stone in the town to the many Highlanders who had to emigrate when they were forcibly evicted from the land they worked to make way for sheep. We call this painful period of our history “the clearances”.

A famous son of Cromarty was the geologist and writer, Hugh Miller who was born here in 1802. The thatched cottage, where he was born, was built by his great grandfather, a pirate!  The cottage and the elegant mansion house next door have been converted into a museum that tells his life story. The town sits in the shadow of the two Sutors that guard the entrance to the Cromarty Firth. These impressive headlands are some 125 m high (406 ft) and are named after the old Scots word for a shoemaker, Sutor.

Local folklore says the hills were named after two giant shoemakers who threw their tools to each other across the channel.

The Cromarty Firth provided a safe haven for naval ships during both World Wars, and a squadron of flying boats operated from the firth until the 1950s.

Today, Invergordon is a popular port of call for cruise ships. Due to the deep water and the natural shelter, even the largest ships can tie up at the pier allowing their passengers to head off and discover the many attractions in the area.

The pronunciation of this delightful village is “och”, as the “av” is silent. Avoch is famed for its long tradition of fishing. If you take time to stroll around the village, you’ll see where the fishermen dragged their boats ashore before the harbour was built in 1815.

This hidden glen is not far from Rosemarkie and is the location of an RSPB Nature Reserve. The delightful wooded ravine, complete with cascading waterfalls is home to a wide variety of birdlife, including buzzards, song thrush, bullfinch and spotted flycatcher.

People have lived in Munlochy since pre-historic times. A bronze-age burial site was discovered to the south of the village, and several early tools have been found in the area.

Most people visit Munlochy to see The Clootie Well, whose story goes back to the earliest times. In ancient Scotland, it was thought that the water in the well had health-giving properties. Pilgrims with all sorts of ailments would drink the water and leave a gift of a piece of cloth (or cloot) to the local spirits.

As the cloth disintegrated, so legend had it, the ailment that the pilgrim was suffering from would slowly disappear. The name Beauly comes from the French “Beau lieu” which means beautiful place. A Priory was founded in 1230 by Valliscaulian Monks who constructed the building using the local pink stone. It was expanded up until the Reformation, after which it fell into decay.

It is said that Mary, Queen of Scots, spent a night at the village of Beauly in 1564. Later, in the 1650s, Cromwell’s troops removed some of the stone from the Priory to build a fort at Inverness.

In the popular Outlander books, the heroine, Claire Randall, meets the seer Maisri at Beauly Priory. The Black Isle’s only distillery is found at Muir of Ord, which is famous for its connections with cattle trading. Cattle, which was the mainstay of the Highland economy, would be driven to Trysting Grounds like Muir of Ord to be bought and sold.

Glen Ord Distillery was founded in 1838 and produces The Singleton of Glen Ord using barley from the Black Isle and water from the White Burn to create a malt whisky with fruity influences.

Almost all the whisky produced at Glen Ord is exported to whisky fans in South East Asia, so one of the few places to pick up a bottle here in Scotland is from the distillery shop.

Discover the many delights of the Black Isle for yourself with Scottish Tours. Tours are available from Inverness, including dolphin-watching, time to explore Cromarty and the chance to visit Glen Ord Distillery. All these are features of the popular Highland Experience one-day tour.