The life and times of Rob Roy MacGregor

The Trossachs region is part of the Loch Lomond and Trossachs National Park. Over the years, it has become known as Rob Roy MacGregor country. Why? Because this picturesque part of Scotland was where the folk hero Rob Roy MacGregor lived and worked.

Many travellers visit Scotland to follow in the infamous Highland Rogue’s footsteps, and today we tell his story and try to separate fact from fiction.

Who was Rob Roy MacGregor? 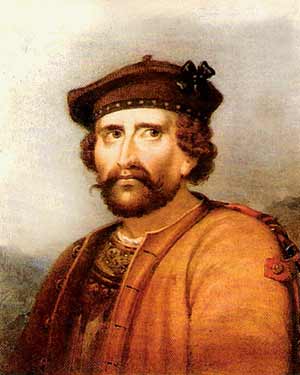 In Gaelic, his name is Raibeart Ruadh MacGriogair - the Ruadh meaning red (because of his red hair), and this was anglicised to Robert Roy. He became known as Red Rob.

He was said to be very skilled in wielding a broadsword. Some say he had unusually long arms and great upper body strength.

There are contrasting tales about him. Some talk about his protection and generosity towards impoverished farmers - the legends celebrate him as a Scottish ‘Robin Hood’.

Others highlight his violence and cruelty in protecting his own interests.

In reality, he was an outlaw, a soldier, a cattle trader, and a cattle raider.

Rob was born in Glengyle, at the head of Loch Katrine in the Trossachs area of the Scottish Highlands, on 7th March 1671. This area of Scotland was based very heavily around the clan system.

As a boy, he learned hillcraft, hunting, and surviving in the wild. These skills would serve him later in his life.

The history of Clan Gregor 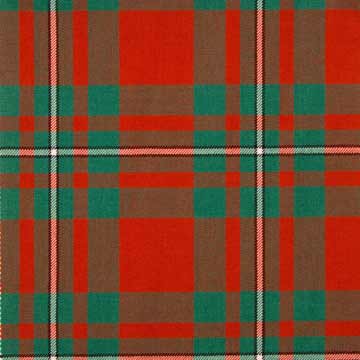 The MacGregors are part of the Clan Gregor, a noble and proud clan, who claimed to descend from the ancient clan Alpin, of whom King Alpin was Scotland’s first King. However, over the years, their reputation was sundered.

They were powerful and owned a lot of land around the Loch Katrine area. So much so that rival clans in the area became very jealous of the MacGregors and successive Scottish kings, with an eye on their land, sanctioned acts of cruelty against them.

Over time the MacGregors were persecuted, and their lands were taken. During the reign of James VI they were forced to survive by thieving, and even their name was outlawed. Children could not be christened MacGregor, and they were not allowed to carry arms or congregate in groups of more than 4.

By the time Rob Roy was born, the rules against them had been somewhat relaxed, and the clan were mostly left in peace to get on with their lives, but the prejudice remained, and the reputation of Clan MacGregor was damaged forever. In later life, Rob would regularly sign his name as Robert Campbell, Campbell being his mother’s maiden name. 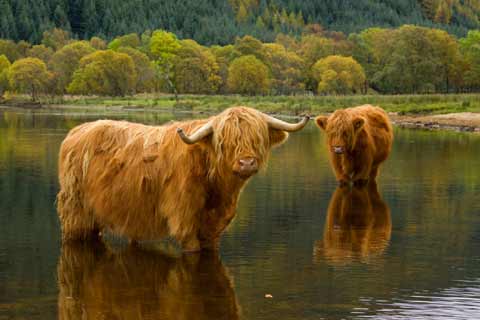 Fortunately, Rob’s father had some powerful friends. The Earl of Montrose petitioned to get the MacGregor name restored, and the Earl of Moray gave Rob’s father a farm in Glengyle, where Rob was born.

Cattle were an important commodity, and when he entered adulthood Rob Roy leased some land in Balquihidder and became a cattle farmer, just like his father, Donald Glas. Rob gained respect as a skilful trader and drover.

The Highlands at that time were a dangerous place to survive as a farmer. Raiding or ‘reiving’ on others’ lands and livestock was very common. 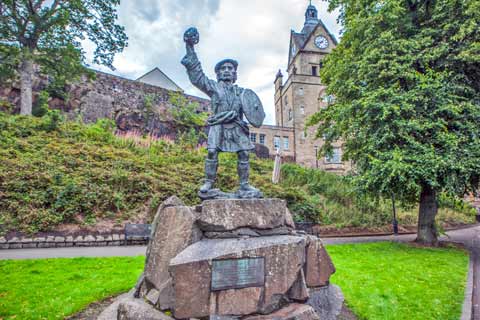 Rob was part of the ‘watch’ that protected his neighbours’ cattle in return for payment. It was accepted practice at the time, actually thought of as a tax, called blackmail. Rob, however, also engaged in cattle thieving, or ‘reiving’ himself.

He became renowned as a very able protector, and stories spread of his success in re-capturing stolen livestock for other farmers, in return for payment, of course.

Rob’s protectionism was in direct opposition to the official Black Watch, a land army paid for by all landowners to protect the highlands. This, of course, did not go down well with the authorities!

He became adept at playing powerful landowners off against each other, gaining protection from certain nobles because his thieving and raiding was a menace to their rivals.

In 1711, Rob Roy borrowed money from the Duke of Montrose. The deal was that Rob would purchase some cattle, fatten them up and sell them in England. Both men would share the profits, but disastrously, Rob’s associate disappeared with the money. Despite trying all he could, Rob was unable to get the money back.

A warrant for Rob’s arrest was issued by the furious Duke of Montrose. Rob tried to clear his name, but he was declared an outlaw. The Duke of Montrose forced Rob off his land and burned his farm, and his wife was brutally raped by Montrose’s factor, Graham of Killearn.

In return, Rob mounted a campaign of thieving and lawlessness against Montrose and Killearn. He would go around the tenants collecting their rent, saying it was in the name of Montrose. So when Killearn the factor turned up for the rent, it had been already paid - to the rogue Rob Roy MacGregor! 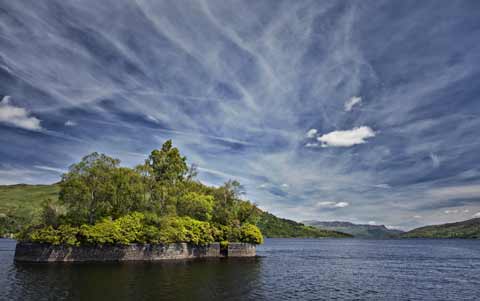 One story goes that he captured and imprisoned Killearn on Eilean Dharag, a little island on Loch Katrine, for almost a week. Unfortunately, Montrose would not pay the ransom on his factor’s head, so Rob had to let him go with a warning never to collect rent on the land that had originally belonged to the MacGregors again. The island has become known as Factor’s Island.

The bitter feud between Rob Roy and Montrose lasted for many years and it was during this time that Rob Roy earned his reputation. Entertaining stories of his many arrests and subsequent daring escapes quickly spread throughout Scotland and beyond!

As we’ve seen, the MacGregors suffered from a long history of oppression, but they blamed their persecution on the politicians who attended the royal court rather than the monarch. They continued their tradition of fighting on the side of the Stuart Kings after King James VII of Scotland and II of England was deposed by William of Orange in the ‘Glorious Revolution’ of 1688.   Rob and his father were involved in various Jacobite battles, including the risings in 1689 and 1715, to restore exiled James VII and II and his descendants back to the Scottish and English thrones.

Bonnie Prince Charlie’ The Young Pretender’ was the grandson of James VII and II, and he mounted his own attempt to re-capture the crown in 1745.

Support for the Jacobites 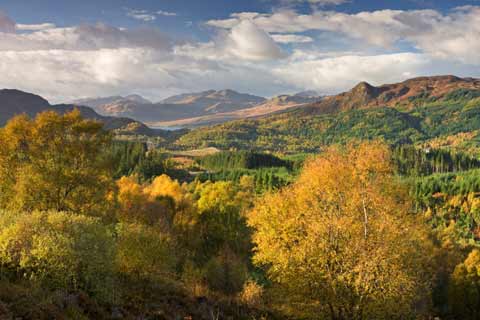 Due to Rob publicly committing himself to the Jacobite cause, his name was added to a Government list of Highlanders denounced as rebels and charged with high treason.  Therefore the status of rebel was added to Rob’s reputation, as well as outlaw and bandit.

In an attempt to subdue the perceived lawlessness in the Highlands and to suppress the anti-government feeling, an indemnity act was issued in 1717 to pardon those who had been part of the uprising.  But, because of the MacGregor clan’s reputation, Rob Roy was not included in the pardon and attempts to hunt him down and capture him intensified.

Up until this point, stories had spread about Rob’s exploits, and his name often appeared in ballads and tales. However, after the publication of a biography called ‘The Highland Rogue’, in 1723, the Rob Roy legend really began to take off. 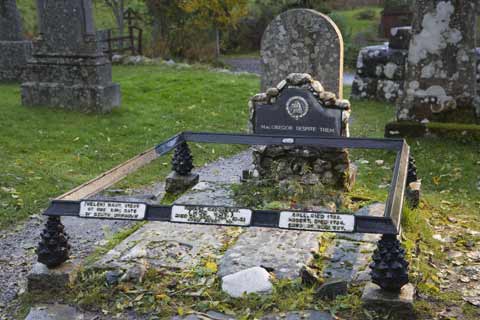 Rob was in his 50s and realised that he couldn’t remain an outlaw for the rest of his life, so he finally surrendered to Government forces and was given a pardon.

It is thought that the notoriety he garnered as a result of being the subject of a much-read (and vastly exaggerated) biography was in some way responsible for his Royal pardon.

Rob died peacefully at his farm in Inverlochlarig, Balquihidder, on 28th December 1734. His grave lies in the Kirkyard at Balquihidder, and an inscription reads defiantly ‘MacGregor despite them’.

1723 book The Highland Rogue mythologised him during his own lifetime.

Later, in the 19th century Walter Scott and Wordsworth enhanced the romantic legend of the ‘Scottish Robin Hood’.

How much was true? 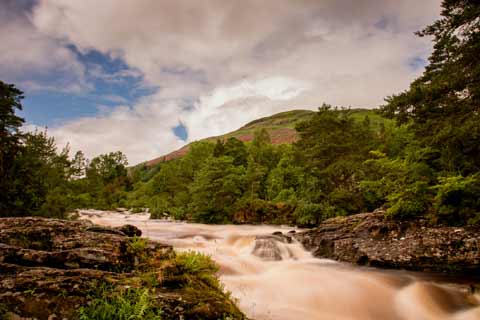 Rob Roy’s notoriety has made him the subject of various books and movies. There’s even a cocktail named after him, and of course, there’s the Rob Roy Way – a 128km walking trail that covers much of the area where Rob spent his life, starting in Drymen in the Trossachs (on the route of the more famous West Highland Way) and ending in Pitlochry, in Perthshire.

1723 Highland Rogue by an anonymous author was published during Rob’s lifetime and enhanced his reputation. It has been suggested that Daniel Defoe was the author, but that theory is now mostly discredited. 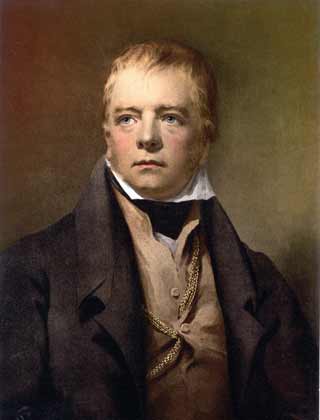 1817 Rob Roy by Sir Walter Scott. This novel greatly romanticised him and is the primary source of the legend that’s known today. The story featured Rob as a character. Sir Walter Scott’s former house Abbotsford, in the Scottish Borders, contains Rob Roy’s gun in its armoury room

It’s easy to discover more about Rob Roy and visit the places connected with his life on a one-day tour from Edinburgh or Glasgow.

Choose Scottish Tours for easy booking with no-hassle change and cancellation terms. There are no booking fees, and your money is protected, thanks to our ABTA financial bond.

See our full programme and book your Scotland Tour online.