For generations of children and adults, a visit to a pantomime is an annual Christmas treat. Sadly, the theatres and halls that are usually filled with laughter and singing are dark this year.

All is not lost, however. Over the centuries, this beloved entertainment form has continually evolved, and 2020 is no different. Many productions have moved on-line so families can still enjoy the traditional panto experience from the comfort of their own home.

So why not take a seat, pour a cuppa and grab a mince pie as we look at the story of pantos in Scotland and see what's available to enjoy in cyberspace - "oh yes we will"!

The history of pantomime in Britain 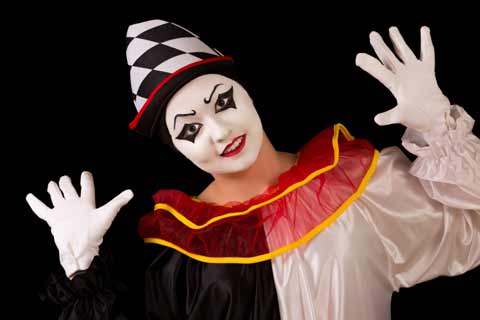 It's thought that the history of the pantomime can be traced back to Italy in the 1600s where street artists performed "Commedia dell' Arte". The show used dance, music and acrobatics to tell the mischievous story of Harlequin, a willy outlaw who wears clothes made of patches, and his acquaintances Scaramouche, Pierrot and romantic interest, Columbine.

During the next century companies of travelling artists sang, danced and performed versions of the story at markets and fairgrounds throughout Europe.

By the early 1800s, Commedia reached London with Harlequinades, as early pantomimes were known, being performed at several theatres. In those days, the story was set to music, but there was no dialogue. 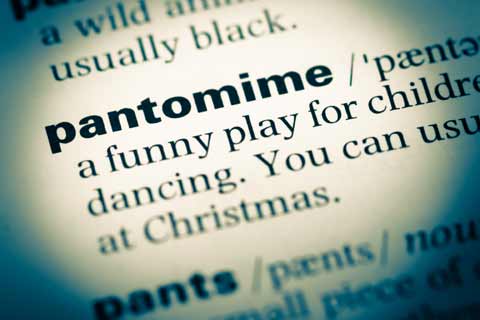 The rise of the music halls during the Victorian era introduced pantomimes to a broader audience beyond London. The story of Harlequin was gradually replaced with storylines based on traditional fairy tales such as Dick Whittington, Robin Hood and Peter Pan.

These new themes introduced popular stock characters such as Prince Charming, Widow Twankey, along with Snow White and the Seven Dwarfs. The modern pantomime that we know and love today had been born.

If you would like to discover more about the history of pantomime in the UK there is an excellent radio programme currently on BBC Sounds presented by the sadly missed Barbara Windsor called Oh Yes It Is. It will only be available until early in 2021 so don't miss it:

What is a Christmas Pantomime? Born out of the Music Hall tradition Pantomimes take place throughout Scotland in a season that covers the Christmas holiday period.

Professional productions can run for a month or more, with up to 12 shows a week while, at the other end of the scale, amateur casts might perform in a local hall just once or twice. 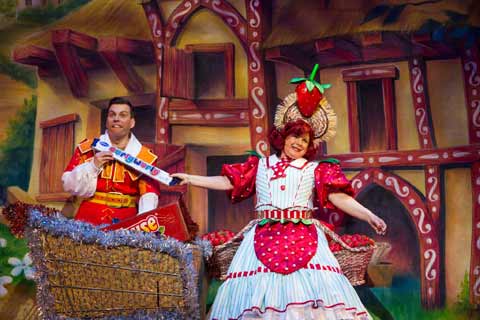 As we've said, many stories are based on old fairy stories with 3 famous pantomimes being Jack and the Beanstock, Aladdin and Puss in Boots. The traditional tale will be updated with references to current goings-on and present-day celebrities.

It has been a tradition that the Principal Boy is played by a female, although in recent years that is not always the case. The practice dates from Victorian times where a female leg was never seen uncovered, for modesty's sake.

Dressed in male breeches, an actress could display as much leg as they wished thrilling the audience with a glimpse of ankle and even the odd slap of a thigh. One thing that hasn't changed, however, is that the Pantomime Dame must be played by a male. What is a pantomime dame?

Well, there is nothing quite like them. Dressed in outrageous costumes and famous for telling risqué jokes, they usually lack any hint of femininity. In fact, a typical Panto Dame is about as far away from RuPaul as you could possibly imagine!

Another essential member of the cast is the Villain who will be booed and hissed by the children in the audience from the moment they step on stage. Often there are loud warnings of "he's behind you" shouted by the audience as the baddy tries to capture the pantomime heroes.

Needless to say, in the end, good will always triumph over evil, and all the members of the audience, no matter their age, will sleep soundly in their beds without the fear of having nightmares. 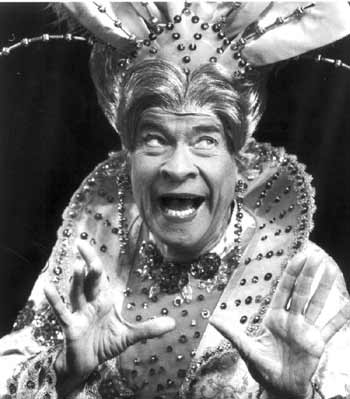 In Scotland, many famous stars have performed as pantomime dames over the decades. Stars of yesteryear include George Willis and Will Fyffe (famous for singing "I belong to Glasgow").

Sir Harry Lauder famously sang his renowned hit "Roamin in the Gloamin" when appearing in Little Red Riding Hood at the Theatre Royal, Glasgow in 1910.

More recently comedians Allan Stewart, Tony Roper and Gregor Fisher have all appeared in Scottish productions. Perhaps the most famous Scottish pantomime dame is Stanley Baxter. He's probably best known to UK audiences for his eponymous TV entertainment extravaganzas that were broadcast in the 1980s and 90s.

In Scotland, however, he is best known to theatre-goers as the best Pantomime Dame of his generation.

Sadly, it's not possible to attend a live performance this year, but many productions have taken to cyber-space so audiences can enjoy the fun and spectacle in their own homes. Here are some of the Scottish Christmas Pantomime performances you can access on-line this festive season.

The Scunner That Stole Christmas 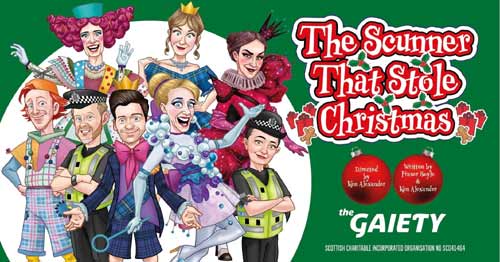 Presented by the Gaiety Theatre in Ayr this five-episode series is a community effort full of energy, beautiful costumes and witty jokes. Dourina, the Soorfaced Sorceress steals Christmas and locks everyone out of the theatre.

Join the panto team as they go on a quest to discover the magical ingredients of Christmas.

Oh Yes We Are This exuberant entertainment is brought to Zoom viewers by the Perth Theatre whose famous panto dame, Barrie Hunter, appears this year as Heidi Hoall.

Without an audience to entertain just what can a panto dame to do as, along with the rest of the cast, she is trapped in her dressing room while the villain, Corrupta plays havoc with her mirrors, magic lamps and poisened apples.

As a live performance, this fun-packed panto gets as close as possible to a real theatre experience and is getting rave reviews.

This year the National Theatre of Scotland has turned to the traditional German fairy tale from the Brothers Grimm for their 2020 on-line panto.

In a celebration of music, theatre and storytelling, this exquisite performance was filmed at Stirling Castle and is available to be viewed free of charge.

Are there pantomimes on TV this Christmas?

If you can't access the various on-line pantos, you can always turn to your nearest TV to catch a performance this year.

Cinderella, A Comic Relief Pantomime has a star-studded cast including The Crown's Olivia Colman as the Fairy Godmother; Tom Hollander as Baron Hardup and Guz Khan as Buttons. The Ugly Sisters are played by This Country co-stars Daisy May Cooper and Charlie Cooper.

Wishing you a Merry Christmas and a Happy New Year

As we head towards the Festive Season, all of us at Scottish Tours would like to wish you and those closest to you a very Happy Christmas and all that is good for the New Year.

We hope that you will stay safe and healthy in 2021 and that, when the time is right, we'll have the opportunity of welcoming back onboard a Scotland tour.