With a stunning location on a tiny island at the confluence of three lochs, this romantic fortress is one of Scotland’s most famous sights. Visitors from all over the World flock to admire the iconic view and discover the history of Eilean Donan Castle.

The picturesque setting has attracted many famous filmmakers over the years. Eilean Donan Castle movies have included Highlander 1986 and the World is not Enough 1999. If you are planning a visit, why not learn more with this helpful guide from Scottish Tours.

Where is Eilean Donan Castle?

The castle sits at the meeting point of Lochs Duich, Long and Alsh, not far from the pretty village of Dornie. The castle is located 13 km (8 miles) from Kyle of Lochalsh, from where the road bridge will sweep you over the sea to Skye. 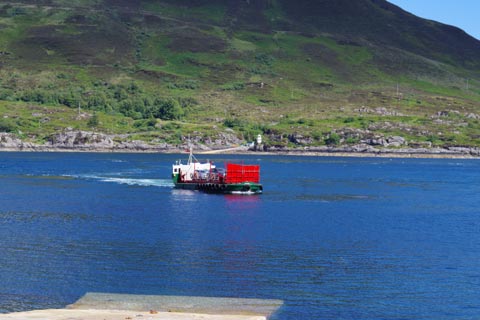 If you’d like to take the traditional route, it’s 29 km (18 miles) across the twisting old military road to reach Glenelg, where the MV Glenachulish makes the short crossing to the Isle of Skye. The community-owned ferry is the last manually operated turntable ferry in service in Scotland.

Coming from the south, you can take the A87 through Glen Shiel, scene of a famous Jacobite battle and home to the magnificent Five Sisters mountain range. An alternative route is the A890 which offers stunning views of Loch Carron.

Eilean Donan means “Island of Donan” and refers to St Donan, who lived on the island at the beginning of the seventh century when Christianity was first introduced to the Western Isles. Excavations have found evidence of an earlier Pictish fort, but its origins have been lost in the mists of time. 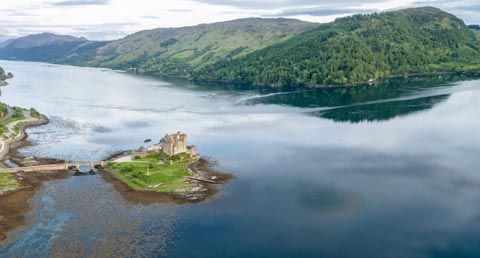 The first castle on the island was built in the 12th or 13th century during the reign of King Alexander II (1214-1249). It was built to protect the lands of Kintail from Viking invaders, who controlled much of Scotland’s west coast and Hebridean islands.

In 1263 King Alexander III gifted the castle to Colin Fitzgerald, the son of the Earl of Desmond and Kildare. Fitzgerald had settled in Scotland from Ireland and had supported the King at the Battle of Largs two years earlier. Although the battle’s outcome was uncertain, it led to Scotland gaining control of the Hebridean isles.

Fitzgerald became the first Baron of Kintail. When his grandson succeeded the title, he was known as Coinneach MacCoinneach in Gaelic, which means “Kenneth the son of Kenneth.” This became corrupted into MacKenzie, in English, and so the famous Scottish Clan was established. 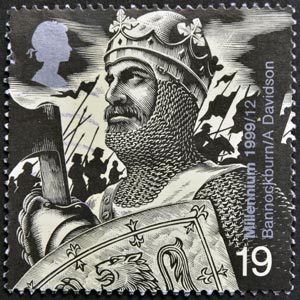 In the early 1300s, when Robert the Bruce was disowned by many of the Clan Chiefs and hunted by the English, he took refuge at Eilean Donan between 1306-7 after his defeat at the Battle of Methven.

Later, his fortunes changed, and after winning some decisive battles, Bruce became the King of Scotland.

There was little regard for the rule of law in the Kintail region at that time. Bruce sent his nephew, Randolph, who was the Warden of Scotland, to take things under control. In one brutal event, fifty local wrongdoers were beheaded, and their heads exhibited at the castle as a warning to others.

The Clan MacRae were the bodyguards of the Clan MacKenzie and became the Constables of the Castle in 1509. They controlled the area and were involved in many raids and clan battles.

In one famous incident, Eilean Donan Castle was the subject of an attack by 400 warriors under the control of Donald Gorm, a Lord of the Isles. The acting Constable, Duncan MacRae, successfully defended the castle and saw off the attack. Firing his last arrow, he fatally wounding Gorm.

The Jacobite Uprising of 1719

In 1719 there was an unsuccessful rising in support of the exiled King James II. You can discover more about the Jacobites by reading our Bonnie Prince Charlie and the Jacobites blog. 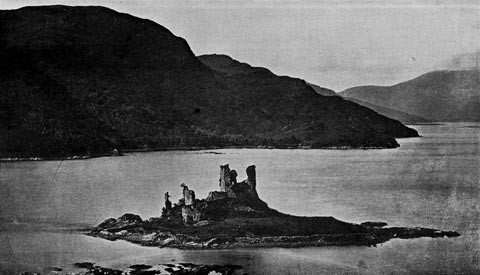 Spanish forces had been sent to support the Jacobites and were based at Eilean Donan Castle. On 10 May 1719, three Royal Navy frigates sailed into Loch Alsh and attacked the castle. With a garrison of only 48 Spanish soldiers, they were quickly overwhelmed and taken prisoner.

When the Government troops searched the castle, they found 343 barrels of gunpowder. What was left of Eilean Donan was blown up. For nearly 200 years, all that was left of this once-mighty fortress was a ruined stump.

In 1911 Lt Colonel John Macrae-Gilstrap bought the island, and with the help of Farquhar MacRae, started work on rebuilding the castle. Work commenced in 1912 and took 20 years to complete. The cost was £250,000 (nearly £18 Million at today’s values).

It’s said that the design of the castle we see today came to Farquhar MacRae in a dream. The conception was later confirmed to be faithful to the original design when old plans were discovered stored in Edinburgh Castle.

What to see on an Eilean Donan Castle visit? 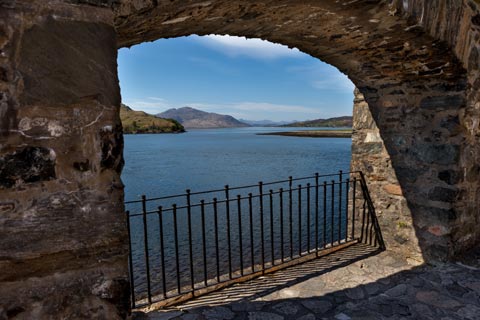 After crossing the bridge and entering the castle walls through the fearsome portcullis, visitors enter the Inner Courtyard. Stepping inside the Keep, you’ll find period furniture, Jacobean relics and extensive displays of weaponry.

The impressive Banqueting Hall is decorated with family portraits and Coats of Arms associated with the Clan MacRae.

From the lower battlements, there are fine views towards the distant mountains of Skye and, if you are lucky, you might even spot some wildlife. Otters, dolphins and even golden eagles have all been seen from this fantastic vantage point.

If you are a keen photographer, you should plan to visit the castle during what’s called the blue hour. That’s when the sun has set, and the castle’s floodlit profile contrasts with the twilight hues of blue from the loch and surrounding mountains.

We would suggest allowing an hour would be sufficient for most visitors. You can find admission prices and opening hours here.

How to get to Eilean Donan Castle? 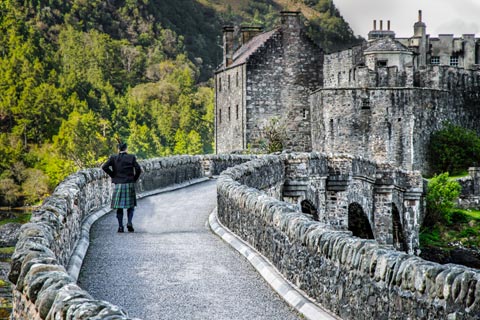 If you are driving, it’s easy to include a visit in your Scottish Highlands itinerary, and there is convenient parking at the castle site.

By public transport, it’s a bit more complicated. The nearest train station is at Kyle of Lochalsh, which has several trains from Inverness. Scottish Citylink has several coaches daily from Glasgow, Fort William and Skye, which pass through Dornie.

If you prefer not to drive, the easiest way to include a visit to Eilean Donan Castle is to take a tour from Inverness. The popular Eilean Donan Castle and the Isle of Skye one-day tour features a stop at the castle, giving you plenty of time to explore and take photographs. There’s also the bonus of a guided tour of the beautiful Isle of Skye too.

If you’ve always wanted to visit this fairytale fortress, then hop aboard and let Scottish Tours take you there.

Tours depart from Edinburgh, Glasgow, Inverness and London. Using our years of experience and local knowledge, we’ll let you explore the natural beauty and incredible history of this beautiful land we are proud to call home.