One of the best ways to experience the breathtaking beauty of the Scottish Highlands is to take a trip on the picturesque West Highland Railway Line, the route of the real Hogwarts Express!

Highlights of the Jacobite Steam Train Route include Britain’s tallest mountain, shortest river and deepest freshwater loch. This 42-mile section of the route also contains the iconic Glenfinnan Viaduct, famous to Potterheads as the “Harry Potter Bridge”, but more of that later.

Be warned, it’s notoriously difficult to score tickets for this world-famous train trip. Read on and get some insider tips from the experts at Scottish Tours. 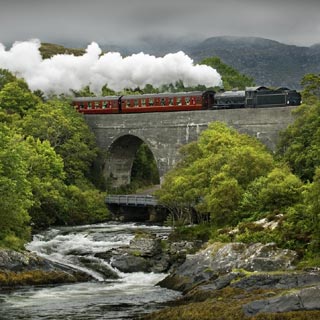 The construction of a railway line between Glasgow and Fort William started in October 1889. The ambitious project needed over 5,000 navvies to construct the line through remote glens and rocky passes.

The most challenging section was over the wilderness of Rannoch Moor, where the engineers had to float the track on a bed of earth and timbers. The line eventually opened in August 1894.

It took a further 7 years before the line was extended to Mallaig and the West Highland Line, as we know it today, was complete. The length of the line from Glasgow to Mallaig is 142 miles.

Stations on the West Highland Line 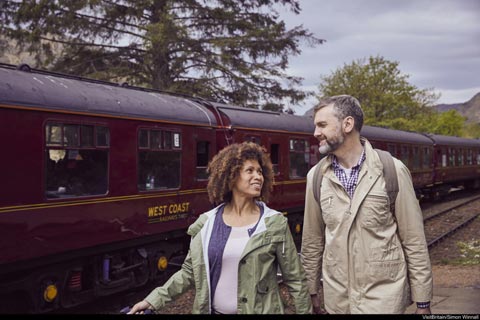 There are 26 stations between Glasgow Queen Street and Mallaig. Here are some of the more notable stops along the way.

Corrour - The highest station on the British Rail network is also one of the most remote. Sitting in the vast wilderness of Rannoch Moor, there is no road access.

Fort William - Sitting in the shadow of Ben Nevis and by the banks of Loch Linnhe “The Fort” is known as the Outdoor Capital of the UK.

Glenfinnan - This attractive station serves the famous “Harry Potter Bridge” and the monument to the Highlanders who participated in Jacobite Uprising of 1745.

Mallaig - The end of the line offer stunning views over the Sound of Sleat to the peaks of the Cuillin Hills on the Isle of Skye.

You can take the regular ScotRail, but a far more exciting experience is to join the Jacobite Steam Train as it puffs its way over the 42-mile section of the line between Fort William and Mallaig. The readers of Wanderlust Magazine voted the trip “The World’s Greatest Railway Journey”. Let’s look at some of the highlights to see why. 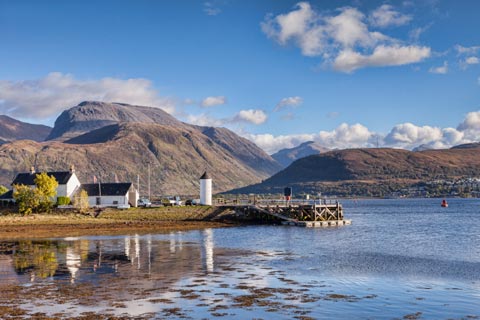 Shortly after the train chugs out of Fort William Station, it crosses the swingbridge over the Caledonian Canal. You’ll see an impressive flight of eight locks, known as “Neptunes Staircase”, which lifts the canal upwards on the start of its 60-mile journey through the Great Glen to Inverness and the Moray Firth beyond.

The rail track is followed by the A830, known as the Road to the Isles, along the banks of Loch Eil. If you look backwards, there will, hopefully, be views of the spectacular Nevis Range, including Ben Nevis, the tallest mountain in the United Kingdom.

It’s only a short distance to one of the journey’s highlights, crossing the Glenfinnan Viaduct. This impressive structure is 380 metres long (1,248 ft) and its 21 arches carry the track in a sweeping curve up to 30 m high (100 ft). The viaduct was constructed in concrete by the businessman Robert McAlpine. His enthusiasm for using this new building material got him the nickname “Concrete Bob”. 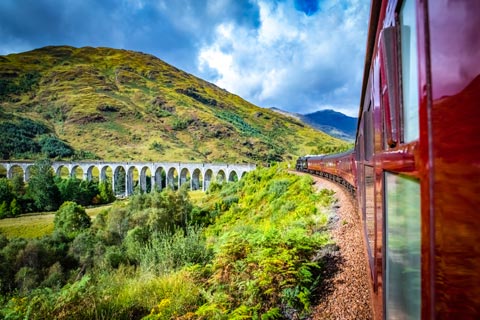 The viaduct is famed as the train bridge in Harry Potter as it has featured in several of the popular Harry Potter movies. It carried the Hogwarts Express as it steamed from Platform 93/4 at London’s Kings Cross Station to Hogwarts School.

Who can forget the Harry Potter and the Chamber of Secrets scene when Harry and Ron fly above the train crossing the viaduct in a flying sky-blue Ford Anglia.

The steam engine and several of the carriages of the Jacobite Steam Train were used in the filming.

As the train crosses the viaduct, there are beautiful views of the haunting memorial commemorating the highlanders who fought for Bonnie Prince Charlie’s Jacobite Uprising in 1745. It has a picturesque setting at the head of Loch Shiel. After crossing the viaduct, the train will reach Glenfinnan Station. 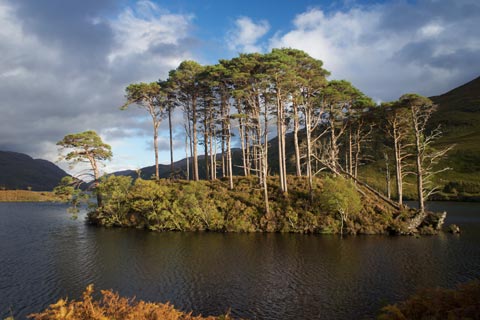 After navigating through two short tunnels, the train follows the shores of Loch Eilt. This charming scenery was used for the Hogwarts school grounds and the little island of Eilean na Moine is another Harry Potter filming location, being the setting of Dumbledore’s grave.

The next section of the route follows the banks of several sea lochs. After passing Loch Ailort, look out for the whitewashed “Our Lady of the Braes” church featured in the movie “Local Hero”.

At Loch nan Uamh, a cairn marks the spot where Bonnie Prince Charlie left Scotland for France after his defeat at the Battle of Culloden in 1746.

After reaching Arisaig, the most westerly station in Britain, the train steams inland, then there are spectacular coastal views over the “Silver Sands of Morar”, another filming location in “Local Hero”.

There are glimpses of Loch Morar, the UK’s deepest lake and, allegedly, the home of “Morag”, a monster considerably shier than her more famous relative, “Nessie”. We also encounter the River Morar. At less than 1 km in length, it’s one of Scotland’s shortest rivers.

On the final part of the run, look out for the Small Isles of Eigg and Rhum as well as the towering Cuillin Hills of Skye. Journey’s end is Mallaig, a thriving fishing and ferry port. 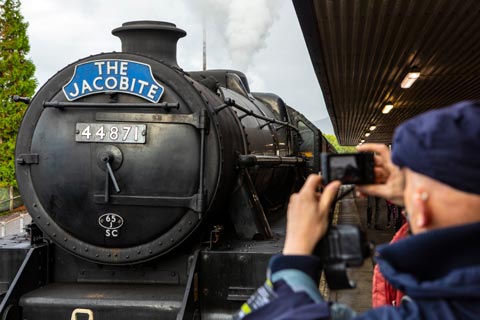 As you might imagine, the great demand to ride the Hogwarts Express in Scotland means tickets often sell out well in advance. If you plan to take a trip, early booking is essential. If you don’t plan to drive, you should carefully check out the train and bus timetables as an overnight stay in Fort William may be required.

If you have a bit more time, you can combine a fabulous two-night stay on the magical Isle of Skye with a trip on the Jacobite Steam Train.

Ride the Harry Potter Train in Scotland with Scottish Tours

We make it easy to include a memorable trip on the Jacobite Steam Train as part of your Scotland holiday plans. Check our wide selection of holidays and book your Scotland Tour today.