Guide to the Best Seafood in Scotland

The seafood caught in the waters of Scotland is renowned for being of the highest quality.  So much so, it’s directly shipped to the finest restaurants in the UK and mainland Europe. You don’t need to venture as far afield as London or Paris to sample this delicious marine harvest, as it can be found throughout Scotland, from humble fish and chip shops and seafood shacks to gourmet restaurants.

If you fancy a foodie holiday, there is no better place than Scotland. As well as seafood, Scotland’s larder is packed full of quality natural produce including locally bred beef, delicious soft fruits and artisan cheeses.

Types of Seafood in Scotland

Over 65 species of farmed and wild seafood can be found in the remote Scottish sea lochs and the deep waters of the North Sea and Atlantic Ocean. This makes Scotland one of the largest fishing countries in Europe. 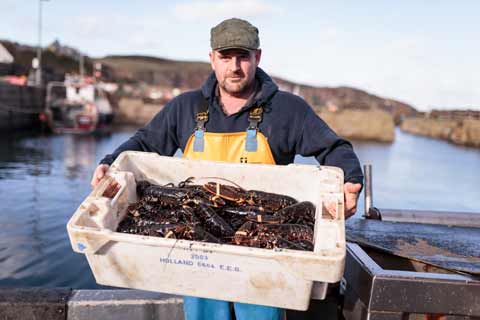 Managing fish stocks to ensure long-term sustainability is of vital importance. Some of the most popular fish that are landed at Scottish ports have Marine Stewardship Council (MSC) sustainable certification.

Haddock - Scotland’s favourite whitefish are caught primarily off the north and west coasts. If you have enjoyed traditional fish and chips, then the lightly battered fish in your supper is likely to be a filet of haddock.

Mackerel - this open-sea fish is Scotland’s most valuable species, and as it’s high in Omega 3 it is in increasingly high demand around the World. Try it in pate form with some warm sourdough toast, it’s delicious.

Herring - caught in the North Atlantic this oil-rich fish is a breakfast favourite in the form of kippers. 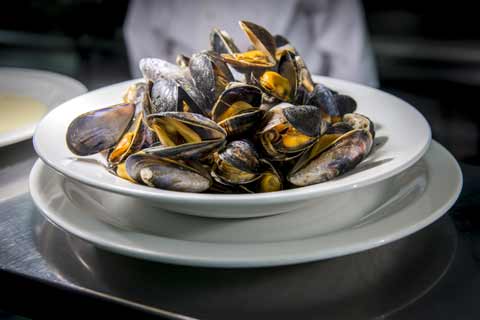 Mussels - rope-grown to maturity in around two years, these meaty specimens come from the west coast and can be found on the menus of pubs and restaurants throughout the country.

Scallops - are reared on the west coast of Scotland.  They are best served simply cooked in butter with a slice of lemon.

Salmon - most of the salmon served in Scotland is sustainably farmed in the cold, clear waters of the Scottish Highlands and Islands.

The quality is so high that Scottish farmed salmon has been awarded the famous Label Rouge by the French Government for the last 20 years. Look out for locally-cured salmon which can come in a wide choice of flavours including gin and whisky infused varieties.

To sample the freshest seafood, many people head to the picturesque fishing communities that hug our coastline. Here fishing boats return after days at sea to unload their catches. Take a wander down to the harbour to watch all the activity then later enjoy a memorable meal of the freshest seafood in a local pub or restaurant.

Areas you might want to explore include the East Neuk of Fife where the communities of Anstruther, Crail, St Monans and Pittenween all sit looking out to the Firth of Forth. 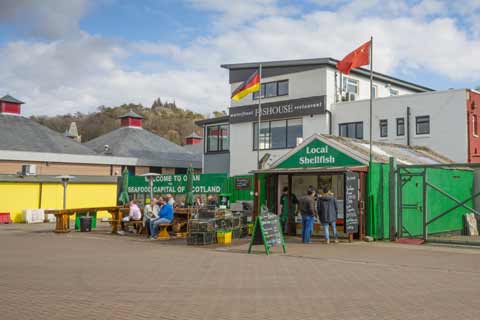 Argyll and the islands of the Inner Hebrides is another fishing area which is the focus of the famous Seafood Trail. Stretching from Luss on Loch Lomond to the winged Isle of Skye, some of Scotland’s most renowned seafood destinations are featured.

Oban, Scotland’s seafood capital, takes centre stage, of course. As the town has so many outlets offering really high-quality seafood, it’s become quite a foodie destination. Of particular note is the Seafood Shack Oban, which is situated on the ferry pier. It’s the ideal place to pick up an al-fresco lunch of fresh local langoustine tails or a crab sandwich. 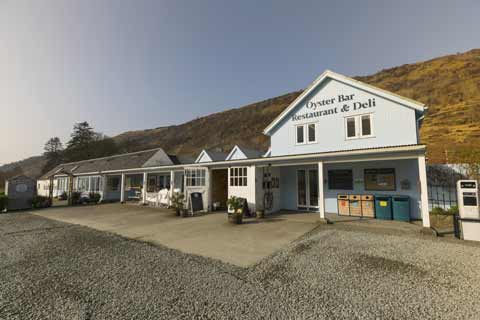 Slightly more up-scale is the Loch Fyne Oyster Bar, which supplies Michelin starred restaurants and famous retailers such as Selfridges. The restaurant sits by the shores of Loch Fyne and has been attracting seafood lovers since the 1970s.

Further along the banks of Loch Fyne sits Creggan’s Inn. Once owned by Sir Fitzroy Maclean who, through his friendship with writer Ian Fleming, is thought to be the inspiration for James Bond.

Arbroath is famed as the signing place, in 1320 of the Declaration of Arbroath, probably one of Scotland’s most famous documents. Some say it inspired the US Declaration of Independence in 1776.

The seaside town is also famous for a mouth-watering Scottish delicacy, The Arbroath Smokie.

What is an Arbroath Smokie? 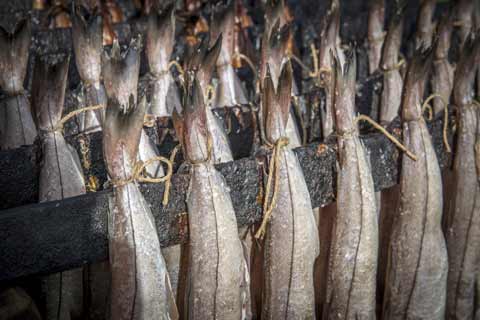 Freshly-caught haddock are hot-smoked in pairs using a traditional smoking process for around 40-60 minutes which both cooks and smokes the fish at the same time.

Traditionally produced in an area of the town, near the harbour, called “Fit o’ the Toon”, it’s thought that the cooking process may have been brought to this part of Scotland by Viking settlers.

The Arbroath Smokie has been given protected geographical status under European Law, giving it the same protection as Parma Ham, Champagne and Stilton cheese.

Best Fish and Chips in Scotland 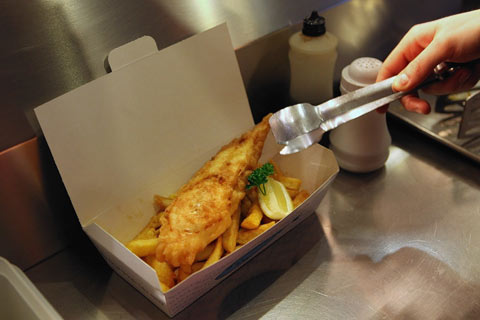 The Carron Fish Bar in the fishing town of Stonehaven has been voted Scotland’s best fish and chip shop in a national competition run by Seafish, the public body that supports the UK seafood industry.

Located by the banks of the Forth Estuary, Scotland’s Capital City has always had a connection to the sea. As the city expanded it enveloped the historic fishing villages of Newhaven and Granton. Even the independent port of Leith was subsumed into Edinburgh in 1919. 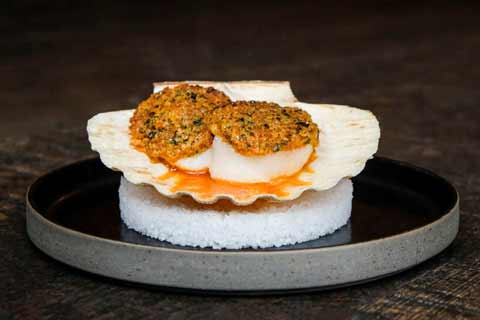 Located on George IV Bridge, just off the Royal Mile, Ondine is famed for using the very best fish and shellfish simply prepared.

The restaurant is bright and airy with magnificent views down Victoria Street. Notable dishes include Tempura Squid and Brown Crab Risotto.

Found on the waterfront by the Water of Leith, this atmospheric bar and restaurant offers a culinary experience like no other. Famed for its expert pairing of champagne and shellfish, the extensive menu on offer is simply stunning. A signature dish is the Fruits de Mer Royale to share which includes a whole Scottish lobster, Loch Creran oysters and Langoustines in the selection. 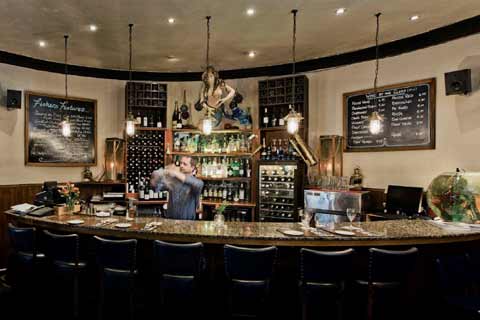 A popular seafood destination for the last 20 years, the original Fishers restaurant is set in a 17th Century watchtower overlooking the Water of Leith.

Famed for its imaginative menu, lookout for treats such as Arbroath smokie Mac ‘n’ cheese as a starter. and Monkfish satay with charred pineapple and sesame noodle salad as a main.

Glasgow has a vibrant restaurant scene with an ever-changing choice of eateries from casual street food to fine-dining and everything in-between. Although quality restaurants can be found throughout the city, there are hotspots in the Merchant City and uber-trendy Finnieston, where there is a fantastic selection of dining out options to choose from.

Here are some of the best seafood restaurants, that the “dear green place” has to offer. 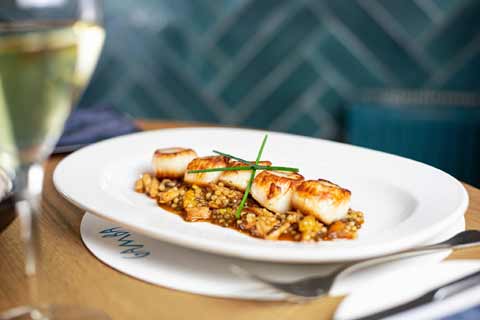 This popular city-centre restaurant has been serving quality seafood dishes in luxurious surroundings for over 20 years. The quality of the food produced by chef/patron Derek Marshall has gained the restaurant two AA rosettes and won many plaudits from food critics.

Many reviewers highlight the Seared King Scallops - served with puy lentils, pearl couscous and bitter orange as being particularly special.

Located next to Shields Road subway station this friendly restaurant is a Glasgow institution, serving only the freshest seafood, thanks to the proprietors also owning one of Glasgow’s finest fishmongers. 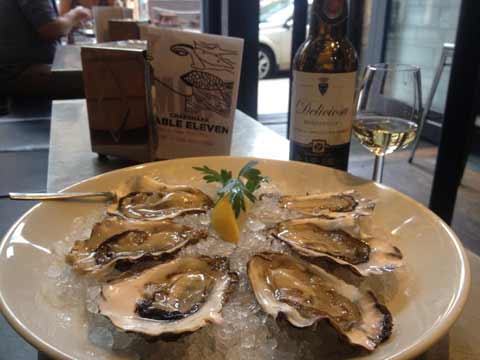 Expect to find creative dishes such as Tandoori Sea Bass or Smoked Haddock and Pea Soup. A top tip is to make sure you make your table reservation well in advance as this restaurant is often fully booked.

Situated in the heart of Finnieston, Glasgow’s funky dining and bar area, this lively restaurant focuses on serving top-notch seafood with no-frills.

The menu has changed little since the restaurant first opened in 2009 featuring Crab, Lobster, Langoustines and the ubiquitous Fish Supper, with a twist. There’s also a daily “specials” board including a catch of the day.

For more information on Scottish Food and Drink, check out our handy Information Page.

At Scottish Tours, we make it easy for you to discover the very best that Scotland has to offer.

Whether you want to try some of the freshest and most delectable seafood or you want to sample our local craft beers or savour a fine malt whisky, we’re standing by to give you an authentic Scottish experience.