Scotland is famous for its castles. There was once over 3,000 scattered throughout the country, and many have creepy stories and mysterious tales to tell. We’ve studied hundreds of gruesome tales to bring you our top 9 haunted castles in Scotland for you to investigate.

So draw the curtains and dim the lights, let’s go in search of creepy haunted castles!

This magnificent 800-year-old castle was once a Royal residence and played host to Robert the Bruce and King Charles I. The sumptuous interior was created by Lord Leith who bought Fyvie in 1889. He amassed a collection of arms and armour as well as impressive artworks including works by Raeburn and Gainsborough. 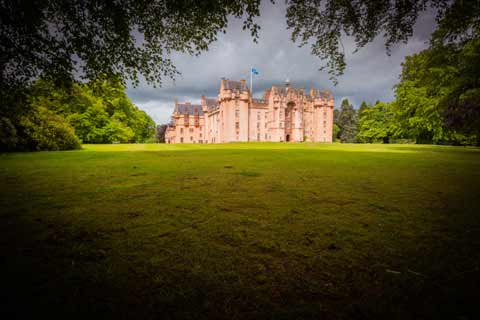 Fyvie is home to the ghost of Lilias Drummond, known as “The Green Lady”. Legend has it that a previous owner of the castle, Alexander Seton, starved her to death in revenge for not providing him with a son and heir.

The night that he remarried, she made an appearance outside the newlyweds bedchamber lamenting their nuptials and creating a hullabaloo.

In the morning it was discovered that she had scratched her name into the castle wall, which can still be viewed to this day.

One of Scotland’s most important historical monuments, Edinburgh Castle is on the to-do list for most visitors to Scotland’s Capital City. 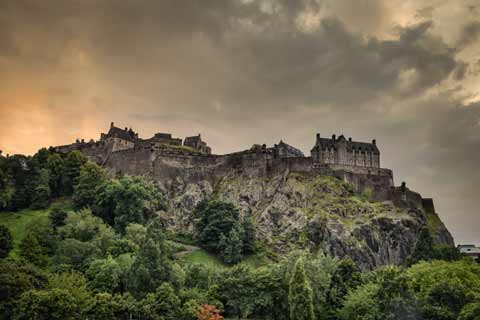 When the last tourists have left, and the castle is secured for the night, the soldiers on duty have reported hearing the faint sound of the bagpipes as they make their rounds.

The legend of the Edinburgh Castle Piper goes back several centuries when a tunnel was discovered under castle rock. No one knew where it went, and it wasn’t big enough for an adult to enter them so a young piper boy was sent in and told to play his bagpipes so the people above could trace his progress.

All worked well for a time; then, all of a sudden, the music stopped. Despite every attempt at a rescue, no sign of the boy could be found.

After a time, when all hope was lost, the order was given for the tunnel to be sealed. Ever since that fateful day, people claim to hear the music of the lonely piper boy as he waits, forlornly, to be rescued.

Could this be the most attractive castle in the World? It certainly has a fantastic location sitting on a little island where three sea lochs come together. The castle was blown up by a Royal Navy warship during the 1719 Jacobite Uprising which involved both Scottish and Spanish fighters.

The castle has paranormal activity with a Spanish soldier, who was killed during the attack in 1719, haunting. He is kept company by an apparition called “Lady Mary” who makes occasional visits to one of the castle’s bedrooms. 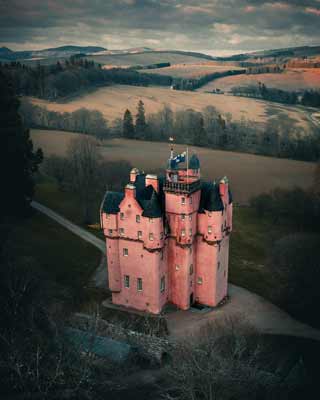 This elegant castle is the very essence of a baronial home. Complete with turrets, towers and cupolas and surrounded by beautiful grounds it is said to be the inspiration for Walt Disney’s Cinderella Castle.

The extensive grounds are home to Pine Martens, one of Scotland's most reclusive animals and Red Squirrels.

Although it enjoys a peaceful existence today, it has had a turbulent history and was the subject of ancient clan feuds. Within the pink walls of Craigievar lives the ghost of a fiddler who fell into the castle well many years ago and was drowned.

Several guests of the castle claim to have been awoken to the sounds of a violin being played. Despite extensive searches by castle staff over the years, the fiddler has never been found. 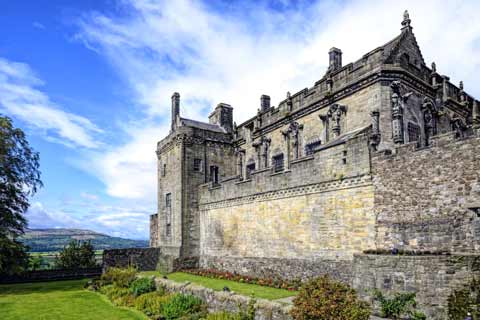 This mighty fortress stands on a volcanic core and looks out over the City of Stirling. Although it was built to protect the River Forth from invading armies, it was also the favourite home of the Stuart Kings and Queens.

In the heart of the castle lies the Royal apartments, Chapel Royal and the Great Hall, where magnificent celebrations were held.

As you walk around Stirling Castle, you might come across a ghostly Highlander, dressed in the full regalia and wearing a kilt. Many visitors mistake him for a tourist guide, but when they approach him for directions, he just turns away and vanishes in front of them. 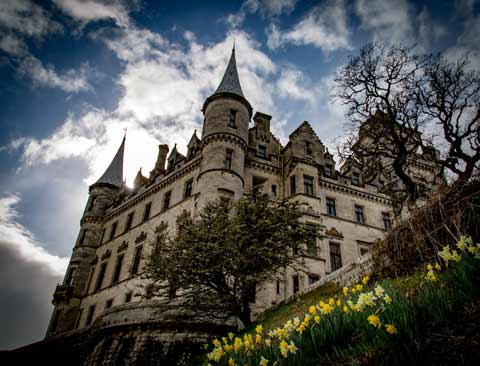 The largest house in the Northern Highlands boasts no less than 189 rooms. The apartments on the upper floors are haunted by Margaret, who was the daughter of the castle’s owner, the 14th Earl of Sutherland.

Margret had fallen in love with Jamie, a groom in the castle stables. Her father disapproved of the relationship, and while he sought someone more suitable, the Earl had her imprisoned the castle attic.

The lovers planned to elope, and a maid agreed to bring Margaret a rope so she could escape from her makeshift prison.

With her Jamie waiting below on his horse, Margaret climbed out of the window. As she was about to start her descent, her father entered the room. Margaret realised then that she and Jamie could never be together and let go of the rope.

The ghost of Margaret haunts Dunrobin Castle to this day, crying out in pain for her lost love.

You will never forget your first glimpse of Dunottar Castle. This dramatic cliff-top fortress has had a turbulent 1,300-year history and even in its current ruined state remains impressive and imposing. 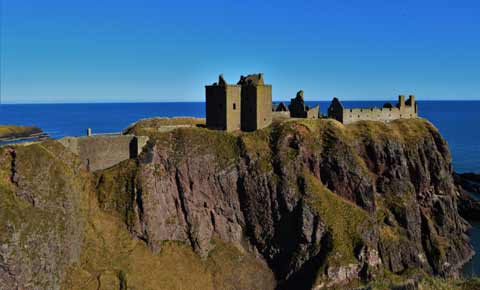 In 1698 180 people were imprisoned at Dunottar for refusing to recognise the legitimacy of the King. They were detained in a windowless cellar with little food and water for nearly two months.

During that time, 37 capitulated and were released, some tried to escape, although most were recaptured and five people died in the inhuman conditions.

When darkness falls, it’s said you can hear the cries of pain and suffering of these poor souls agonising about their fate. They were not to know that when they were finally allowed to leave the castle transportation to the West Indies awaited them.

In the very north of Scotland, overlooking Sinclair’s Bay sits Ackergill Tower. When Ackergill was a de-luxe hotel, it was one of the favourite haunted castles in Scotland to stay in.  It’s now a private residence. 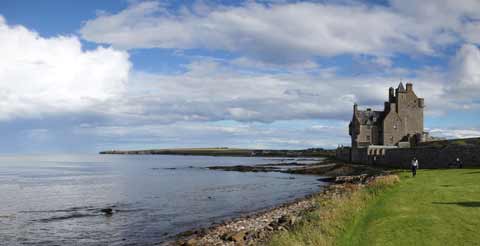 The story involves a local girl Helen Gunn, who was known as the “Beauty of Braemore”. She had come to the attention of a clansman of a rival clan called Dugald Keith.

He was so besotted with her that he kidnapped her and imprisoned her at Acklergill. To escape his unwelcome attention, she climbed to the top of the highest tower and jumped, killing herself.

Ever since her ghost has been a permanent resident at Ackergill. She is often seen wearing a long red gown and with flowing black hair moving from room to room.

The tragic story of Helen’s death was only one chapter in a 500-year-old feud between the Gunn and Keith Clans which came to an end in 1978 when the two Clan Chiefs met to sign a Treaty of Friendship.

As the ferry sails into Brodick Bay, one of the first sights you will see of the Isle of Arran is Brodick Castle sitting in the shadow of Goat Fell, the island’s highest peak. Built as the seat of the Dukes of Hamilton in 1844, the history of the site goes back to Viking times. 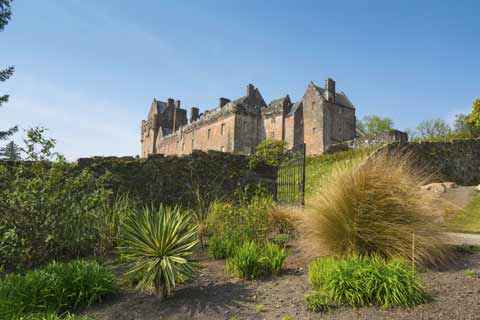 There have been reports of all sorts of spooky activity here. The oldest part of the castle is said to be haunted by a grey lady. The story goes that when a local woman was diagnosed with “the plague”, she was incarcerated in the castle dungeon, and as no-one was brave enough to feed her, she starved to death.

Arran is famed for its wild deer population and legend has it that when the Clan Chief is close to death, a white deer will make an appearance in the grounds of the castle. Thankfully for the head of the Clan Douglas, this is a relatively rare occurrence.

Go in search of haunted castles with Scottish Tours

Discovering Scotland’s myths and legends is just part of the Scottish Tours travel experience. Our tours embrace the natural beauty our country is famed for, while the expert tour guides will introduce you to our history, sometimes romantic, occasionally turbulent but always intriguing. You can expect some humour and a fair bit of storytelling too.

Better times are coming and where better to celebrate than in Scotland. Now is the time to research your ideal Scotland Tour with Scottish Tours.