5 Castles in Skye Scotland To Visit

A visit to the Isle of Skye is a must-see for many visitors to Scotland. They are drawn to this Hebridean island to experience its breathtaking scenery and incredible nature.

One of the top things to do on Skye is to discover its turbulent past of clan feuds and bloody battles. There’s no better place to do this than on a visit to one of the island's historic castles.

When to visit Skye

Of course, Skye is beautiful all year round. Low cloud and mist can be part of the Skye experience at any time, after all the Gaelic name for the island is “Eilean a Cheo”, the misty isle.

While this can add atmosphere to your visit, it’s not really conducive for sightseeing so why not have a castle visit up your sleeve, just in case the weather isn’t being kind.

The weather is, generally, best between May and September. July and August are usually the busiest for visitors, while records suggest mid-April to mid-June offers the lowest rain levels. 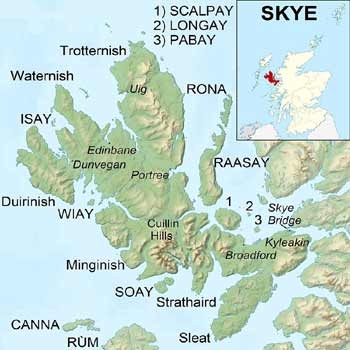 The coastline of Skye extends over 400 miles.

The Vikings settled on Skye in 794 and stayed for over 550 years.

According to legend, if you hold your face in the water flowing under the Sligachan Bridge for 7 seconds and let it dry naturally, you'll be awarded eternal beauty.

Dinosaurs lived on Skye more than 165 million years ago.

Travel to the Isle of Skye 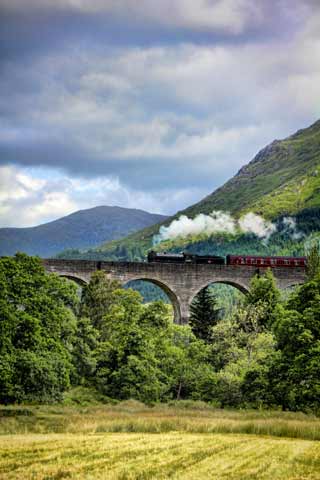 It’s easy to include Skye on your next visit to Scotland. Perhaps the most exciting way to reach the island is aboard the famous Jacobite Steam Train to Mallaig then taking the ferry “over the sea to Skye”.

If your time is short, then an Isle of Skye one day tour from Inverness might be a perfect choice. Several itineraries are available, allowing you to explore different attractions on Skye, including the famous Trotternish Peninsula and Glenbrittle Fairy Pools.

You can always hire a car, but then you’ll not have the benefit of the insightful commentary provided by an expert driver/guide. Continually having to watch the road, rather than the glorious scenery is a real drawback too.

Which Isle of Skye castle to visit?

There are seven castles located on the Isle of Skye. They range from ruined remains to grand houses filled with historical artefacts. Let’s have a look at the most popular attractions.

Dunvegan is the only Highland castle to have been inhabited continuously by the same family for over 800 years. It has been the home of the Chiefs of the Clan MacLeod since the 1300s. Overlooking Loch Dunvegan, the castle is surrounded by extensive formal gardens which contain exotic plants, specimen trees and gushing waterfalls. 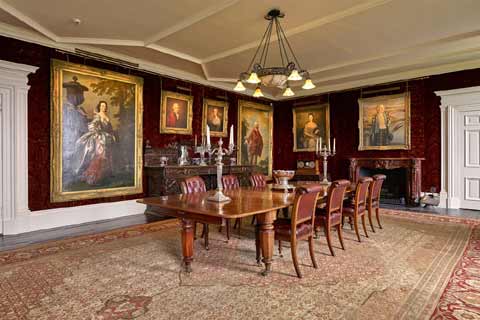 Inside Dunvegan Castle discover magnificent paintings and fine furniture. Amongst the various family heirlooms on display are Sir Rory Mor’s drinking horn and the Dunvegan Cup, dating from the middle ages, it was a gift to the Clan Chief from the O’Neils of Ulster in 1595.

There is also a small collection of Jacobite relics, including Bonnie Prince Charlie’s waistcoat, a lock of his hair and Flora MacDonald’s corset!

The most famous clan treasure to be found at Dunvegan is the Fairy Flag. Brought back to Dunvegan after the Battle of Stamford Bridge in 1066, legend has it that this is a gift from a fairy and has extraordinary powers to protect the clan. 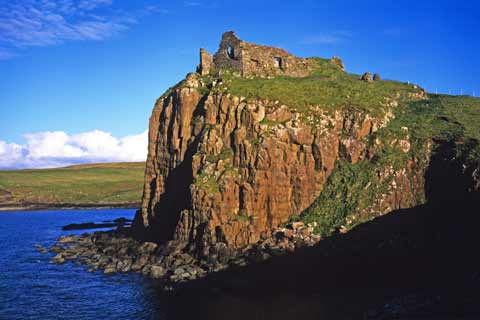 This ruined castle on the Trotternish Peninsula sits high above the seas of The Little Minch. Thought to date from the Iron Age it was initially occupied by the MacLeods of Skye, who entertained King James V of Scotland here when he visited Skye in 1540.

By the 1600s Trotternish had fallen to the MacLeod’s bitter rivals the MacDonalds of Sleat. For over a Century Duntulm was the seat of the Clan Chief, before being abandoned around 1730.

Duntulm is supposedly haunted by a nursemaid’s ghost who unluckily dropped the Clan Chief’s baby son from a castle window. In retribution for killing his son, the Clan Chief ordered her to be taken out into the Atlantic and set adrift in an open boat to meet her fate. 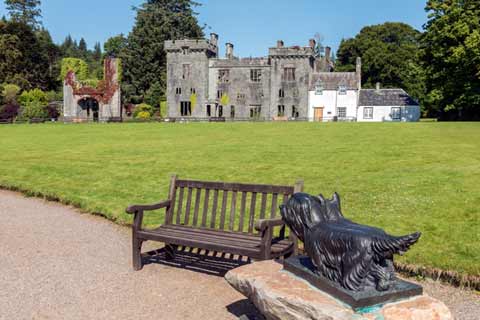 It’s thought that the mighty Clan Donald has had a connection to Skye since the 15th Century. The clan controlled much of Scotland’s west coast for almost 400 years from their base at Loch Finlaggan on Islay. The clan’s power was so strong during this time they were known as the “Lord of the Isles”.

The first record of a house at Armadale came in 1690 after it was destroyed fire, as retribution for the clan supporting the Jacobite cause.

When a manor house was built on the estate around 1790, the Clan Chiefs began to stay there. This was extended in 1815 when a much larger baronial-style castle was built close-by. It was rebuilt a few years later after a fire destroyed part of the building. When the MacDonald family moved out in 1925, it fell into disrepair. 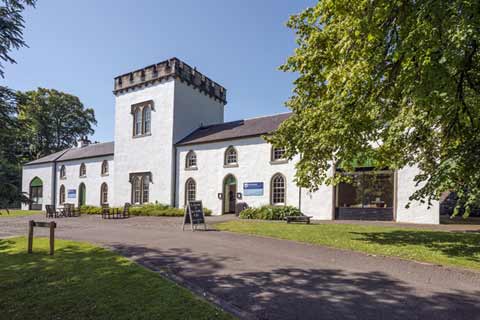 The Clan Donald remains one of the largest in Scotland, so when the Skye Estate came up for sale in 1971, a trust was formed to buy and secure the clan lands for future generations. Around half of the land was purchased, including the ruined castle, gardens and the original manor house.

Today, visitors can explore the beautiful gardens full of exotic shrubs, mature woodlands and enjoy the picturesque views over the Sound of Sleat. In the award-winning Museum of the Isles, Highland history is told through the Clan Donald story.

Caisteal Maol (Castle Moil) sits in the little village of Kyleakin, which means “strait of Haakon” in Gaelic. The Viking King, Haakon, gathered his vast fleet of longships here in 1263 before sailing on to his defeat at the Battle of Largs. The victory of King Alexander led to the Vikings conceding control of the Hebridean islands to Scotland. 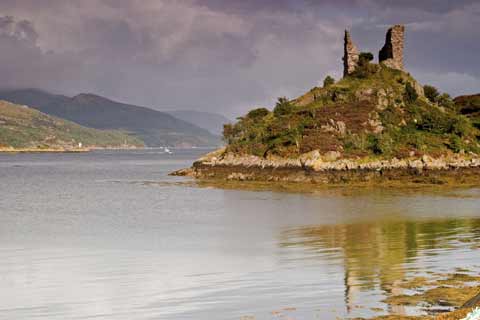 It is thought that a castle was built on this site sometime before the 10th Century by the Vikings and it became the home of a Norse Princess, known as “Saucy Mary”. She married the fourth Chief of the Clan MacKinnon, Findanus. Together, they had a very lucrative business extracting tolls from passing ships by running a heavy chain across the sound between the castle and the mainland.

A three-storey tower house was built on the Viking castle site in the late 1400s which became a MacKinnon stronghold. It was abandoned for more comfortable accommodations in 1601, and this structure is the one seen today, sadly in ruins.

Built atop a large rock overlooking Loch Eishort on the Sleat Peninsula, Dun Scaith was one of several defences built for the Clan MacLeod on Skye. The castle was built around the 13th Century and is surrounded by sea with almost sheer drops on all sides. 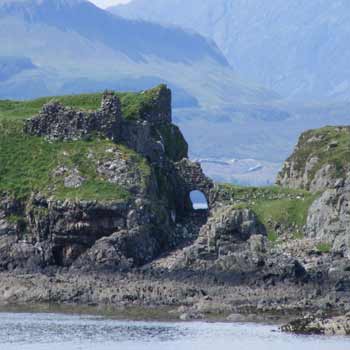 The natural defences of Dunscaith didn’t deter the Clan MacDonald, however, and they captured the Sleat Peninsula including the castle in 1435. Ownership of Dunscaith switched several times before being finally being held by the MacDonald’s.

According to Gaelic mythology Scathach, the mythical warrior queen had her base at Dun Scaith. Indeed the castle was named after her, Scathach means Shadowy and Dun Scaith, Castle of Shadows.

It was here that she trained young fighters in the martial arts to become fully-fledged warriors. One of her pupils was the legendary Ulster hero, Cuchulainn after whom the Cuillin Mountains are said to have been named.

Where is Eilean Donan Castle?

It’s true, iconic Eilean Donan isn’t on the winged isle, but it is so close and so famous it has to be included on our list. You will almost certainly have seen pictures of the castle sitting on its little island in books and tourist brochures. It’s also appeared in many movies including Highlander, Made of Honour and Kuch Kuch Hota Hai.

When was Eilean Donan Castle built? 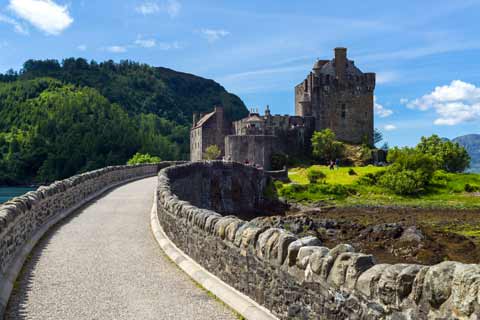 It’s thought the first castle was built on the Saint Donan’s Isle, hence the successor castle’s Gaelic name - Eilean Donan, in the 13th Century. It was built to protect the surrounding lands from Viking raiders.

Over the centuries the castle expanded until 1719 when it was occupied by Spanish soldiers and blown up by the Royal Navy during the 1719 Jacobite Uprising. For nearly 200 years a neglected stump was all that was left of the castle sitting on its little island.

In 1911 John Macrae-Gilstrap bought the island and set to work rebuilding the castle. It took 20 years, but the result of his efforts is quite simply magical, providing one of Scotland’s most iconic sights and certainly one of the best castles in Scotland.

The castle’s future is safeguarded by the Conchra Charitable Trust and, in day to day control, the hereditary Constable of the Castle remains a member of the Clan MacRae.

It’s easy to go to Eilean Donan Castle on a one day tour from Inverness. If you have more time available, a visit is possible on a two-day tour or three-day itinerary from Edinburgh or Glasgow.

Unfortunately, Skye has been off-limits recently. With better times just around the corner, it’s time to plan your trip and prepare to get the very best from your “Skye time”.

Check out our range of amazing tours to Skye here and let us introduce you to the real Scotland.