11 Castles near Edinburgh to visit

There are many things that Edinburgh is famed for. The ancient castle that has towered over the city for centuries is probably top of the list. It is less well-known that many castles near Edinburgh can be explored easily on a day trip from the city.

This blog will look at some notable strongholds and less famous fortresses to add to your bucket list. If you plan a castle stay, we’ve also got some luxury castle hotels to consider too. 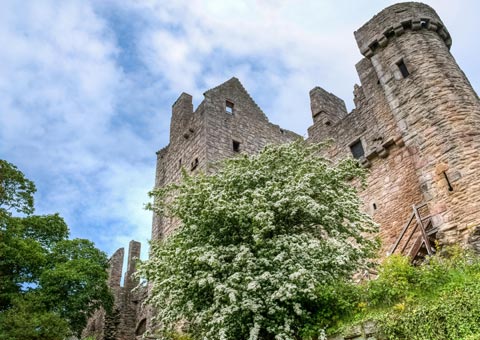 The original L-shaped tower house was expanded in the 1600s and 1700s.

Mary, Queen of Scots, is said to have been a frequent visitor to the castle as the owner, Sir Simon Preston, was a loyal supporter. Mary had him appointed as the Provost of Edinburgh, but he betrayed her. In 1567 he was her first jailer when she was detained in his townhouse before being transferred to Lochleven Castle the next day. 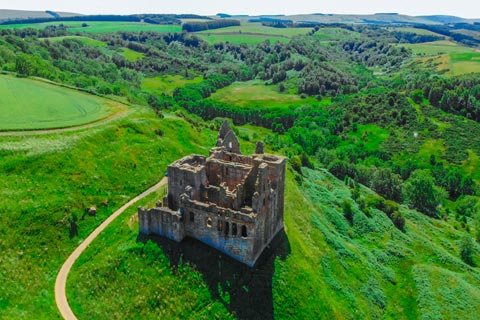 Rising magnificently from the surrounding countryside, Crichton Castle’s incredible ruins were once home to two of Scotland’s most notorious and ambitious families, the Crichtons and the Bothwells.

King Robert III awarded the barony of Crichton to John de Crichton around 1370 and the tower house of the castle dates from this time. Two hundred years later, an elaborate façade was added to create a more contemporary profile.

The beautiful castle ruins near Edinburgh have attracted many fans, including Sir Walter Scott and the famous artist JMW Turner.

This hidden gem was once a luxurious and sophisticated residence. Today it’s a captivating museum devoted to the style of the Victorian and Edwardian era. 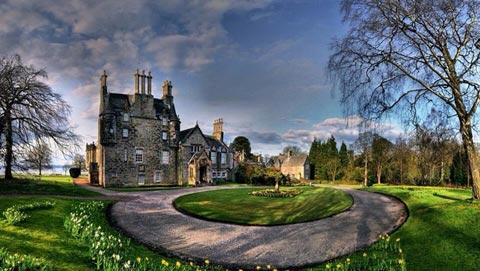 A colourful owner was the banker John Law, who became Comptroller General of France. Whatever fiscal wisdom John Law possessed, it didn’t extend to his personal finances. He was declared bankrupt and died penniless in Venice in 1729.

The last private owners, Mr and Mrs Reid, bequeathed the house and its contents to the people of the city of Edinburgh in 1919, on the understanding that it should be left untouched.

Situated amongst the farmlands of East Lothian, Dirleton is considered to be one of Scotland’s most picturesque villages, enhanced by the romantic ruins of Direlton Castle. 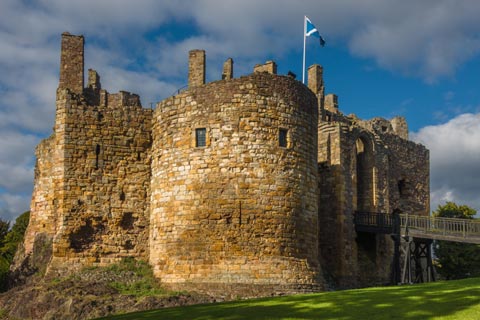 For 400 years, three noble families were connected with Dirleton. Each left their own stamp on the fortress.

The first owners were the de Vaux family. During their ownership, Dirleton was captured by King Edward I in his role as the “Hammer of the Scots”. After changing hands several times, control of the castle had fallen to the Haliburtons by 1356. They rebuilt the castle to include a great hall, family chapel and a grim pit prison.

The castle was protected by a deep moat, at least 50 feet wide; the entrance was approached across a movable wooden bridge and defended by two portcullis and two massive wooden doors. Despite this protection, the forces of Oliver Cromwell lay siege to Dirleton in 1650, which ended in the castle being no longer capable of military use. 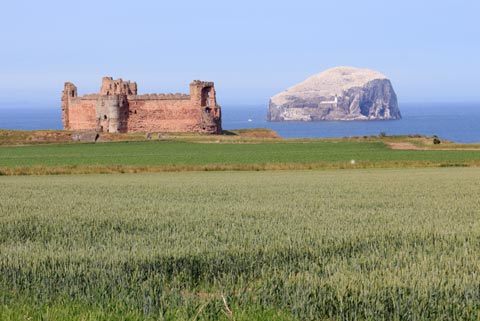 A mighty ruined stronghold on a rugged clifftop, rose-red Tantallon was the fortress of the fierce and unruly ‘Red Douglas’ family.

Tantallon was built by William Douglas in the mid-1300s and was passed down through the dynasty for the next 300 years. The powerful house of Douglas often clashed with the Crown, and the castle was the subject of a siege by Kings James IV and James V.

In 1651 Tantallon was attacked by the forces of Oliver Cromwell, under the command of General Monck. They caused so much damage that the castle was abandoned.

The village of Blackness was once an important port on the Forth Estuary serving the Royal Burgh of Linlithgow. The castle was originally built as an impressive residence for the Crichton family but has been a Royal Castle, ammunition depot and state prison. 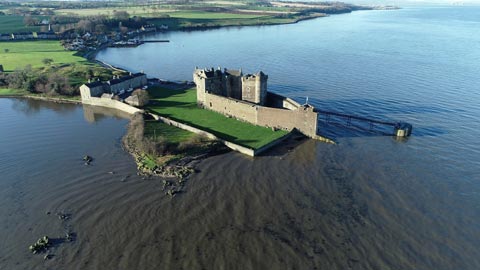 After the Act of Union in 1707, Blackness was one of the four key Scottish fortresses kept permanently staffed at full military strength.

Surrounded on three sides by water, Blackness Castle has the nickname of “The ship that never sailed”, due to its maritime-inspired profile.

Fans of the popular Outlander TV series will recognise the castle as the setting for Black Jack Randall’s Fort William headquarters. 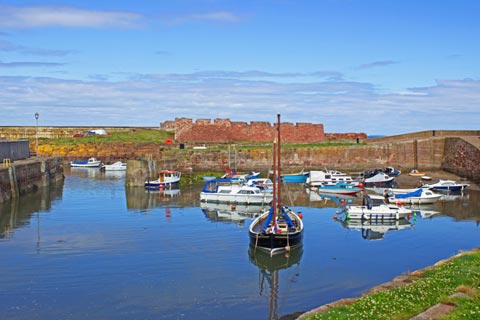 The remains of the once-mighty castle dominate the entrance to Dunbar’s harbour. It’s thought the earliest parts of the stronghold date from the 12th century, however there was probably a fort on the site well before then. The town gets its name from “dyn barr”, which means “the fort at the point”.

Over the centuries, the castle was fought for by the Scottish and English armies and changed sides several times. One notable skirmish occurred in 1338 when the English attacked the castle. The defender was the formidable “Black Agnes”, Countess of Douglas. She and her troops held out for 6 weeks until relief supplies arrived by sea and the English withdrew.

Dunbar Castle featured in the tragic reign of Mary, Queen of Scots twice. She first came here in 1566 after the brutal murder of her secretary and confidant, David Rizzio. The following year, she spent 10 days at Dunbar after the mysterious explosion that killed her husband, Lord Darnley.

This 15th-century castle sits in the Hopetoun Estate. It has found fame as the filming location of “Lallybroch”, the home of the Frasers in the popular Outlander TV series.

The castle’s interior is derelict, but there has been refurbishment work to the outside of the castle in recent years.

Stay in a castle hotel near Edinburgh

This 15th-century keep is an impressive tower house with 12 luxurious bedchambers. It’s a popular wedding and event venue that can cater for up to 85 guests.

Located a short distance from Edinburgh, Borthwick Castle can count Mary, Queen of Scots, Oliver Cromwell and Sir Walter Scott as past guests. 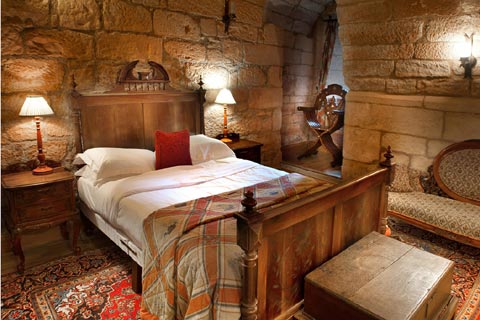 Sitting on the banks of the River Esk, 13th-century Dalhousie Castle offers 29 distinctive bedrooms, a fine dining restaurant and extensive spa and leisure facilities. Located within acres of wooded parkland, guests can partake in archery,  clay pigeon shooting and falconry all within the hotel grounds.

Dalhousie is reputed to be Scotland’s oldest inhabited castle and was the seat of the Chief of the clan Ramsay.

The noted architect James Playfair designed this grand country house for Henry Dundas, 1st Viscount Melville. The house is located in a woodland estate on the outskirts of Edinburgh, near the town of Dalkeith.

Melville Castle has 32 comfortable bedrooms, a brasserie restaurant, and a vaulted bar.

Travel with Scottish Tours to discover Scotland’s historic castles and palaces, both large and small. We have a range of tours from Edinburgh, Glasgow, Inverness and London that cover our beautiful country.

If you want the explore the best castles near Edinburgh, choose a Scotland Tour from Scottish Tours.