Full of inspiring scenery, the West Highlands and Scottish Islands are the birthplace of the Scottish nation. It’s an area steeped in history, mystery and tradition and it’s where ancient kings were crowned and buried.

Discover romantic Scottish islands, dramatic mountain scenery and historic castles that capture the very essence of our nation on a tour to Scotland’s West Highlands and Islands.

Where Are the West Highlands, Argyll and Scottish Islands? 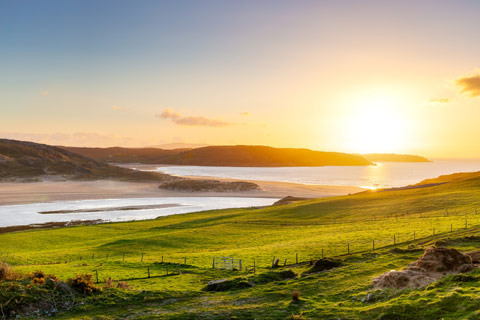 Argyll is located in western Scotland and is broken up by long sea lochs, mystical islands and rugged mountainous terrain. The cluster of islands scattered throughout the area is known as the Inner Hebrides.

The West Highlands, Argyll and Scottish Islands are home to vibrant waterfront villages like Tobermory and bustling seaside towns like Oban as well as breathtaking ancient castles and abbeys.

The region spans from the borders of East Dunbartonshire in the south to Fort William in the north.

For any hiking enthusiasts, the West Highland Way offers a great challenge. This 96 mile walk will take you right through some of the most beautiful natural scenery and incredible mountain views Scotland has to offer.

To truly experience this region, some island-hopping is a must.

The Isle of Mull provides wild scenery, picturesque bays and panoramic views of the incredible Ben More -- the highest mountain on the island.

You can then climb aboard a ferry to the tranquil and sacred Isle of Iona. Discover the famous Benedictine Nunnery, the beautiful Iona Abbey, and the Graveyard of the Kings.

To the north lies Fingal’s Cave on the uninhabited island of Staffa. The cave is made of symmetrically joined basalt columns that make it a natural acoustic wonder. It really is something to see and hear!

Regardless of where you visit in the West Highlands and Argyll, you’ll find the very best of Scottish culture and history.

Today, Scotch Whisky is enjoyed in 175 countries throughout the world and has been an industry over 500 years in the making. 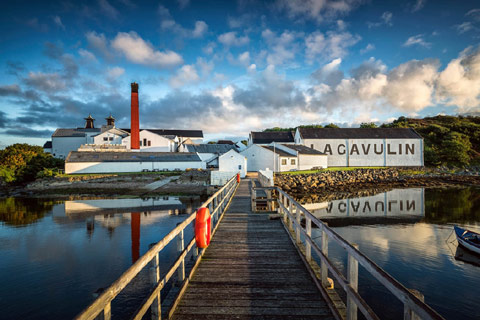 The whiskies produced on the Scottish Islands all have very different characteristics, which come directly from the individual personalities of the islands themselves.

For example, Islay is home to eight active whisky distilleries producing smoky and peaty malts including famous brands like Ardbeg and Bruichladdich.

There are plenty of opportunities for connoisseurs to sample the very best of Scottish whisky in the West Highlands and Scottish Islands. Have a wee dram on us!

The Western Highlands and Inner Hebrides are steeped in history. In Kilmartin Glen you can admire primitive rock art and stone monuments. There’s no other place in Scotland with such a large number of prehistoric carved stone structures.

Just a short distance away, at Dunadd Fort it’s possible to trace the birth of the Scottish nation. The area of Dunadd was the capital of the Kingdom of Dál Riata --  the original Scots.

For anyone wild about wildlife, a trip to Argyll and the Islands will have you up close and personal with Scotland’s nature. 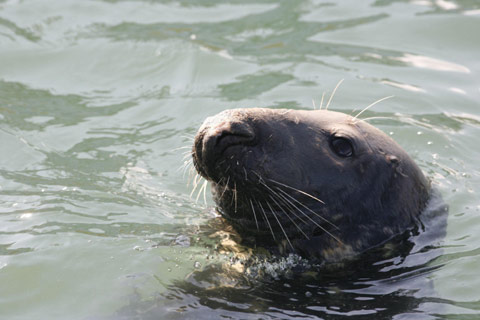 The area contains seven National Nature Reserves. The mild climate of Scotland’s West Coast, thanks to the influence of the Gulf Stream, means it’s home to many exotic and rare plants, which flourish in the region’s public gardens and parks.

Venture a little further out to the Scottish Sea Lochs and you may spot minke whales and large sea birds like gannets and eagles.

Unmissable Attractions in the West Highlands, Argyll and the Islands

There’s no shortage of indoor and outdoor activities on a Scottish Island and West Highland tour.

Whether you want to explore historic castles and gorgeous stately homes or take a walk through glens and valleys, there’s something for everyone.

The West Highlands, Argyll and the Islands are home to a large number of ancient Scottish castles and Victorian manor houses. Here’s a few of our top picks: 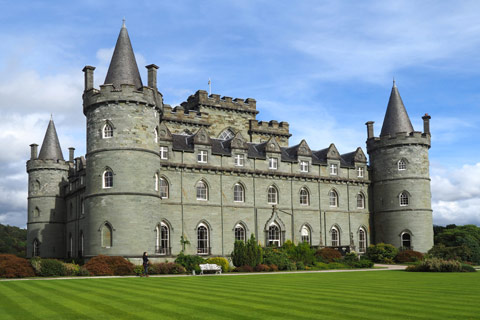 Like something from a fairytale, this beautiful castle sits on the shore of Loch Fyne - Scotland’s longest sea loch. It’s one of the earliest examples of Gothic Revival architecture and since its construction in the 18th-century it’s been the home of the Duke of Argyll.

Fans of the hit TV show Downton Abbey may recognise Inveraray Castle from the 2012 Christmas episode.

Located on the Isle of Mull, the magnificent and picturesque Duart Castle sits proudly on top of an outcrop at the edge of Duart Bay. Today, the 13th-century castle is open to the public. Afternoon tea, delicious home-baked goods, and locally sourced or grown produce make for an experience to remember. 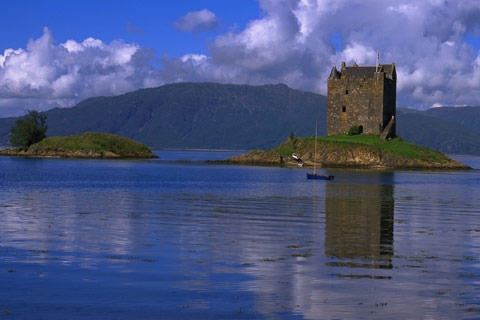 This 15th-century tower sits grandly on a tidal islet on Loch Laich and can only be reached by boat. On a day where the tide is very low, the islet is accessible from the shore. The structure was originally a small fort, but the Stewart monarchy constructed the castle as it looks today.

This 19th-century gothic mansion is famous for its extravagant interiors and expansive landscaped and wild gardens. Open to the public seasonally, Mount Stuart House displays cutting-edge art exhibitions as well as a variety of events and performances. Perfect for visitors looking to steep themselves in Scottish art and culture.

Located just 3 miles northeast of Oban, this partially ruined 13th-century historic structure is one of Scotland’s oldest stone castles. Built by the MacDougall Lords, Dunstaffnage Castle guarded a strategic vantage point in times of war. Legend has it that a ghost known as “Ell-maid of Dunstaffnage” still haunts the castle to this day.

The stunning Hill House was built in 1904 and designed by the famous Scottish architect and designer Charles Rennie Mackintosh. The interior is beautifully detailed with furniture and fixtures that are said to reflect the different feelings and experience of each space.

Containing the oldest surviving barracks on the British mainland, Kilchurn has served as a fortress as well as a  comfortable residence of military forces throughout history.

The now ruined castle was built in 1440 by the Breadalbane family and overlooks stunning views of Loch Awe, complete with a mountain backdrop.

Explore our in-depth guide on planning the perfect trip to the Isle of Mull here.

Explore the Hebridean island known for being home to more whisky distilleries than any other Scottish island. Each distillery produces a distinctive malt savoured by connoisseurs around the globe. Islay is the southernmost island of the Inner Hebrides. 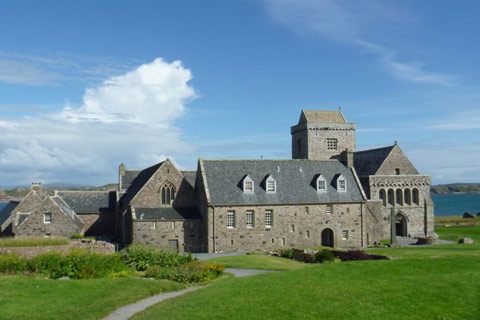 The island is also thought to be the resting-place for 48 Kings of Scotland. During your visit, don’t forget to visit the stunning Iona Abbey.

Located just north of Mull, this small island is religiously symbolic in Scotland. In 563AD, St Columba landed on Iona and brought Christianity to Scotland for the first time.

This colourful and busy little harbour is the main town on the Isle of Mull. The bright and vibrant buildings dotted along Main Street are home to some excellent shops, restaurants and boutiques. Soak up some real Scottish culture with a trip to Mull Museum and the Tobermory Distillery. 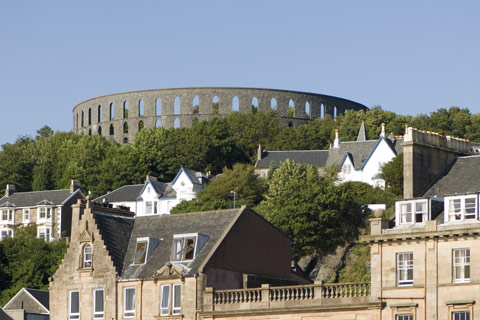 As a bustling Victorian seaport and fishing town Oban is known as the seafood capital of Scotland and Gateway to the Isles.

The picturesque town was built up around the local whisky and fishing industries, and the arrival of the railways in the 19th century allowed Oban to prosper.

Today, it’s a popular destination for spending time by the seaside.

Located on the western shores of Loch Fyne, Inveraray is a fantastic gateway to the rest of the Highlands and Islands. This former royal burgh is home to the awe-inspiring Inveraray Castle and Inveraray Jail.

Explore some of the most beautiful scenery, exciting wildlife, and richest history that Scotland has to offer.

Discover Argyll and the Islands