Whisky distilleries of Islay and Jura

The delightful Hebridean islands of Islay and Jura are home to no less than 10 working whisky distilleries. Thanks to the peaty water that is found on these islands the whisky has a distinctive flavour which makes them highly-prized by connoisseurs.

Using just three ingredients - malted barley, grain and water, experts distillers create the golden nectar which, in Gaelic, goes by the name Uisge Beatha, which means the water of life.

How do you pronounce Islay?

Islay is pronounced ‘Eye La’, with the emphasis on the first syllable. (You could think of it as ‘Aye La’ if you want to feel more Scottish). It’s an island on the west coast of Scotland, at the very south of Scotland’s Inner Hebrides.

Known as The Queen of the Hebrides, about a quarter of the population on Islay speak Scottish Gaelic. Islay and Jura are part of the Inner Hebrides group that also includes Skye, Iona and the Isle of Mull. 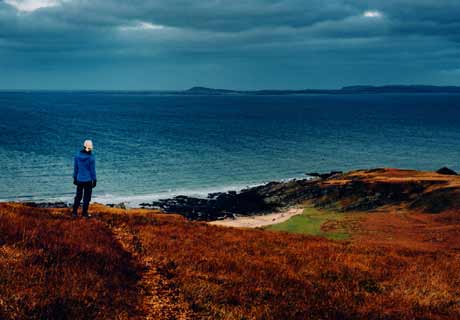 Like many Scottish islands, Islay is renowned for its friendliness, beautiful scenery and abundant wildlife, but its main claim to fame throughout the world is that this small Island (of 3228 inhabitants at the last count) is home to so many whisky distilleries.

Islay is the ideal location for distilling whisky, due to its fertile land which is perfect for growing barley, its abundance of pure water sources, and the peatiness of the earth, which is flavoured with salty and seaweedy tastes by the strong breezes that come from the coast.

Incidentally, it's Islay Whisky and, not Islay Whiskey. In Scotland, Canada and Japan, whisky is always spelt without the ‘e’, while in Ireland and the USA they prefer to spell it ‘whiskey’.

How many distilleries are there on Islay?

Here are the current operating Islay distilleries in rough order of age: 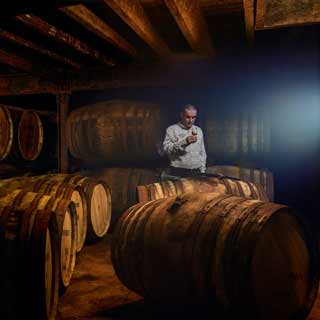 Opened in 1779, and the oldest distillery on Islay. The village of Bowmore is the capital of Islay and sits roughly in the middle of the Island. Bowmore whisky has distinctly peaty and salty flavours but is milder than the 3 southern malts: Lagavulin, Laphroaig and Ardbeg.

Opened in 1815, Ardbeg is one of the 3 southern whisky producers known as the Kildalton Distilleries. There is a fair bit of variation among the Islay malts, depending on their location on the Island.

The southern ‘Kildalton’ whiskies are Ardbeg, Laphroaig and Lagavulin. These Islay malts share similar characteristics, being very peaty and with an iodine, medicinal flavour.

While it’s true to say that these southern whiskies are some of the strongest in the world, other distilleries on Islay produce milder and less peaty whiskies.

Opened in1816, and definitely, one of the ‘love it or hate it’ Islay whiskies!

The strong peat and iodine flavours of this malt give it that characteristically medicinal taste. This is one of our favourites here, but it’s certainly not for everyone. 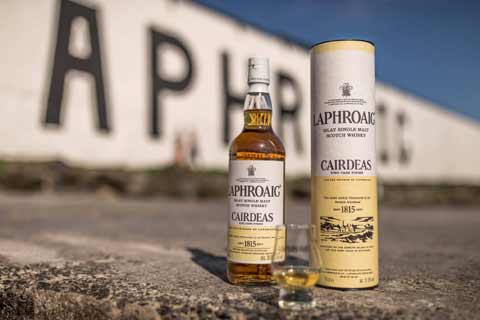 Opened in1815, Laphroaig (pronounced Laf-roy-aig) is one of the most intensely flavoured of all the Scotch whiskies, with similar peaty, briny, iodine tastes to Lagavulin. The 15-year-old Laphroaig is said to be Prince Charles’s favourite malt.

Opened in 1846. Pronounced Col-eela, the distillery is on the shore of the Sound of Islay, a mile north of Port Askaig. It produces a peaty whisky, with tastes of iodine and salt, but which is much more delicate than the southern whiskies.

Caol Ila produces more whisky than any other on the Island and is used in many blended whiskies, for example, Chivas Regal. 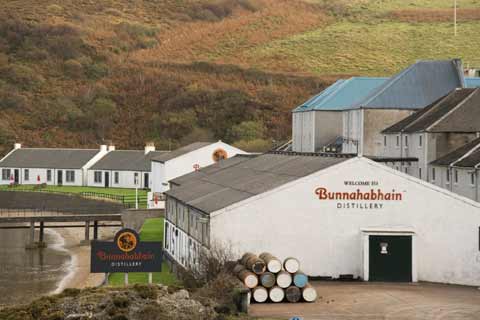 Opened in 1880. Pronounced Boon-a-havn, and a considerably milder whisky than the Kildalton 3. Bunnahabhain sits near the northeast tip of Islay with stunning views over to Jura.

This Islay Malt is not peaty, because the water used comes through limestone and is transported by pipelines to the distillery, so it doesn’t pick up any peat flavouring.

Opened in 1881, Bruichladdich (pronounced Brook laddie) is situated on the shores of beautiful Loch Indaal, and along with Bunnahabhain is considered to be a milder whisky than its southern neighbours.

Bruichladdich is one of only two distilleries that bottles its whisky on-site, the other being the relatively new Kilchoman Distillery. Bruichladdich also distils gin, of which more later. 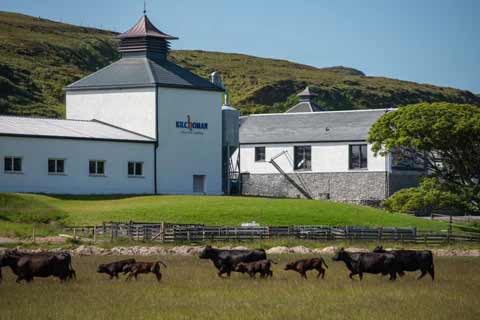 Opened in 2004, Kilchoman (pronounced Kil-ho-man) is a farm distillery on the west of Islay, near the Atlantic Ocean. It began producing whisky in 2005, and it was the first distillery to be built on Islay in 124 years.

Unusually, at Kilchoman all stages of the whisky-making process take place entirely on-site, including bottling, malting and even growing their own barley. A whisky tour at this distillery is an excellent choice, as you’ll see the entire process from grain to bottle.

State of the art Ardnahoe distillery opened in 2018 and is set in a magnificent location on the Sound of Islay between Bunnahabhain and Caol Ila, overlooking the Paps of Jura.

Don’t be fooled by the modern equipment though - this whisky is made using the same old traditional methods as the older distilleries.

How is whisky made? 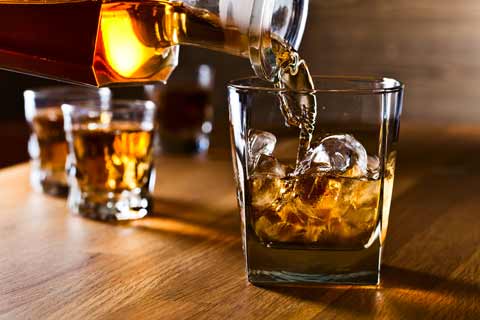 Well, we could describe the process step by step in great detail, but we think it’s far better and way more enjoyable to see it for yourself! You can take a tour of most of the Islay distilleries, and have a sample or two of the finished product.

And remember that each distillery produces a range of whiskies of varying ages and finishes, so you’ll want to try them all! If that's your plan then you should consider an Islay Bus Tour. Let one of our expert driver/guides take care of the driving while you savour the delightful malts that are produced on the Isle of Islay.

Are there any Scottish gin distilleries on Islay?

Indeed there are. If you’re a fan of the much-loved spirit made from juniper berries, you’ll probably know that Scotland has been producing excellent gins in recent years.

Some of these award-winning small-batch, craft gins include Isle of Harris Gin from the Outer Hebrides, Misty Isle Gin from Skye, and Caorunn Gin (pronounced Ka-roon), which is distilled in Speyside. Islay can boast two superb gins to add to the list. 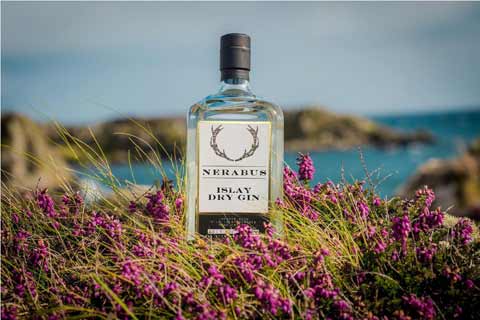 The Botanist at Bruichladdich

The Botanist is an Islay Dry Gin made at the Bruichladdich distillery. The unique flavours come from 22 locally foraged botanicals found growing naturally on Islay, combined with berries, seeds and barks.

Nerabus is a small, family-owned handcrafted Islay Dry Gin, made at Islay House in the small village of Bridgend. Its delightful taste comes from the infusion of wild Islay heather.

The Isle of Jura

A short ferry ride from Port Askaig is Jura, where George Orwell wrote his masterpiece 1984 at Barnhill, the remote farmhouse at the opposite end of the Island from the ferry terminal. If you’re a dedicated enough Orwell fan, you can make the trip to visit this ‘extremely unget-at-able place’. 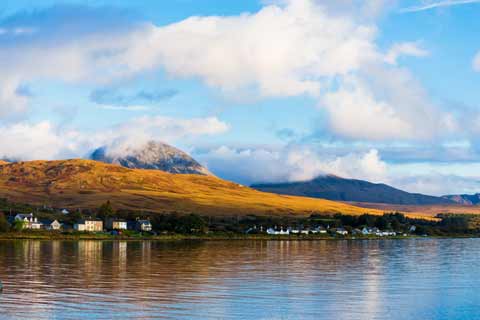 Really adventurous travellers can even take a private charter trip to see the treacherous Corryvreckan Whirlpool. Situated between Jura and the nearby Island of Scarba, this is the third-largest whirlpool in the world. George Orwell and his 3-year-old son almost drowned here, when they were shipwrecked on a rock while on a boating trip.

Jura is a mountainous and barren place with only one village, one road, one hotel and one pub, where there are more deer than people. It’s worth taking the ferry over from Islay not just to experience its bleak beauty and diverse wildlife, but also to visit its whisky and gin distilleries!

The Jura distillery in the village of Craighouse, produces a sweet and slightly smoky whisky, with traces of peatiness. The distillery was founded in 1810 but endured various periods of disuse until it was relaunched in 1963.

This award-winning craft gin is made at Ardlussa, a remote spot at the north of Jura. The dry gin is made from botanicals that are grown or foraged on the Island and started production in 2015.

Take an Islay coach tour with Scottish Tours. We'll introduce you to the many delights of this picturesque island. See carved stones and discover it's history and heritage at the popular Museum of Islay Life. Explore pretty villages like Port Ellen, Bowmore and Port Askaig. All this plus the tasty delights of the whisky industry are waiting to be explored.