10 Charming Villages to visit in Scotland

What are the most charming Scottish villages to visit? We’ve put a list together with our favourites which we think should be on your list.

Scotland is famous for its great cities, like Edinburgh and Glasgow, of course. But, if you want to experience authentic Scotland, you need to take the road less travelled and spend time in our small towns and villages. 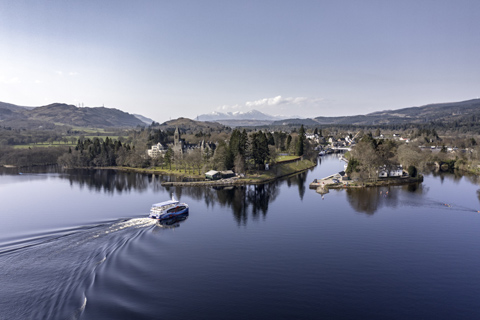 Located by the banks of Loch Ness this pretty village attracts visitors eager to catch a glimpse of the ever-elusive Nessie, the Loch Ness Monster. A popular activity is to take a cruise across the dark and mysterious waters, just in case she makes an appearance. After all, you never know your luck!

A Loch Ness boat trip is only one of the many things to do in Fort Augustus, though. Many visitors enjoy watching the pleasure cruisers navigate the staircase of five locks that is part of the Caledonian Canal. You can discover more about this engineering marvel at the Caledonian Canal Heritage Centre.

Foodies are spoilt for choice with several excellent restaurants being located in the village including the Lovat Hotel, which is famed for its contemporary “Taste of Scotland” cuisine. 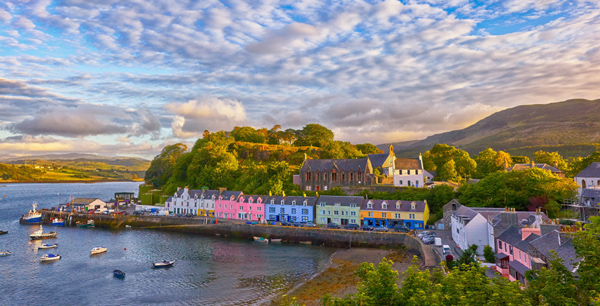 It might be slightly bigger than a village, but few will disagree that Portree is charming! Take a stroll down to the harbour, to see the pastel-painted buildings overlooking the natural harbour. Home to a small fleet of fishing boats, it makes a magical sight particularly as the sun is setting.

It is said that Portree was named Port Righ in Gaelic. It means King's Port after a visit by King James V in 1540. The Gaelic language thrives on Skye, and the innovative Aros Centre celebrates its essential role in the history and culture of the island.

Many tourists choose to stay in Portree as a base to explore the Isle of Skye. The fantastic scenery of the Trotternish Peninsula, where the attractions include Kilt Rock and the Old Man of Storr, is a popular Skye day tour. 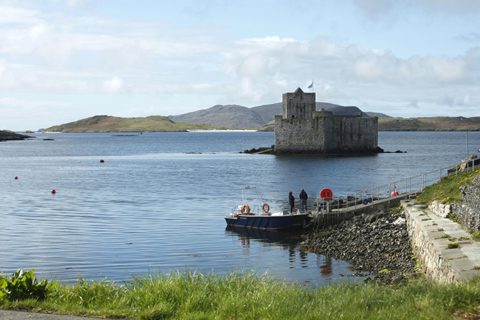 The village of Castlebay curves around a bay looking out to sea and is the principal community on the small island of Barra. Visitors arriving by ferry will pass Kismul Castle as they make for the pier. It has a dramatic position on a little island and was an ancient stronghold of the MacNeils of Barra.

Barra is one of most southernly islands that make up the Outer Hebrides, also known as the Western Isles. There are around 220 islands in the archipelago that sit in the Atlantic Ocean off the west coast of Scotland.

You can reach Barra by ferry from Oban or by flying from Glasgow. Planes land on the cockle beach, so the airport is one of the few where the tide controls the flight schedule! 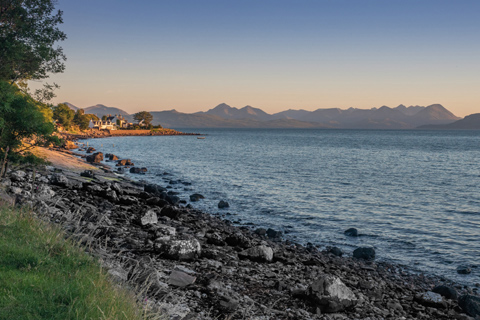 This is arguably the most remote village in Scotland and, strangely, also one of the earliest settlements. In around 673AD St Maelrubha established a monastery here. Sadly, no trace remains of this important religious centre nor the Pictish standing stones that once stood here.

Despite its isolated location Applecross is well worth a visit. The village, known locally as “The Street”, overlooks a beautiful bay with fantastic views over to the island of Raasay. Nature-lovers should look out for Golden Eagles which can often be seen in the skies above. Venture further, and you might be rewarded with a glimpse of a Pine Marten, one of Scotland’s rarest mammals.

If you’re feeling peckish check out The Applecross Inn, a popular watering hole with both residents and visitors. Locally sourced venison and seafood are popular choices on the menu washed down with a fine malt whisky or locally-brewed craft beer.

The most memorable way to reach Applecross is over the dramatic Bealach na Ba (known as the Pass of the Cattle in Gaelic).

The Applecross Pass route winds its way through a series of alpine-like hairpin bends to reach the Bealach na Ba viewpoint at 626 m which offers spectacular views over Loch Kishorn.

The best way to enter the attractive village of Dunkeld is to cross Thomas Telford’s bridge across the silvery River Tay. Look out for the beautiful “Little Houses”, they were built after the village was destroyed in the Battle of Dunkeld (1689). Another attraction is the Cathedral which has a tranquil setting next to the river.

Highland Perthshire is known as “Big Tree Country”, and a popular local walk follows a woodland path through giant Douglas Firs to the Black Linn Falls. The view of this spectacular waterfall has been an inspiration to many, including Wordsworth and Mendelssohn. 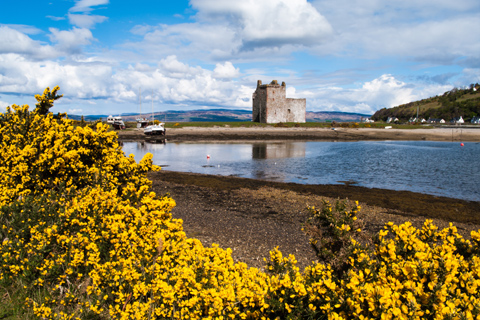 The Isle of Arran is the largest island in the Firth of Clyde and is known as “Scotland in Miniature”. At the north end of the island, looking out over the Kilbrannan Sound towards the Mull of Kintyre, lies Lochranza.

Here, overlooking the Bay, you’ll find the atmospheric ruins of a Castle that was probably built by the Lord of Knapdale in the 12th Century. It’s thought that this fortress inspired the creator of the Tintin books, Georges Remi (Herge)  to create the castle in The Black Island.

Lochranza is also the home of Arran Single Malt Whisky which is produced in a state of the art distillery using water from nearby Loch na Davie. The end product is exported to whisky fans all over the World.

How do I get to Arran?

There is a regular ferry service from Ardrossan on the mainland which arrives in the island’s main town of Brodick, which sits in the shadow of Goat Fell, the tallest peak on the island. A second ferry route operates from Lochranza to Claonaig on the Mull of Kintyre.

The cruise ships that call at the Highland port of Invergordon enter the sheltered waters of the Cromarty Firth by sailing through the narrows separated by two headlands known as “The Sutors”, the old Scots word for shoemakers.

At the bottom of the southern Sutor sits the delightful fishing town of Cromarty. Once a thriving herring port Cromarty has been left a legacy of beautiful Georgian houses, narrow winding streets and quaint Fishermans cottages.

One of Cromarty’s most famous sons was Hugh Miller, one of the founders of modern Geology. You can visit his thatched cottage and the Miller House, which tells the story of this 19th Century campaigner. 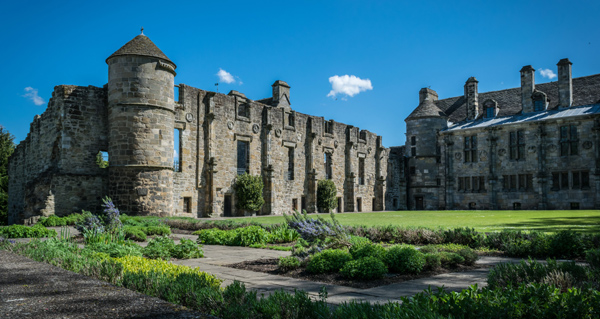 If you are planning to visit St Andrews and the East Neuk of Fife why not plan a stopover in delightful Falkland? Hidden away at the foot of the Lomond Hills lies the medieval village of Falkland, the favoured holiday destination of the Stuart Kings and Queens.

The sumptuous Royal hunting lodge is a stunning example of Renaissance architecture and sections date from 1501-1541. Several Scottish Monarchs stayed here, including King James IV and Mary, Queen of Scots. The Palace is famous for its beautiful gardens that contain the World’s oldest tennis court, built-in 1539.

More recently Falkland has found fame as a filming location for the Outlander TV series where it appeared as Inverness in the 1940s and 60s. Check out our selection of Outlander themed tours here.

Also located in the Kingdom of Fife is the Royal Burgh of Culross. This attractive village is also a filming set, and Culross Outlander locations include the notable Palace building, where Claire’s herb garden is located. The Mercat (market) Cross was transformed into Cranesmuir, the fictional village home of Geillis.

In real-life, this once-thriving port on the River Forth is a beautiful example of a 16th and 17th Century village. Take a stroll along the cobbled streets to discover the many old buildings with their quaint red-roofs and crow-stepped gables.

Sitting at the foot of a cliff looking out to the North Sea, Pennan is an attractive fishing village of white-washed cottages that became famous when it was used for the filming of the Local Hero movie in 1982.

Fans of the film can visit the village to have their photograph taken outside the traditional red telephone box and enjoy a drink at the Pennan Inn which both featured in the popular film.

Discover these delightful Scottish villages for yourself with Scottish Tours.