If you are lucky enough to attend a Royal Edinburgh Military Tattoo performance, it’s said you’ll never forget it. From the magical backdrop of Edinburgh Castle to the breathtaking displays of dancing, music and marching, the whole event is just spellbinding.

The Edinburgh Military Tattoo has been taking place for over seven decades and is a popular event during the Edinburgh Festival season each August. It also reaches a Worldwide audience when broadcast on television.

Discover the story of the Tattoo and what’s in store for its come back season with Scottish Tours.

What is Edinburgh Military Tattoo? 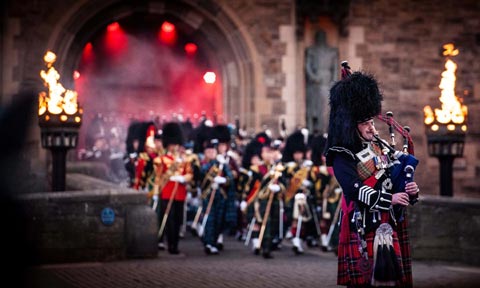 This iconic event, which takes on Edinburgh Castle esplanade, combines the stirring music of the military pipes and drums, colourful Highland Dancing, precision marching and fearless acrobatics in one spectacular show.

Around 200,000 attend the sell-out spectacle during its annual 3-week run and an estimated 100 million viewers worldwide watch the event at home on tv.

Staging this Edinburgh institution involves a cast and crew of more than 1,200, many of whom travel from overseas to perform in front of an enthusiastic audience. 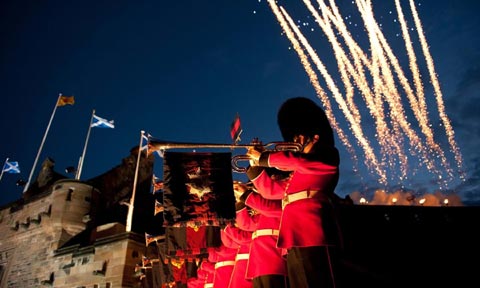 Firstly, what is a Tattoo? The origin comes from the 17th-century Dutch phrase “doe den tap toe”, which means “turn off the taps”. It was a signal played by buglers and drummers to tell the innkeepers to stop serving beer and for the troops to return to their barracks.

In 1945 a committee was set up to consider a proposal by the Austrian impresario Rudolf Bing. He had fled Nazi Germany and wanted to create a music festival to bring people and artists together after the horrors of World War 2.

In 1949, two shows took place as part of the Festival. The Ross Bandstand in Princes Street was the venue for “Something About a Soldier”, while on the Castle Esplanade, “The King’s Men” was performed before a standing audience of 2,500. Following the success of these two shows Edinburgh’s Lord Provost, Sir Andrew Murray, asked the military to present a show that would be a fixture of subsequent Festivals. The show was to be called “The Edinburgh Tattoo”. 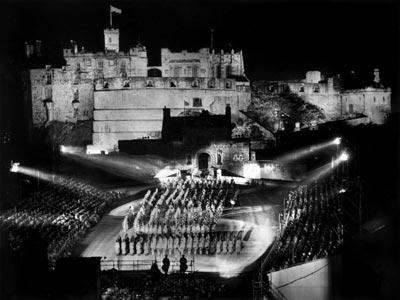 The first performance of the Edinburgh Military Tattoo took place on the Castle esplanade in 1950.

Over the 20 performances, it drew an audience of 100,000, including HM Queen Elizabeth the Queen Mother and Princess Margaret. They attended the final performance when Sir Thomas Beecham conducted the Massed Pipes and Bands.

The finale was a fireworks display, something which continues to this day.

In 2010 The Tattoo celebrated its Diamond Jubilee and became The Royal Edinburgh Military Tattoo, having been awarded the title by HM The Queen. 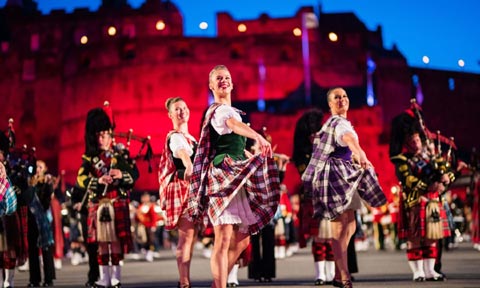 After a two-year gap, the Tattoo will return this year. The much-anticipated show will take place from 5 to 27 August 2022. The theme of this year’s event is “Voices” and includes performers from as far afield as The USA, New Zealand and Mexico.

A cast of 800 tattoo performers will provide an inspirational journey through music, dance and the spoken word.

A cast of 800 tattoo performers will provide an inspirational journey through music, dance and the spoken word.

This year, one of the top acts is the Swiss drumming sensation The Top Secret Drum Corps. First seen at the 2003 Tattoo, they have returned several times since to enchant audiences with their unique marching drum show.

Tattoo newbies are The United States Army Field Band, famed for their thrilling marching and musical routines. The United States Air Force Honor Guard Drill Team will make a welcome return this year. The official ceremonial unit of the Air Force is famous for its energetic displays of precision drill.

Of course, the crowd-pleasing Massed Pipes and Drums will be performing traditional Scottish tunes and famous military marches. The energetic Tattoo Dance Company and emotive Lone Piper will also feature.

The evening will end with a spectacular firework display which is extended for the late Friday and Saturday shows.

How to get tickets for the Edinburgh Military Tattoo?

As you might imagine, this magical show is a sell-out. With there having been no performances since 2019, demand is expected to be extremely high this year. If you’ve not already got your tickets, there are several ways to book your seats. 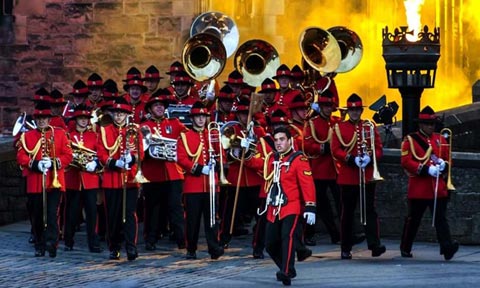 If you’ve not reserved your trip to Scotland yet, consider taking an extended tour. A good example would be the Best of Scotland 7 day/6 night tour which includes a two-night stay in Edinburgh with Tattoo tickets included. If you are jetting into London, check out the Best of Britain tour, featuring attendance at the Tattoo in the itinerary.

Short on spare time? The Edinburgh Tattoo Experience is a one-day tour to Highland Perthshire that includes Tattoo tickets and the chance to visit a whisky distillery. What could be a better introduction to Scotland?

Each performance lasts around 1 hr 40 minutes.

Visit Scotland and include one of our many iconic events in your itinerary. Scottish Tours makes it easy to discover the real Scotland.